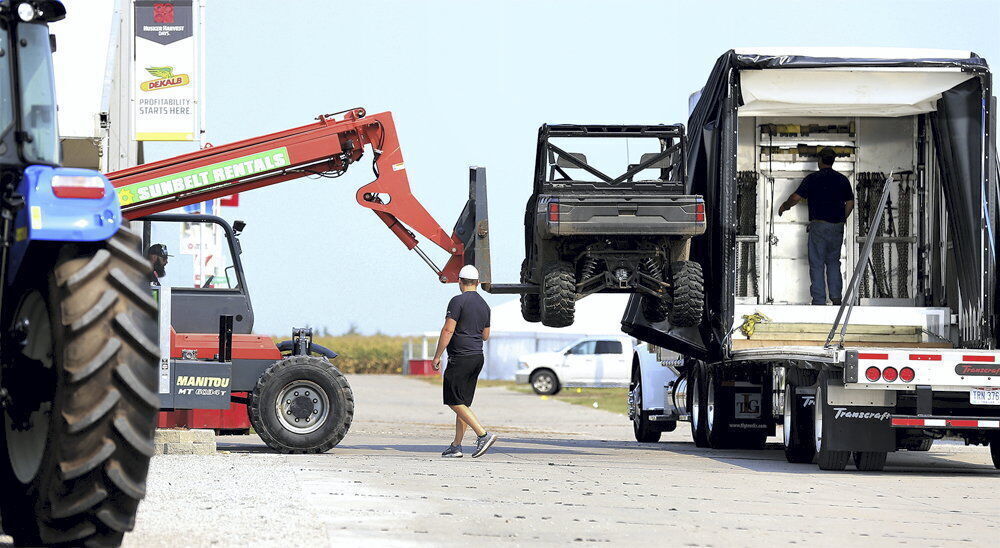 A forklift is used to unload a utility vehicle to be used by employees of Bayer Science during Husker Harvest Days, which starts Tuesday. Prep work at the site west of Grand Island started several days ago. 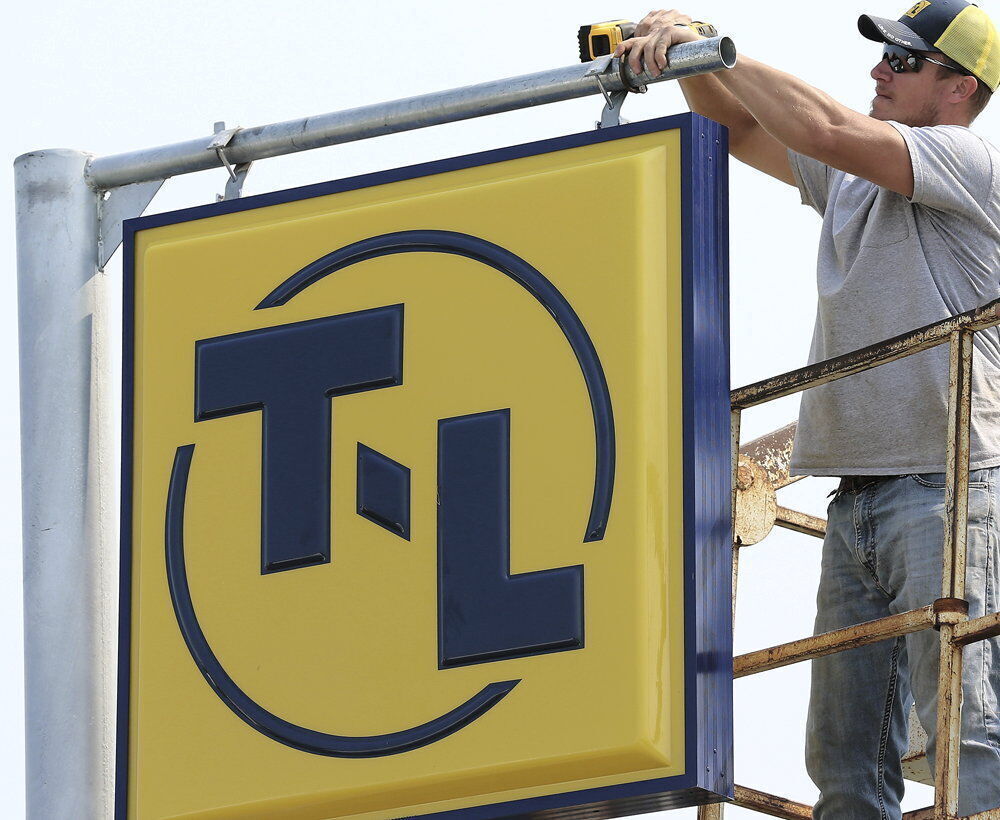 Jeff Peters with T&L Irrigation hangs a sign outside its Husker Harvest Days location on Thursday. Prep for the event started several days ago.

Husker Harvest Days is back Tuesday through Thursday after canceling its live show last year because of the COVID-19 pandemic.

More than 100,000 visitors take in the three-day agricultural show each year, but because of the public health directives to stop the spread of the pandemic, Farm Progress Events Manager Matt Jungmann said organizers had no choice but to cancel last year for the first time in its 44-year history in Grand Island.

“I think we did a great job of putting together a virtual event, but the thing that we learned from it is that growers really want a live show,” he said. “They want to kick tires. They want to interact. They want to to see it, touch it, feel it and a lot of this kind of stuff.”

Jungmann said this year’s show is still feeling the effects of the pandemic. While farm equipment manufacturing is up and running, many companies are reeling from a shortage or no supply of valuable parts for the equipment they manufacture, or not enough labor to meet consumer demand.

The exhibit field will be a little lighter when it comes to vendors as a result, Jungmann said. But the show will have only 8% of its exhibit space empty.

“Most of it is companies going from 10 lots to six lots or four lots or two lots because they don’t have the inventory to fill the exhibit space for the most part,” he said.

While Jungmann said Husker Harvest Days probably won’t be setting any records this year, they have learned some important things from their recent Farm Progress Show in Illinois.

“We had a great attendance, but it wasn’t any kind of record breaker,” he said. “There are still people who don’t quite feel comfortable getting out there.”

When opening day comes Tuesday, the Husker Harvest Days grounds look like a small Nebraska town in the middle of corn and soybean country, full of people and activities.

Jungmann said that even though the event will be pared down slightly from its normal 600-plus vendors, they are just glad to be having a live show again.

And this year there will be a lot of farm equipment that will be seen for the first time and will revolutionize how farming is done in meeting the challenges of the future, he said.

An unusual part of the show is the live demonstrations of farm equipment harvesting crops. Jungmann said farmers get to see and test these modern marvels and ask questions of the vendors, which helps them make informed decisions about the kind of equipment their operation needs.

“They are drying down fast and will be ready by show time,” he said of the Husker Harvest Days crops planted this year.

And when it comes to equipment demonstrations, there will be a futuristic demonstration with at least two autonomous machines in operation each day of the show.

Raven will have on display the OMNiDRIVE, which helps eliminate the need for the driver in the tractor pulling the grain cart to unload the combine on the go, and the OMNiPOWER, which is a self-propelled power platform designed to easily interchange farm implements like a sprayer or spreader to do multiple tasks around the fields without a driver.

Some Nebraskans are concerned about whether new tax proposals by the Biden administration could make it cost-prohibitive for families to pass on their farm, ranch or small business to the next generation.

The Dig Deeper Farm Tour will take place Saturday and give the community an opportunity to see where local produce is grown and connect with the producers by visiting any of the eight participating farms.

A forklift is used to unload a utility vehicle to be used by employees of Bayer Science during Husker Harvest Days, which starts Tuesday. Prep work at the site west of Grand Island started several days ago.

Jeff Peters with T&L Irrigation hangs a sign outside its Husker Harvest Days location on Thursday. Prep for the event started several days ago.