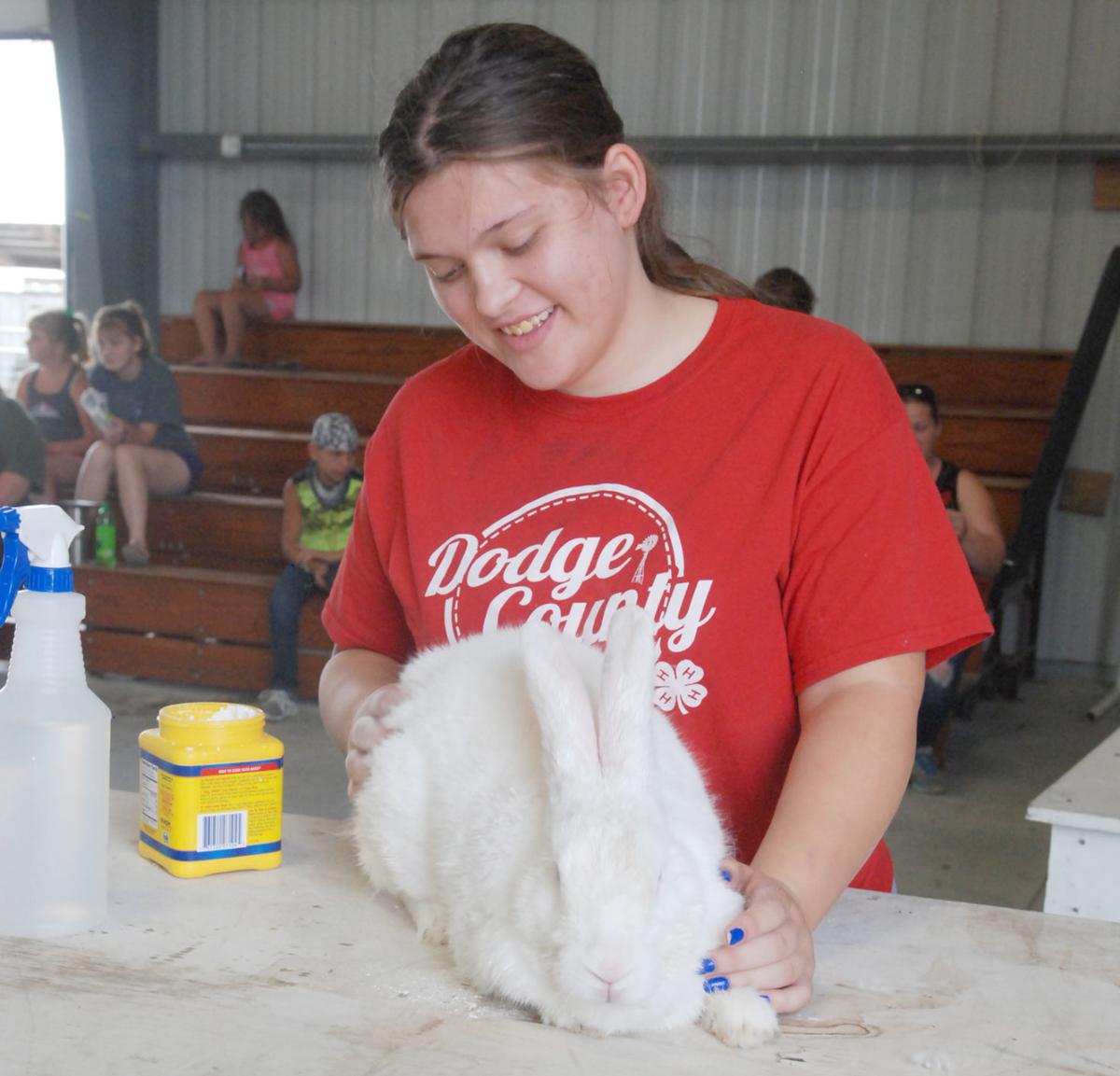 Rebecca Adams, 18, gently rubs some cornstarch into her White Flemish Giant Rabbit, affectionately named, Fat Man the Seventh. The girl was working with her rabbit on Friday at the Dodge County Fair in Scribner. Rebecca dreams of becoming an animator for Disney or Pixar someday. 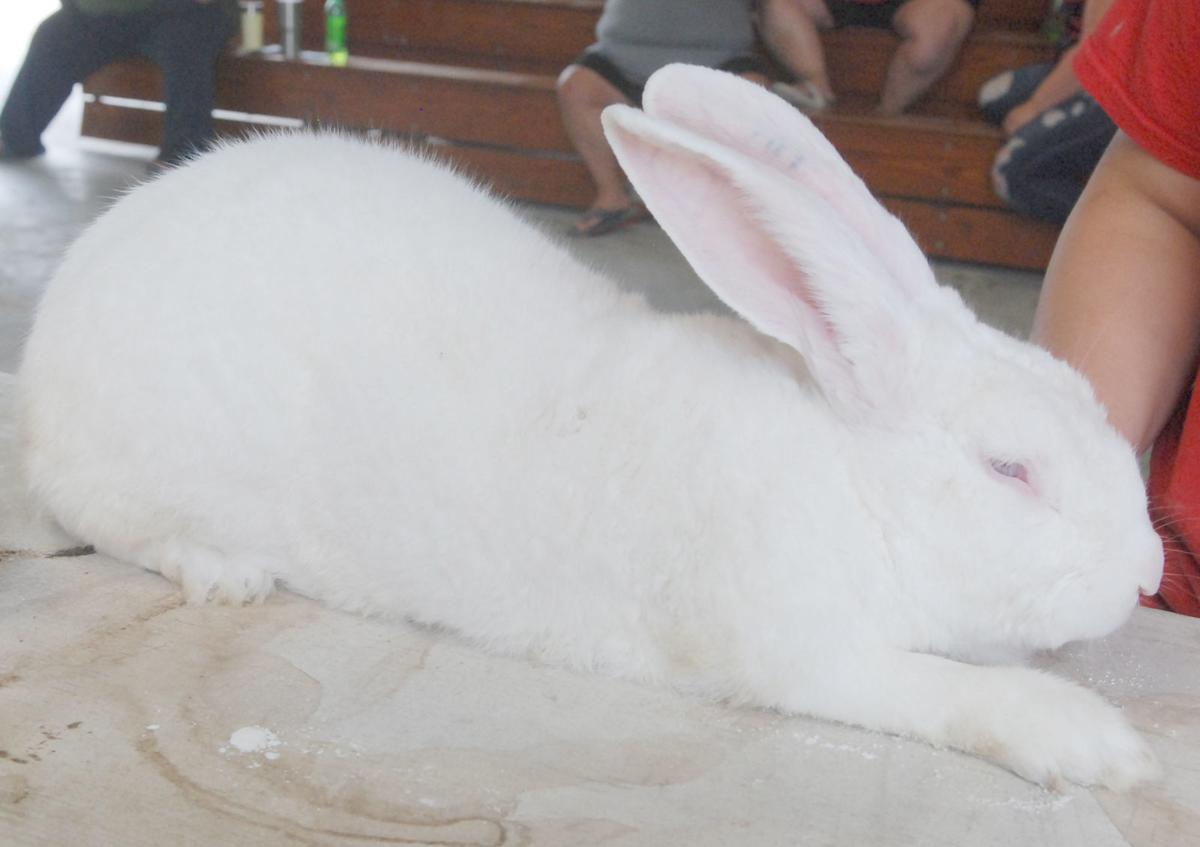 Fat Man the Seventh, a White Flemish Giant rabbit, relaxes on a table on Friday during the Dodge County Fair in Scribner.

How do you get an unsightly stain out of your bunny’s fur?

You might start by asking 4-H’er Rebecca Adams of North Bend.

A 2019 graduate of Logan View High School, Rebecca has been raising and showing rabbits since she was 8 years old.

So she knows how to handle little mishaps like one that occurred as she and other family members were preparing to go to the fair.

It happened after her dad, David, put another rabbit’s cage atop the one housing her large bunny, affectionately named, “Fat Man the Seventh.”

The bunny in the top cage had a little urinary accident leaving a not-so-nice stain on Rebecca’s rabbit.

“Oh great,” Rebecca thought. “I’m going to have to wash him.”

But then she remembered some research family members had done last year on how to make bunnies look white after their fur has been stained.

They found the answer online in what some might call a recipe.

Rebecca used that recipe on Friday.

She filled a spray bottle with a mixture that’s half water and half white vinegar. She sprayed that on the bunny’s fur and rubbed it in. Next, she put cornstarch on her fingers and rubbed that into the bunny’s fur. After the fur dried, she fluffed it with her hands.

“Then he’s soft and white again,” she said.

It didn’t take long for Rebecca to groom her rabbit, which said weighs between 25 and 30 pounds.

He’s a big bunny — but not as big as Rebecca’s dreams.

Rebecca plans to attend Wayne State College to study digital design with a minor in animation.

“I’d like to work for Disney or Pixar one day,” she said. “I’m hoping one day to have my own animated show.”

So what did she think of Snowball — the bad-attitude bunny in the animated movie, “The Secret Life of Pets”?

“It’s an interesting character; He reminds me of my female Polish rabbit,” Rebecca said. “She’s mean. She bites and scratches.”

By contrast, Fat Man is an obedient bunny.

“We can actually put him on the floor and he won’t go 5 feet away,” she said. “He’s a sweetheart.”

Looking ahead, Rebecca believes working with animals will help her in college.

“It teaches you responsibility and time management,” she said.

In the meantime, she hopes to do well in the rabbit show, set for Saturday.

Maybe someday, area residents will see her name amid the long list of artists in the closing credits of an animated film.

“That’s what I’m hoping for,” she said, “or in the beginning of the movie, if I make it to the director stage.”

Family travels to Germany to celebrate 400 years of history

It was a celebration of heritage — 400 years of family history.

The Lower Platte North Natural Resources District is working to help fortify the region against natural and human-caused disasters.

Jerry Getzfrid has volunteered at the Habitat HomeStore for years.

Improvements made to fairgrounds in Scribner

Visitors to the Dodge County Fair may notice some improvements.

If Claire Hein was nervous, she didn’t show it.

Event brings the fair to residents

At 74, nurse not ready to retire

Barbara Gehringer sees it as a soul-healing venture.

Tiffany-like lamps hang from the original ornate tin ceiling in the new gallery.

It’s not unusual to see cars in a church parking lot.

FHS grad to show her creations at Omaha Fashion Week

Lauren Glowacki always wanted to paint on a grand scale.

Rebecca Adams, 18, gently rubs some cornstarch into her White Flemish Giant Rabbit, affectionately named, Fat Man the Seventh. The girl was working with her rabbit on Friday at the Dodge County Fair in Scribner. Rebecca dreams of becoming an animator for Disney or Pixar someday.

Fat Man the Seventh, a White Flemish Giant rabbit, relaxes on a table on Friday during the Dodge County Fair in Scribner.