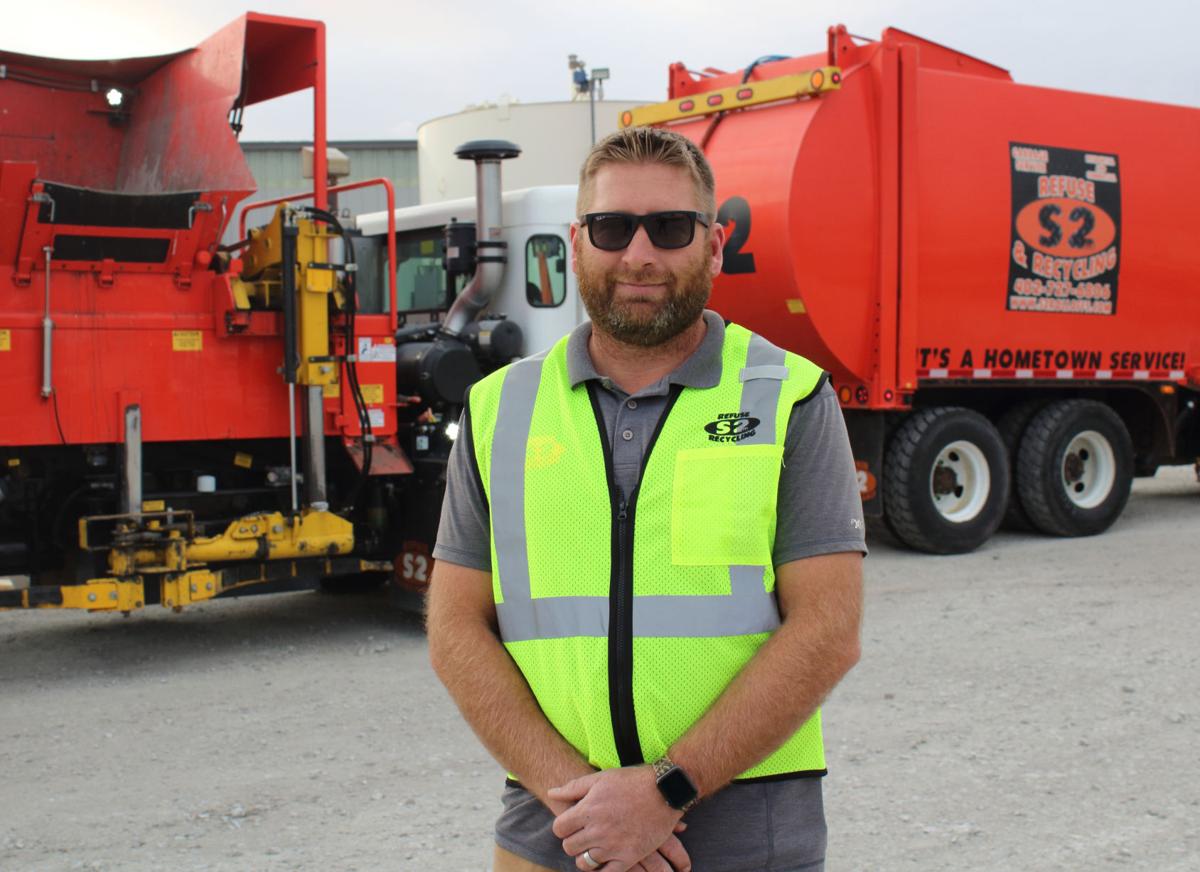 Mitch Sawyer, owner of S2 Roll-Offs and Refuse, stands in front of several trucks at 1720 Old Highway 8. He formed the company in 2007. 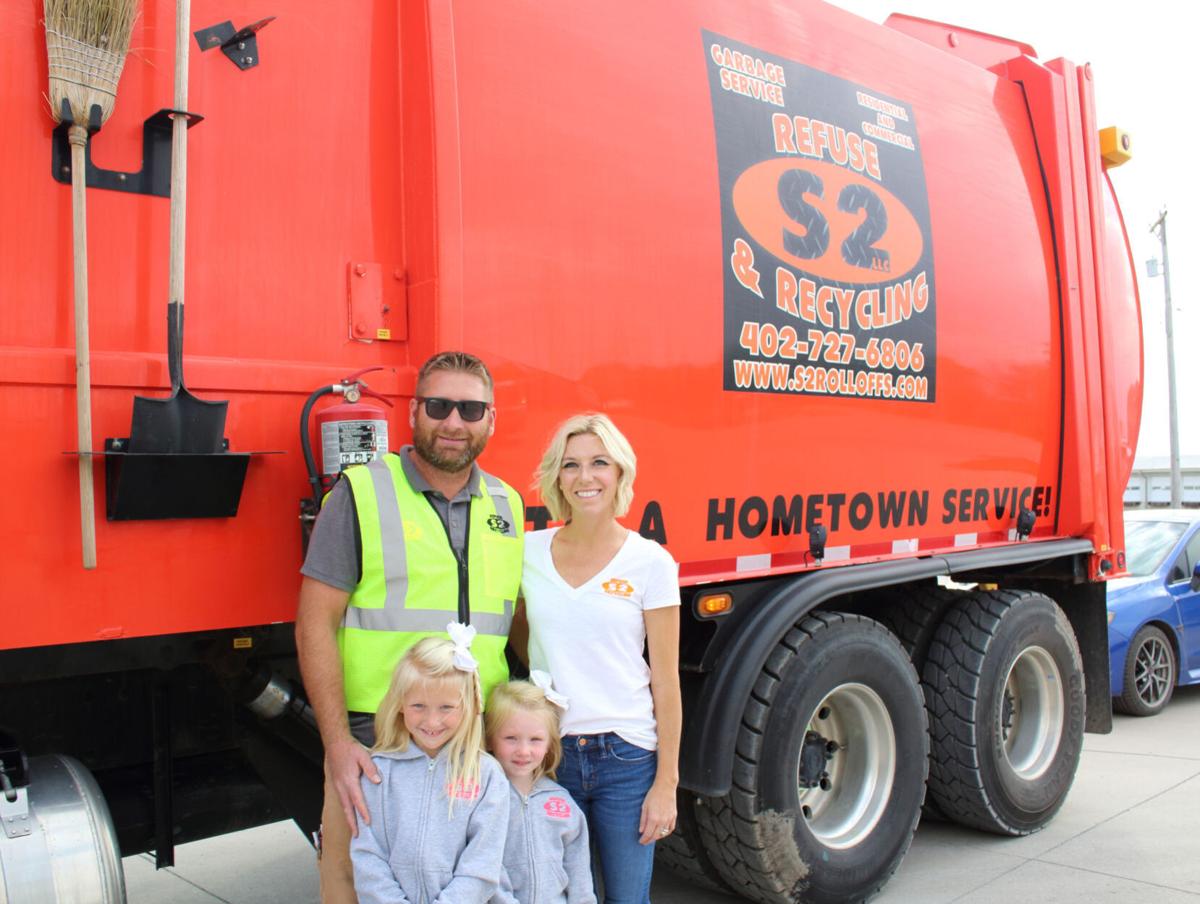 Mitch Sawyer stands in front of an S2 Roll-Offs and Refuse truck with his wife, Bridget, and their two daughters: 6-year-old Elliott, left, and 4-year-old Evaleigh. 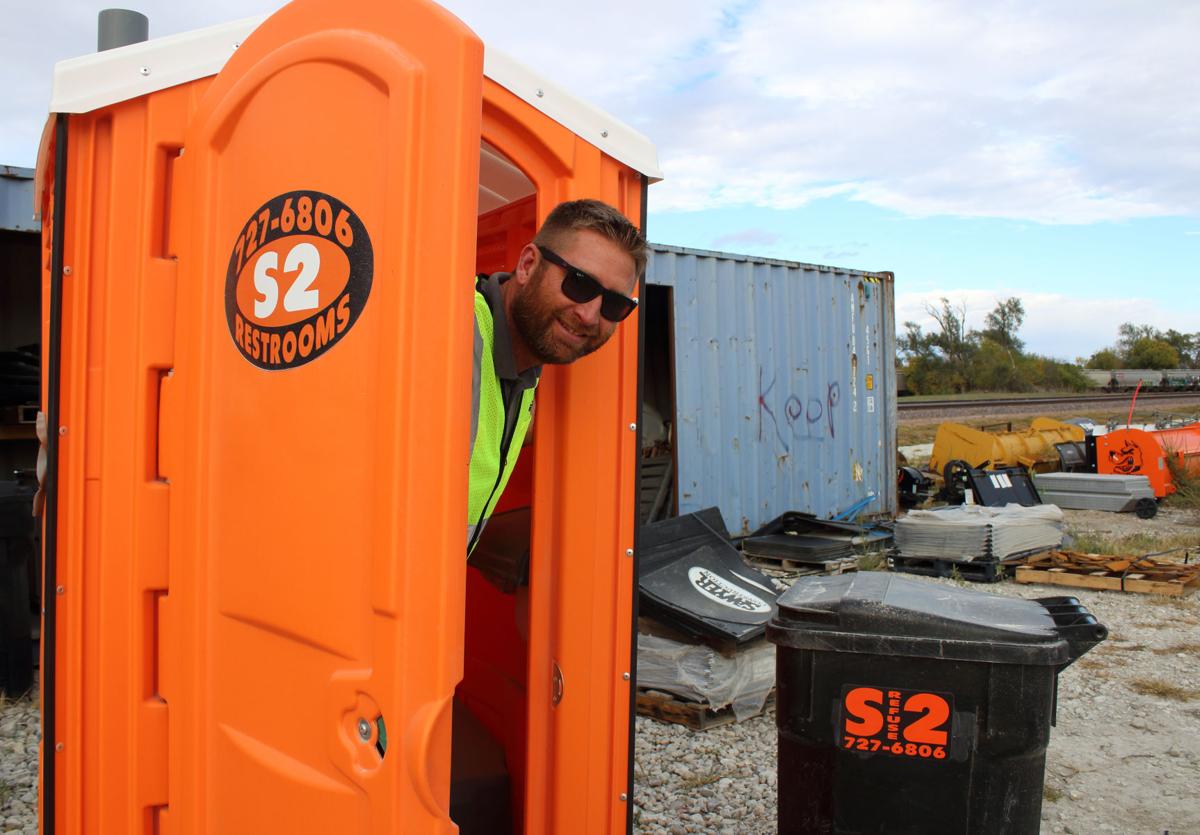 Mitch Sawyer, owner of S2 Roll-Offs and Refuse, peeks his head out of a porta-potty. The company started offering portable toilet services in 2018. 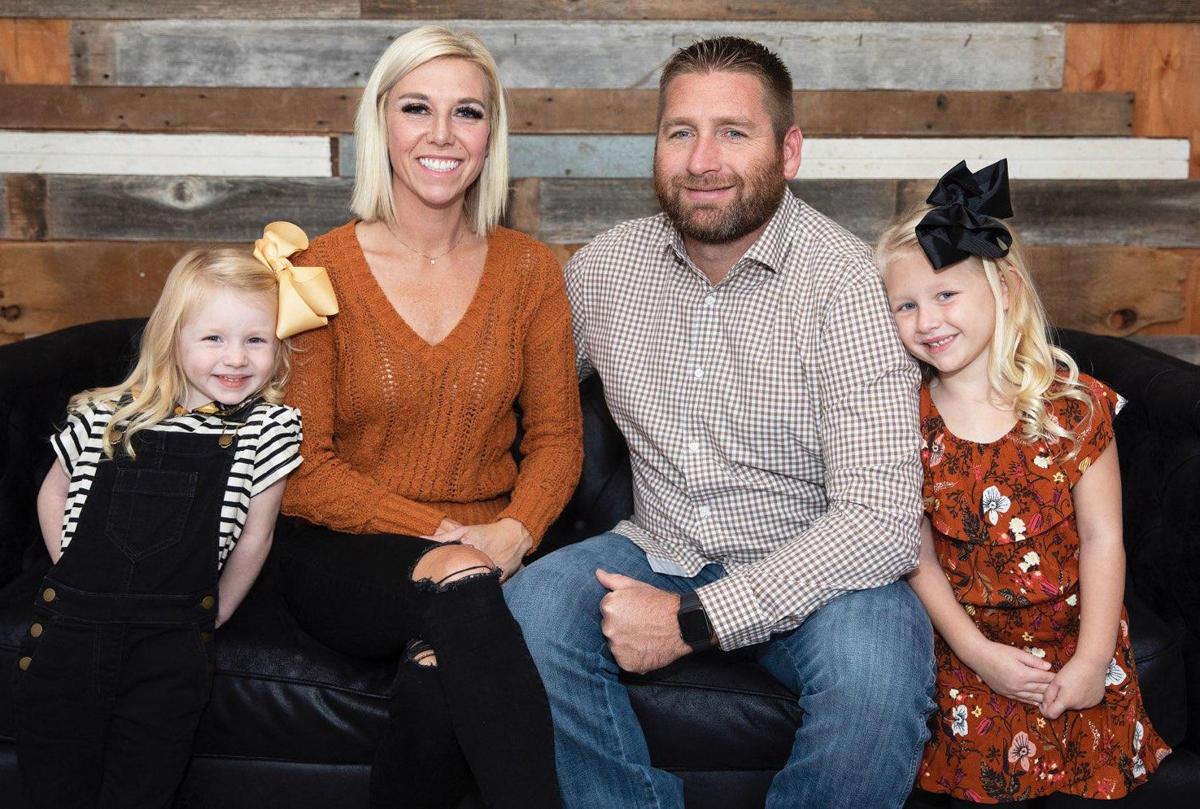 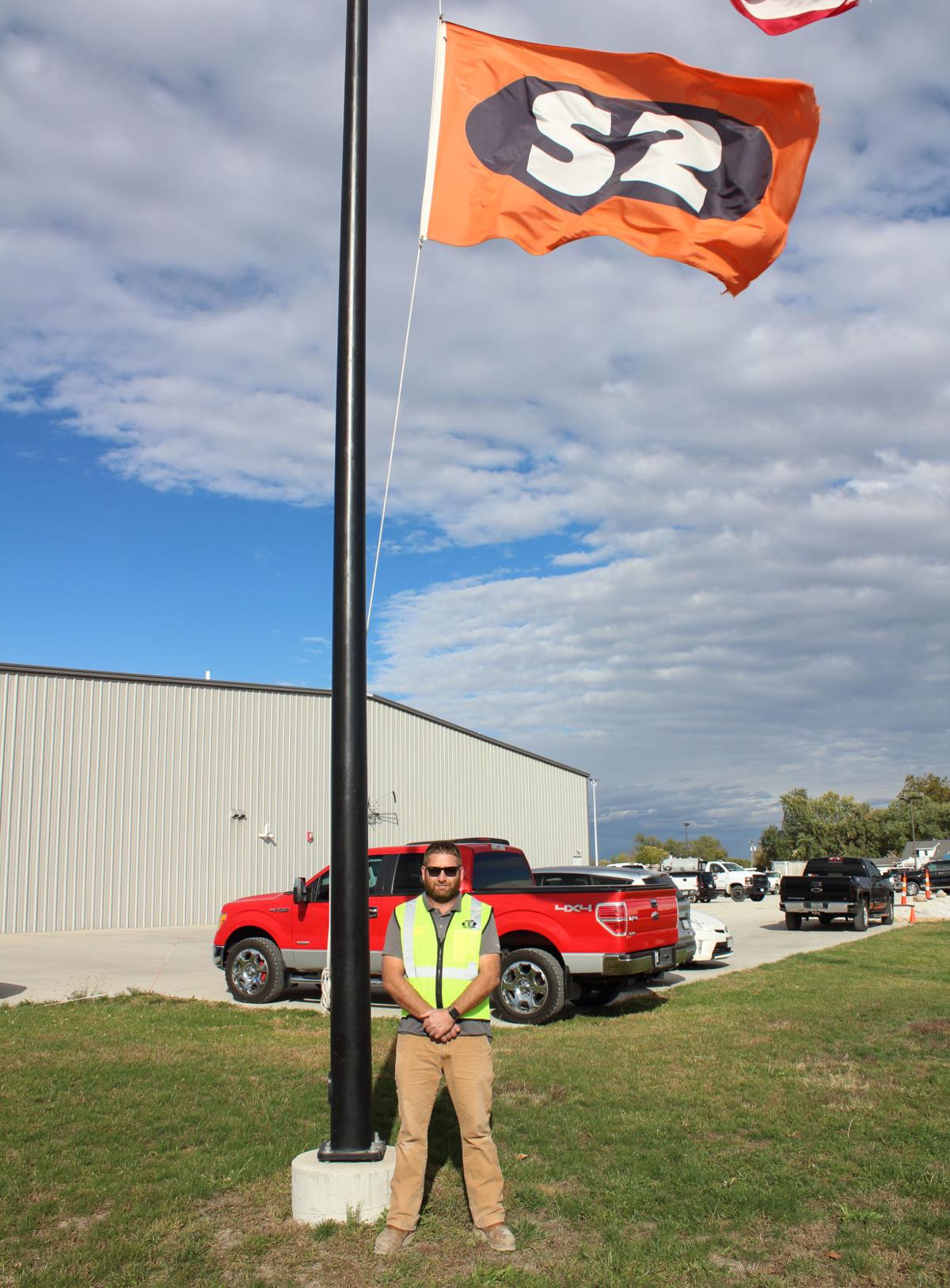 Mitch Sawyer, owner of S2 Roll-Offs and Refuse, stands in front of a flag for the company at 1720 Old Highway 8.

Editor’s note: The Fremont Tribune is publishing a series, “20 Under 40,” that shares stories of young professionals in Fremont under the age of 40. The series will highlight one individual on Page C1 every weekend until November 21. “20 Under 40” is sponsored in part by RTG Medical and the Fremont Chamber of Commerce.

Ever since he was young, Mitch Sawyer said he felt destined to go into the construction business.

His family business, Sawyer Construction, was where he would get his first look into the field.

Sawyer’s entry into the field led him to create S2 Roll-Offs and Refuse in 2007, which provided roll-off containers to construction projects. Since then, the company has expanded to other services, including garbage removal and truck repairs.

Born and raised in Fremont, Sawyer started helping his father, Tom Sr., and brother, Tom Jr., in junior high. Sawyer Construction was founded in 1955 by his grandfather.

“Granted, I was 12, 13, 14 years old, so I wasn’t really accomplishing much or doing a lot,” Sawyer said. “But I got a good start on that, I would say, in just being around the guys, the equipment, doing stuff.”

Sawyer attended Fremont High School, where he was mostly involved in sports like football, which he said taught him the importance of working as a team.

“I didn’t have much interest in going to college at first, and then by about the time I graduated, I spoke to a counselor at Metro [Community College],” he said. “And I did enroll in classes, and I’m glad I did.”

After graduating high school in 2000, Sawyer started attending school at MCC. There, he received a two-year degree in construction from the school in 2002.

“It was just a huge part of my life, my family’s life, being a family business,” Sawyer said. “So it was just kind of the path that I was maybe destined to go down at the time.”

Although he sometimes wonders what his life would have been like if he had received a little more schooling, Sawyer said he had no regrets in choosing his path.

“I’d like to say that, but if I would have tried harder there, I probably wouldn’t be in the position I am now, so it’s just kind of one of those things, it’s the path that I took,” he said. “So I guess to say, if I look back, would I change it? I don’t think I would. I wouldn’t at all.”

After graduating, Sawyer worked at Sawyer Construction and other small, short-term jobs.

“I also did try a couple different jobs that I’m glad that I did, because I just learned a lot,” he said.

But after working with Sawyer Construction for several years, Sawyer said he knew he needed a change.

“At that time, I think that there was a point in time where the family business, I think I needed to probably somehow make a move or kind of make my own way, so to speak,” he said. “And fast forward, that’s where S2 comes from.”

In 2007, Sawyer said he was ready to start his own business with his father and mother, Marka.

“I shouldn’t necessarily say, ‘Start my own business,’ because my parents helped me in a lot of ways and encouraged me and were 100% behind me,” he said.

“And it sat behind the Sawyer Construction shop for a couple of years,” he said. “So basically one day, I asked him if we could kind of start that business, if we could start it, so I would do it, and he would help me get off the ground.”

Sawyer and his father traded the truck for a newer one and had Timme Welding build the two their first roll-off container. In August of 2007, S2 Roll-Offs began with a truck and a box.

“And so it was kind of a slow start, but that’s kind of what I expected,” Sawyer said. “And we gradually added more boxes, the roll-off containers, as we were servicing construction companies for construction projects.”

As Sawyer and his father both had close connections in the construction industry, he said business was able to pick up for S2.

“We used the resources that we had from being in the construction industry to start our customer base, and through construction companies and manufacturing companies in Fremont,” he said. “So that’s how we started to grow it.”

GROWTH IN THE COMMUNITY

While S2 was previously limited to construction projects and manufacturers, the company started to expand as it started offering more services, including residential and commercial garbage and recycling pick-up in 2010.

S2 now has about 6,000 customers in the Fremont area. Since offering its collection services, Sawyer said S2 has tried to grow its customer base to areas outside of Fremont as well in its 30-mile radius.

“Then we’ve also added industrial waste removal and trash removal,” he said. “We now haul trash out of manufacturing plants in semi-trailers, rather than the smaller containers.”

In 2013, S2 was given the Business of the Year Award by the Fremont Area Chamber of Commerce. Two years ago, it started offering portable toilet services and launched S2 Repair and Maintenance, a truck repair facility.

S2 is also working on remodeling a new office in downtown Fremont. Working on the building, located at 550 N. Main St. in the old Buck’s Shoes location, has been a slow process, Sawyer said.

Currently, S2 has a total of 34 total full-time employees and eight part-time employees. One of those, Ben Hutton, has been with the company for almost two years.

“I was meeting with S2 through the chamber of commerce when I worked there,” he said. “And it just sounded like a really interesting, family-driven company and sounded like an exciting opportunity.”

Hutton, who works as chief business development officer, said Sawyer’s go-getter attitude was another factor to him joining the team.

“He brings a lot of enthusiasm to the table and makes those around him better, just because you see him working hard, and you want to do the same,” he said. “You see what success he’s had, and likewise, you want to emulate that, and he’s just a good person to be around.”

Sawyer has come a long way since starting S2. In 2012, he married his wife, Bridget, and the two have two daughters together: 6-year-old Elliott and 4-year-old Evaleigh.

From the very first day of driving a truck for S2, Sawyer said the company has helped him grow tremendously in overseeing, managing and motivating his team members.

Sawyer said he never tries to talk down to his employees, which he said has helped the company immensely.

“This job has taught me that if we can put the employees first, the staff first, then in return, there’s a good chance that they’ll put the customers first, which we hope has a positive effect on our customers,” he said.

In all that S2 does, Sawyer said it’s a team effort from its staff and employees.

“A lot of times, they’re asked to work long hours and go above and beyond, and they always do,” he said. “So I just want to stress that this is a team effort.”

As the company has challenges every day, Sawyer said he’s learned to accept those problems and not fight against solving them.

“We all make mistakes, especially me, so how do we embrace the mistakes and learn from them and not dwell on something that happened?” he said. “Basically, we learn from everything we can, because that’s what’s going to take us to the next level and help us grow.”

Hutton said he believes Sawyer has put his heart and soul into his work, as well as his family and friends.

“He’s put his all into it, and now, in terms of Fremont, it’s a large company,” he said. “And I just think that his leadership from that point, bringing people on and putting people in the right place and being able to oversee that just says a lot about his leadership capabilities.”

In serving the Fremont community, Sawyer said he felt proud to be a part of it with S2.

A Nebraska Extension webinar on Thursday at noon will review the current financial positions of farms included in Nebraska Farm Business Inc.’…

Hy-Vee, Inc. is introducing an automated cleaning system that fully cleans and sanitizes shopping carts after every use. By mid-November, more…

Goodwill Industries, Inc., serving Eastern Nebraska and Southwest Iowa, (Goodwill Omaha) has announced that it has been awarded the $70,000 Ka…

The 128-year-old Scoular on Friday debuted a new corporate brand identity, including a bold blue and gold logo and a redesigned web site. Scou…

Mitch Sawyer, owner of S2 Roll-Offs and Refuse, stands in front of several trucks at 1720 Old Highway 8. He formed the company in 2007.

Mitch Sawyer stands in front of an S2 Roll-Offs and Refuse truck with his wife, Bridget, and their two daughters: 6-year-old Elliott, left, and 4-year-old Evaleigh.

Mitch Sawyer, owner of S2 Roll-Offs and Refuse, peeks his head out of a porta-potty. The company started offering portable toilet services in 2018.

Mitch Sawyer, owner of S2 Roll-Offs and Refuse, stands in front of a flag for the company at 1720 Old Highway 8.