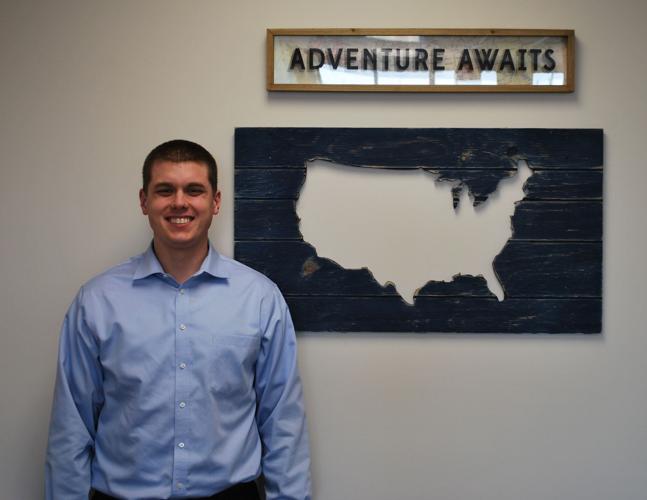 Joey Spellerberg, president of Moostash Joe Tours, took over the business from his father Jan. 1. 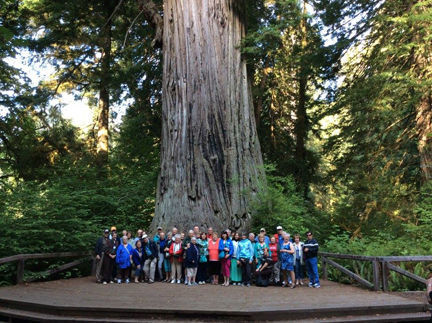 A group participating in the Great Pacific Coast Adventure tour pose for a picture beside a massive Redwood tree.

Group members from the Autumn in New England Tour take a moment to pause for a scenic photo.

Joey Spellerberg was immersed in the Moostash Joe Tour business long before he became the businesses’ second president in early January.

In fact, in 1990 when he was 6 weeks old his parents loaded him up in a car seat for the first-ever domestic tour to Pioneer Village in Minden.

At the time, Spellerberg’s father, Moostash “Joe” Spellerberg, was president of the operation, but his son was right beside him for all the adventures that took place.

During an interview in his office, Joey Spellerberg recalled his many experiences with the company growing up.

From scouting tour locations, to watching Old Faithful burst in Yellowstone National Park, to going to the Grand Canyon and seeing the White House in Washington, D.C., many life-long memories were made in his early years.

Now, since taking over the Family business on Jan. 1, Spellerberg looks forward to helping others make everlasting memories with the assistance of his brother John, vice president of the company.

Spellerberg knows he has big shoes to fill, but says he looks forward to helping the company continue to thrive.

“Johnny and I grew up in this business and we’re very passionate about it,” Spellerberg said. “We really just want to continue to see it serve many more people for another 40 years.”

Moostash Joe Tours was established in 1975, and for the next 15 years served as a tour company that served people wishing to travel abroad.

The first tour — in 1975 — happened because Moostash Joe was approached by members of the travel group Intertrav to promote a tour to Oktoberfest in Germany through his band, The Mootash Joe Polka Band.

“He promoted it through his band and he had a huge following with his band,” Spellerberg said. “He used his name for that and it worked. The first year they got 50 people to go, and the next year he got 150 and then in 1977 he got 300 for the same tour.”

And just like that, Moostash Joe Tours was born.

Throughout the following years, Moostash Joe searched for tours he felt people would enjoy. And as more people started going on tours, more locations continued being added.

People traveled to Czechoslovakia, Australia, China and all throughout Europe.

A following was created, and while business was thriving by simply designing tours abroad, Moostash Joe believed there could be an equal appeal for taking tours in the United States.

“He saw this opportunity to promote destinations around where we live,” Spellerberg said. “He already had a following of loyal customers and clients, so I think it took off pretty quickly once he decided he wanted to pursue that idea.”

Since taking on domestic tours, Spellerberg said there has been a complete 180-degree turn in the numbers of people who travel domestically versus abroad.

From 1975-1990, 95 percent of all customers traveled to foreign countries. Now, the number has flip-flopped, with 95 percent of people traveling in the United states.

In its 40 years of business, Moostash Joe Tours has booked more than 100,000 reservations and served more than 30,000 tours, information on the company website says.

Spellerberg attributes much of the company’s success to treating people the right way.

The company slogan, “More for Less,” is just as true today as it was four decades ago, he said.

“Our goal is always to give you the best tour for the least amount of money,” Spellerberg said. “That is our mission, when we work with our suppliers — our hotels and restaurants — we will try to work our best to get the price down as low as possible to where it is affordable for anyone to go on any of these tours… we think it is so important for our people to get out and experience the world, because there is so much to see out there.”

Spellerberg said that while taking over as the company’s leader has been a lot of work, he has been having a blast sitting in the captain’s chair.

He said he and his brother want to continue doing everything in their power to honor and recognize the legacy their father created.

At 82 years old, Moostash Joe finally stepped down from the business he created from the ground up, but Spellerberg said he will always have an impact on the business.

“Just because he retired doesn’t mean that anybody will forget what he has done,” Spellerberg said. “I always say that his name is on the sign outside and that isn’t going anywhere. We have the utmost respect for dad and what was already established for us. It’s a big responsibility for me, and its something I feel every day, because I want to maintain and continue what was already established.”

COVID-19 sparked the steepest and deepest job losses Nebraska has seen since the Great Depression, but Nebraska employment has finally rebounded to pre-pandemic levels.

The unemployment rate rose to 2.4% in October, up from 2.2% in September and the same as it was a year ago.

Why you should pay attention to bonus offers from banks

Why you should pay attention to bonus offers from banks

Save time and money during the holidays with these apps

Save time and money during the holidays with these apps

Joey Spellerberg, president of Moostash Joe Tours, took over the business from his father Jan. 1.

A group participating in the Great Pacific Coast Adventure tour pose for a picture beside a massive Redwood tree.

Group members from the Autumn in New England Tour take a moment to pause for a scenic photo.