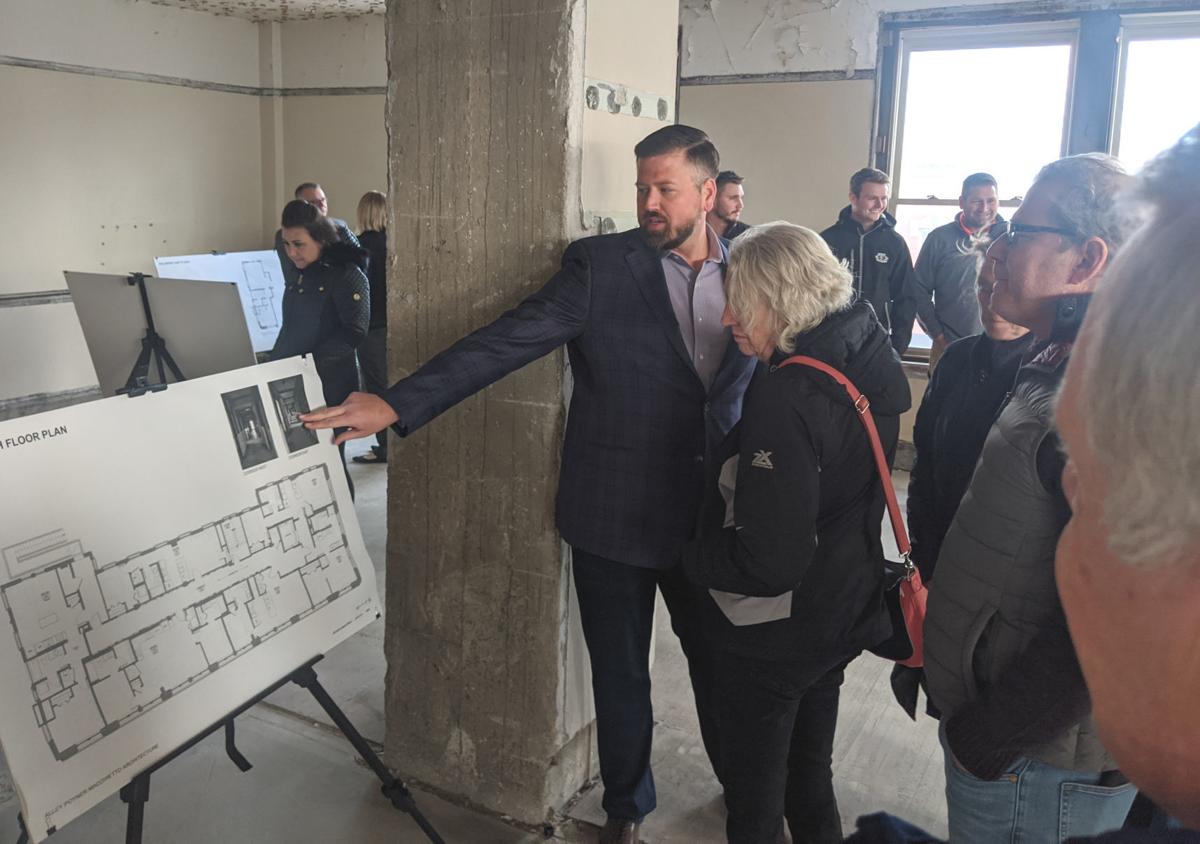 Lofts @ 505 developer Ryan Durant shows members of the Fremont community plans for the apartment layouts at the 505 Building Friday afternoon. The project, which is expected to finish in April 2021, will add 24 apartments to the building. 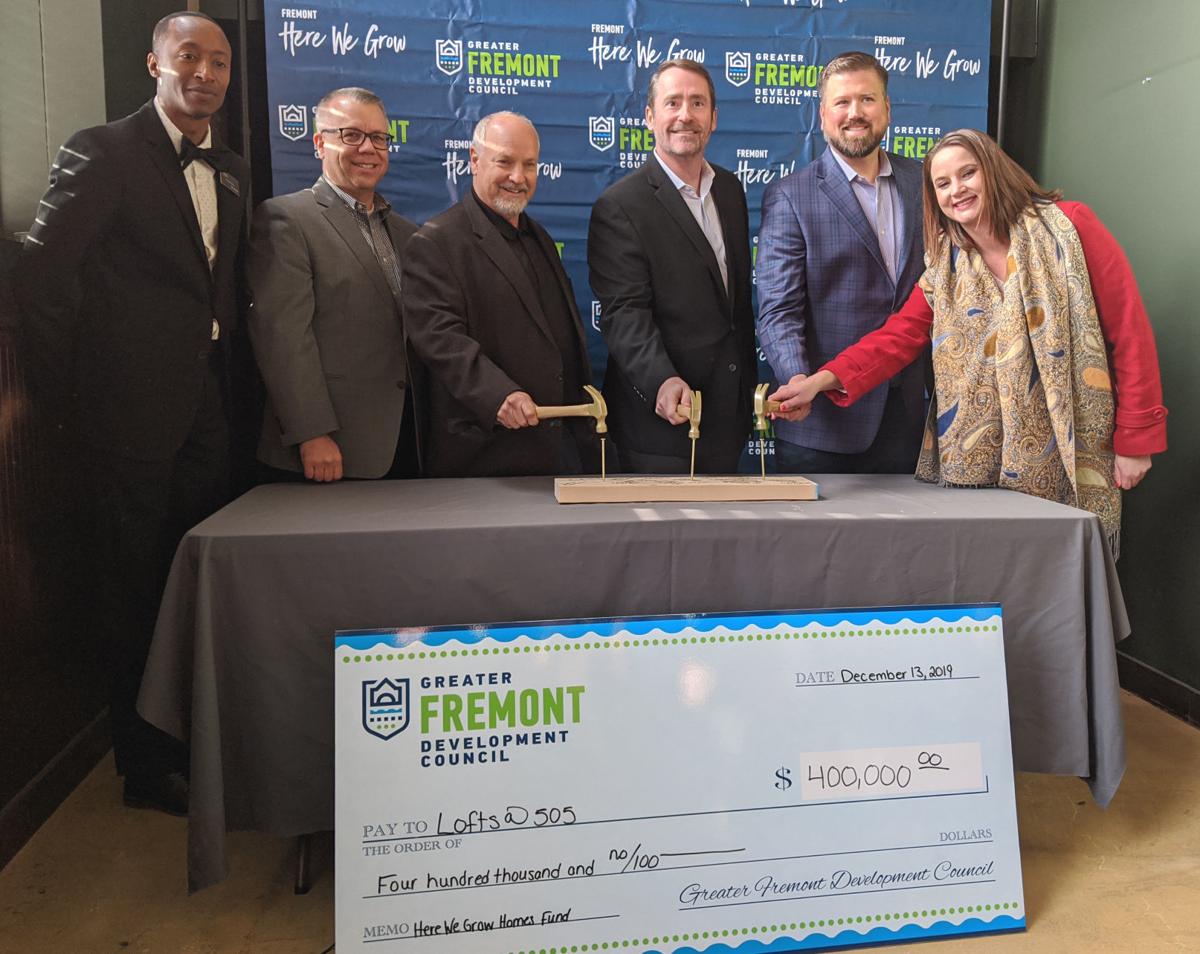 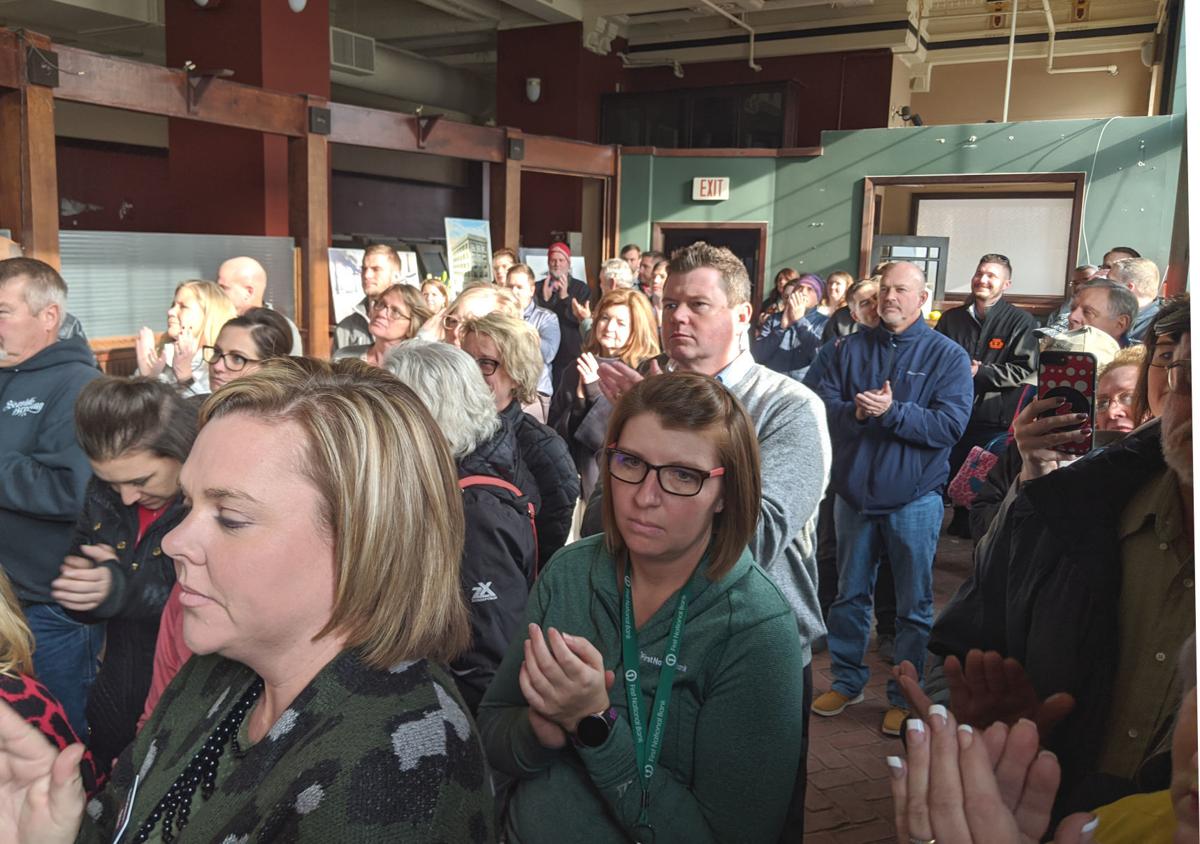 Members of the Fremont community attend a press conference and nail-tapping ceremony for the Lofts @ 505 at the 505 Building Friday afternoon. 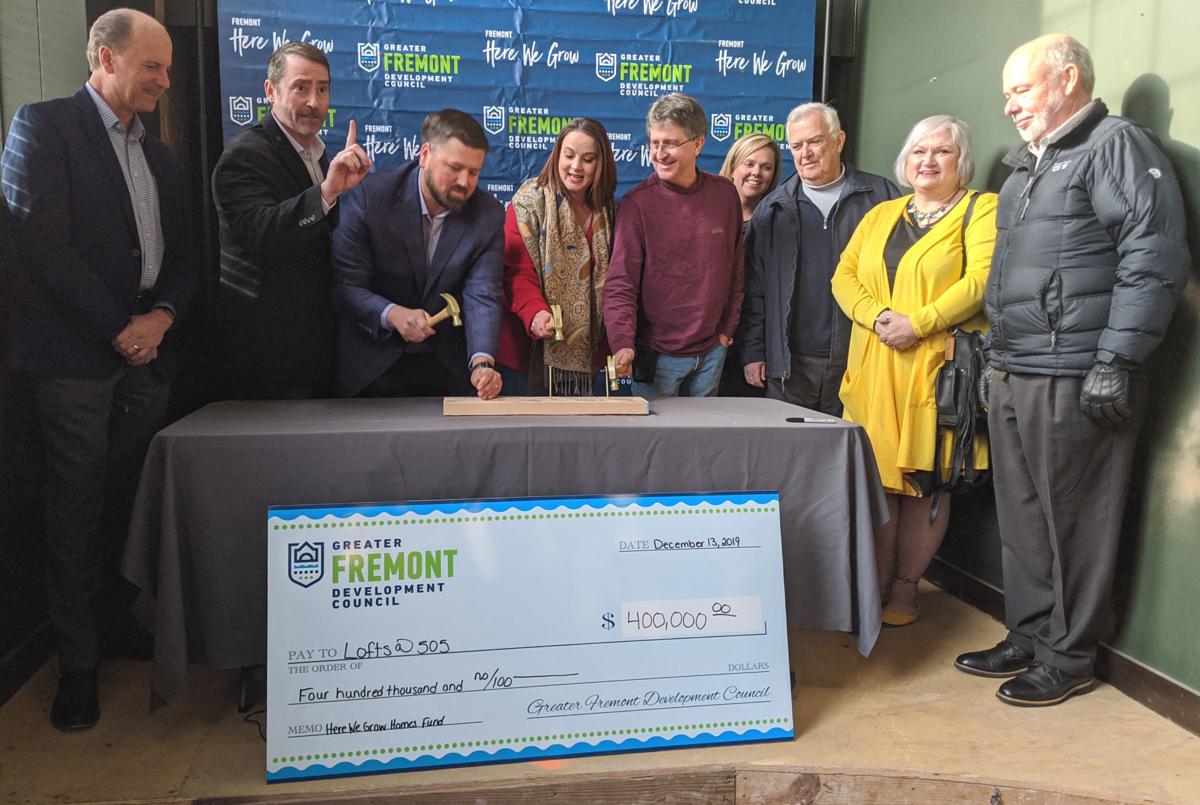 Lofts @ 505 developers Jeff Carpenter, second from left, and Ryan Durant, third from left, pose with members of the MainStreet of Fremont and Business Improvement District Board at the 505 Building Friday afternoon.

Lofts @ 505 developer Ryan Durant shows members of the Fremont community plans for the apartment layouts at the 505 Building Friday afternoon. The project, which is expected to finish in April 2021, will add 24 apartments to the building.

Members of the Fremont community attend a press conference and nail-tapping ceremony for the Lofts @ 505 at the 505 Building Friday afternoon.

Lofts @ 505 developers Jeff Carpenter, second from left, and Ryan Durant, third from left, pose with members of the MainStreet of Fremont and Business Improvement District Board at the 505 Building Friday afternoon.

From the first time he saw the 505 Building more than a year ago, Ryan Durant said he knew two things: how beautiful the building was and how much it needed to be rehabbed and repurposed.

“I think that doing apartments on the upper floors in downtown makes a lot sense for Fremont,” he told members of the Fremont community Friday. “Fremont’s got a lot of great things going for it, and this will only add to the downtown.”

The Greater Fremont Development Council hosted a press conference and nail-tapping ceremony Friday afternoon for the Lofts @ 505, which plans to add 24 new residential apartments in the 505 Building.

After the event, Lofts @ 505 developers Jeff Carpenter and Durant gave attendees a tour of the upstairs area of the building, which also has plans to host the 505 Brewing Company and a retail venue.

Although the building has been long unoccupied, the GFDC received LB840 funding from the City to create the Here We Grow Homes Fund.

“That gave us an opportunity to provide services to leverage financing gaps for developers for housing and opportunities downtown,” GFDC Executive Director Garry Clark said. “So this is what you see here, is shortly after that fund was generated and created by the city council and the City of Fremont, we had this opportunity right here.”

The event also featured an appearance from “Monty,” Fremont’s new mascot as designed by the GFDC. The mascot was named after a contest held with the public earlier this year.

Clark said that the concept of downtown is always important for a community, as it acts as a gathering place for friends and family.

“As we stand here, we see Fremont has a historic, vibrant downtown with a beautiful visual presence that’s always been here,” he said. “We also see the opportunity for us as leaders, citizens to see a catalyst for downtown expand right here in front of us.”

Durant said the last year has been a “whirlwind” for him and the community of Fremont. He said with the flooding last March, he was nearly stranded in the city to meet a vendor.

“I can say you guys have been through a lot as a community, but this was always a priority for this city and Garry’s group, and I can’t thank you guys enough,” he said.

Durant said he also directed an interested friend to set up the 505 Brewing Company in the building.

“I don’t know how I pulled that one off, but I’m very excited for Fremont because this guy is a veteran and he will create some great beer and will make this building a destination,” he said. “I hope people from all around the region come just for the beer and then to see this beautiful building in downtown.”

Carpenter said from the first time Durant brought him inside the building, he could see exactly the grandeur that it had in the community.

“We’re just very excited to be able to bring that back, to really look at it and say, ‘How can we bring back some of those classic items, some of those really beautiful pieces that you’ll see throughout the building?’” he said. “So we want to make sure we tip our hats to the past, but also make it that destination where it’ll help really move things into the future for the downtown.”

Getzschman called the event an “awesome day” for Fremont. He said during the last 12 years, the 505 Building has been toured by multiple developers, engineers and architects for various design concepts.

The biggest challenge for the project has been funding, and in 2011, Getzschman said the city council prepared a blight and substandard study for downtown, which led to a redevelopment plan and the ability to use tax increment financing (TIF) on the project.

“But even with TIF, even with historical tax credits, we got close, but were never able to close the deal,” he said. “But today, I’m extremely proud and excited to be part of the unveiling of the Lofts @ 505.”

Getzschman thanked Durant and Carpenter, as well as the GFDC for their work on the 505 Building.

“This project will make a huge impact for downtown Fremont,” he said. “Thank you for all the hard work from everybody to bring this project to a reality.”

Vobejda said before the event, he kept seeing the same question asked on social media: “Is this really going to happen?”

“Too many times, I think, in our history, people have talked about it, thought about it, rumored about it, and we hadn’t gotten to this point,” he said. “So this is a big deal and a big day.”

Vobejda cited a 2009 Fremont Tribune article that focused on the 505 Building. He said while the building had once been a hub for restaurants and business, it had turned into an “eyesore” that could possibly be torn down.

In the article, former GFDC Executive Director Kevin Wilkins said the building would take “imagination, creativity and guts,” as well as the right project and people.

“I’m happy to be standing here today with the right project and the right people,” Vobejda said. “This building is very clearly an important project.”

Vobejda said the 505 Building not only plays a role in building the diversity of housing stock in the community, but it acts a catalyst project for downtown development, adds to the eating and drinking offerings in the community and serves as another important historical preservation effort.

“But maybe most important, this building and the redevelopment project is a symbol of the imagination, creativity and guts it takes, along with many strategic partners, to keep the community of Fremont moving forward,” he said.

Schaefer said that revitalization is key to keeping the heart of Fremont going, and without it, it will fail to thrive.

“The direct impact of the 505 project does not only affect downtown, but it affects your local and your state economy as well,” she said. “Revitalization not only creates jobs, but it’s increasing the property values around you and it’s creating housing opportunities for the growth within our community as we grow.”

Schaefer congratulated the project and said she looks forward to working with the building as it grows.

“Microbreweries, they have been proven that they serve as an engine in the economic development and catalysts for cities like Fremont,” she said. “The development of the 505 Brewing Company will provide a sense of place that will spur growth for our retail and our dining right here in the historic downtown Fremont.”

Sometimes you get a revelation.

What kind of Thanksgiving food are you?