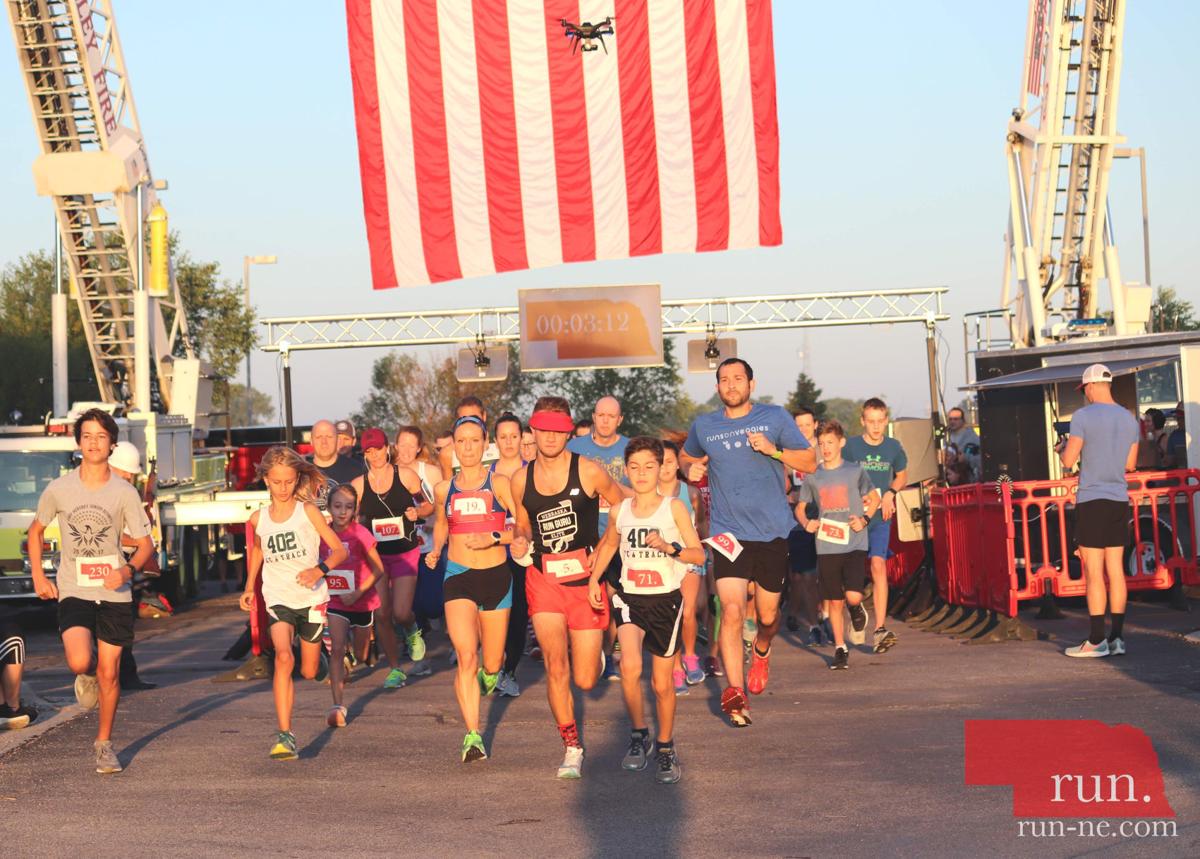 Runners take off at the Twin Rivers YMCA Freedom Run, timed by Run Nebraska, in Valley in September. Run Nebraska, which is based out of Fremont, purchased the drone in the photo after winning $5,000 in Fremont Creative Collective's Pitch It in Fremont! contest last year. 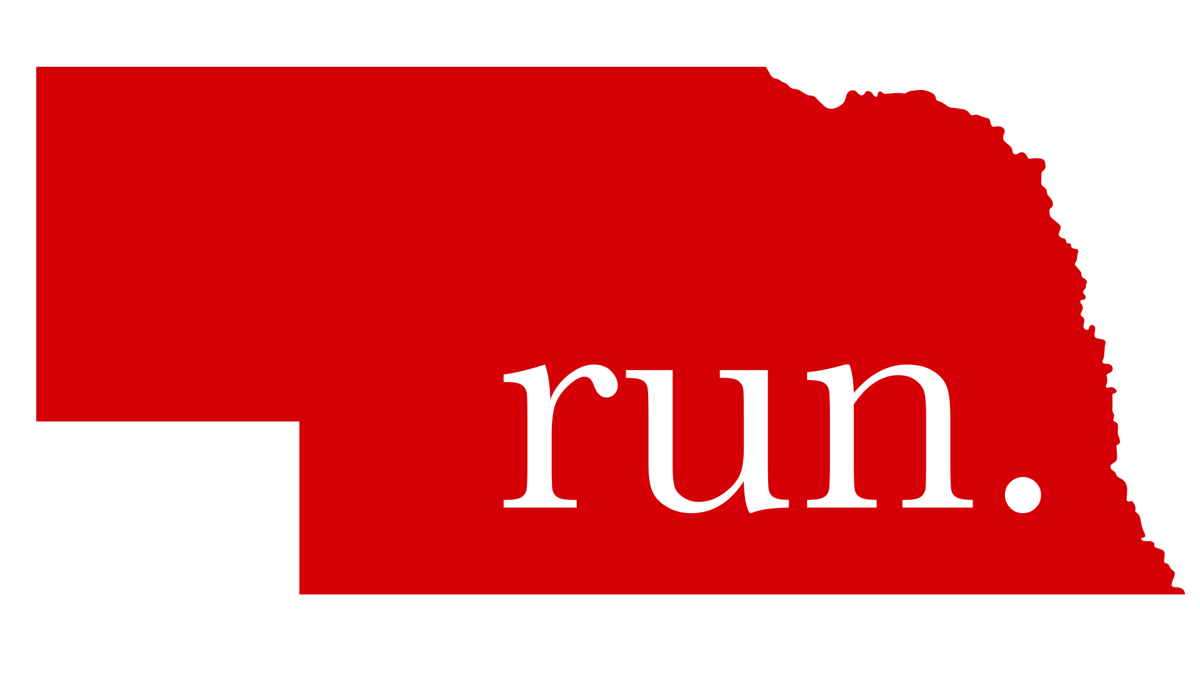 Run Nebraska is a Fremont-based company that develops race-timing equipment and provides photography and race-planning services. 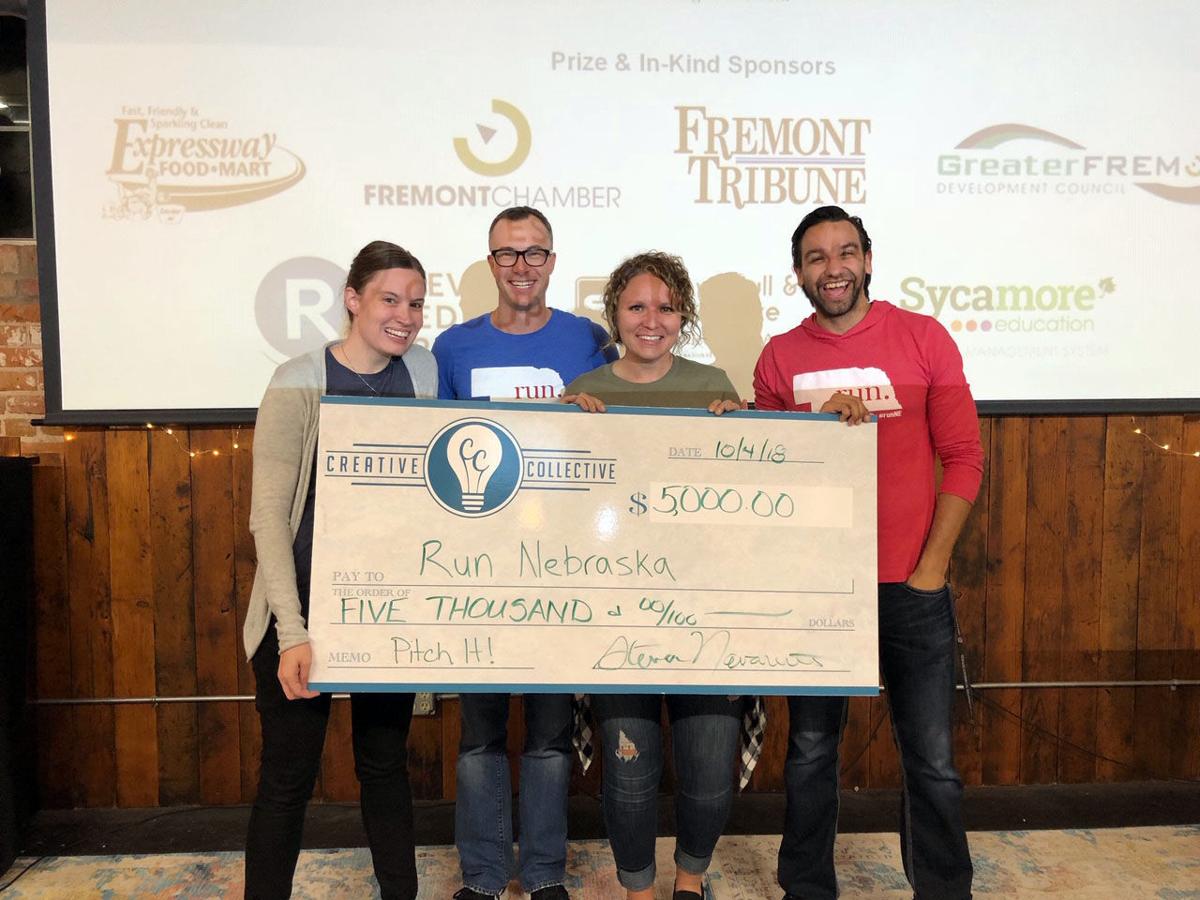 Run Nebraska, LLC. won the Fremont Creative Collective's first-ever Pitch It in Fremont! competition at the May Brothers Building in October 2018. The company was awarded $5,000, which was used to purchase a trailer, drone and new camera.

Runners take off at the Twin Rivers YMCA Freedom Run, timed by Run Nebraska, in Valley in September. Run Nebraska, which is based out of Fremont, purchased the drone in the photo after winning $5,000 in Fremont Creative Collective's Pitch It in Fremont! contest last year.

Run Nebraska is a Fremont-based company that develops race-timing equipment and provides photography and race-planning services.

Run Nebraska, LLC. won the Fremont Creative Collective's first-ever Pitch It in Fremont! competition at the May Brothers Building in October 2018. The company was awarded $5,000, which was used to purchase a trailer, drone and new camera.

Hector Suazo said that he and his other running friends often saw other race-timing companies fail to interact with the people in the race itself, which led to the creation of Run Nebraska.

“We wanted to make it a big event instead of just hiring us to do the race and that’s it,” he said. “We want to be involved in the whole aspect of it with the racing community.”

From those gaps in the local race-timing industry, Chris McBratney brought the idea to Suazo, Kurtis and Melissa Slater and his wife, Ashley, who started Run Nebraska in November 2017.

The company, which is based out of Fremont, develops equipment to be used in timing races, including RFI indicator chips, as well as photography and race management. It provides times for races on its website.

Run Nebraska has timed multiple events in the Fremont area, including its own White Light Mile last month. It will also time the Fremont Family YMCA’s Turkey Trot next Thursday.

The business combines the founders’ skills in marketing, technology and running to build a niche market for themselves, McBratney said.

The crew has also been receiving advise from City Councilmember Glen Ellis, who owns the Milady Coffeehouse. His nonprofit, Fremont Creative Collective, awarded the company with $5,000 after it won its Pitch It in Fremont! contest in October 2018.

“Their company is growing, and it’s going to be a while before one of them can go full time with it, but it’s getting there,” Ellis said.

With the money, Run Nebraska was able to purchase a trailer for storage, hauling and timing. It was also able to upgrade its camera and purchase a drone for aerial videography.

“First and foremost, it gave us a more professional feel,” McBratney said. “Not that we weren’t professional before that, but it just kind of kicked that up a notch.”

With setting Run Nebraska up in Fremont, McBratney said the company has been able to travel short distances to races in Lincoln, Omaha, central Nebraska and South Dakota.

“So it gives us a good place to set up a foundation,” he said. “Plus, there’s some good history with the running community here in Fremont, so we thought that would also be a good opportunity for us to take advantage of.”

After a few months of business, the Run Nebraska crew had heard about Ellis working with entrepreneurs and start-ups and decided to set up a meeting with him.

“None of us had started a business before. We had no idea what we were doing,” McBratney said. “And we sat down and met with Glen one day, and the rest kind of just took off from there.”

Ellis has been working with several start-ups in Fremont, including M&M Creamery, Darling Daylight and Smoke on Arrival.

“What I want to do is just really make sure people understand what this is going to take,” he said. “This is a lifestyle change, but it’s a good one. If you can do what you love and make money off of it, what a better place to be in life?”

Ellis said he often tries to be realistic with the start-ups he works with, since he’s seen several companies shut down along Main Street in downtown Fremont.

But in working with these companies, Ellis said he doesn’t want to take any credit for their success or any of their earnings.

“I just want to be a coach on the sidelines to encourage them and then walk them down the path,” he said.

McBratney said he and the other members of Run Nebraska often ask Ellis for advice if they’re stuck somewhere and need guidance.

“I think that’s been invaluable, because we’re new to this,” he said. “We have no idea if what we’re doing is right or wrong, so having another person who’s set up a business and run one successfully to lean on is huge.”

Ellis has met with the Run Nebraska crew a couple of times since their creation. During the first couple of meetings, he mentioned that he would be holding a “Shark Tank”-style competition for local businesses.

With a presentation written by McBratney and compiled by Kurtis Slater, Run Nebraska competed against nine other companies for the event, which McBratney said was a “really cool experience.”

“Doing that really made us think, and honestly made me realize, ‘Wow. We’re not thinking about our business as analytically and critically as we could,’” he said “And so it almost kind of removed us from the company a little bit and let us look at it the way an outsider might.”

Ellis said the award was like a “shot of adrenaline” for Run Nebraska.

“They just immediately shot up and started being able to do some bigger races,” he said.

“It definitely helped us out a lot,” Suazo said.

Going into 2020, McBratney said the unofficial “off-season” of winter will give the Run Nebraska crew a chance to sit down and do strategic planning for the company.

“It’s a nice way for us to take a little bit of a break and look back on the year and see where we’ve come and look at the future and say, ‘Where do we want to go?’” he said.

Because Run Nebraska is event-focused, McBratney said the company won’t aim for an office space, which will save the company money.

“That’s the big one I can think of, is trying to open up to different types of events like cross country,” Suazo added. “Biking events, we considered at one point.”

The Milady Coffeehouse acts as Run Nebraska’s unofficial de facto office, as its employees will meet with race directors and other clients inside the building.

“Glen’s been a great partner because I think he sees the big-picture vision of, ‘If you build it, they will come,’” McBratney said. “And the more business you can attract, the better it is for the local economy and environment.”

Having lived in Fremont for 16 years, McBratney said he’s gotten even more involved in the community since starting Run Nebraska.

Suazo said he’s often known as the “hype man” of the races he does photography at, as he loudly cheers the runners and gives them high-fives.

“I’m considered the ‘enabler,’ so I like to interact with people around the races and just encourage them to have a good time,” he said.

With having received so much counseling from the Fremont community, McBratney said Run Nebraska is willing to give back.

“It’s opened us up to have a willingness to be a mentor in the community to others,” he said. “Even though we’re still in our infancy, I think there’s still some expertise that we can lend.”

But no matter what, Run Nebraska is still growing, McBratney and Suazo agreed.

“We’ve learned a lot,” McBratney said. “We’ve screwed up, but we’ve had some really big victories and successes.”

While many United States troops are spending holidays thousands of miles away from family and friends, students at Fremont High School are mak…

Who's your TV mom?