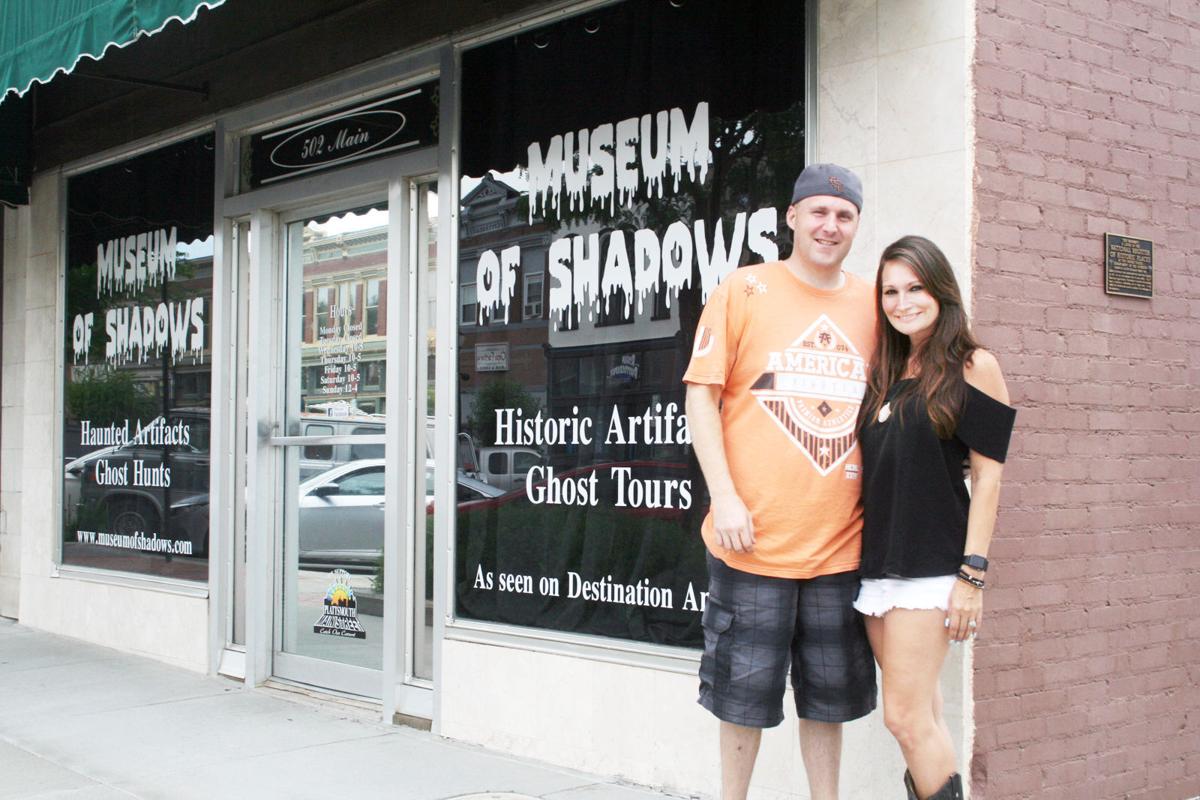 Nate and Kaleigh Raterman moved the Museum of Shadows, the most haunted museum in the world, from Elmwood to 502 Main St., Plattsmouth, June 17. The museum draws hundreds of people from all over the world to see its 1,000-plus haunted items, partake in ghost hunts or go on candlelight tours. 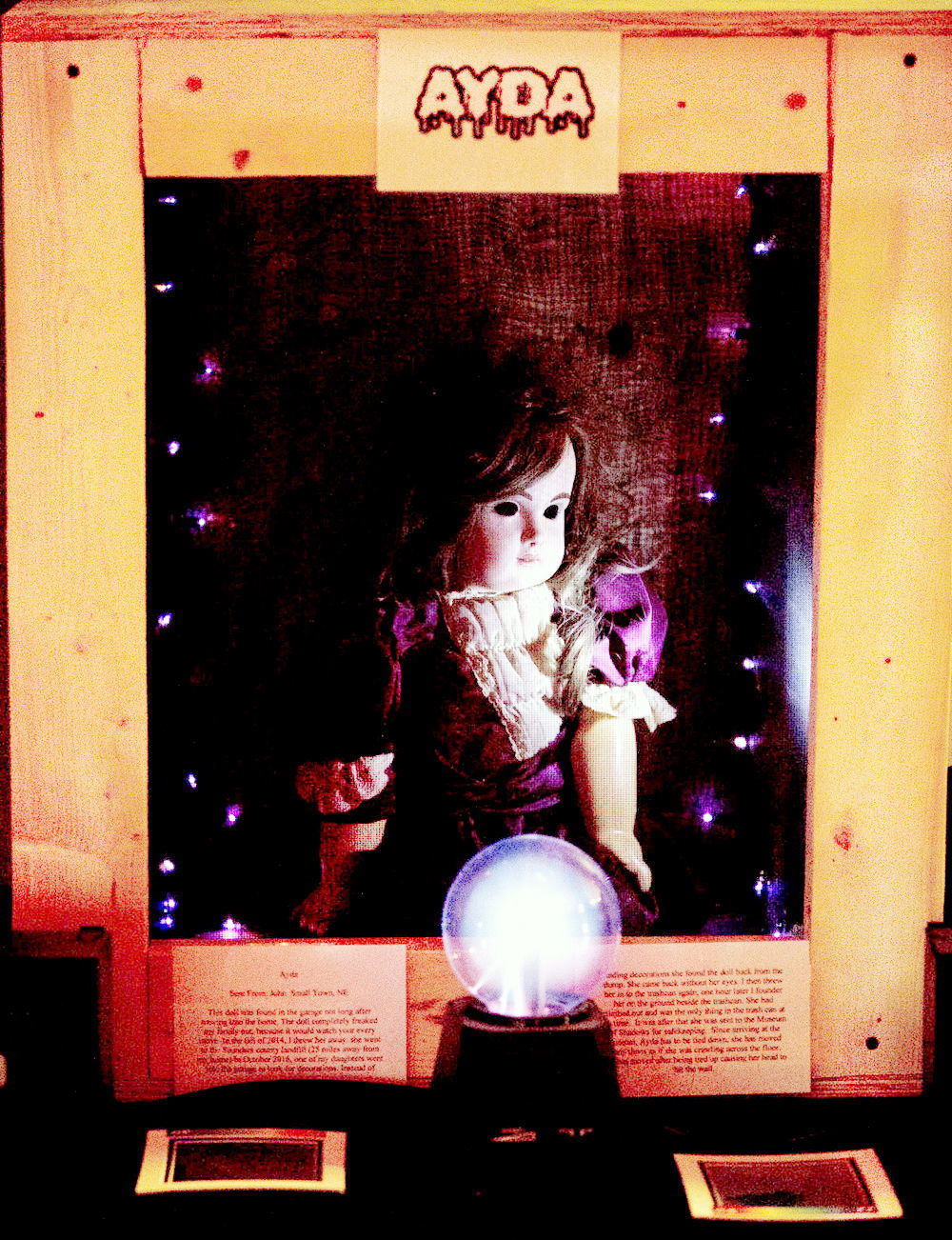 Ayda is one of the museum's most popular attractions as she is considered the most haunted doll in the world. 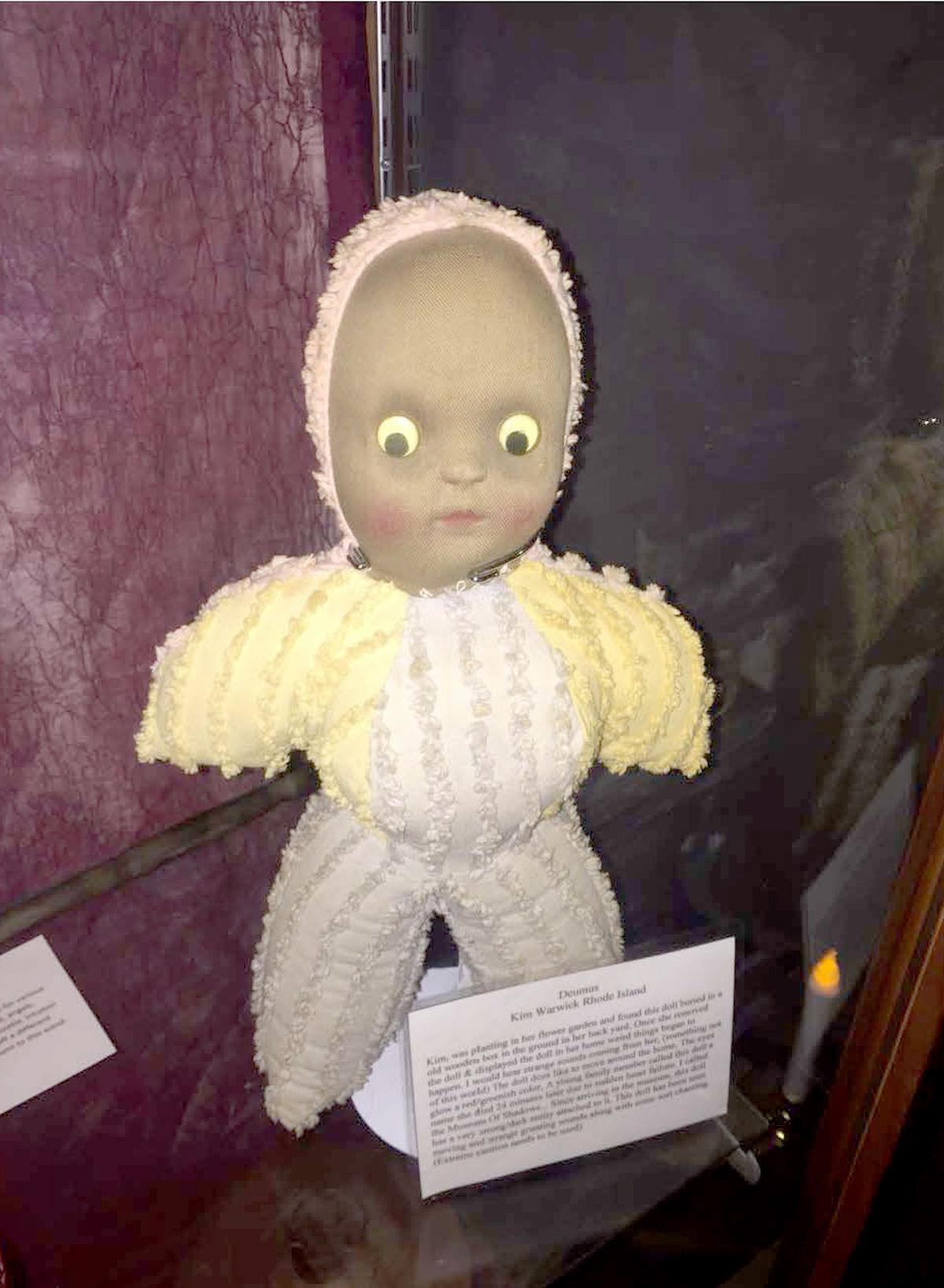 Demus was found buried in a box in a garden. After the owner of the garden brought the doll inside, she started hearing strange sounds coming from it and noticed the doll moved around the house. It is considered the second most haunted doll in the world.

At the Museum of Shadows, the most haunted museum in the world, a battery-operated toy monkey occasionally crashes together the miniature cymbals he holds.

“That creeps a lot of people out,” said Kaleigh Raterman, co-owner with her husband Nate Raterman of this haunted museum in Plattsmouth. “He moves from time to time but he has no batteries in. He does this at different hours of the night, and during the day. One time he triggered our alarm system at 2:30 a.m.”

The toy monkey is one of more than 1,000 haunted items showcased at the museum, many just as scary as he is. That's why it is considered the most haunted museum in the world as well.

There is Ayda, an antique, porcelain red-haired doll that also likes to move on her own in the museum. “She’s friendly, but you must be respectful when talking to her. A six-year-old girl is attached to her,” Kaleigh said.

Joining Ayda in the museum is Demus. “Demus is the second- most haunted doll in the world. Ayda is the most haunted,” Nate said. Demus was found buried in a box in a garden. When it was displayed in a home, the owner started hearing strange noises coming out of it and donated it to the museum.

Ayda is going to be featured in a movie that will be shown in theaters across the nation. Demus is being considered for another film. Nate and Kaleigh will be the only ones handling either doll for the film work.

“We never handle any of the items with bare hands,” Kaleigh explained. “We wear thick gloves so there is no energy exchange from the item to us. They are so thick you could dip your hands in acid and it wouldn't penetrate them. We also don’t allow people to touch any of the items in the museum to keep them from getting any attachments.”

Although Nate wouldn’t reveal what the item is, the museum is home to something once on the Titanic. “It’s rare and behind glass, of course,” he said.

“Visitors can get right up to the glass case,” Kaleigh added.

Every item in the museum goes through a special quarantine process before it is showcased there. “The process is done in another building. Every item spends about two weeks in its own observation room undergoing investigations to see who and what is attached. The items are also researched in-depth by law enforcement and the FBI,” Nate explained.

Law enforcement is privy to information Nate and Kaleigh can't access on their own.

Most of the objects in the museum were donated by people from all over the world. “Not every item has an attachment and those items won’t go in the museum,” Kaleigh said.

Those items are either returned or destroyed, Nate said.

Kaleigh said the museum houses two axes involved in a murder, but there is no negative energy attached to them. “It’s the victims of the murder that are attached to them,” she said.

Touring the museum is only one of the activities ghost-lovers can partake in there. “We have candlelight tours and guided tours in the evening where we talk about the most haunted items in the museum and the different paranormal activities we have experienced in the museum,” Nate said.

Actual ghost hunts are also available. “It’s lights out and we use top-of-the-line equipment and actually investigate ghosts. Our June 23 ghost hunt was sold out,” Nate said.

Four ghost hunts are scheduled every month. Only 12 tickets are sold for each ghost hunt. “Candlelight tours are open to anyone,” Nate said.

The museum opened in Plattsmouth June 17 at 502 Main Street. “We opened it October 2016 in Elmwood and moved it from there,” Kaleigh said. “Plattsmouth is really nice. We love the community. Our first event here in Plattsmouth involved all repeat customers who went to an event in Elmwood. They love the building and love Plattsmouth. There is more for them to do. They can walk around the downtown to the different shops. We’ve had really good feedback from people who came to our past location.”

Kaleigh said they both enjoy having the museum on Plattsmouth’s historic Main Street. “It’s also a larger building and we have room to expand,” she said.

Within a few months, the museum will be featured on a new television program, Haunted Ghost Files, weekly on a major network. “Each episode will start at the museum,” Nate said.

“When people are watching our show on TV, they will be really excited. It will bring a lot of people to see the museum and where it is located,” Kaleigh added.

In Elmwood, the museum drew an estimated 400-600 people each weekend. “People come from all over the world,” Nate said.

“They literally come here to see the museum and check out other things in the town. We had someone from Sydney, Australia, and a couple from the United Kingdom,” Nate said. “We had two from Minneapolis, Minn., last week and they stayed at the Fitzgerald Hotel.”

Nate has been involved in researching paranormal activity since 2006. “I lived in a house that had paranormal activity. I became a believer and also started my TV career. I’ve made appearances on many different shows such as A & E’s Travel Channel, Discovery Channel and Sy Fy. I’ve even done voice-over work for Despicable Me 3. Now I’m an executive producer, host and lead investigator for our upcoming TV series.”

Kaleigh met Nate when she applied to be on his Trip Paranormal team. “I’ve been experiencing different things for the paranormal since I was a little girl. I wanted to experience something different than what I had. When we met we were best friends. Now, we get to share our passion together. It’s really good to marry your best friend and do things you have in common together,” she said.

Of course, one of their main passions is the Museum of Shadows now open 10 a.m. to 5 p.m. Wednesday to Saturday, and noon to 4 p.m. Sunday. The gift shop is open to any customers and features books, T-shirts, ghost-hunting equipment, crystal and necklaces, and much more.

Nate and Kaleigh Raterman moved the Museum of Shadows, the most haunted museum in the world, from Elmwood to 502 Main St., Plattsmouth, June 17. The museum draws hundreds of people from all over the world to see its 1,000-plus haunted items, partake in ghost hunts or go on candlelight tours.

Ayda is one of the museum's most popular attractions as she is considered the most haunted doll in the world.

Demus was found buried in a box in a garden. After the owner of the garden brought the doll inside, she started hearing strange sounds coming from it and noticed the doll moved around the house. It is considered the second most haunted doll in the world.