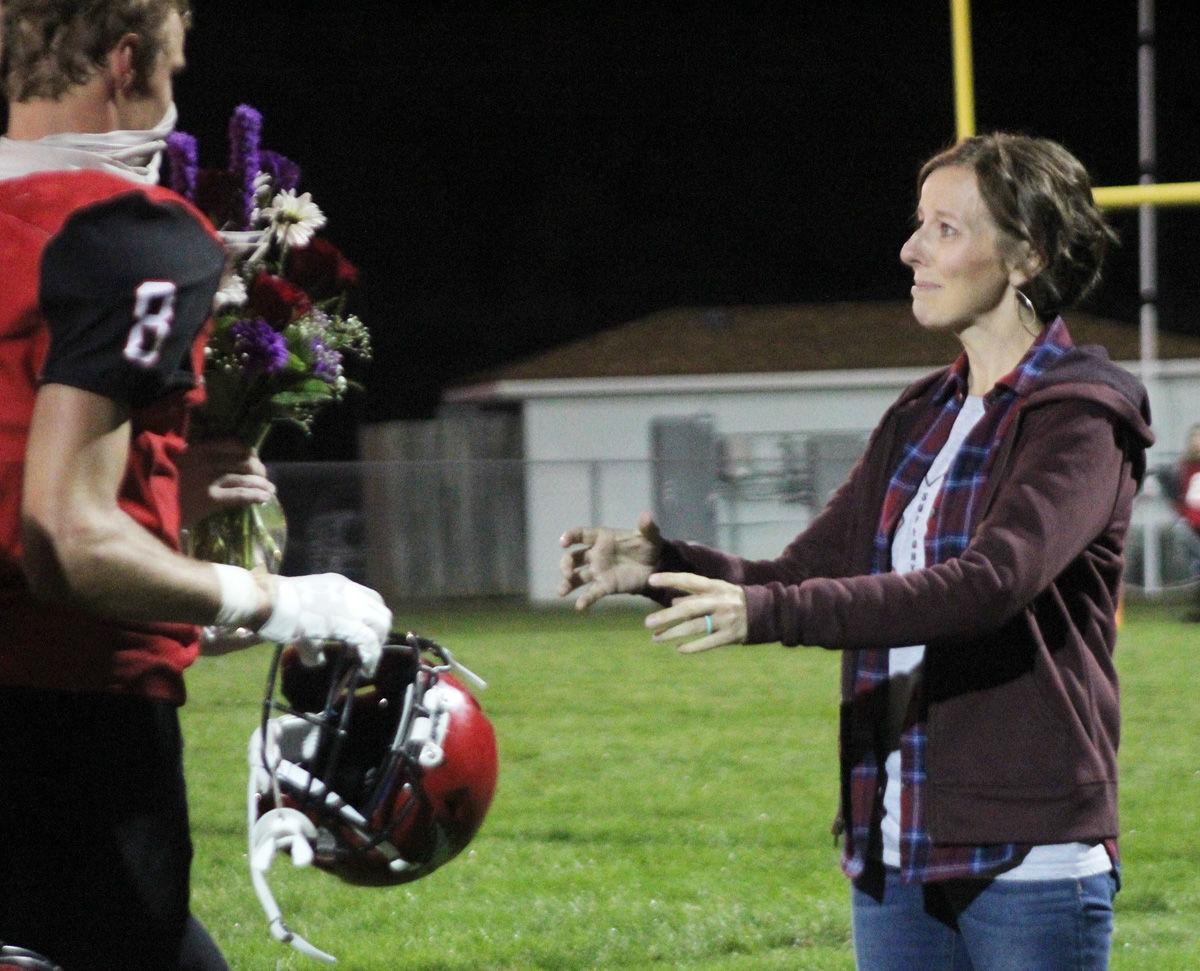 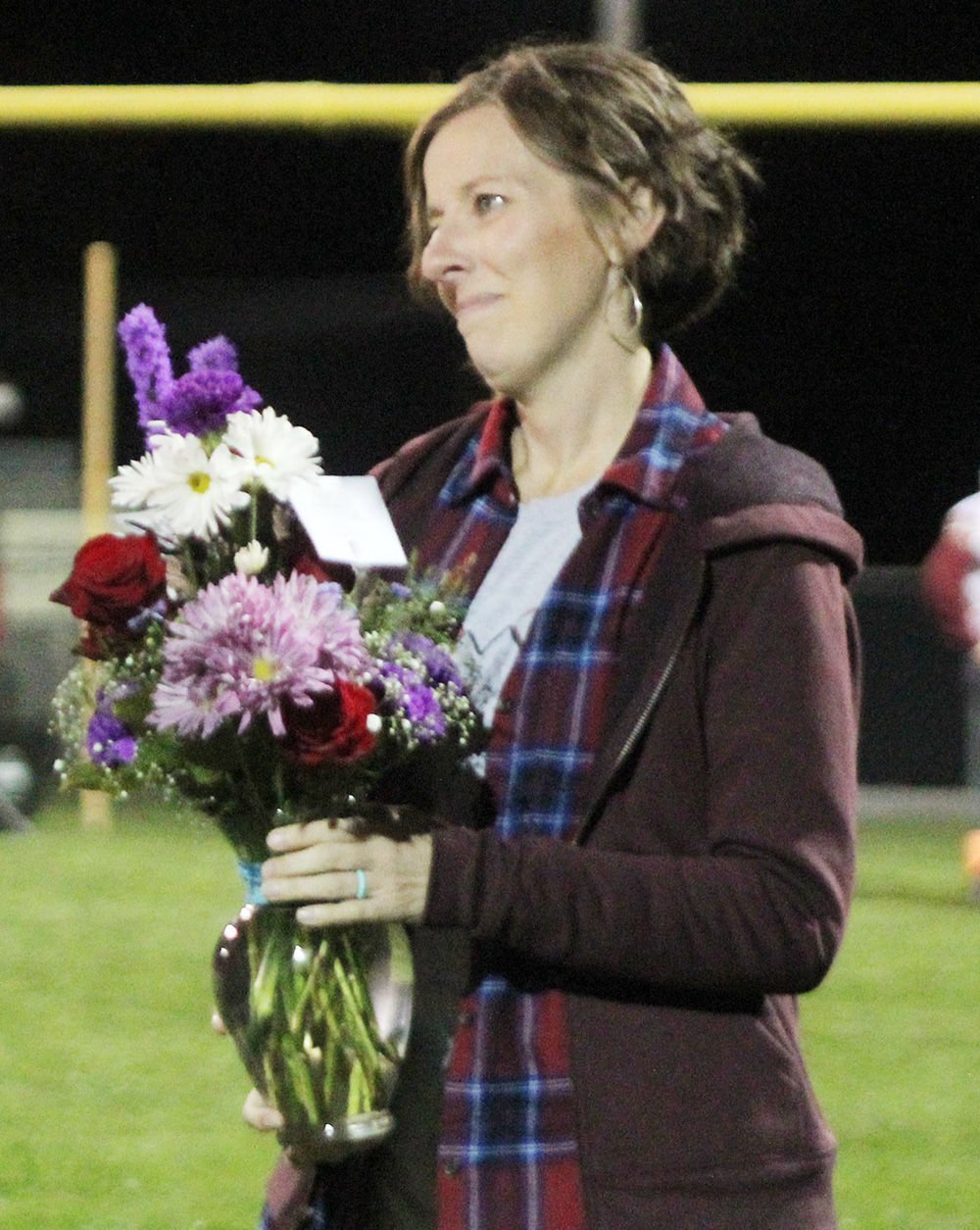 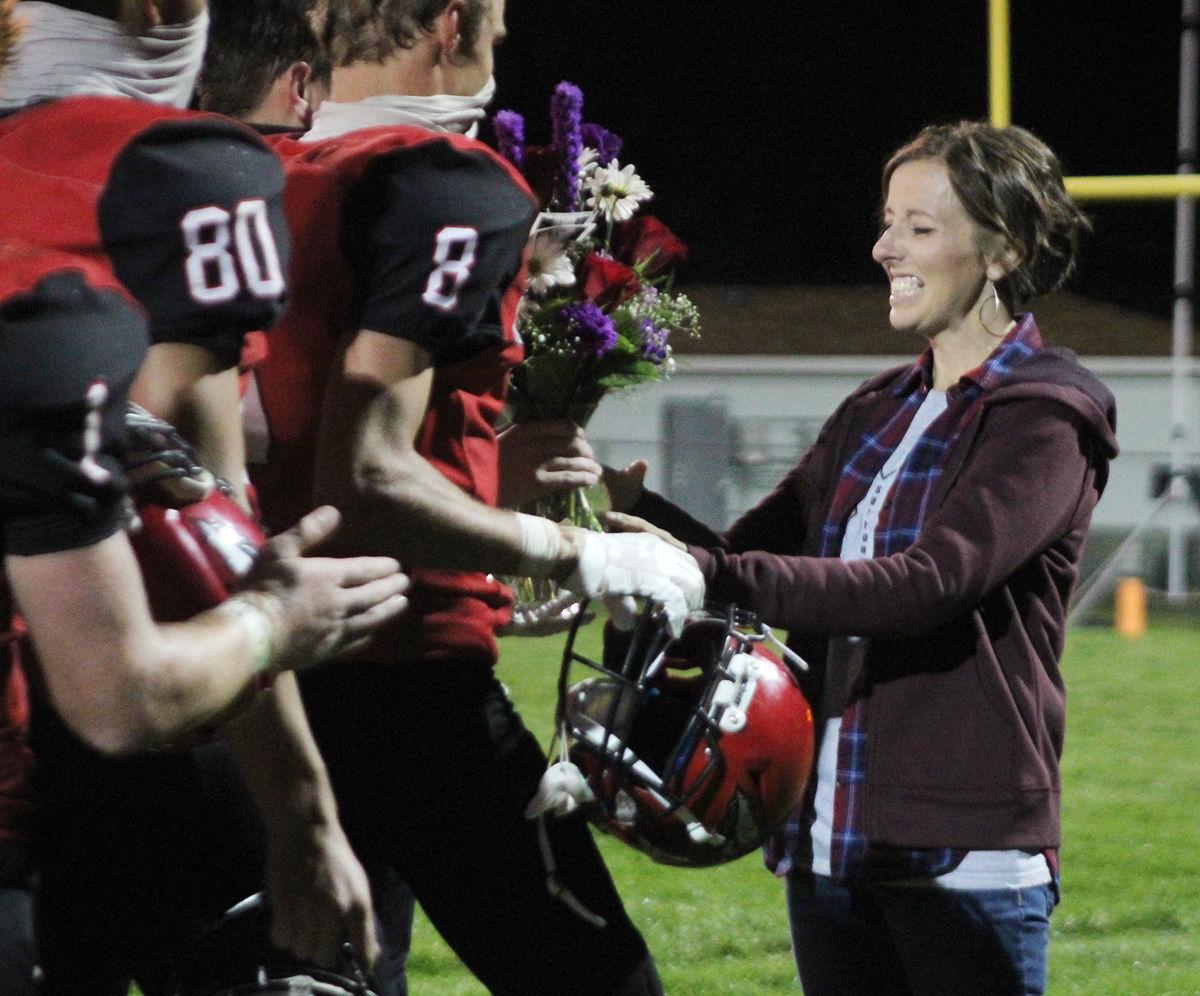 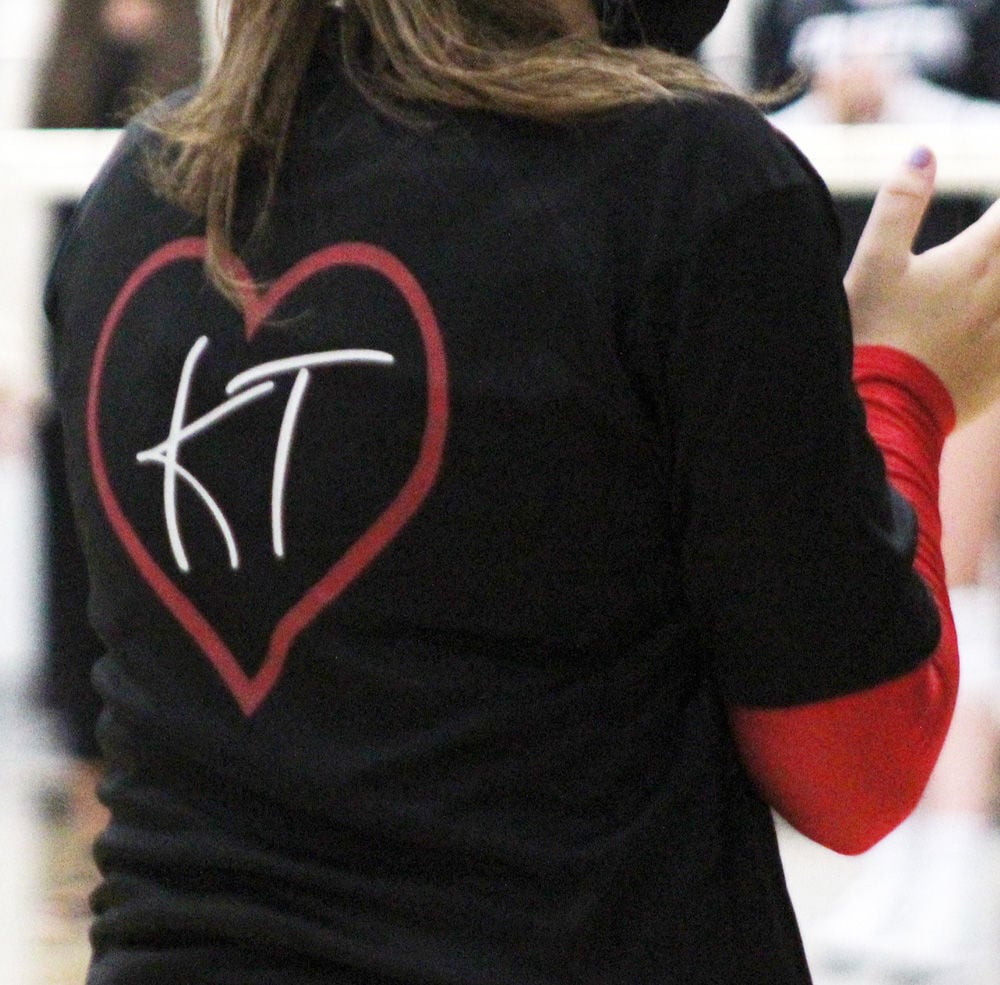 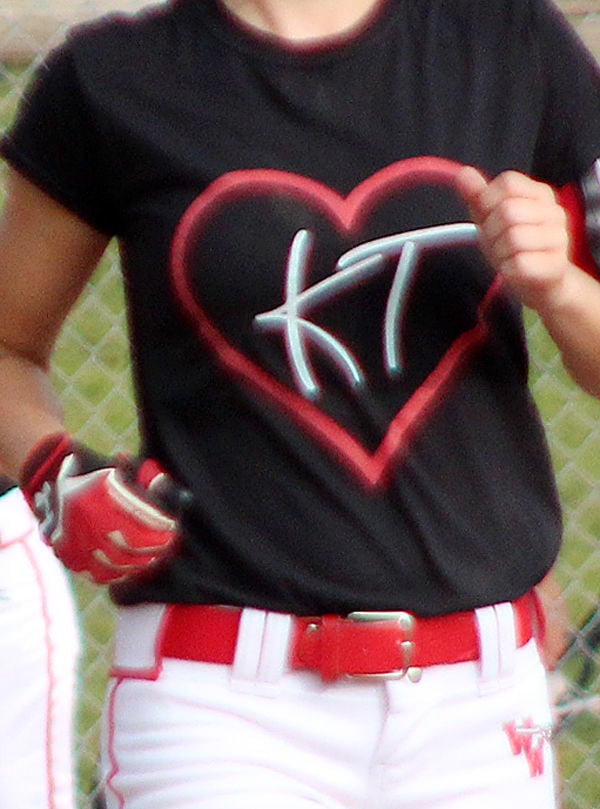 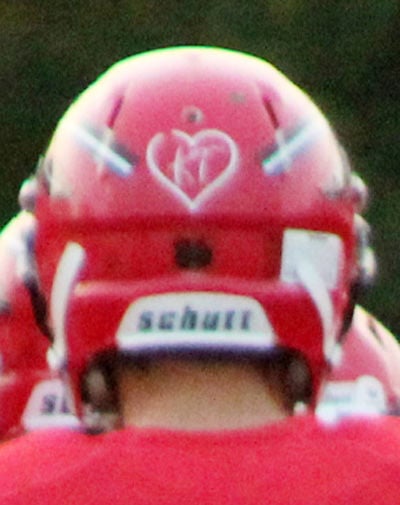 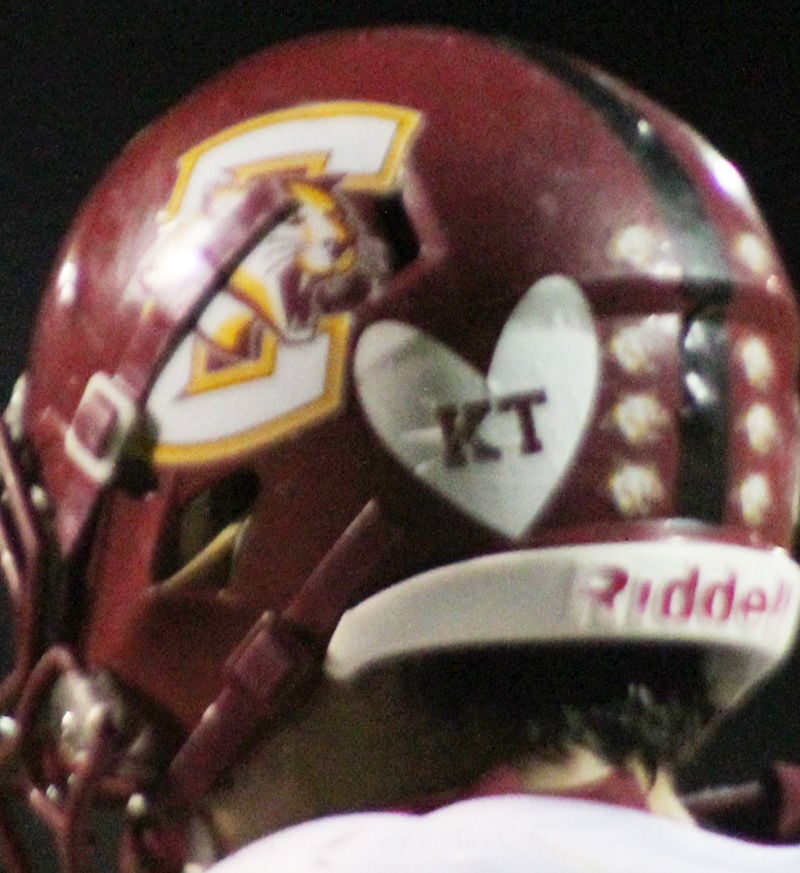 WEEPING WATER – Katrina “KT” Bescheinen has provided inspiration to hundreds of people in Cass County during her multi-year battle against cervical cancer.

Area residents provided their love and support to her on Friday night during halftime of a high school football game.

Bescheinen received a standing ovation from the crowd as part of KT Bescheinen Night. Fans from both Conestoga and Weeping Water wore KT Bescheinen t-shirts on the sidelines, and members of both football teams placed decal stickers with hearts and her initials on their helmets. Weeping Water football players presented her with flowers during a special ceremony on the field.

Weeping Water head football coach Joel Haveman said after the game that everyone in the community wanted to help the elementary special education teacher. The presentation of flowers was the latest event in a series of activities designed to encourage Bescheinen in her fight against cancer.

“We emphasized that all week,” Haveman said. “She’s such an inspiration to all of us. The guys wanted to play well for her, because they’ve seen the type of toughness that she’s brought to this fight. She’s just a warrior. There really aren’t enough words to describe what she means to all of us.

“To see what she’s done and how she’s handled this with such toughness and resolve is something that none of us are ever going to forget. She is the true definition of a warrior.”

Bescheinen began teaching at Weeping Water in the 2015-16 school year and soon became close friends with many staff members and students. She used her enthusiasm and integrity to provide special education students with the assistance they needed to learn new skills. She became known as “KT” throughout the building.

Bescheinen, 37, was first diagnosed with cancer in 2017. Treatment at that time caused the cancer to go into remission, but she learned in late 2018 that it had returned. Doctors discovered that the cervical cancer had spread from the location of the original tumors and had metastasized into her lungs.

Bescheinen and her family have traveled to the Mayo Clinic to form a plan for treatment. Local residents have conducted numerous fundraisers since that time to help the family with medical costs. An auction in January 2019 raised nearly $8,000 for Bescheinen, and many ticket raffle events at Weeping Water activities have provided thousands more in relief funds.

Weeping Water softball and volleyball players have lent their support to the cause this fall. Students on both teams have worn black t-shirts that showcase a red heart and the initials KT. Members of the Weeping Water and Boys Town volleyball teams spelled out her initials on the court earlier this month as a way to boost her spirits.

Weeping Water and Conestoga athletes will help Bescheinen again during a volleyball triangular on Thursday, Sept. 24. They will join Raymond Central for matches at Weeping Water Activities Center starting at 5 p.m. They will recognize Bescheinen during the evening.

PAPILLION – The number of COVID-19 tests taken in Cass County since this pandemic began has now gone over the 6,000 mark.

PLATTSMOUTH – A Lincoln man learned Tuesday morning that his bond would remain at $100,000 for his alleged role in a Cass County burglary attempt.

PLATTSMOUTH – Back on the winning track.

EAGLE—An Eagle man is in the Cass County Jail on charges that include making terroristic threats and possession of a firearm by a prohibited person.

PLATTSMOUTH – In other years, the biggest challenge Plattsmouth school officials might face would probably involve finances, a new facility or…