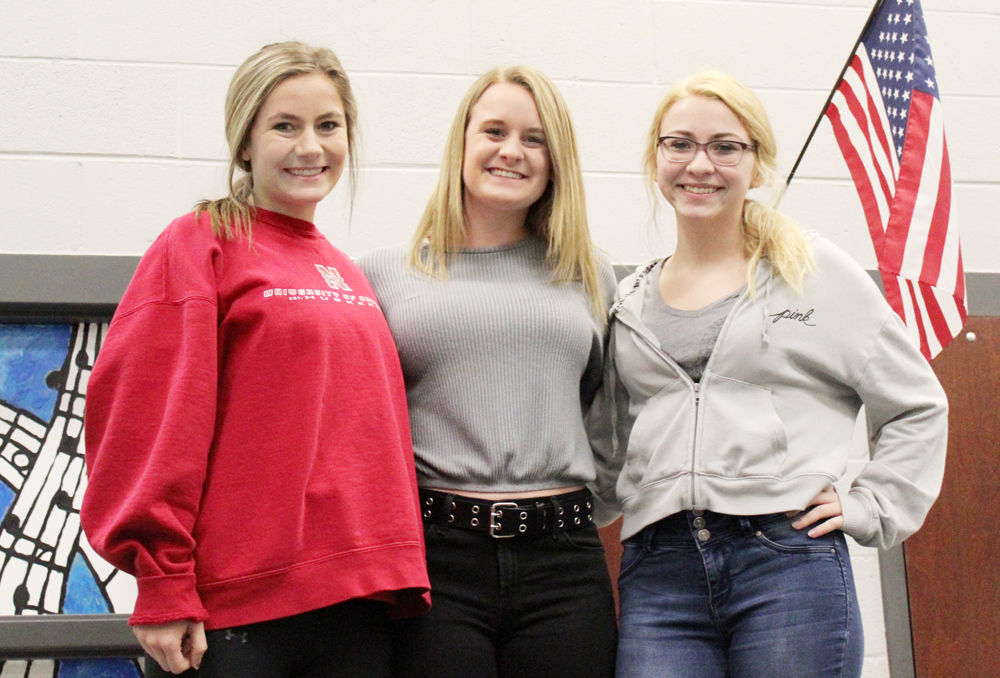 The four teenagers will be able to encourage thousands of people from across the state with their singing talents later this year.

Leget, Harvey and Simms are all Plattsmouth High School students and Ritzman attends Weeping Water High School. All four said they were thrilled to deliver renditions of “The Star-Spangled Banner” in front of state crowds.

“It was one of the best feelings when I learned that I would be able to have a chance to do this,” Simms said. “I’m really grateful for the opportunity. It’s an honor to be able to represent your school and country singing the national anthem at a state event.”

“I’m very excited and happy to be selected for this honor,” Ritzman said. “Especially knowing that there were over 200 entries this year.”

Harvey said she and Leget were happy to share the stage with each other for their duet. She said they have relied on teamwork to find success singing the musically-challenging song. The two friends have spent time experimenting with various harmonies to make a memorable version of the anthem.

“We’ve been singing together for a long time, so it’s a dream come true to be able to sing at state wrestling,” Harvey said. “We thought we had given it our best shot when we auditioned, so it was really exciting to learn that we had been picked.”

Students from across Nebraska submitted taped auditions to the NSAA this past fall. They could try out for the honor either as soloists or as groups with two to eight members. All vocalists were required to complete their version of the national anthem without accompaniment by piano or any other instrument.

Students could also provide their preferences for which state events they would like to sing at if they were selected. They could place check marks next to a wide range of tournaments and meets being held across Nebraska in the 2019-20 school year.

“When we filled out the audition form we marked several choices, but we wanted to put a really big ‘x’ next to state wrestling because that was something we were both hoping for,” Leget said. “It was awesome when we found out we would be able to get to sing there.”

“I was pretty open with where I would like to go if I was picked, so I’m really happy with having a chance to sing at the state wrestling duals,” Simms said. “I’m looking forward to it. Knowing I’ll have a chance to represent both the high school and the choir there is such a good feeling.”

Leget and Harvey will perform at the beginning of the third session of the state wrestling tournament in Omaha on Friday, Feb. 21. They will sing on the arena floor of the CHI Health Center at 9:25 a.m.

Ritzman has been notified that she will sing at one of the state baseball sites during the week of May 18. Class A teams will play at Haymarket Park in Lincoln and Class B schools will compete at Werner Park in Papillion. The NSAA will notify her with more specific information on the date, place and time later in the school year.

The four students will join a prestigious list of Cass County singers who have performed the song at state tournaments in the past decade. Plattsmouth, Elmwood-Murdock and Weeping Water have all had representatives who have showcased their vocal talents at the prominent events.

Leget said it would be a memorable day because of the importance of the national anthem to many people.

“I’m not sure it’s quite sunk in yet that we’re going to get to do this,” Leget said. “It’s a song that you hear all of the time and you know the words by heart because it means so much. To be able to sing it at a state event is going to be really special.”

Could you pass a U.S. civics test?