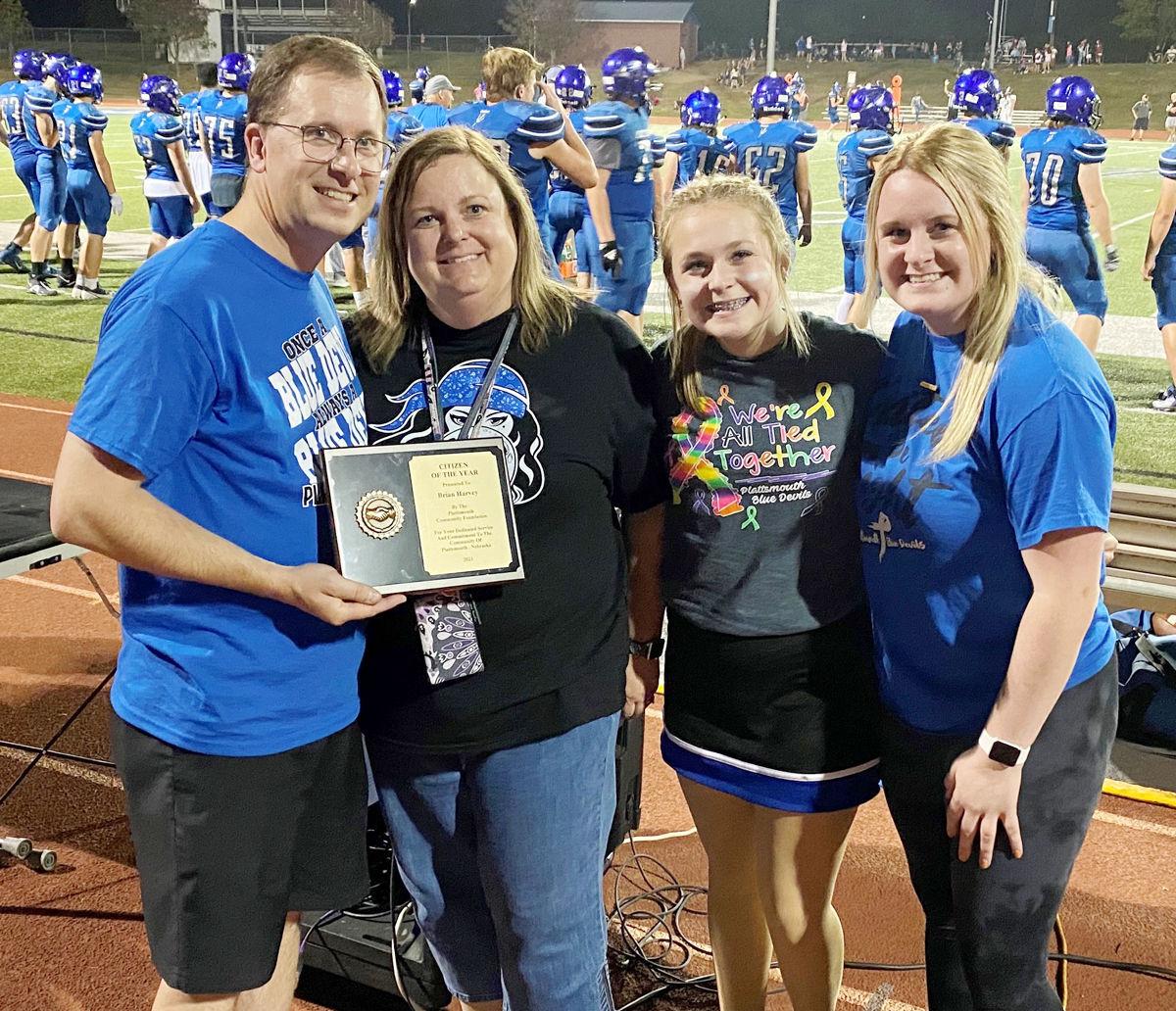 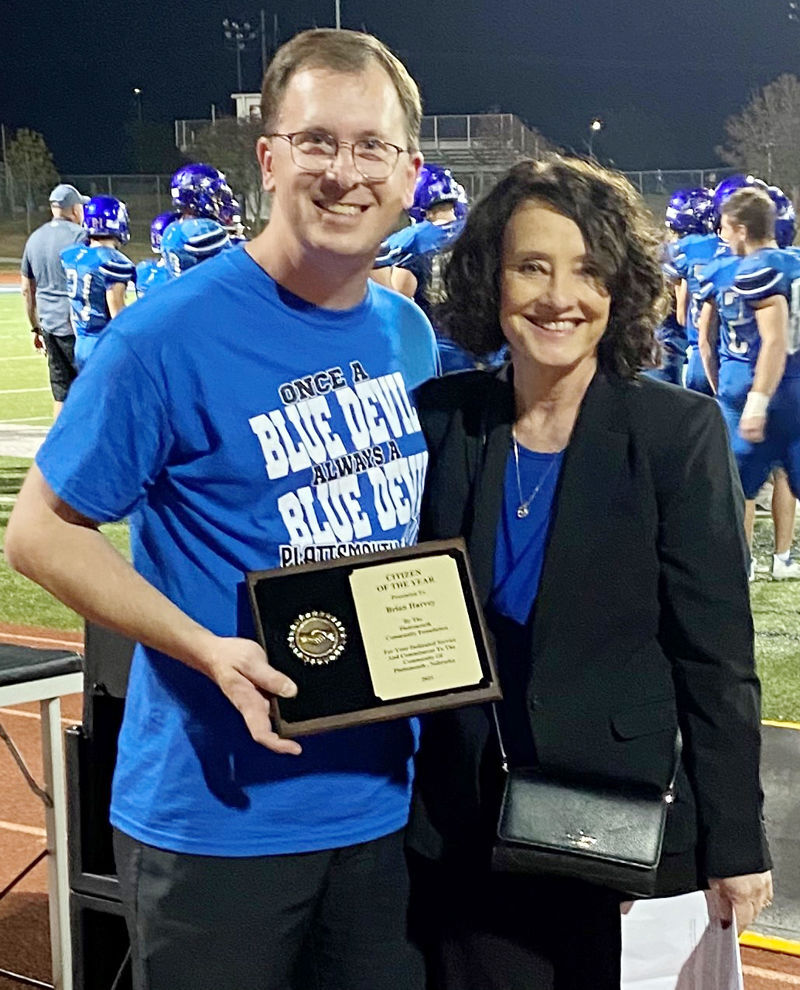 Brian Harvey and PCFF board member Dr. Cherie Larson smile with the Citizen of the Year Award. Harvey is a local businessman and serves in many community organizations.

PLATTSMOUTH—Local businessman and community activist Brian Harvey has been named the 2021 Citizen of the Year by the Plattsmouth Community Foundation Fund, which was started in 2000 as a way for people to give back to the community.

It not only encourages giving back financially, but also in giving one’s time and talent in ways to make Plattsmouth better.

The Citizen of the Year Award began in 2007 to recognize a volunteer who has donated countless hours to help make Plattsmouth a better place for future generations.

Harvey graduated from Plattsmouth High School in 1994. After earning a bachelor’s degree at Nebraska Wesleyan University in 1998, he completed his mortuary science degree in 2000. His career in funeral service began at Fusselman-Wymore Funeral Homes which he ultimately purchased in 2010 with his wife and business partners, Larson said.

“He faithfully serves families at their funeral homes in Plattsmouth, Louisville, Syracuse, Elmwood and Weeping Water,” Larson said. “His compassion and professionalism are evident in the way he works with each family he serves.

“Year after year, this individual goes above and beyond in his service to others and always seeks to make a positive impact in Plattsmouth and the surrounding communities.”

PLATTSMOUTH – The cremated remains of a local soldier from long ago are coming home.

NEHAWKA - A Nehawka man on Thursday evening was able to escape a car fire, but not from the long arms of the law.

One lane of traffic on Hwy.75 Wednesday and Thursday evenings

PLATTSMOUTH - U.S. Highway 75 from Nebraska Highway 66 to First Avenue in Plattsmouth will be down to one lane Wednesday and Thursday evenings…

PLATTSMOUTH – Among the members of the Plattsmouth Rotary Club attending the latest meeting were two specially-invited guests.

EAGLE – A motorcyclist from Lincoln was injured in an accident in Cass County on Monday.

PLATTSMOUTH – Gather up all those unwanted items because the 2021 Plattsmouth Fall Clean-up is coming.

Brian Harvey and PCFF board member Dr. Cherie Larson smile with the Citizen of the Year Award. Harvey is a local businessman and serves in many community organizations. 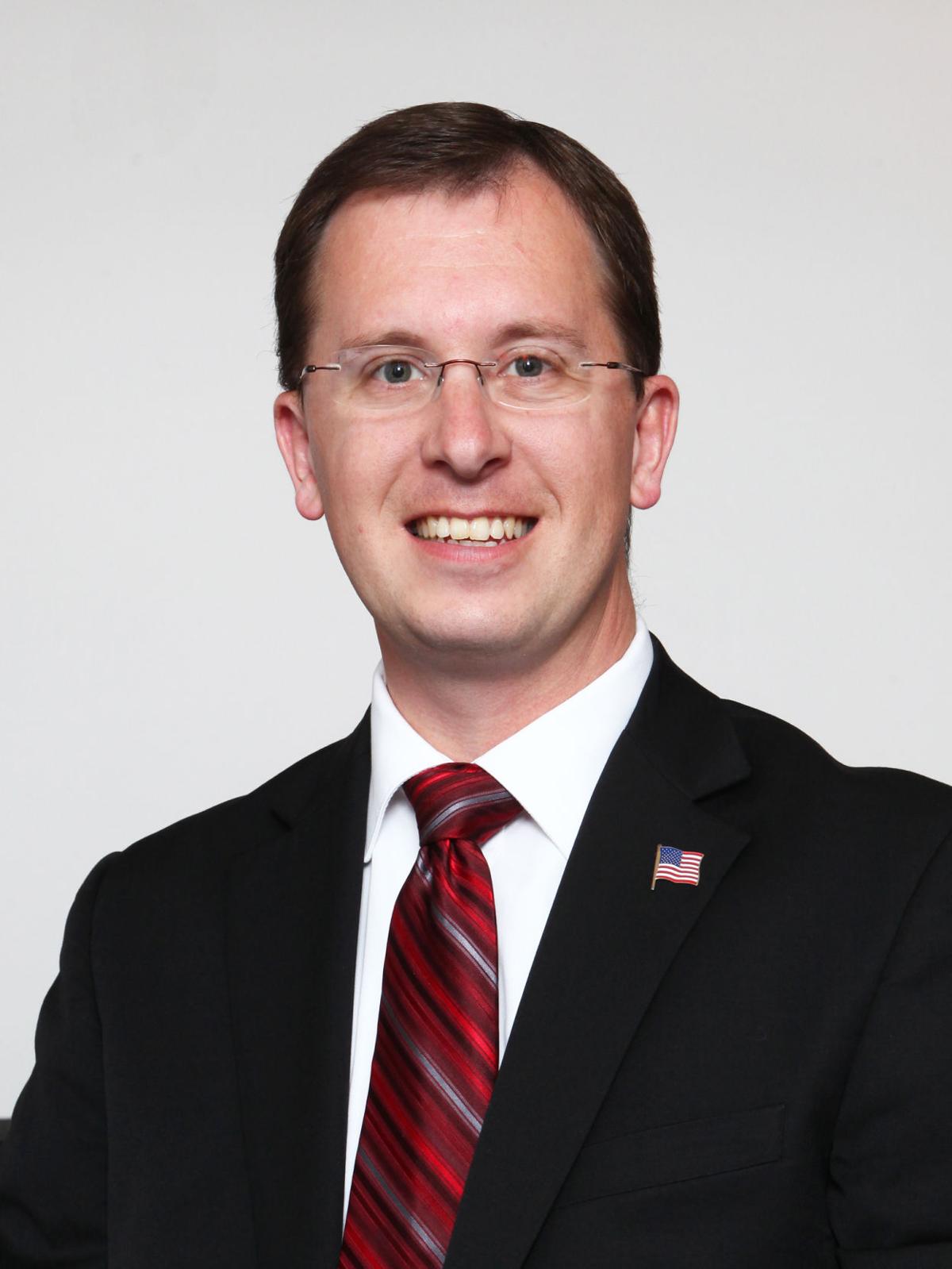