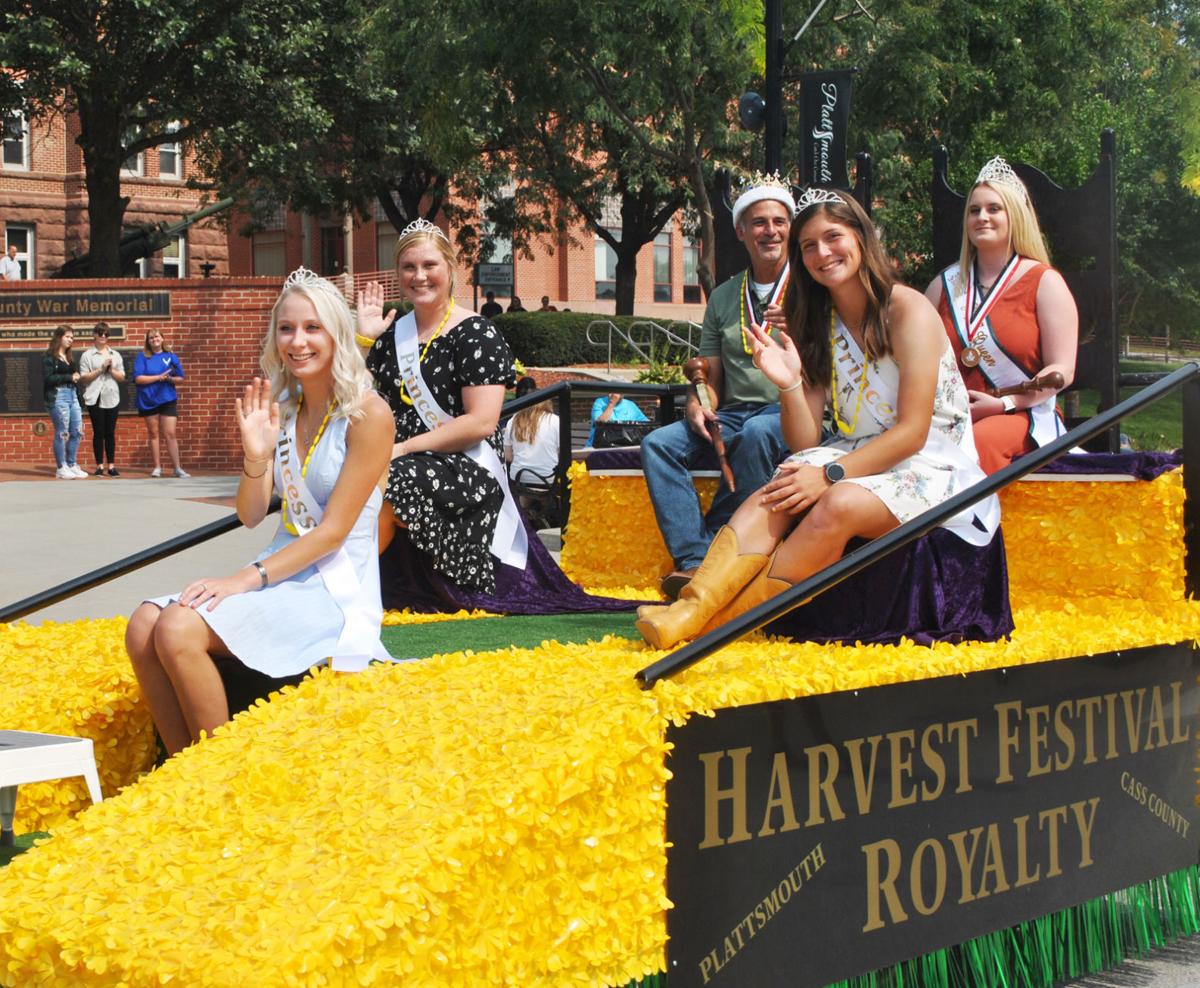 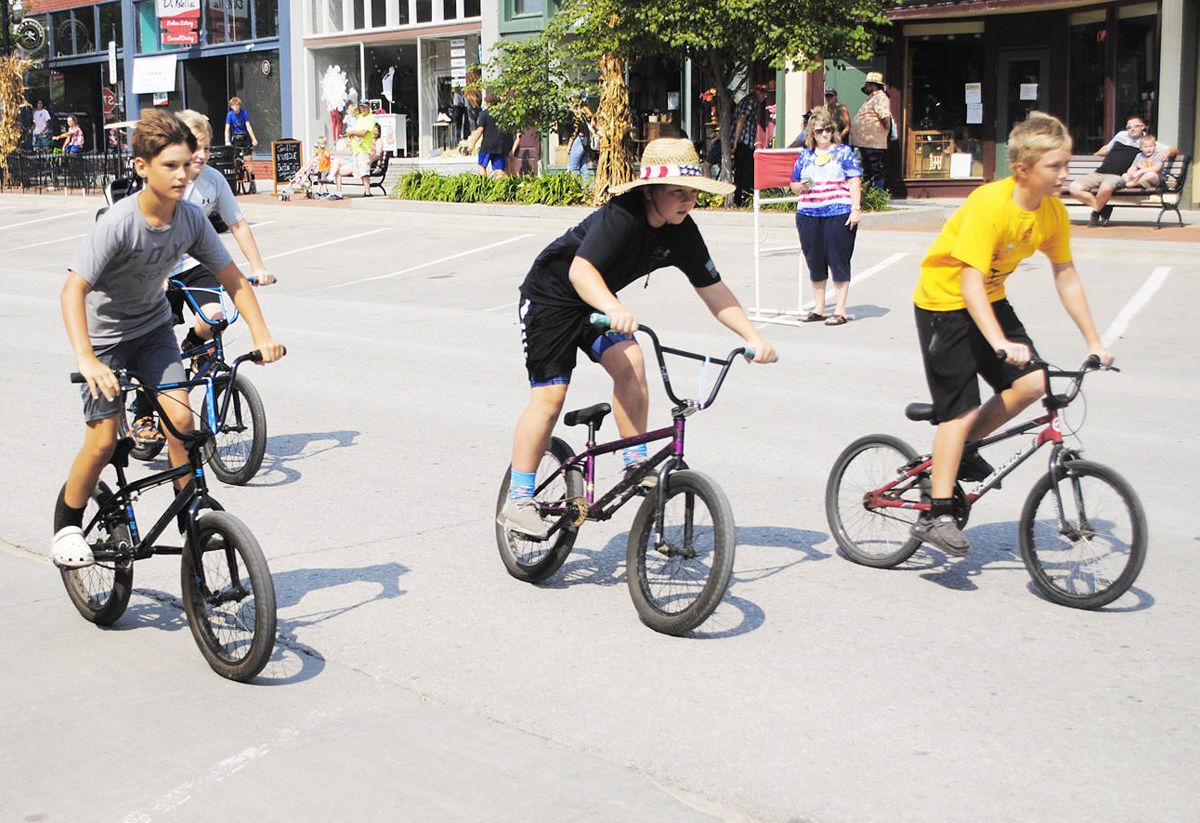 As in the past, this year's Plattsmouth, Cass County Harvest Festival featured many events for area kids, including a Saturday afternoon bike race on Main Street that brought out 18 kids for the fun.

PLATTSMOUTH – The 2021 Plattsmouth, Cass County Harvest Festival yielded a good amount of positive comments from both organizers and the public.

“I think it was a success,” said Karen Tesarek-Parsons, president of the organizing committee. “I’m happy with it.”

The festival, most of which was held last weekend in downtown Plattsmouth, is an annual city, county-wide get-together celebrating harvest time in this area, plus a chance to have some good, old-fashioned fun for all.

It began with the coronation of a king and queen that was held for the first time in the entertainment plaza at Fourth and Main streets.

“I think the coronation was a huge success moving it there,” Johnson said. “I think people were able to see and hear it better.”

There were traditional games for the young and young-at-heart, plus a change with a balloon toss replacing an egg toss for the kids.

“We had more participation with the balloon toss, instead of an egg toss,” Johnson said. “It was a positive move.”

There were 10 mostly-adult teams in the cornhole tournament that went over well, Tesarek-Parsons said.

Friday afternoon’s big event was the always popular Kiddie and Farmers and Merchants parade, followed by a talent show in the plaza. Fourteen kids between the ages of 3 and 10 displayed their skills on stage.

For the 14th time, the festival held hot seat/trike/bike races. This event attracted 18 kids at Sixth and Main streets on Saturday, according to organizer Cindy Dougherty.

Flags are ceremoniously burned after they become too worn, faded and weather beaten for further use, said local veteran Mike Pauly.

The highlight of the festival was the annual Saturday evening Grand Parade with its bands and floats. A special tribute to 9/11 was also held that evening.

“I thought the parade was great, and the 9/11 tribute was very moving,” Johnson said. “I had tears in my eyes.”

Saturday’s climax was a fireworks show that Tesarek-Parsons described as amazing. Sunday events at the Plattsmouth Airport and a community meal in Rhylander Park were both well attended, she added.

Understandably, an event this big may not go over with total perfection. For example, a Friday evening dance geared mostly for young people wasn’t as well attended as hoped, perhaps because of Plattsmouth High School’s home football game at the same time, the organizers said.

Next year, it might be moved to Saturday evening, they said.

Comments, both good and not so much, about the event are being read and addressed by the organizers, they said.

“We read the comments and take them seriously,” Johnson said.

She also wanted to publicly thank three city workers for their efforts to make the event go smoothly, especially the sound system. They are Craig Savala, Tim Prokupek and John McCarthy.

“They were phenomenal,” Johnson said. “They hung out around the sound system the whole weekend. They gave up their family time for the festival.”

PLATTSMOUTH – A Cedar Creek man was injured in a vehicle rollover accident on Tuesday evening.

PLATTSMOUTH – A large portion of Plattsmouth was in the dark around noon on Monday because of a power outage.

WEEPING WATER – Weeping Water students paid tribute to the victims of the 9/11 attacks on Friday night with a patriotic halftime show.

PLATTSMOUTH – The Cass County Board of Commissioners on Tuesday gave its approval, albeit slim, for allowing year-round storage of RVs at a ne…

PLATTSMOUTH – An elderly Plattsmouth man on Thursday morning was injured in a boating accident in the Copper Dollar Cove housing subdivision.

PLATTSMOUTH – Public service has always been a passion for Sarah Slattery.

PLATTSMOUTH – A Plattsmouth woman was injured in a two-vehicle accident on Ashland Road on Sept. 8.

PLATTSMOUTH – A man who drove drunk on Highway 75 before stopping at his Plattsmouth home entered pleas to two charges Tuesday morning.

As in the past, this year's Plattsmouth, Cass County Harvest Festival featured many events for area kids, including a Saturday afternoon bike race on Main Street that brought out 18 kids for the fun.