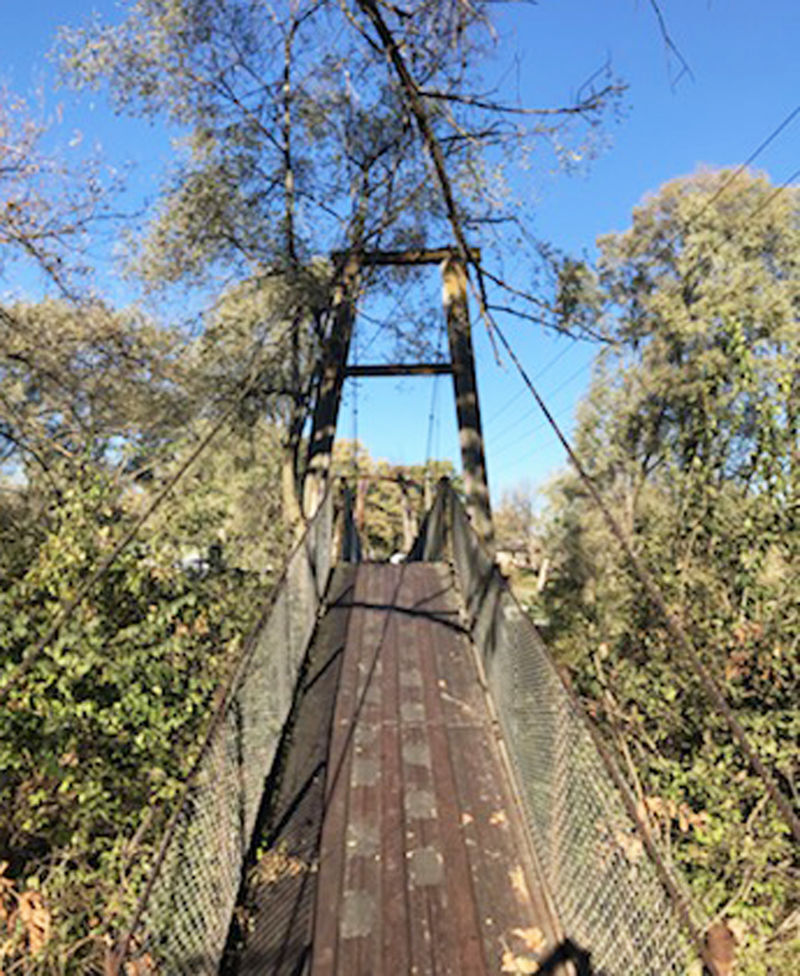 A swinging bridge that Weeping Water children used to get to school quicker is part of a new history trail being developed for visitors and residents to learn more of the community's history. 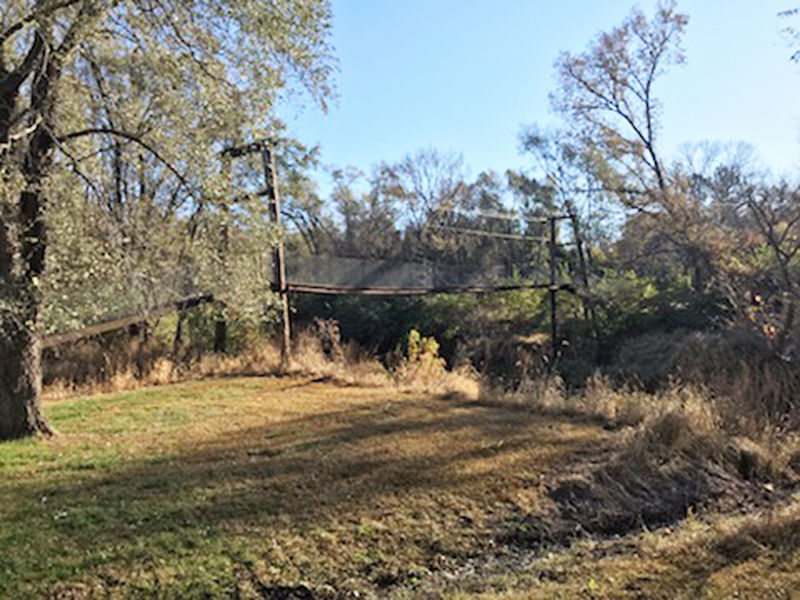 A swinging bridge over Weeping Water Creek is among 14 stops on a new historic trail allowing visitors and residents a chance to learn more of the community's history.

WEEPING WATER – Take a walk back in time.

Plans are in the works to do that in Weeping Water.

Several years ago, Don Jewell returned for a high school reunion and was so impressed with the beauty of Weeping Water.

“I was astounded by the beauty of the trees, the hills and the water in the community,” Jewell said.

“I thought we ought to do something to share it,” said Jewell, who is now again a resident. “I thought it would be nice to share it with other people.”

Jewell, along with Jon and Suzy Oliver, are in the process of creating the Weeping Water Historic Trail Walk, a three-mile route highlighting more than a dozen locations with historical significance to the growth of this central Cass County community.

“We’re hoping to attract a lot of visitors,” said Jewell, a member of the Weeping Water Historical Society, along with the Olivers.

It would also be a nice way for local residents to learn more of the community’s past, he added.

“I learned a lot about Weeping Water that I didn’t know prior,” Jewell said.

There are to be 14 stops along the circular route with each of them having signage telling a brief history of that location.

While people could start anywhere along the route, Jewell recommended beginning along Weeping Water Creek at the cabin site of the area’s first resident – Elam Flower.

From there, people can walk to the Weeping Water City Lakes to view a newly-installed lighted fountain to honor early settlers, plus those involved with the city’s historical society.

“It’s more of a floating fountain that shoots water 30 feet into the air,” Jewell said.

Other stops along the way include an early 1950s swinging bridge across Weeping Water Creek that children once used as a quick route to school. People can walk on the bridge, though they would need to turn around since the other side lands on private property, Jewell said.

The trail stops at the site of a former Civilian Conservation Corps headquarters where World War II conscientious objectors were trained for medical duties, in place of bearing arms.

It would later become a prisoner of war camp with up to 120 German soldiers housed there as the war went on.

From downtown, people can walk up 74 tree-lined steep steps to Oakwood Cemetery where early settlers are buried.

Of course, no local history tour would be complete without a stop at the office of Dr. Jesse Fate. One day in 1929, Fate closed his office at the end of the day, went home, became ill and died.

His office and adjacent waiting room have been kept the way they were when Fate closed the door for what would be the last time.

Several museums are also on the route, Jewell said.

Small portions of the trail are on grass, but mostly it’s cement, according to Jewell.

Some of the historical signs still need to be made before the project is completely finished.

“We hope to have it ready in the next three weeks,” Jewell said. “People are excited about it.”

Murray man charged with cruelty to an animal

MURRAY – A 52-year-old Murray man has been arrested on one count of intentional cruelty to an animal.

MURDOCK – Gus Pope has kept his personal calendar filled with a lengthy lineup of activities during his high school career.

COVID-19 stats continue to be grim

PAPILLION – The latest statistics on COVID-19 in Cass County continue to paint a grim picture.

PLATTSMOUTH – An Omaha man will face a reduced bond for allegedly committing his third drunk-driving offense in Cass County earlier this fall.

PLATTSMOUTH – A man who allegedly threatened a woman with a screwdriver in Cass County has been found incompetent to stand trial on four charges.

PLATTSMOUTH – Jacob Zitek has produced an ocean-sized amount of accomplishments with his work ethic, strong character and attention to detail.

PLATTSMOUTH – Here’s the scene… (and unfortunately, it does happen from time to time.)

A swinging bridge that Weeping Water children used to get to school quicker is part of a new history trail being developed for visitors and residents to learn more of the community's history.

A swinging bridge over Weeping Water Creek is among 14 stops on a new historic trail allowing visitors and residents a chance to learn more of the community's history.