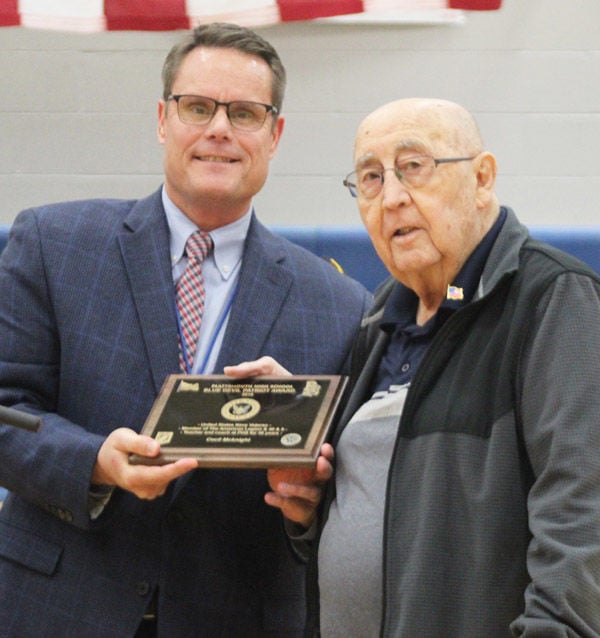 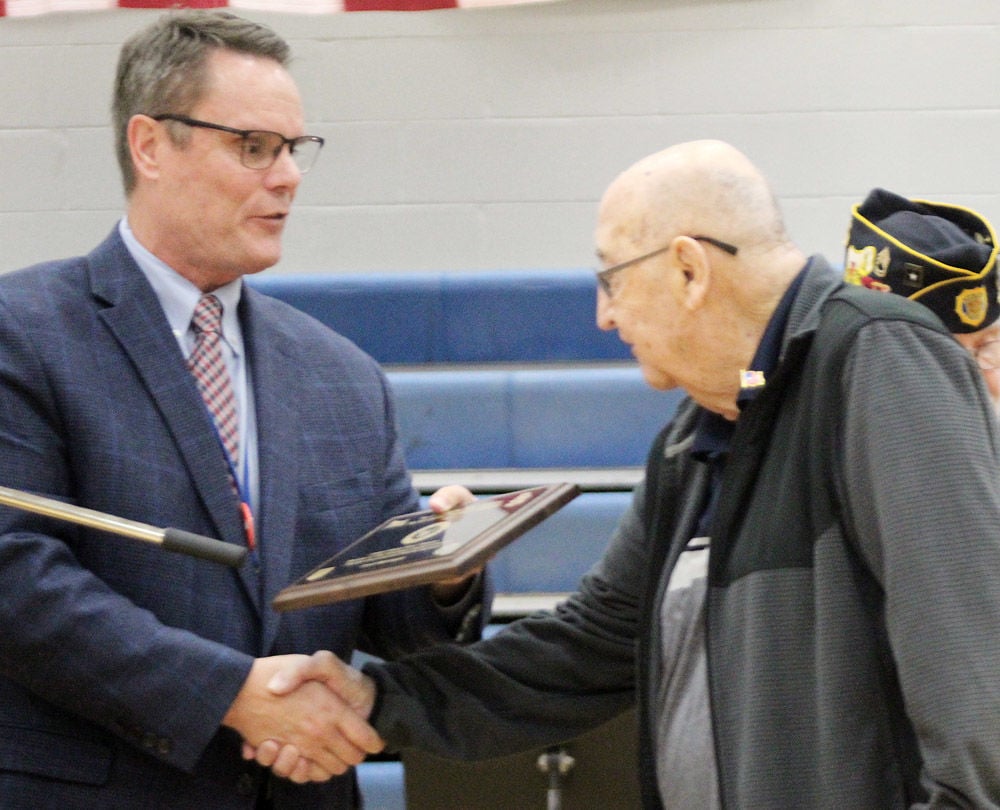 PLATTSMOUTH – Cecil McKnight collected many awards during a distinguished teaching and coaching career in Plattsmouth that lasted nearly four decades.

He was honored for his service to both the country and Plattsmouth with a special plaque Monday morning.

McKnight accepted the Blue Devil Patriot Award during a Veterans Day ceremony at Plattsmouth High School. The award honors people who have served in the military and made significant impacts in the Plattsmouth community. Hundreds of students and area residents gave McKnight a loud ovation during the presentation event.

“I can tell you that there are hundreds of people who can say that they built something in their house or in their shop because of Cecil,” Halvorsen said. “We have a true legend right here.”

McKnight was born and raised in Nebraska City and graduated from Nebraska City High School in 1946. He participated in band, football, basketball and track and field at NCHS. He joined the U.S. Navy after graduating and was stationed on the West Coast of the United States for two years.

He graduated from Peru State College in 1952 and spent two years teaching and coaching in the western Nebraska town of Morrill. He and his family then moved to Plattsmouth after he accepted a position in the school district.

McKnight was an assistant coach for the varsity football and boys basketball programs and spent time coaching junior high boys basketball. He began coaching cross country in 1972 and enjoyed a large amount of success in the sport.

The Plattsmouth boys won Class B state titles in 1973, 1974 and 1975 and Pat Griggs claimed the individual Class B championship in 1975. McKnight’s teams won seven district championships and 31 regular-season cross country meets. The Blue Devils finished second in 28 other regular-season meets.

McKnight coached track and field for many years and helped the Blue Devils capture a host of team and individual honors. The Plattsmouth boys earned the 1976 Class B state team title and finished second at three other state meets. PHS collected 13 conference championships, 13 district titles and first-place plaques at 48 regular-season meets.

McKnight spent many summers helping with civic organizations in Plattsmouth. He taught driver’s education classes for 24 years, volunteered with summer youth baseball programs, led a Boy Scouts troop and volunteered for high school band fund-raisers. He participated in many activities at the First United Methodist Church in Plattsmouth and was a member of groups such as American Legion Post 56 and Eagles Aire 365.

“He is well known for his work at the United Methodist Church,” Halvorsen said. “There are countless other community activities that he has been involved with over the years.”

The Blue Devil Patriot Award presentation took place in the middle of Plattsmouth’s Veterans Day ceremony. The morning event featured patriotic songs, two keynote speeches and recognition of students who will be joining the military after graduation.