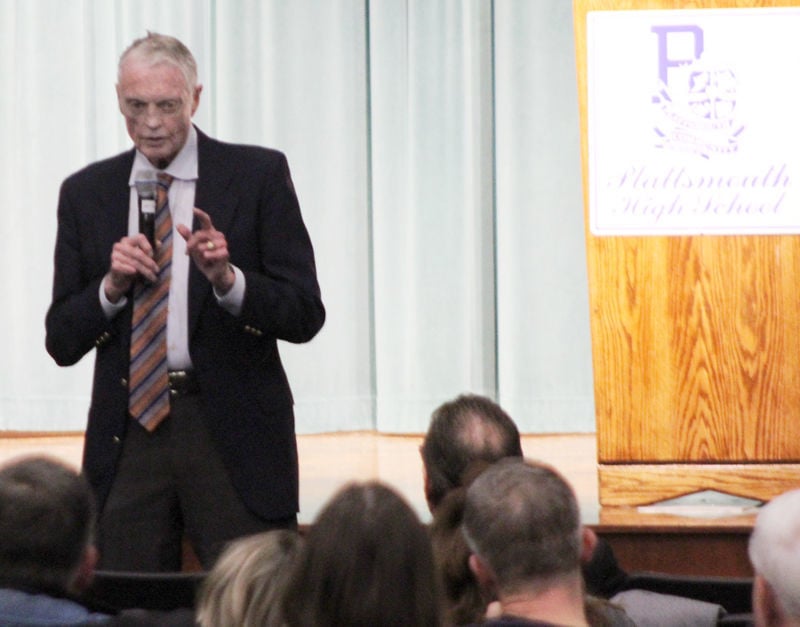 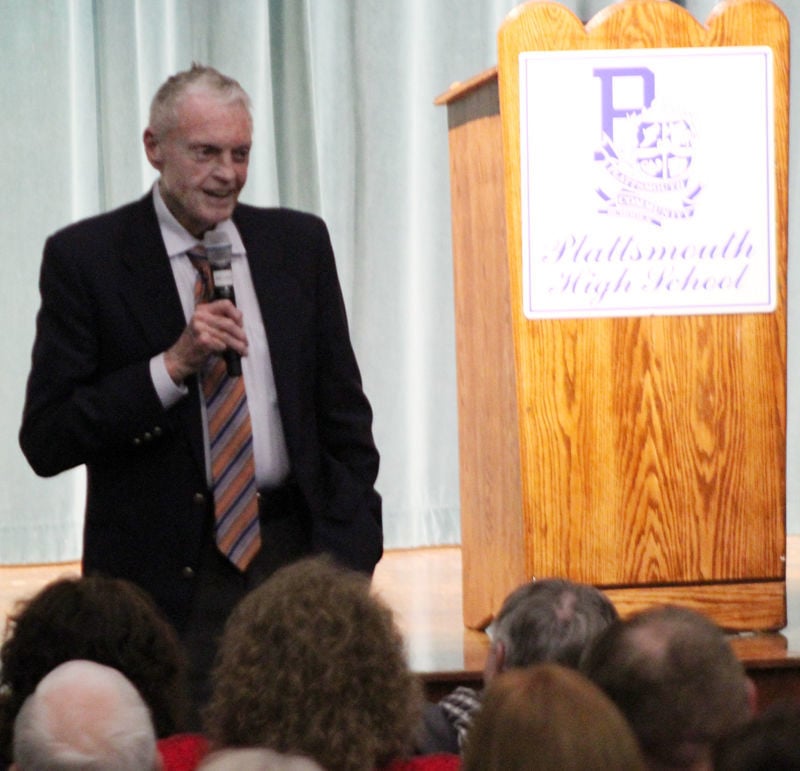 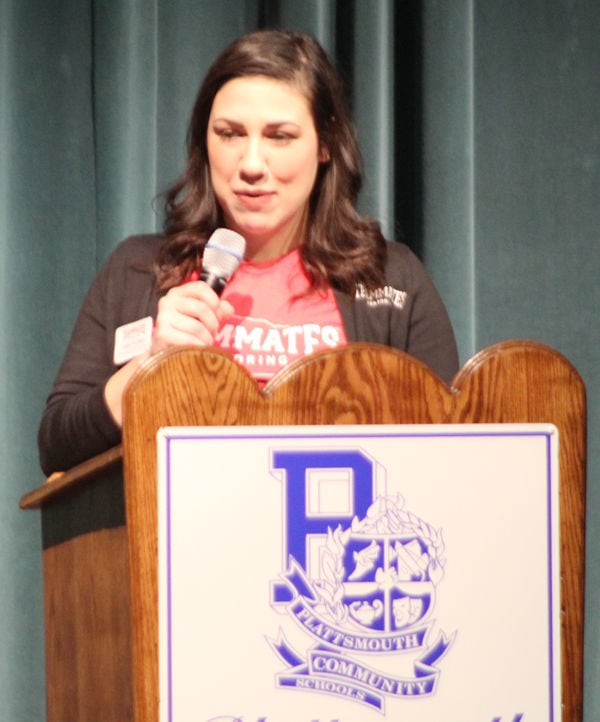 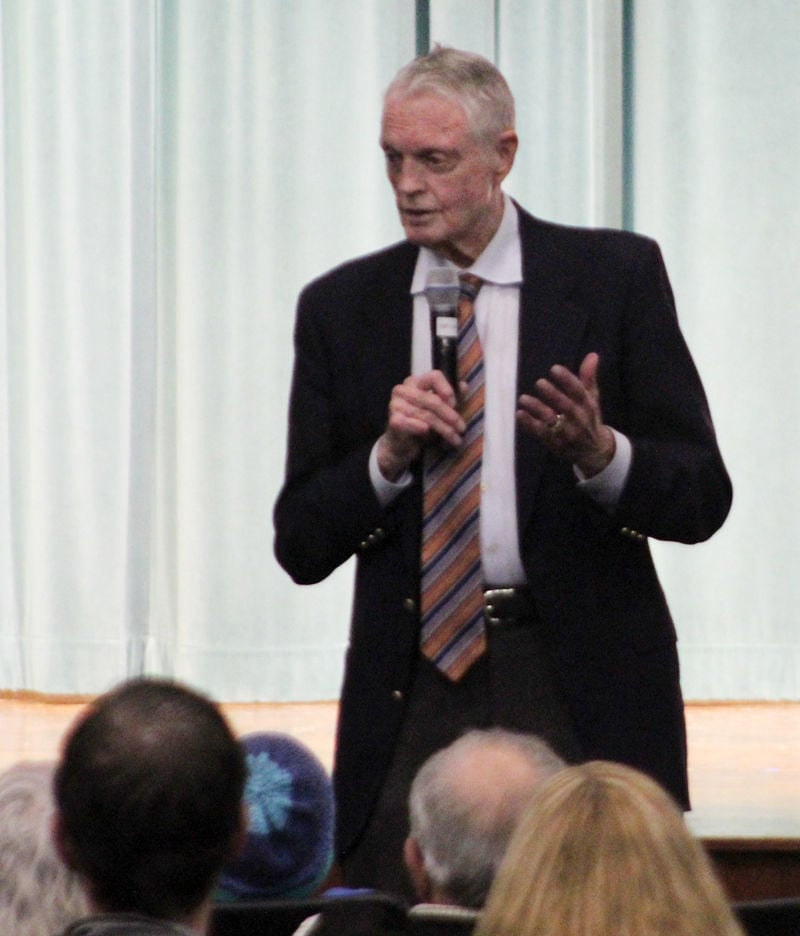 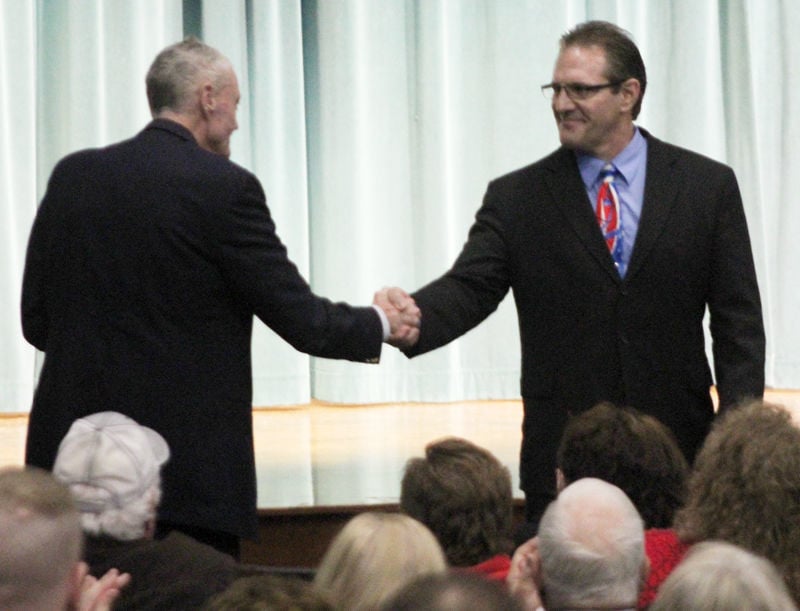 He brought his message of positive partnerships to Plattsmouth on Thursday night in an effort to increase the number of mentors in Cass County.

Osborne was the featured speaker at a Plattsmouth TeamMates event in the high school auditorium. Approximately 75 people came to hear him talk about his experiences leading one of the largest mentoring programs in the country. He told audience members their time and talents were vital to improving lives of many young people in their communities.

“If you change one life for the better, you don’t just impact their life,” Osborne said. “You impact all of the people around them.”

Plattsmouth TeamMates leaders wanted to raise awareness about the mentoring program and invited Osborne to speak on the subject. Plattsmouth TeamMates Coordinator Dr. Richard Hasty said the local chapter would like to see additional participation over the next few months. The group would like to reach 100 mentoring partnerships between adults and students as the school year progresses.

“We have approximately 80 mentors right now, and we’re always looking for more,” Hasty said. “Everybody in this room had someone who helped them get to where they are now. We can all think back to when we were kids. We might not always have wanted to talk about things with our parents, but we all had another adult mentor in our lives who we could trust as well when issues came up. That’s exactly what the TeamMates program is all about.”

Osborne and his wife Nancy founded TeamMates in 1991 with a goal of helping the community. They felt the football players he was coaching at the University of Nebraska-Lincoln could make positive impacts on students at local middle schools. Twenty-two players became mentors to junior high students and helped inspire many of the children to have successful careers.

Twenty-one of the 22 students graduated from high school and 18 went on to attend college. Osborne decided to expand the program after seeing those positive results. TeamMates now has dozens of chapters across the Midwest and serves 10,400 students in 170 school districts.

The audience first heard from Anna Flores, who serves as a training and match support specialist at the organization’s Omaha office. Flores gave her testimony about growing up in Crete in a difficult family situation. Her middle school physical education teacher became her mentor and helped her gain confidence as a teenager.

“The most memorable times were just walking on the track together,” Flores said. “We would walk and I would talk and she would just listen.”

Flores attended Doane University and participated in journalism and theater. She said being involved in the TeamMates program both as a student and now as an employee means a great deal to her.

“Advocacy holds a dear place in my heart,” Flores said. “When I saw this opening for a TeamMates position I knew it would fulfill the need to give back to the community.”

Osborne told the audience he was encouraged by stories from current and former mentees like Flores. He said students who take part in the program are 56 percent more likely to attend college and have a 95-percent high school graduation rate. He said the mentorships have also provided rays of hope to students who come from all walks of life.

“Hope is so important,” Osborne said. “If you don’t have hope, you’re going to fill your life with something else, and it’s generally not going to be good.”

Osborne said TeamMates mentors meet with students once per week at their middle or high school building. Many spend approximately 30-60 minutes each week together in an unstructured format. They can play games, spend time talking with each other or take part in an activity both enjoy.

Osborne said mentors do not have to have any special skills or knowledge in order to serve. They simply have to be willing to share their time with the other person.

“The most precious gift you can give is not monetary,” Osborne said. “We can always make more money and spend that on others, but none of us can make more time. The gift of your time is the most valuable gift we can give another person.”

Osborne ended his speech by sharing how mentoring had affected his own family’s history. His grandfather grew up in western Nebraska on a homestead. Osborne’s great-grandfather had served in the Union Army and settled in Nebraska after the Civil War. He developed a drinking problem that often disrupted the family’s life.

In those days circuit preachers traveled to different towns delivering sermons each week. The circuit preacher noticed his grandfather’s speaking abilities and became a mentor to him. He encouraged Osborne’s grandfather to attend high school with a goal of eventually becoming a preacher himself.

Osborne’s grandfather earned a degree from Crawford High School and went on to attend Hastings College. He eventually became a preacher, served in the state legislature and raised a family that passed down a love of learning to Osborne.

“If that circuit preacher hadn’t become a mentor to my grandfather, then who knows what would have happened?” Osborne said. “It wasn’t just about one mentor and my grandfather. There was a ripple effect that happened because of that.”

Osborne encouraged those in the audience to consider creating their own ripple effects by becoming mentors. He said many Cass County residents would benefit from their choice to serve others.

“Maybe the most important thing a mentor can provide is simply a vision of what’s possible,” Osborne said. “Doing that can lead to so many good things for people.”