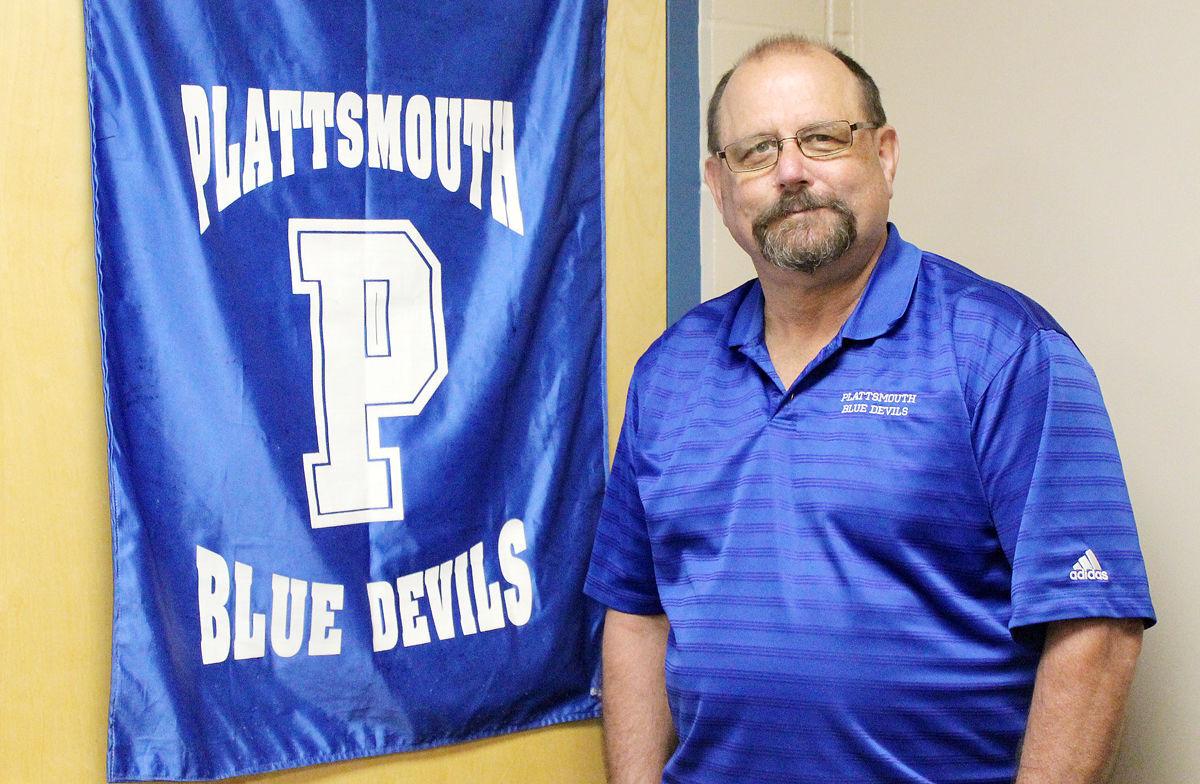 Mark Smith stands next to a Plattsmouth banner in his middle school office. Smith has been principal of Plattsmouth Community Middle School since 2001 and has been in the educational field for 33 years. He will retire this week after serving in teaching, coaching and administrative roles in the district. 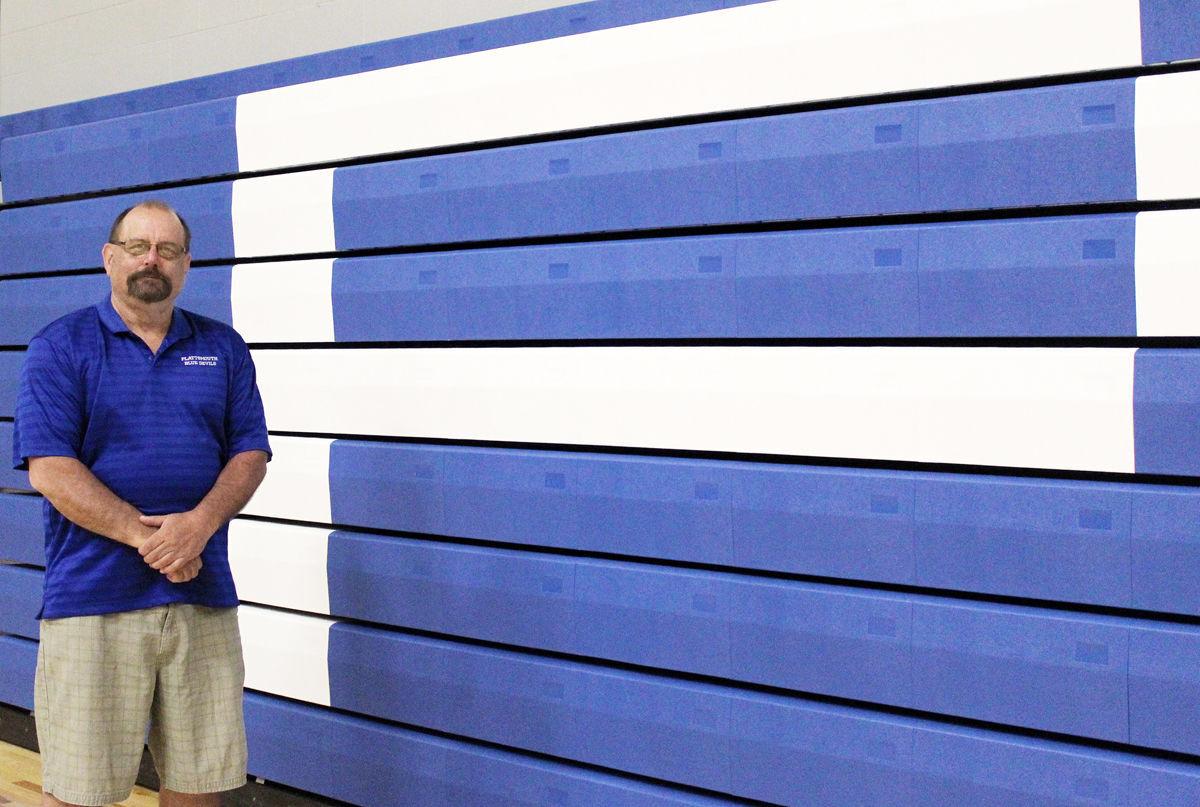 Mark Smith stands next to new bleachers in the renovated PCMS gym. He has worked in Plattsmouth for the past 26 years and has spent more than three decades as an educator. He also spent 19 years officiating youth wrestling matches across eastern Nebraska.

PLATTSMOUTH – Mark Smith has adopted a motto of doing whatever it takes to help students succeed at Plattsmouth Community Middle School.

He has achieved that goal for a generation of local children who have walked through the school’s hallways.

Smith will be retiring from his administrative role in Plattsmouth this week. He has been in the educational field for 33 years and has been at Plattsmouth for the past 26 years. He has served as PCMS principal since 2001.

“It just felt like it was the right time to go,” Smith said. “I thought it was time to go do something different. I know I want to continue to be involved in the community, but whether that’s with the school or in some other capacity I’m not sure yet.”

Smith graduated from Falls City High School and earned a bachelor’s degree in education at Peru State College. He said his love of sports convinced him to pursue a career as a teacher and coach.

“Athletics was the reason I wanted to get into teaching,” Smith said. “I really enjoyed being involved in sports in high school, and I thought it would be great if I could keep doing that.”

Smith was hired at St. Edward Public Schools after college and spent seven years there as a physical education teacher and coach. He accepted a job in Plattsmouth in 1994 and coached several sports for the Blue Devils. He said he enjoyed working with students in that leadership capacity.

“It was hard to give up coaching,” Smith said. “I was the head wrestling coach at the time, and that group of seniors was a great group of kids. Part of me wanted to keep going in coaching, but you don’t turn down an opportunity like the one I was presented here. It’s turned out well.”

Smith has handled a variety of tasks during his two decades as PCMS principal. He oversees dozens of staff members, handles student discipline, writes academic and budget reports, communicates with parents and attends meetings with other district officials.

Smith said the biggest difference between being a teacher and an administrator is the direct involvement teachers have with their students in the classroom.

“When you’re a teacher or a coach, you’re able to see the direct result of what you’ve done,” Smith said. “You can see that student make progress and see that athlete get better because you’re with them in your class every day. You’re in a position to get more feedback from them too, so you can know if things are going well or if there are things you need to work on more.

“When you’re an administrator you don’t get to see that as directly. You’re always wondering if you’re making a difference because you don’t get to work with kids as much, and then they go off to high school. Every now and again someone will come back and say something, and that’s a great feeling. That’s probably the most rewarding thing of this profession.”

People have also given Smith compliments for his work as a wrestling official. He began refereeing youth events in 2000 and continued that role until stepping down in 2019.

“I didn’t want to be the guy who hung on too long with officiating,” Smith said. “I could tell it was starting to get harder to do it from a physical standpoint, and I didn’t want to cost a kid a match because I couldn’t move the way I needed to. It was a lot of fun, but I knew it was time to give someone else a chance to do it.”

The coronavirus pandemic changed the final chapter of Smith’s administrative career this spring. Instead of completing their duties inside the PCMS building, staff members had to overhaul the entire learning environment in a short period of time. Smith said he will always remember the professionalism his co-workers displayed over the past three months.

“It certainly hasn’t been the way I thought I would end my career as a principal,” Smith said. “I wasn’t picturing having a bunch of Zoom meetings and not getting a chance to say good-bye to the kids. But it’s been memorable because of the way everyone here has reacted to it.

“They were able to drop everything they’ve been taught and get an online strategy and materials in place for the kids in one week. I can’t begin to tell you how proud I am for their work. They’ve done such a great job in a difficult situation.”

Smith said his co-workers have helped make his time at Plattsmouth memorable in many ways. He said their talents had inspired a generation of students to become successful.

“The people who I’ve been fortunate enough to work with have been pretty amazing,” Smith said. “I’ve been blessed to have this many good teachers and support staff be in this building. They’re exceptional at what they do and they care about all of the students.

“We’ve had a motto here of ‘Whatever It Takes,’ which means that everyone here is going to do their best to help the kids that come through these doors. I’ve seen that so many times from teachers and support staff here. It’s been special to watch.”

Motorists pull man from fiery vehicle on Sunday near Avoca

ASHLAND — A 26-year-old Iowa man was arrested in Ashland Sunday morning for chasing a woman with a sharp object while he was nude.

PLATTSMOUTH – A Plattsmouth man who helped a co-defendant steal tires from a Cass County business will spend the next two years on probation.

Progress continues for wastewater reopening, Memorial Park to get a little bigger

PLATTSMOUTH – The return of service by the Plattsmouth wastewater treatment plant is getting closer all the time.

Man cited for numerous infractions on Sunday in Louisville, including taking a street sign

LOUISVILLE — An Oklahoma man was cited on Sunday in Louisville on numerous infractions, including the unlawful taking of a street intersection sign.

PAPILLION – Cass County continues to show much lower numbers related to COVID-19 than Sarpy County, according to the latest figures.

MURRAY – Those who attended last Saturday’s fireworks show in Murray apparently had a blast.

Mark Smith stands next to a Plattsmouth banner in his middle school office. Smith has been principal of Plattsmouth Community Middle School since 2001 and has been in the educational field for 33 years. He will retire this week after serving in teaching, coaching and administrative roles in the district.

Mark Smith stands next to new bleachers in the renovated PCMS gym. He has worked in Plattsmouth for the past 26 years and has spent more than three decades as an educator. He also spent 19 years officiating youth wrestling matches across eastern Nebraska.