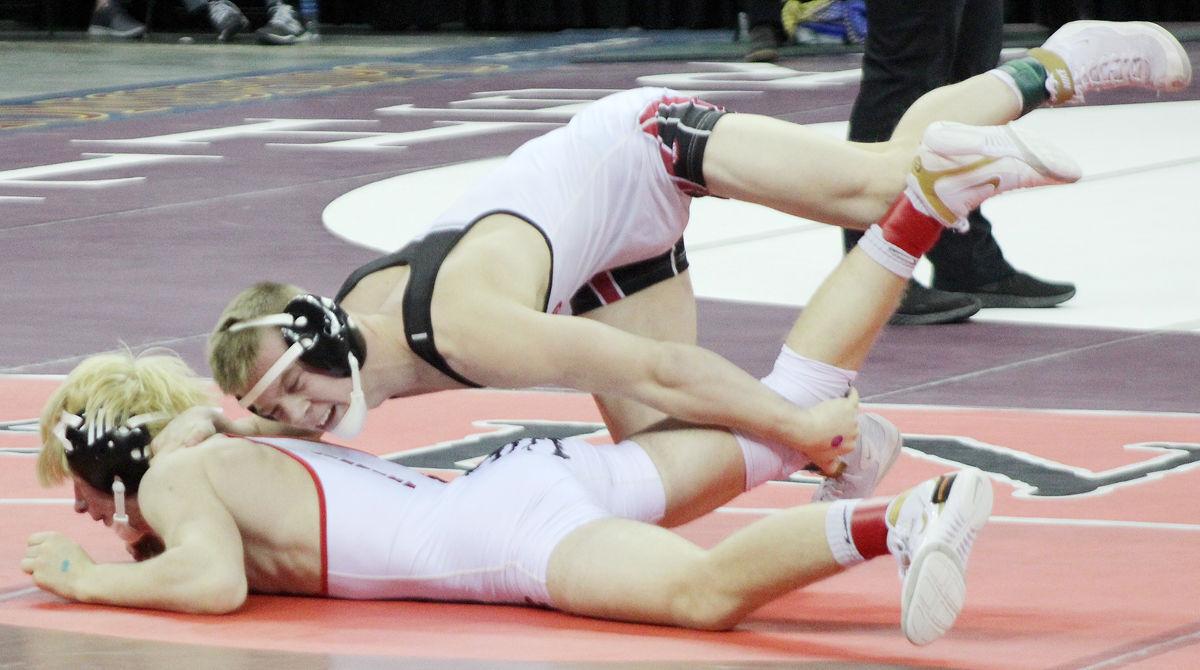 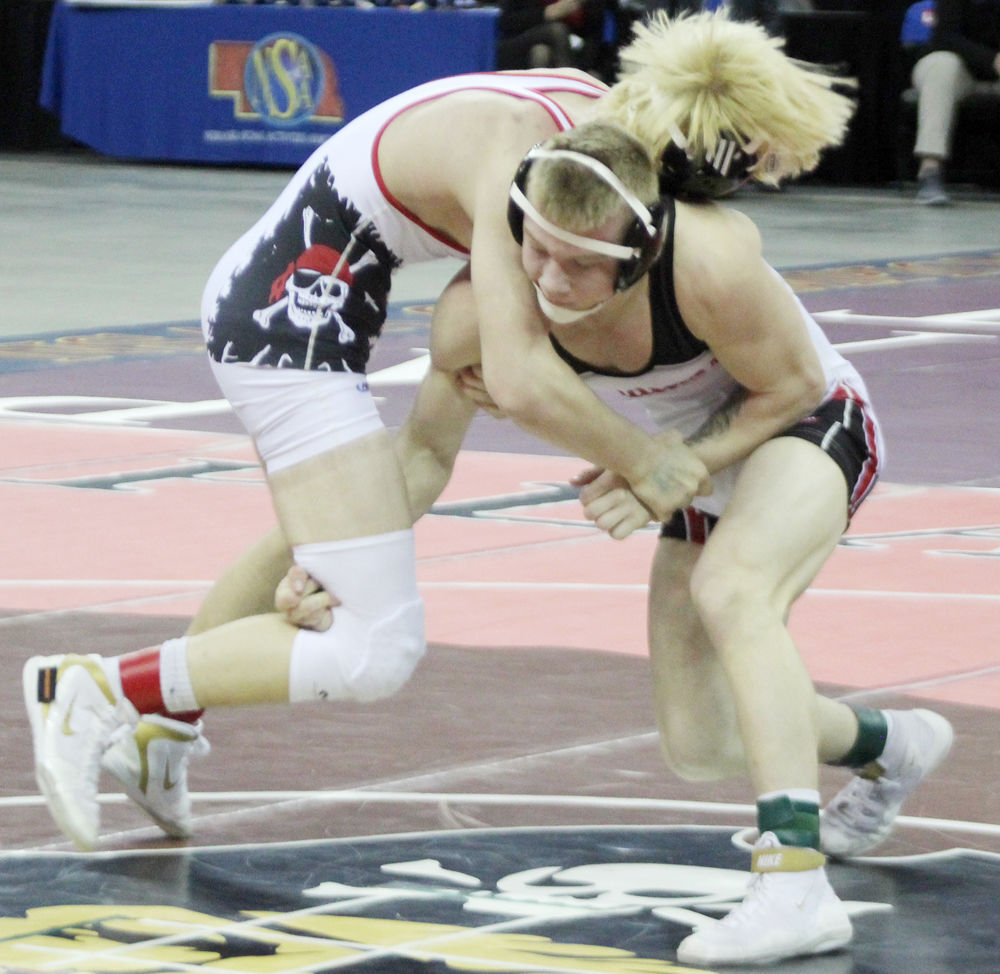 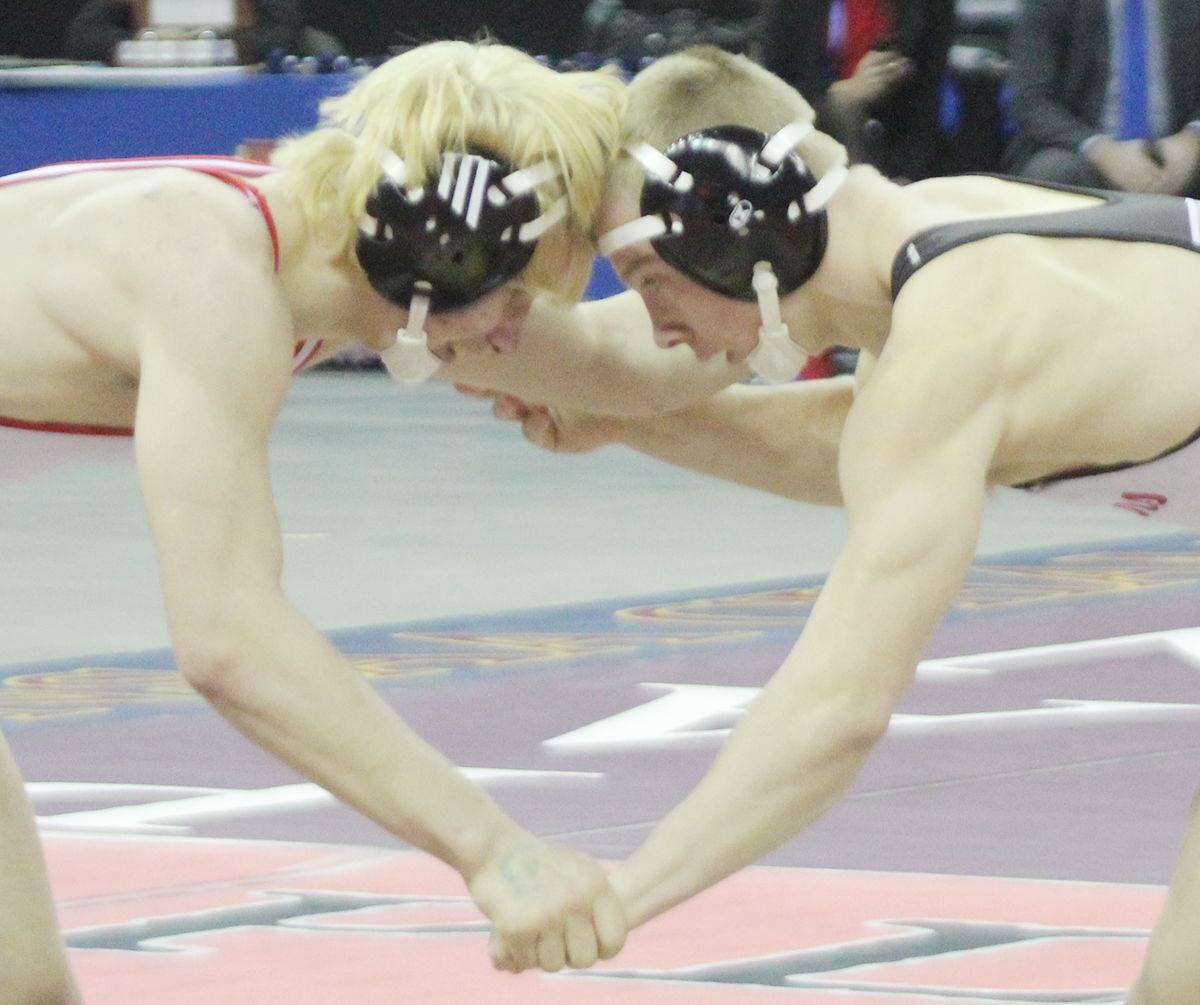 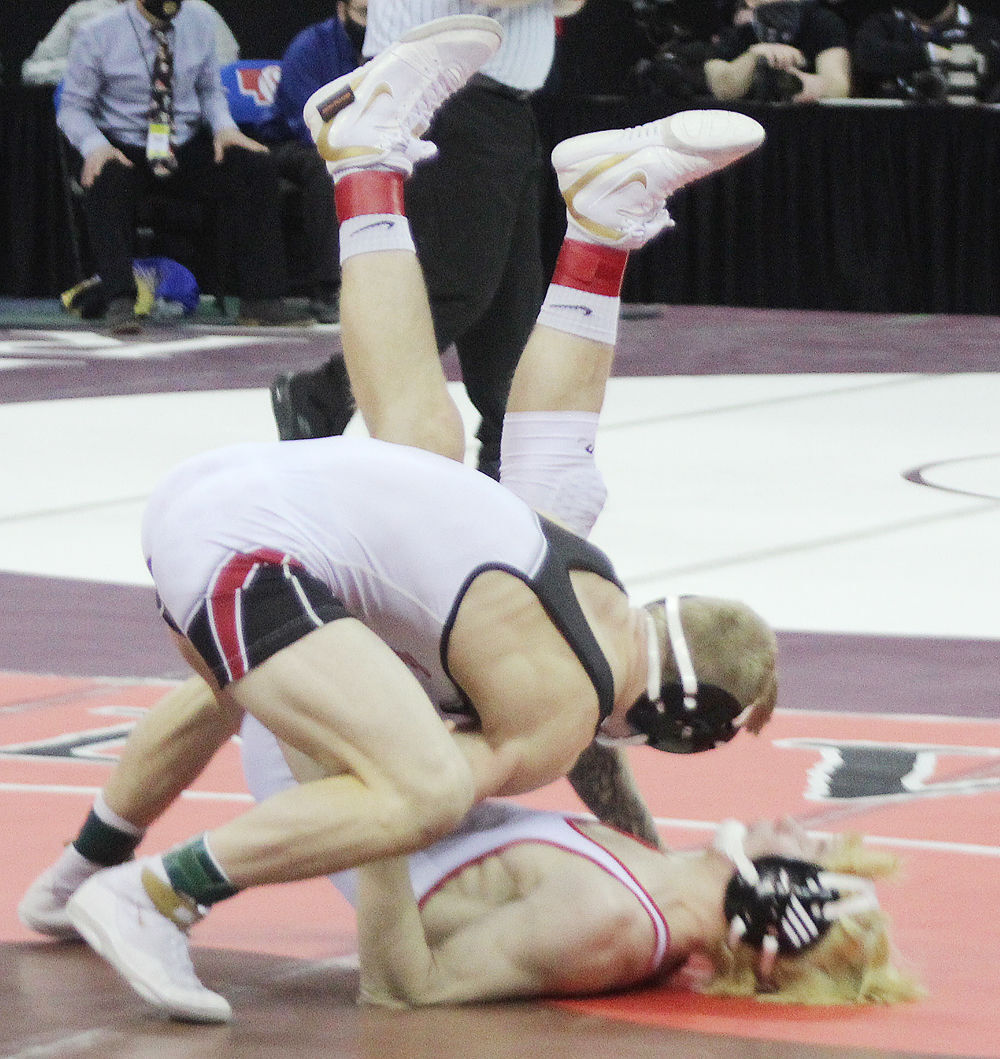 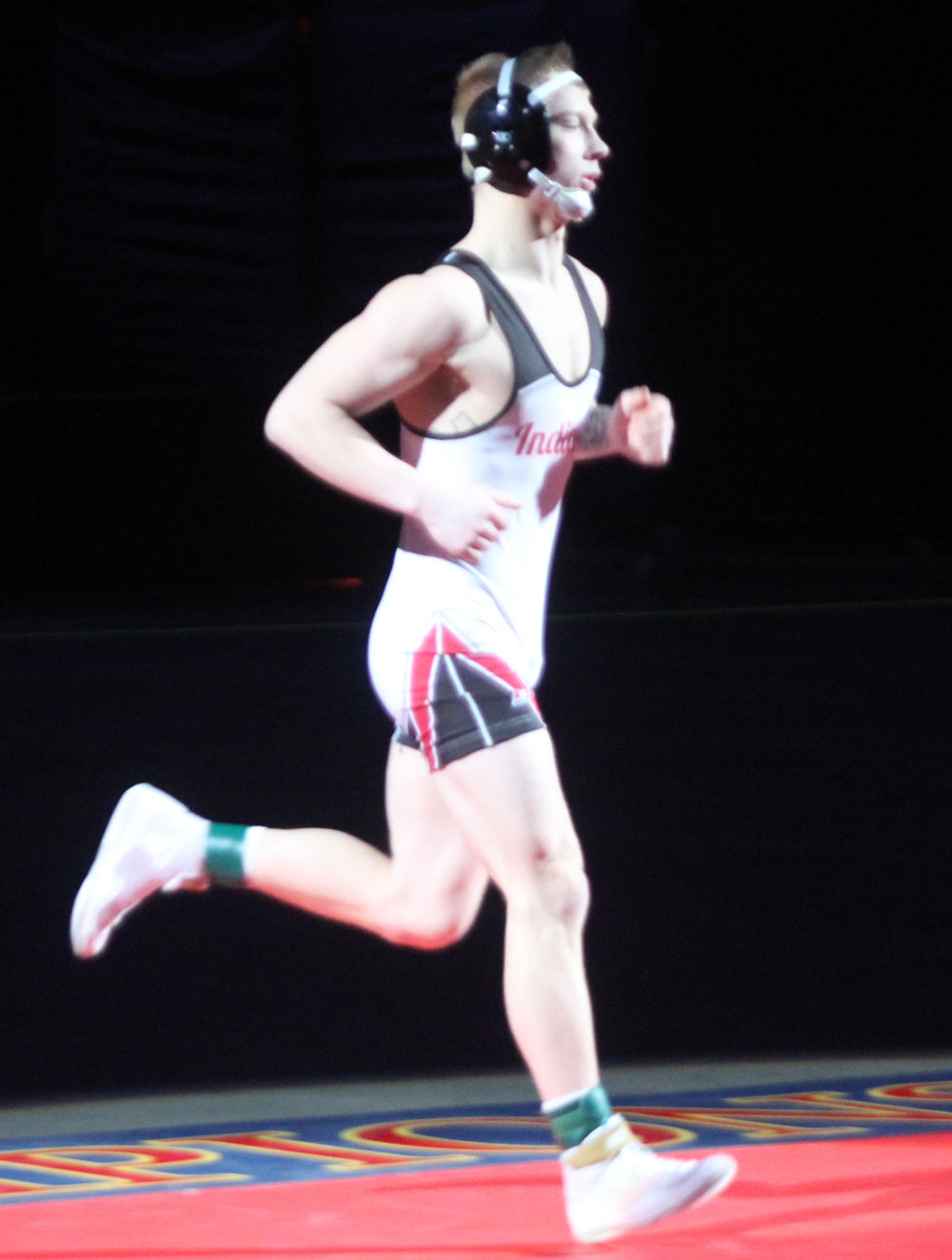 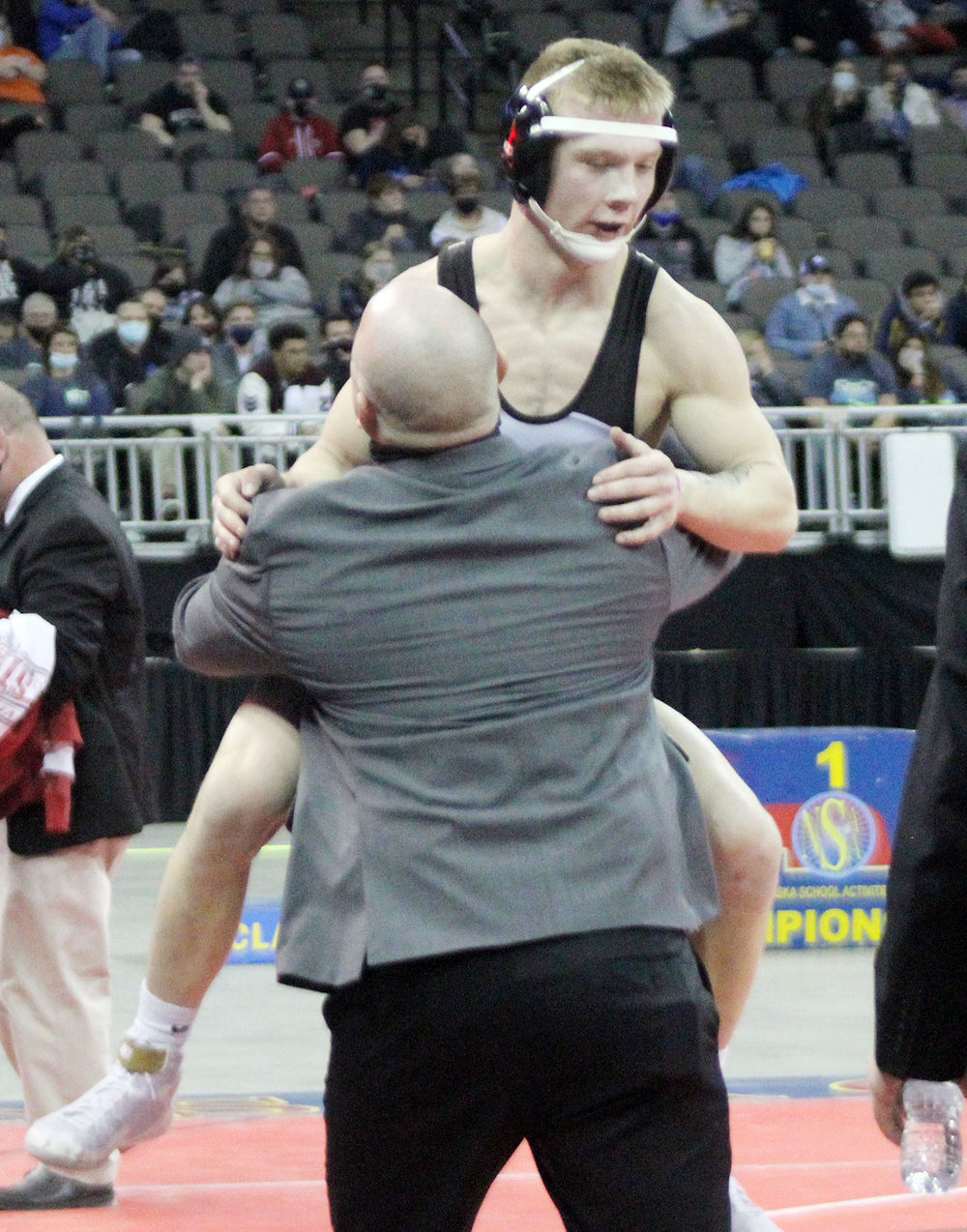 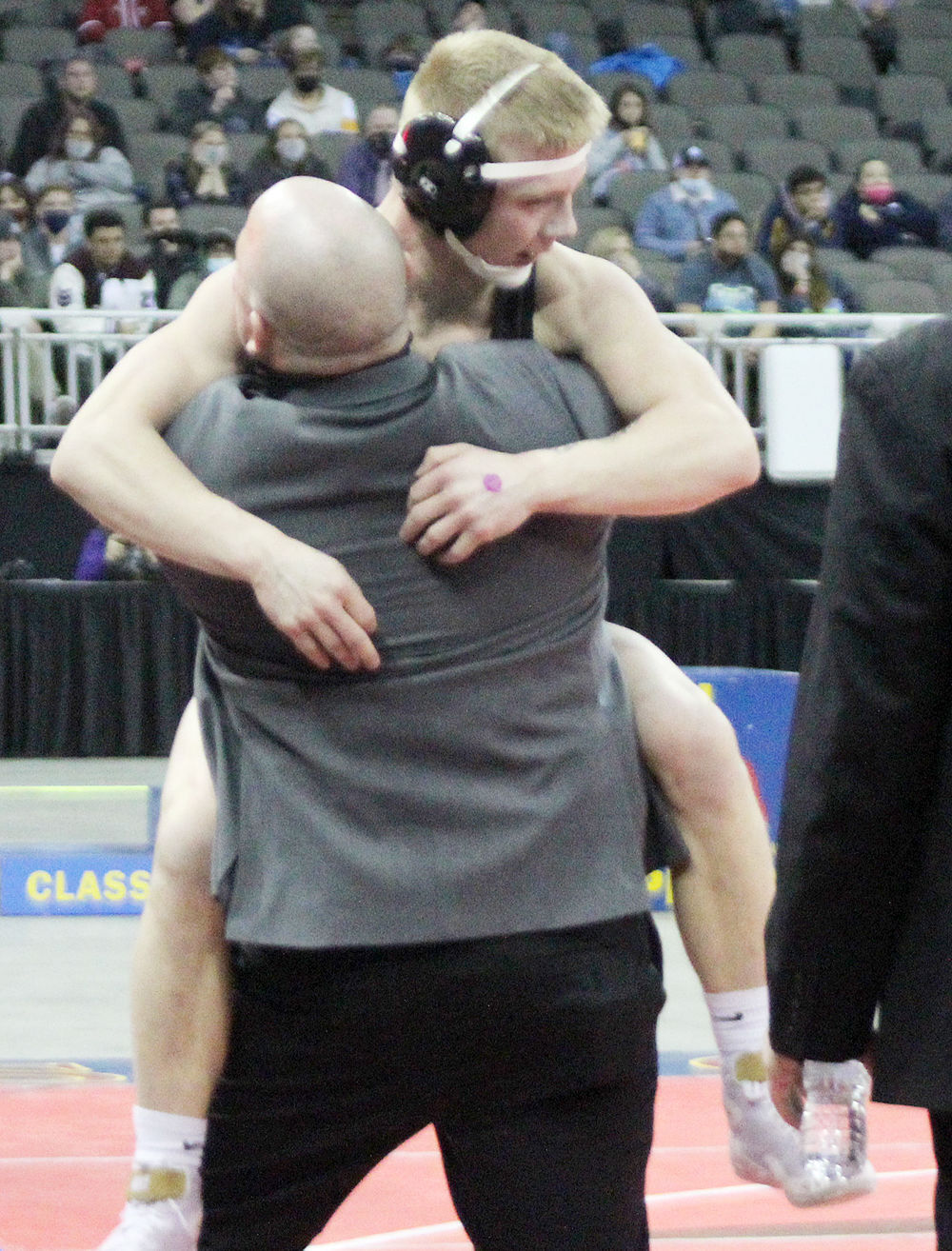 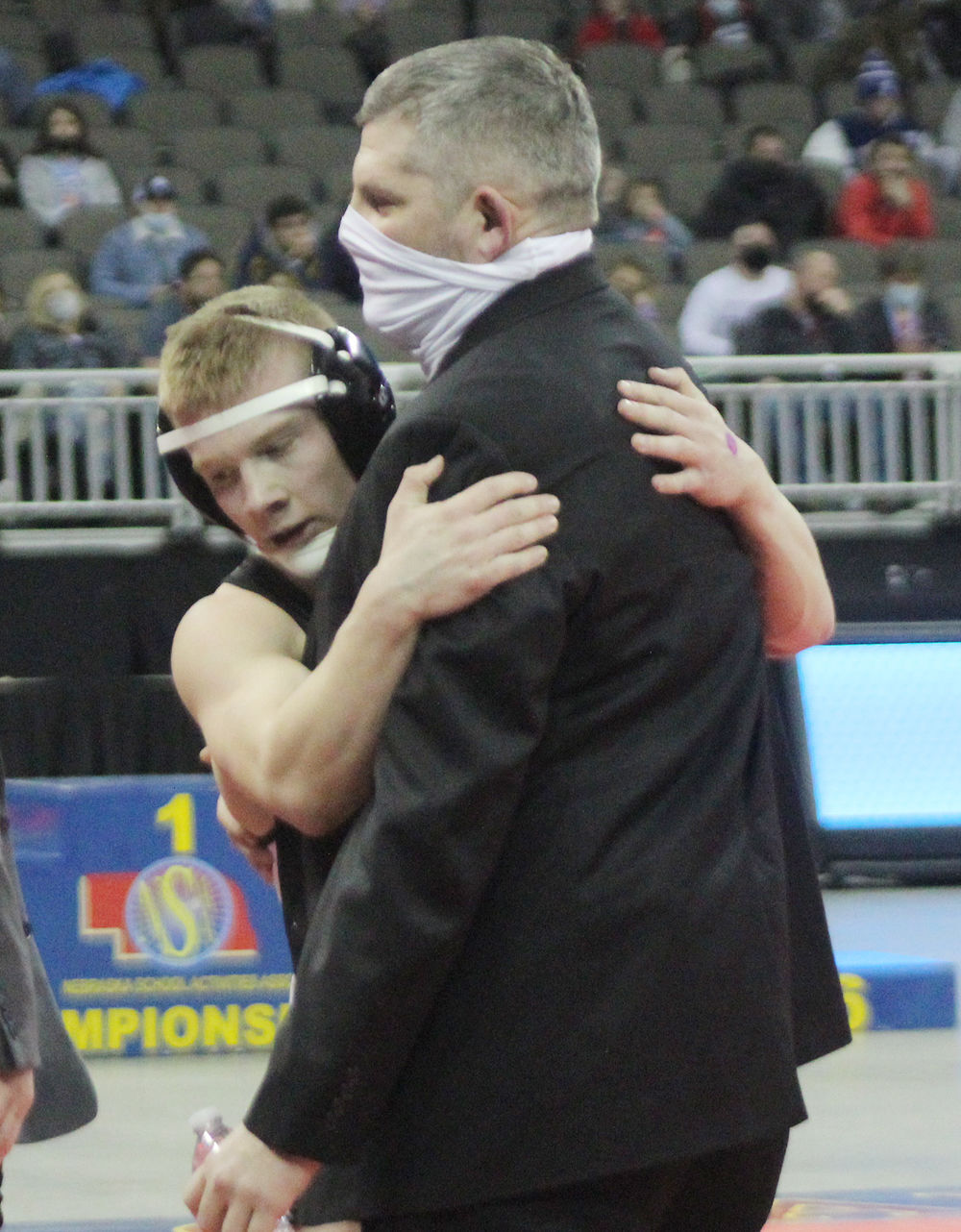 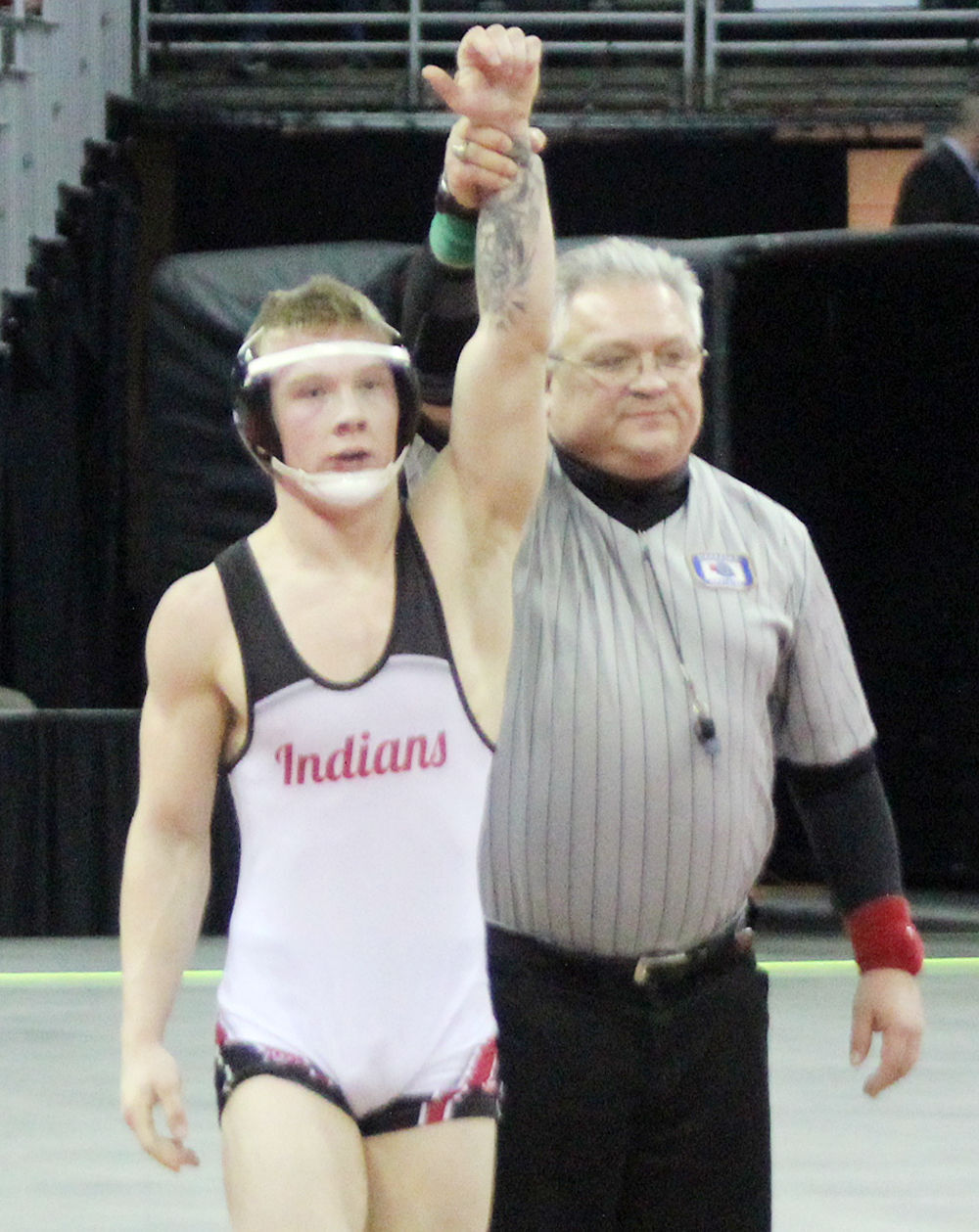 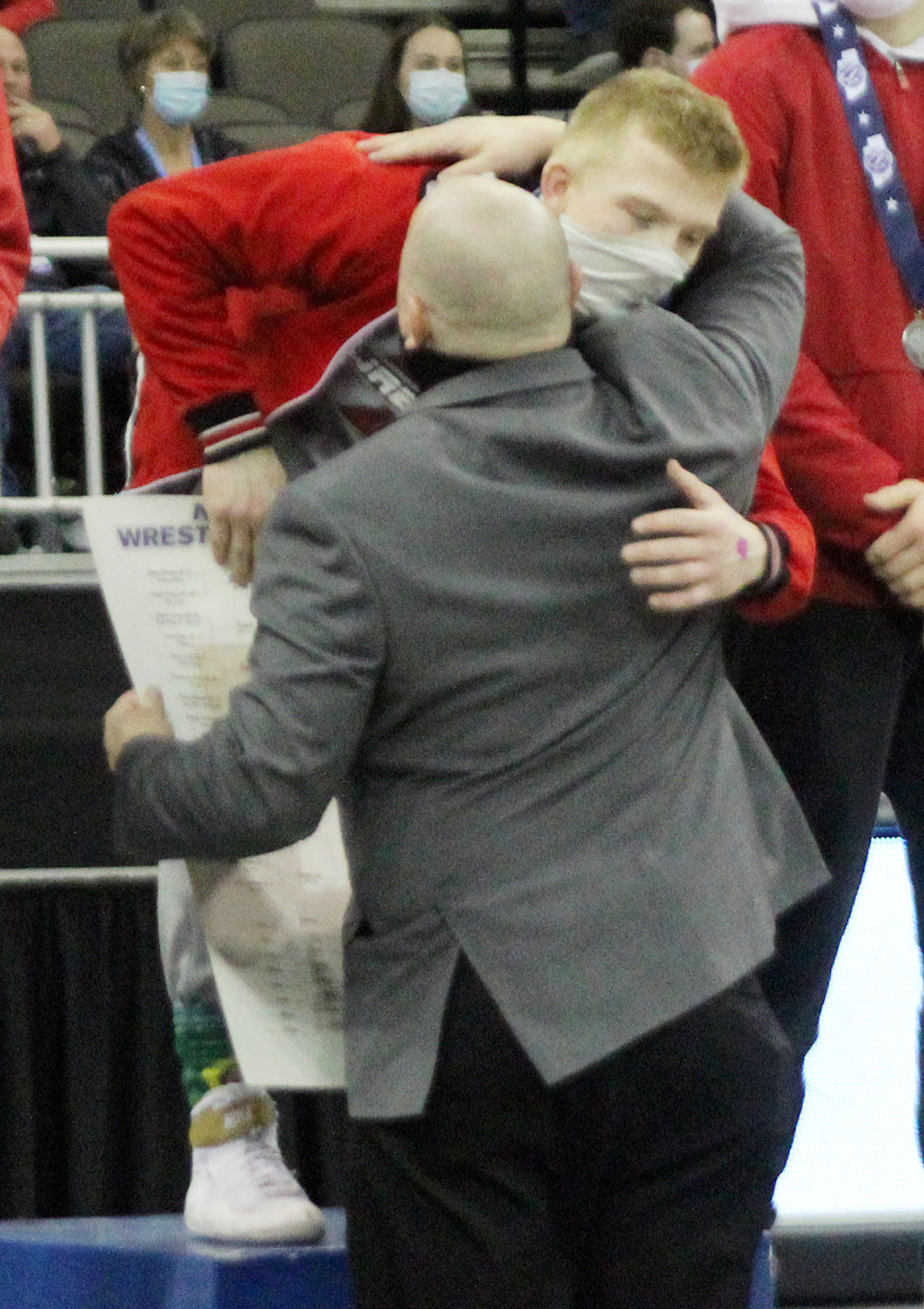 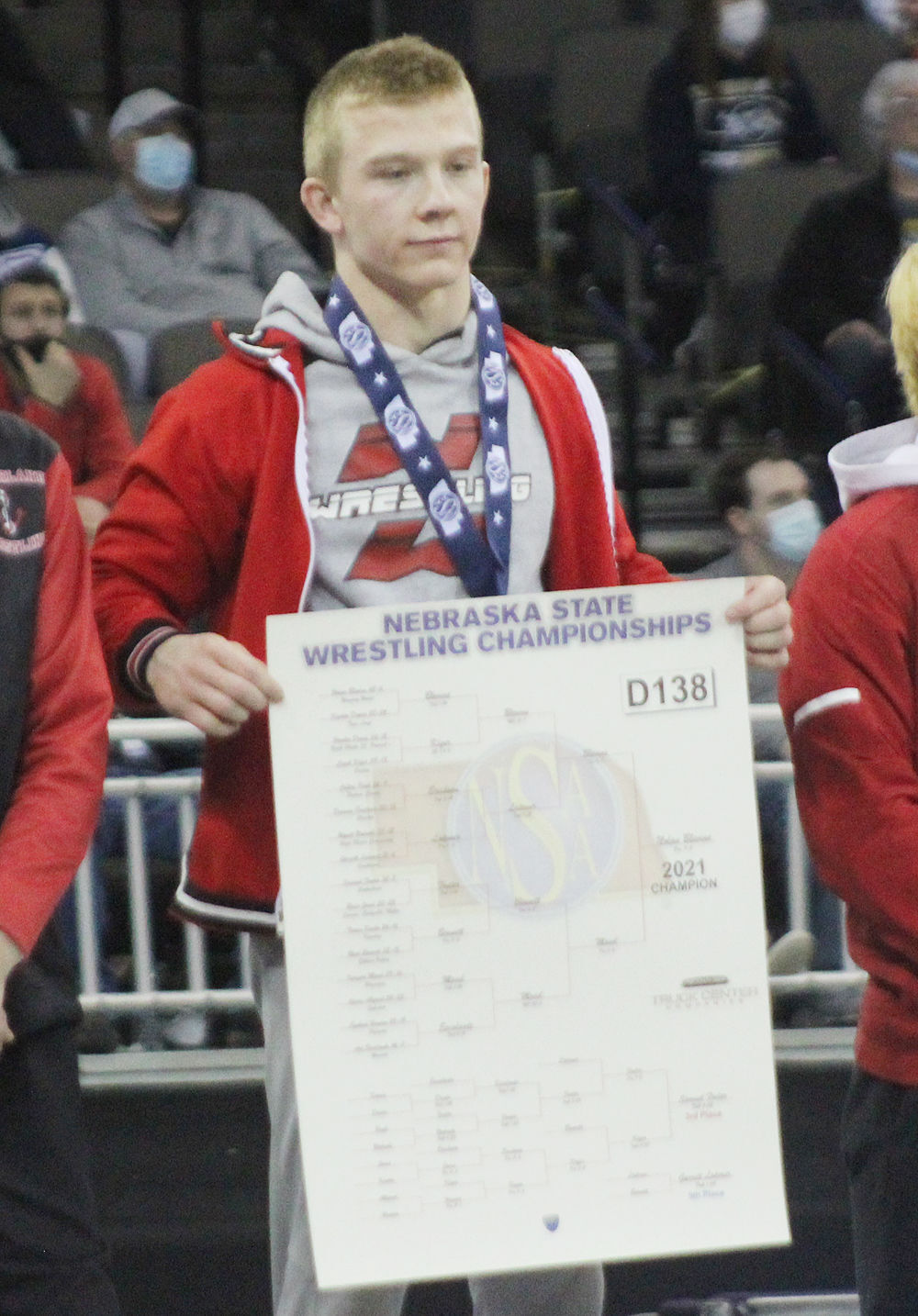 Weeping Water athletes who enter the room in future years will be able to view a new photo of Blevins hanging on the Wall of Champions.

Blevins became the 11th Weeping Water wrestler to win a state title with a 7-5 victory over Plainview’s Keagan Mosel on Thursday night. He ended his year 48-6 and made school history with his gold medal at 138 pounds. He and older brother Tyler became the first set of siblings to each claim state championships for the Indians.

Blevins said Thursday night that he was proud to continue Weeping Water’s tradition of excellence. He watched 2020 graduate Marcus Cave win a state title last year and said he wanted to be in the same position this winter.

“It feels amazing,” Blevins said. “I was with Marcus a lot last year in the practice room, and I knew how much he worked to get his state title, so I knew I had to put in the same amount of work this year if I wanted to win one too.

“It feels so good being able to do this for the school and town. It’s something I’ve always wanted to do ever since I was a little kid, so to be here standing now is pretty amazing.”

WWHS head coach Jeremy Strong said Blevins used a solid work ethic to reach the Class D mountaintop. He went 32-12 as a sophomore and finished third at state last year with a 33-8 mark. That fueled his desire to reach the title match this season.

“You could tell Nolan was going to be a good athlete from the time he was really little, but he had some growing up to do early on,” Strong said. “To his credit, he matured a lot over these past couple of years and he absolutely worked his tail off. He came into this season with a purpose, and he’s done everything right in terms of work ethic and leadership and being a good role model for others.

“I’m extremely proud of him. He worked incredibly hard and knew he wanted to get to this point, and he was able to do it. It’s really exciting.”

Blevins pinned Twin Loup freshman Keaton Dowse in 1:23 in the first round Wednesday night, and he followed that with a 15-7 major decision over Overton’s Cinch Kiger in the quarterfinals. He jumped ahead of Kiger 6-1 in the first 50 seconds and led 10-3 after the second period.

Blevins then faced a familiar opponent Friday afternoon in the semifinals. Top-ranked Garrett Latimer of Southwest (50-4) had squared off with Blevins in each of the previous two state tournaments. Blevins said that knowledge helped him collect his 9-5 victory.

“I’ve wrestled Latimer before at state, and I learned a lot from those previous times,” Blevins said. “I knew he was going to try to underhook me and get me off my feet, and I knew I couldn’t let him do that. I made sure I defended against that, and once I took that away, then I could start going to work on my own moves against him.”

Blevins trailed 5-4 early in the second period but jumped into the lead with 50 seconds left in the stanza. He posted an escape early in the third period and delivered a takedown with 47 seconds left to seal the victory.

“To have a chance to win a state title is where I want to be,” Blevins said after the semifinal. “It’s taken a lot of hard work, but it’s all paying off right now. I’ve just been trying to grind out wins all year and make the most of every opportunity I can get.”

Blevins then faced Mosel (39-10) for the state championship Thursday night. It was the third time the wrestlers had met in February. Blevins had won the previous two matchups in convincing fashion, but Strong said everyone knew the state contest would be a challenging one.

“Mosel’s very fundamentally sound, and he kept narrowing that gap each time we wrestled him,” Strong said. “We knew coming in here that Nolan would have to keep attacking and keep going at him, because Mosel’s talented enough to do a lot of damage.

“That kid is good, and he had a lot of motivation because Nolan had beaten him twice, so it took a lot of focus for Nolan to beat him again. I’m really proud of how he handled the situation and how he wrestled tonight.”

Blevins took a 2-0 lead in the first 20 seconds and led 4-2 after the first period. Mosel tried to pull off a comeback attempt by cutting the deficit to 7-5 late in the third period, but Blevins held him scoreless in the final part of the match to win by two points.

Blevins finished his career 137-32. He said he was thankful to join the row of championship faces hanging in Weeping Water’s practice facility.

“This is one of those nights that I’m never going to forget,” Blevins said. “To be able to do this just feels really good right now.”

CONESTOGA – The Conestoga girls marched to a winning beat Tuesday with plenty of scoring moments in their subdistrict title match.

Golfers from Elmwood-Murdock and Plattsmouth competed for conference prizes this week during a pair of league tournaments.

SYRACUSE – Conestoga and Louisville athletes climbed into winning elevations Saturday with peak performances at the conference track and field meet.