Become a Member
Read Today's E-edition
Share This
Knights, Cougars square off in district football game
0 Comments
Share this
1 of 10 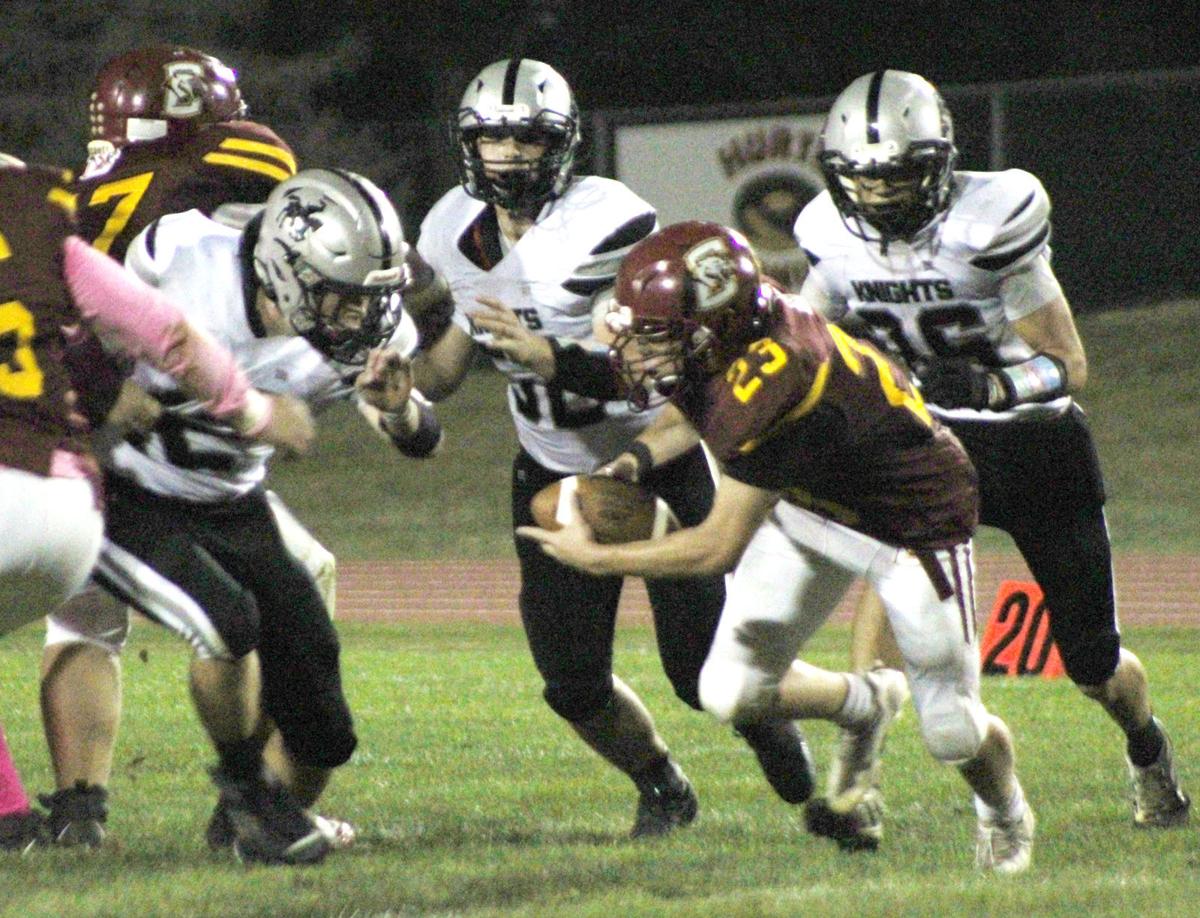 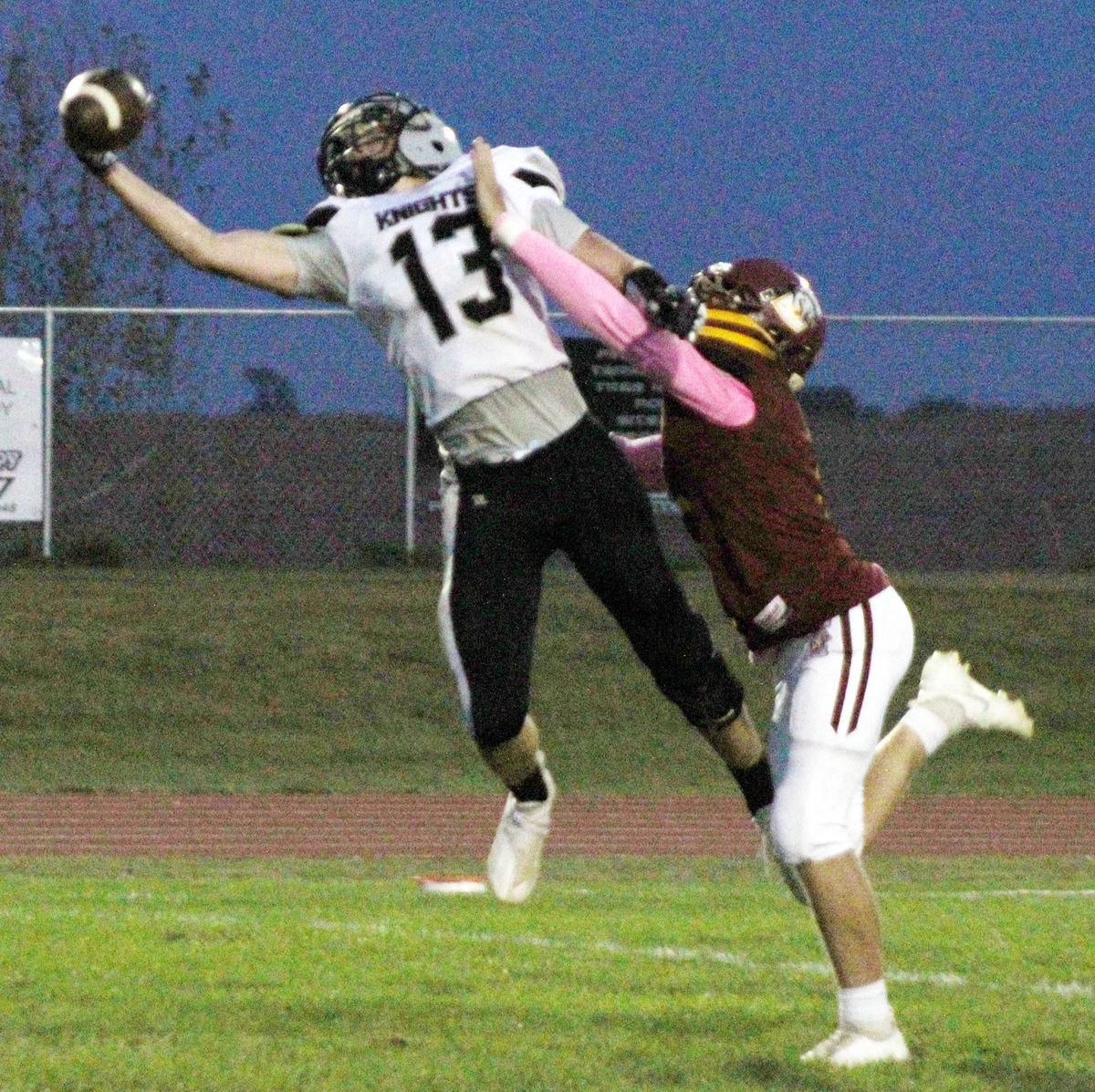 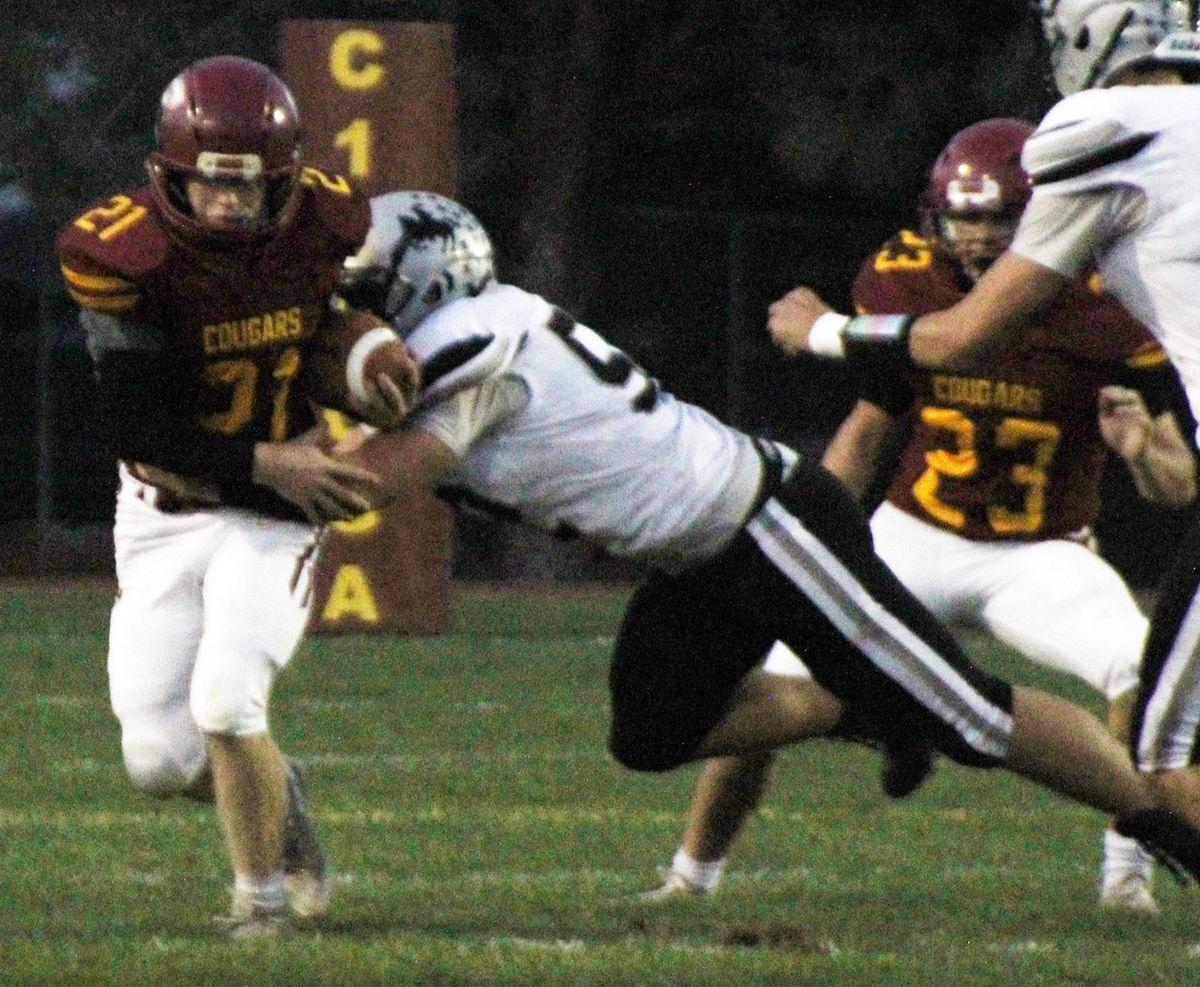 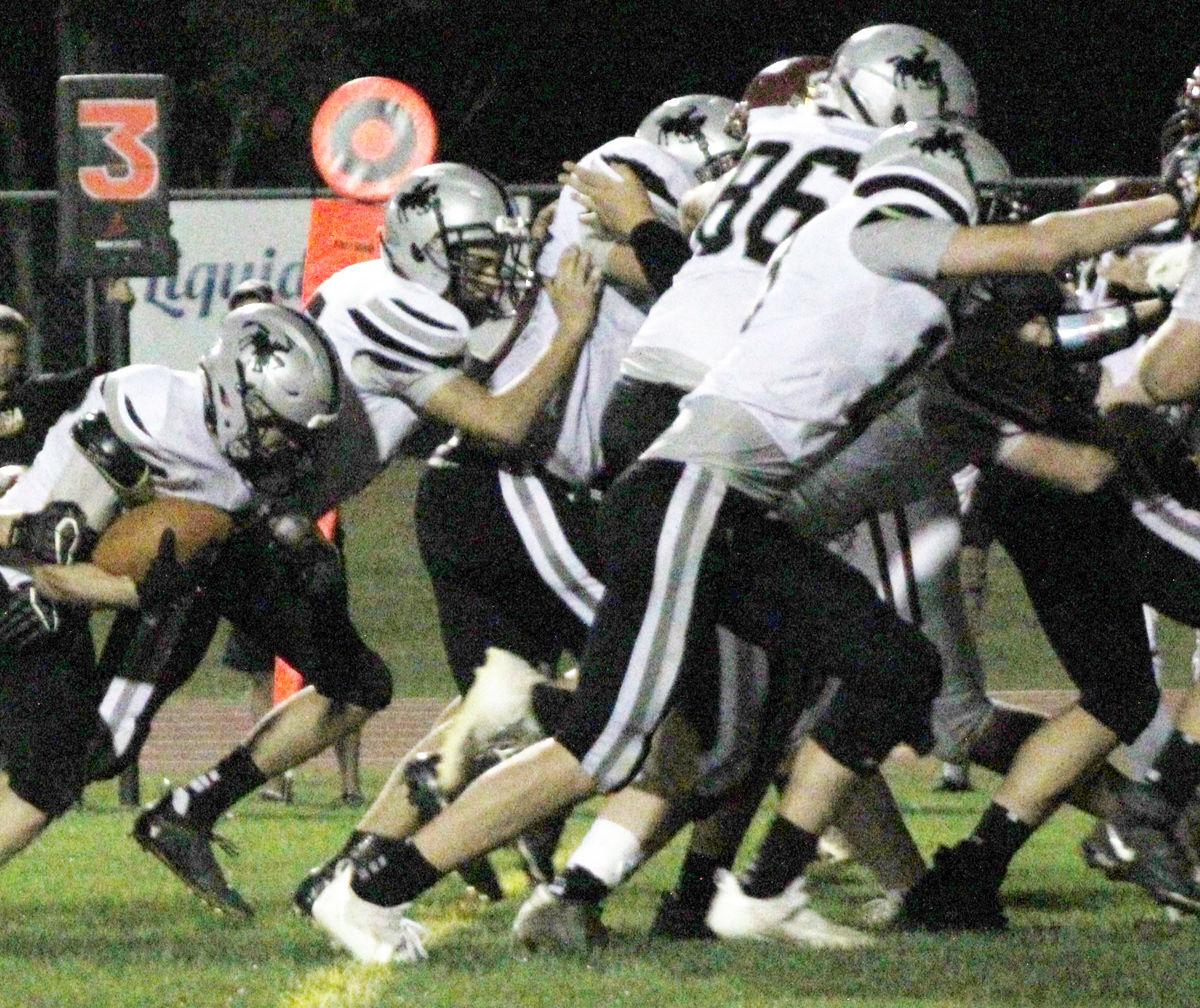 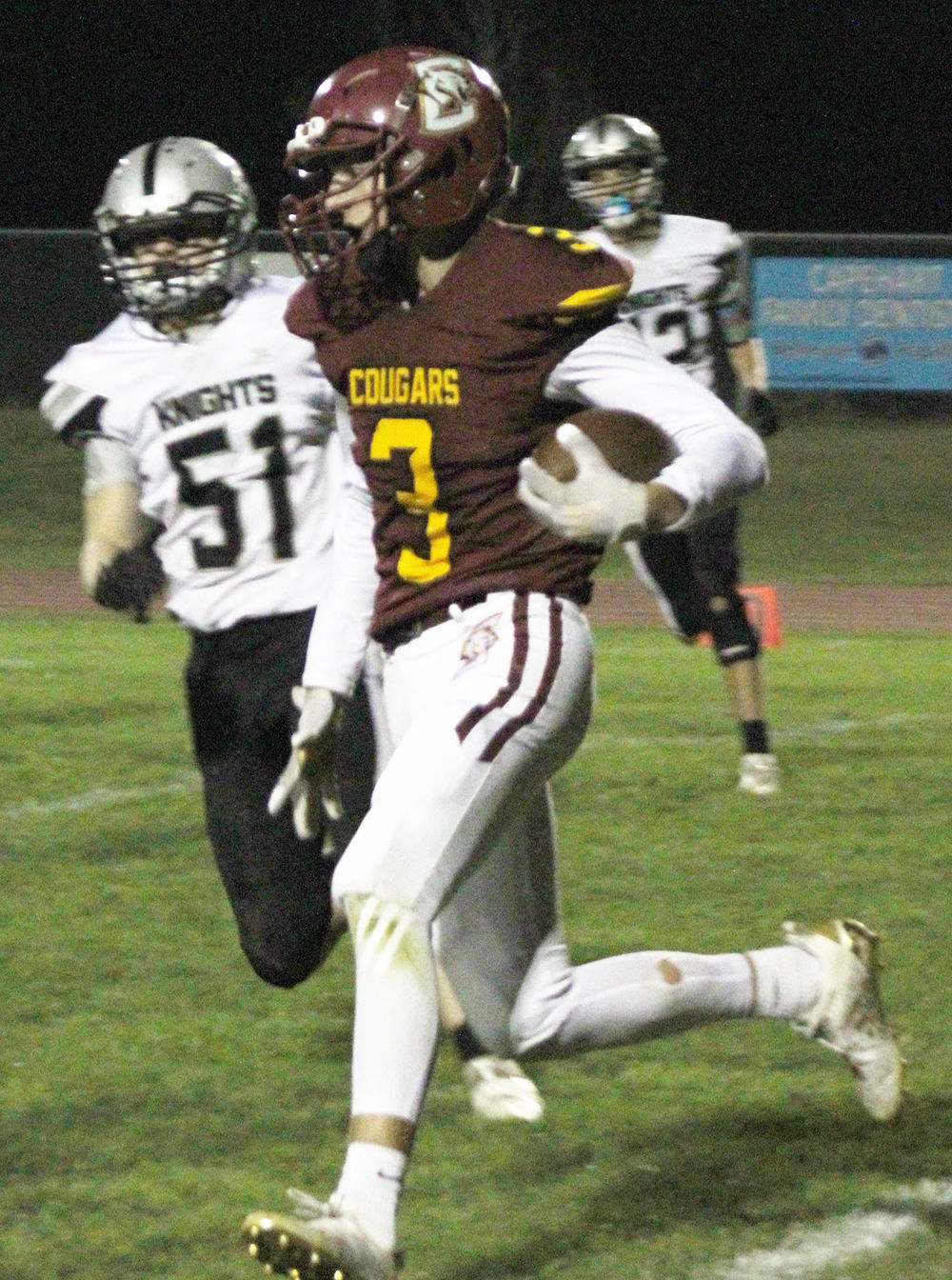 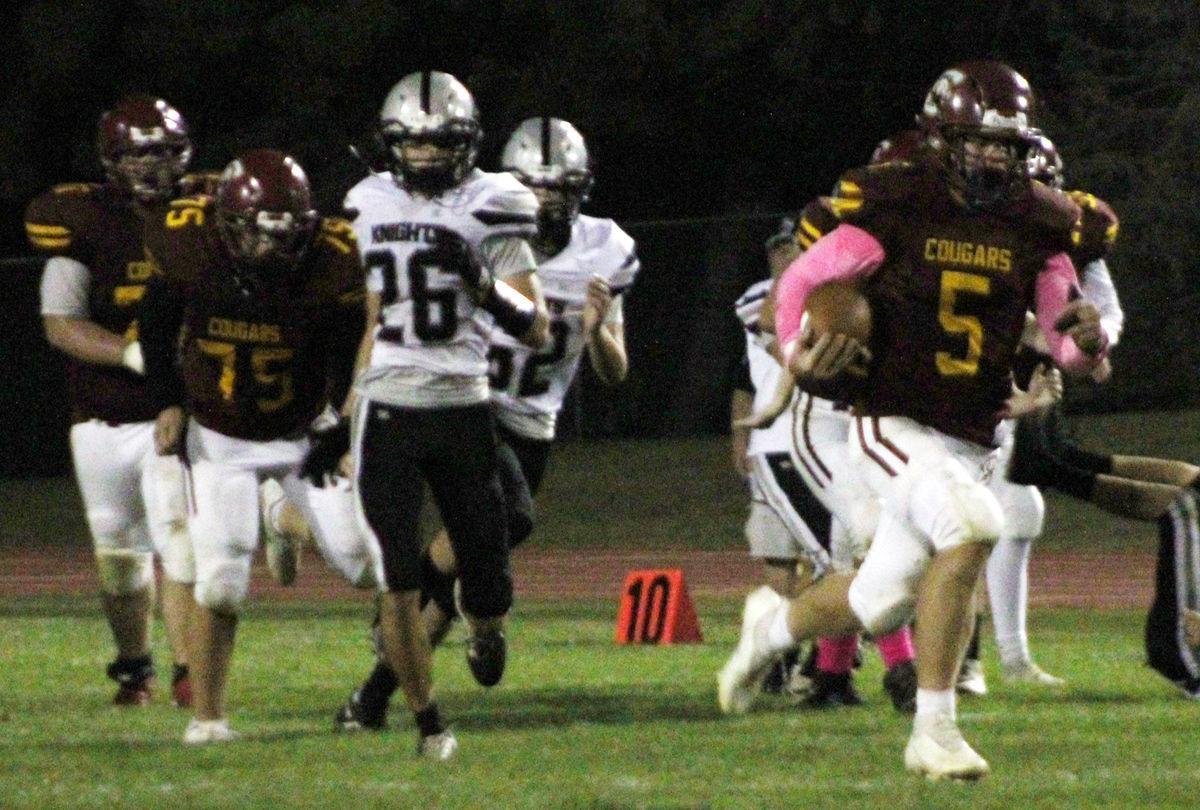 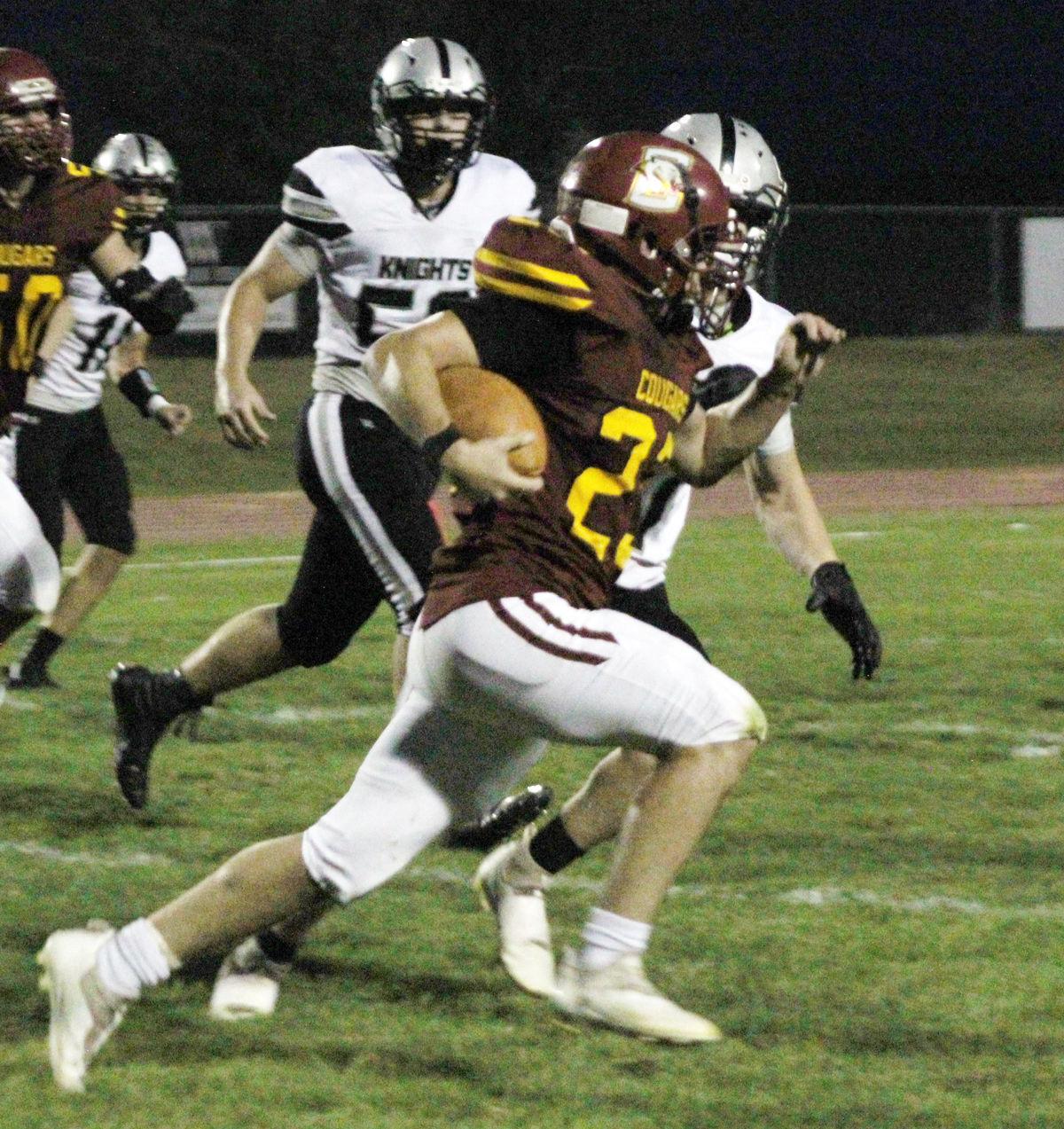 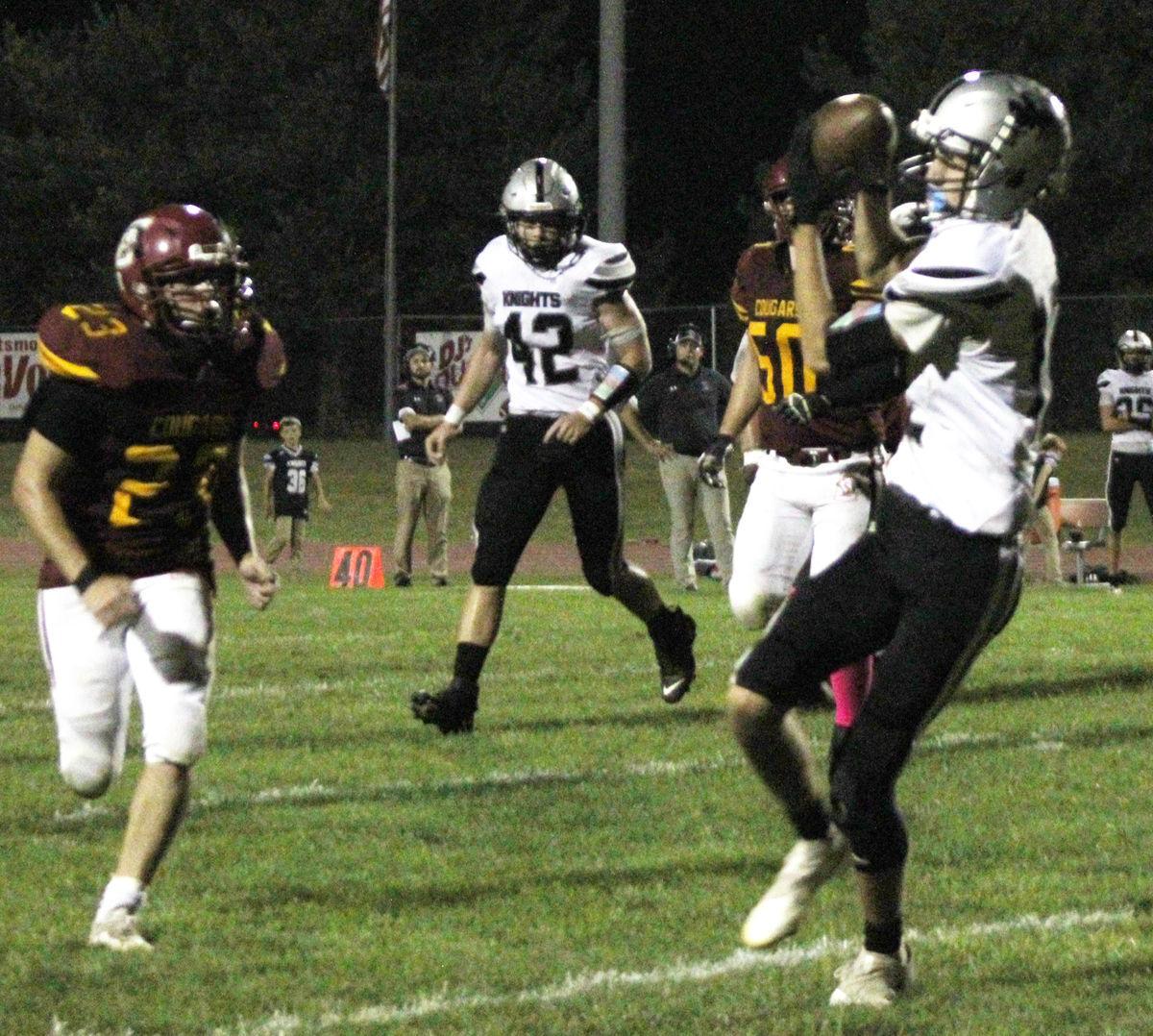 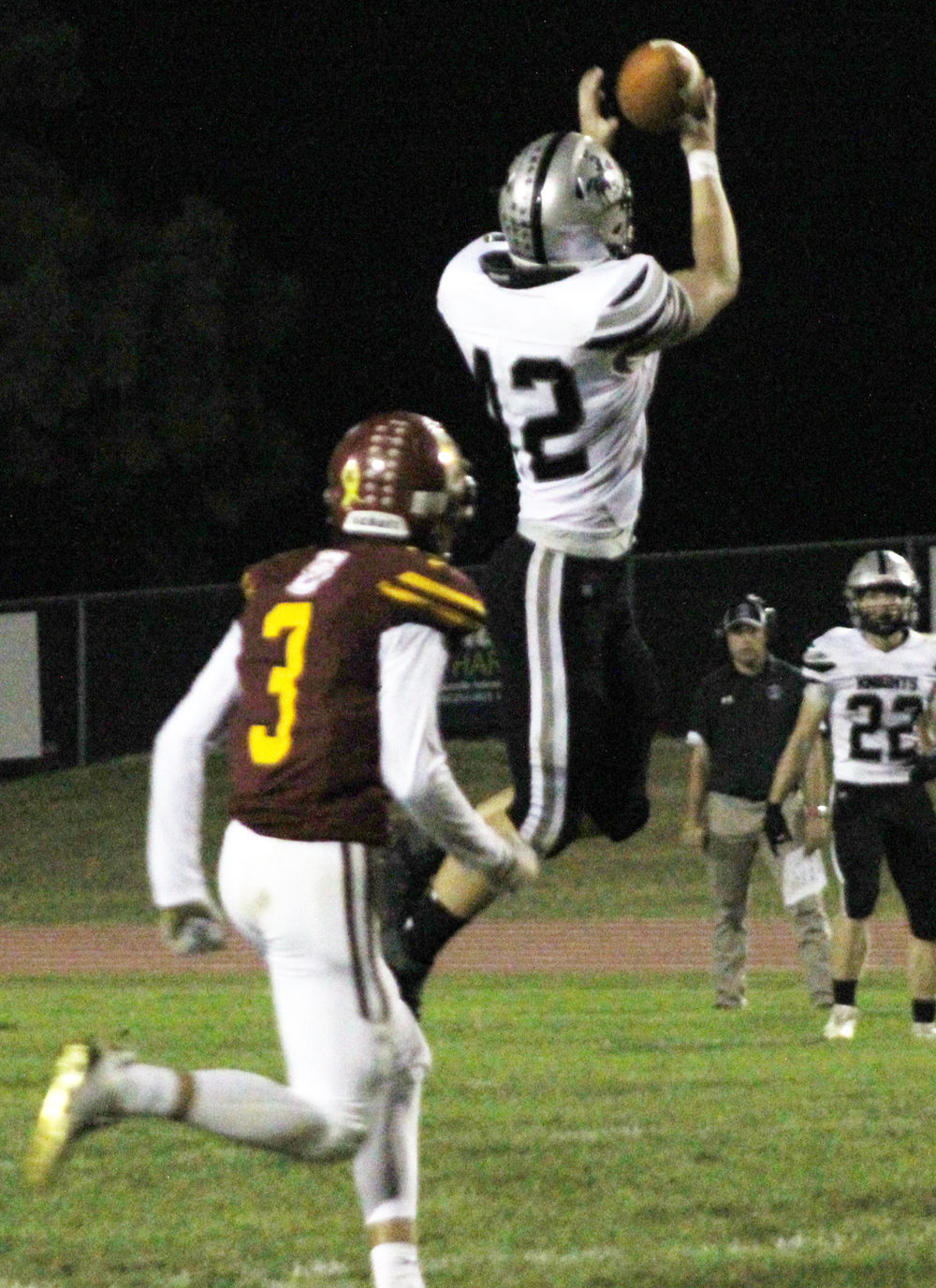 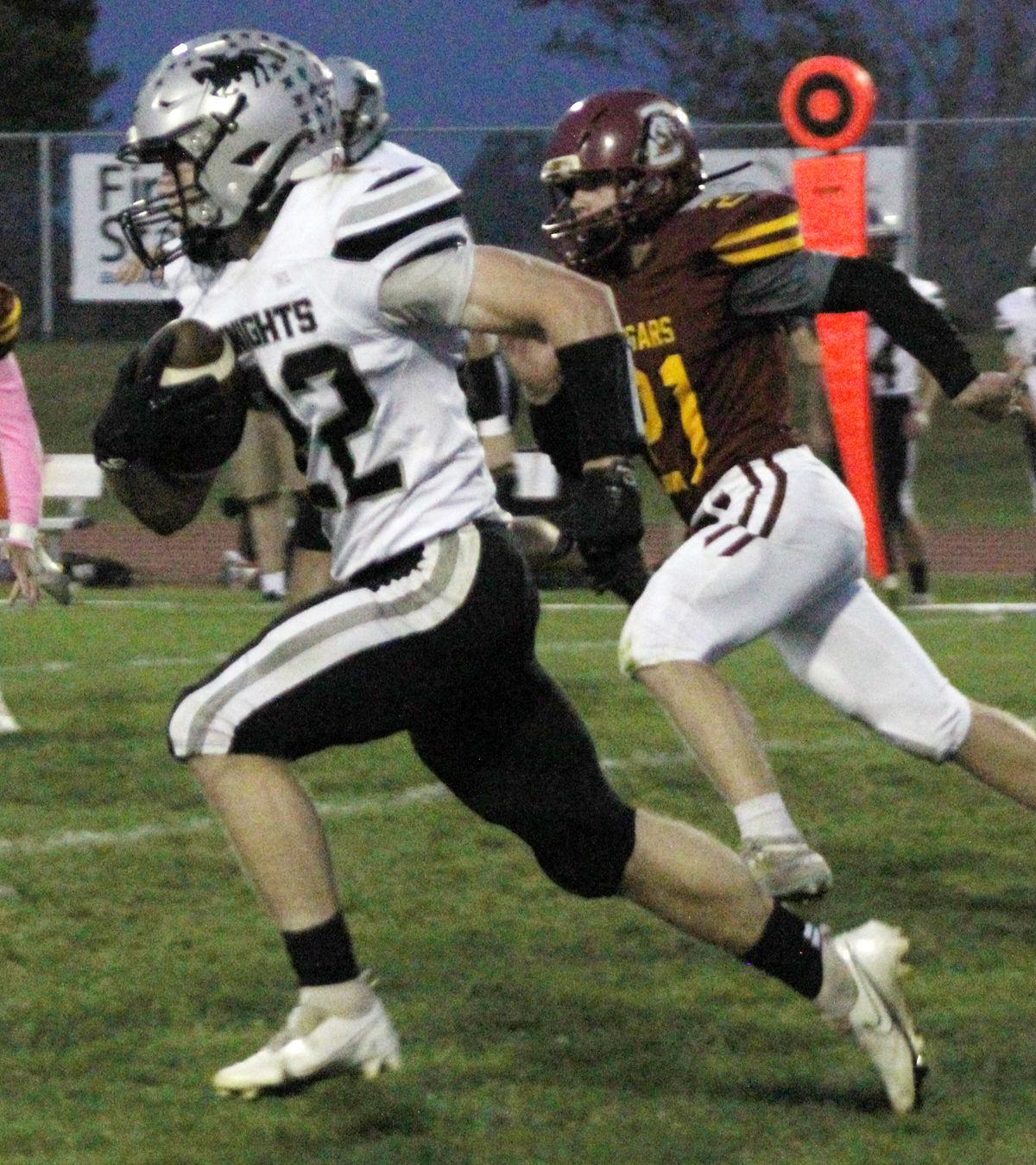 CONESTOGA – Elmwood-Murdock and Conestoga remained in the same scoring jet stream for a large portion of the first half on Friday night.

The Knights created a winning football weather report with a tornado of scoring activity just before the break.

Elmwood-Murdock found the end zone three times in the final 1:34 of the first half during a 52-8 triumph. Conestoga remained within 7-0 after one quarter and kept the margin at 15-0 until the last stretch of the second period. Elmwood-Murdock recovered a pair of kickoffs and connected on two scoring passes and one touchdown run to create a 37-0 lead.

Elmwood-Murdock head coach Lance Steffen said the Knights wanted to take charge of the contest with their powerful offense. Conestoga’s defense forced an interception and punt midway through the first half before E-M embarked on a 78-yard drive. That set the stage for the late scoring storm several minutes later.

“We found ourselves in a battle there for a little while,” Steffen said. “The boys kept going and did a really nice job in the last part of the first half. It was good to see them play well and finish our scoring opportunities.”

Conestoga head coach Trenton Clausen said he was proud of the younger Cougars for creating a competitive contest early in the evening. The team’s lineup included a number of freshmen who were on the field during the game.

“We played really well in the first quarter,” Clausen said. “We were down to eight players who were non-freshmen at one point, so we were young out there. Our defense got put in some tough situations as far as field position late in the first half, but our guys competed hard.”

Conestoga (1-6) sliced more than six minutes off the clock with a 51-yard drive to start the game. Elmwood-Murdock (4-3) took over at the 22-yard line and marched downfield for the opening score. Henry Coleman made a leaping one-handed catch at the 13-yard line, and Cade Hosier barreled up the middle on the next play to create a 7-0 lead.

Conestoga’s Breckin Berg intercepted a long pass on E-M’s next series, and a sack by Wyatt Renner forced the Knights to punt on their next possession. Renner then boomed a punt for Conestoga that rolled to the 2-yard line.

Reid Fletcher capped Elmwood-Murdock’s long drive with a 37-yard touchdown pass to Braden Mommens with 5:40 to go. The Knights extended their 15-0 lead with a short touchdown run by Hosier, and Tyson Mans recovered an onside kick to begin another scoring drive. Hosier finished a run at the 3-yard line and Rylan Kastens caught a two-point conversion pass for a 31-0 edge.

Kayden Bacon continued E-M’s momentum when he recovered the football on the ensuing kickoff. That allowed Fletcher to find Coleman on a post route in the middle of the field for a lightning-quick 18-yard touchdown.

Elmwood-Murdock scored twice in the second half. Fletcher sprinted four yards up the middle and completed a two-point pass to Jaxson Spellman in the third quarter. Riley Wilson connected with Coleman on a 19-yard touchdown play in the fourth quarter.

Conestoga got on the scoreboard with 5:48 in the game. Jayden Widler found a running lane and sprinted 65 yards into the end zone.

Cody Kopf, Bacon and Mans each recovered one fumble and Spellman made three tackles for loss. Clements, Coleman and Wynegar all posted two stops behind the line of scrimmage, and Mommens and Fletcher each made one tackle for loss.

Elmwood-Murdock will finish the regular season Thursday night with a home game against Cedar Bluffs (0-7). The Knights and Wildcats are scheduled to begin action at 7 p.m.

Conestoga will play its final game of the fall on Friday night. The Cougars will travel to Omaha Brownell-Talbot (2-5) for a 7 p.m. matchup.

“It’s going to be a new week for us,” Clausen said. “We’re looking forward to the opportunity to take the field again.”

BELLEVUE – Plattsmouth runners penciled a trip to Kearney Country Club on their team calendars with state-qualifying efforts on Thursday morning.

WEEPING WATER – Weeping Water set up a permanent address in the end zone Friday night with a scoring showcase against Omaha Brownell-Talbot.

FORT CALHOUN – Cass County athletes showcased their running talents with many of their top times of the season at Thursday’s district meet.

All five Cass County volleyball teams will compete in conference tournaments this week across eastern Nebraska.

PLATTEVIEW – Louisville athletes booked plenty of trips into the end zone Friday night in their football game against Platteview.

PLATTSMOUTH – Plattsmouth athletes gave home fans a pair of action-filled matches this week during their time on the volleyball court.

Elmwood-Murdock flies past Freeman in tournament