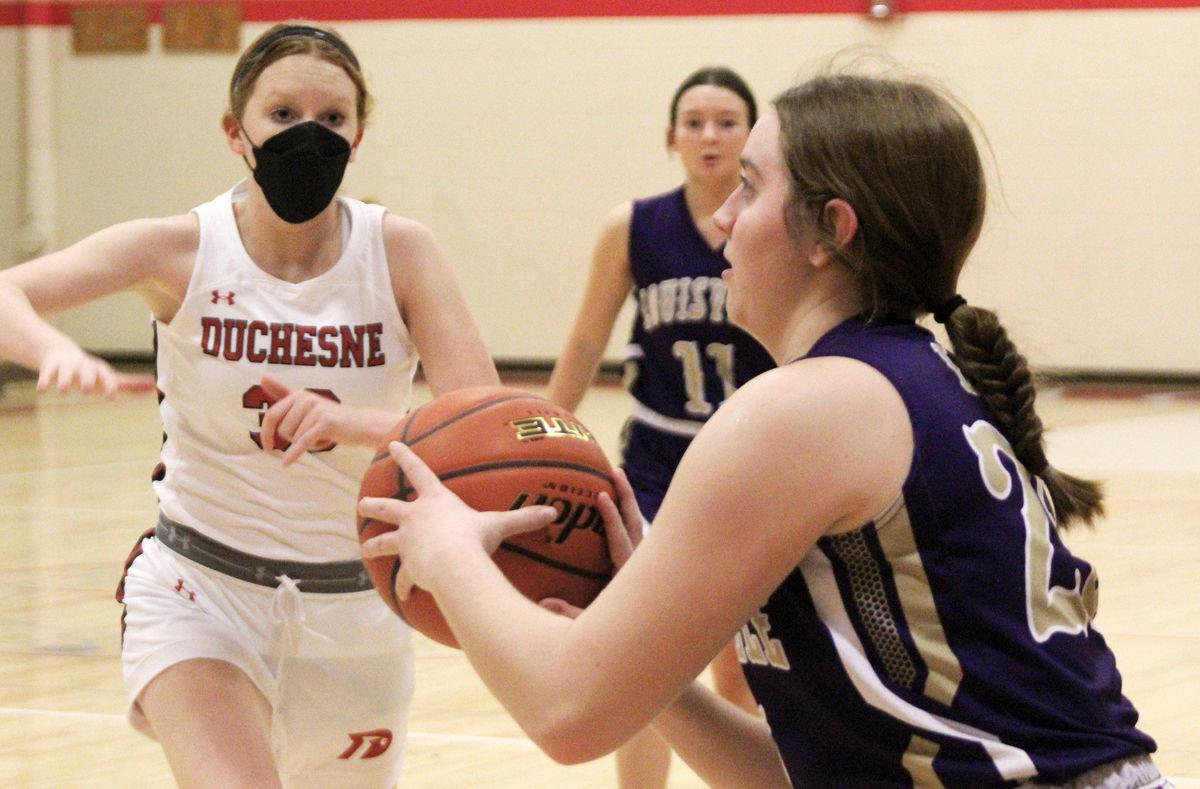 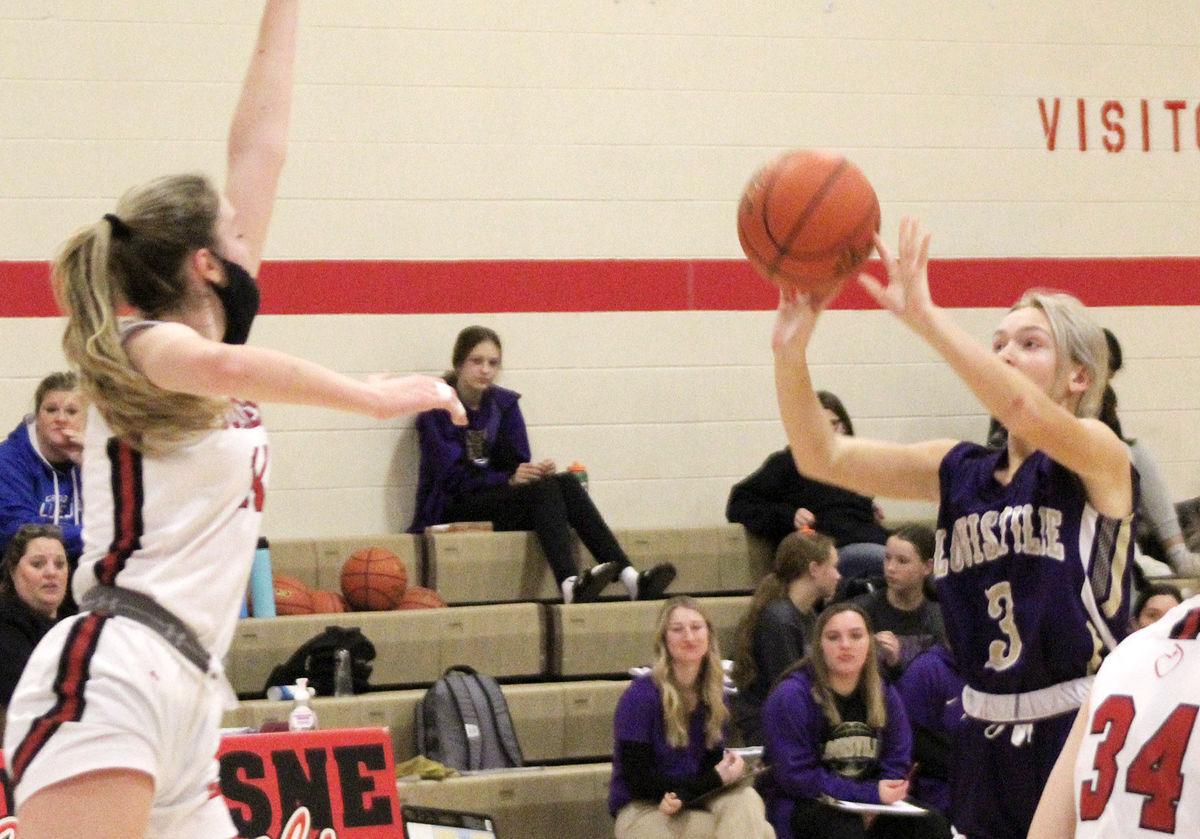 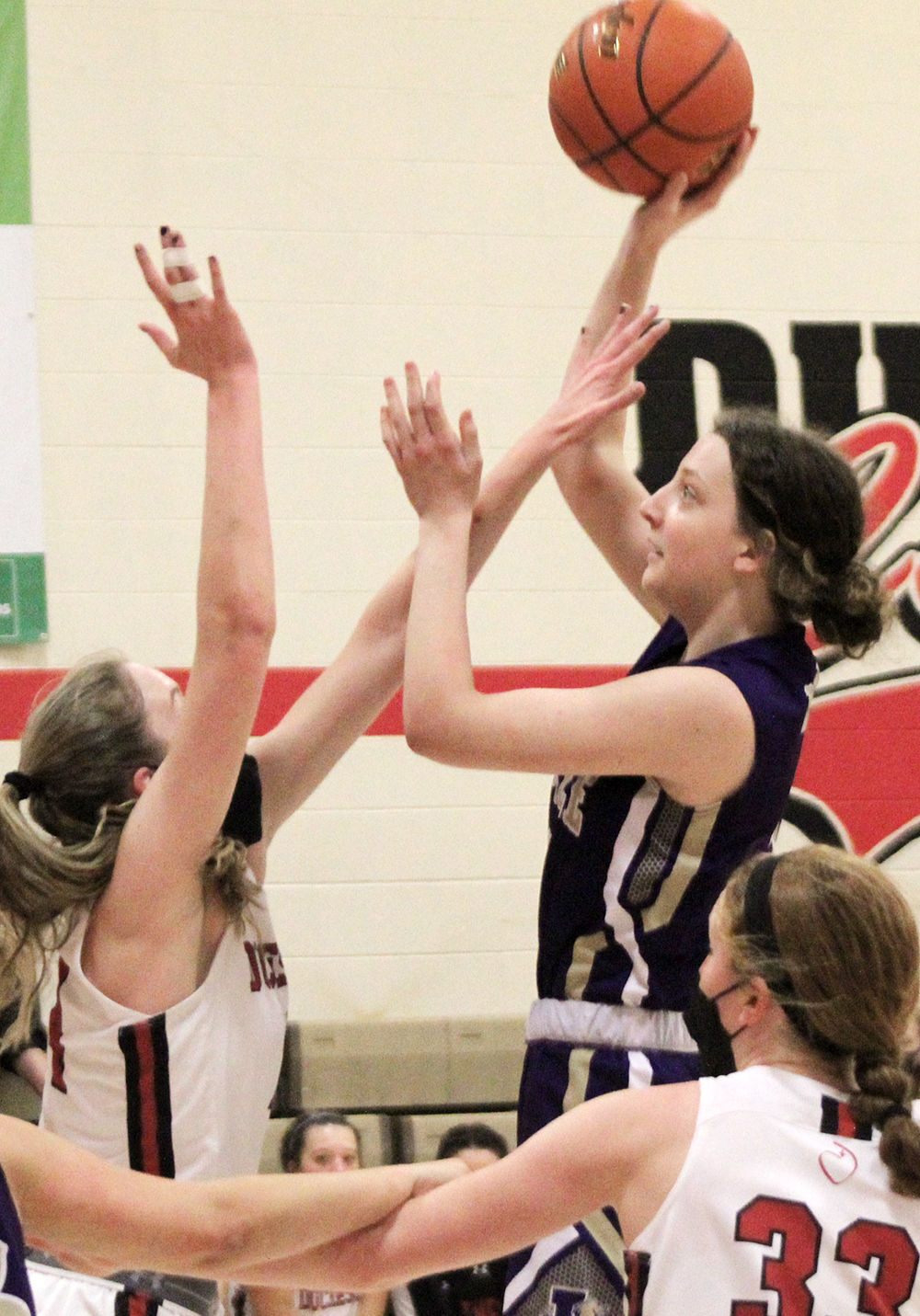 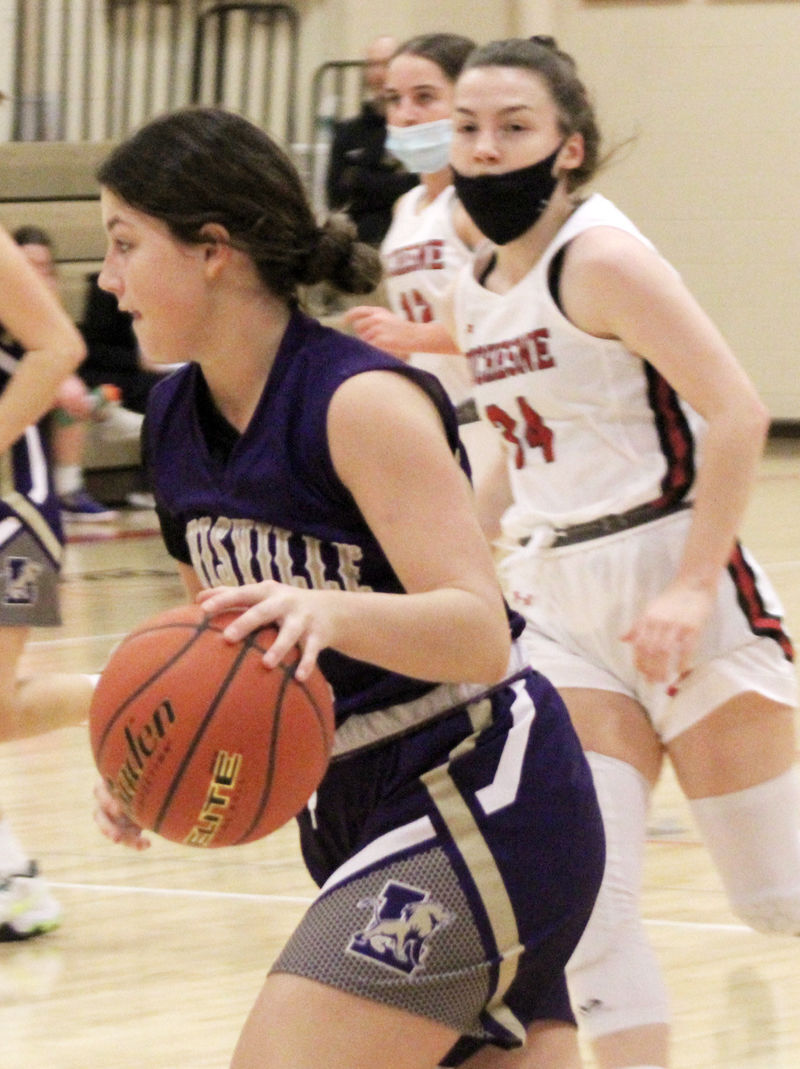 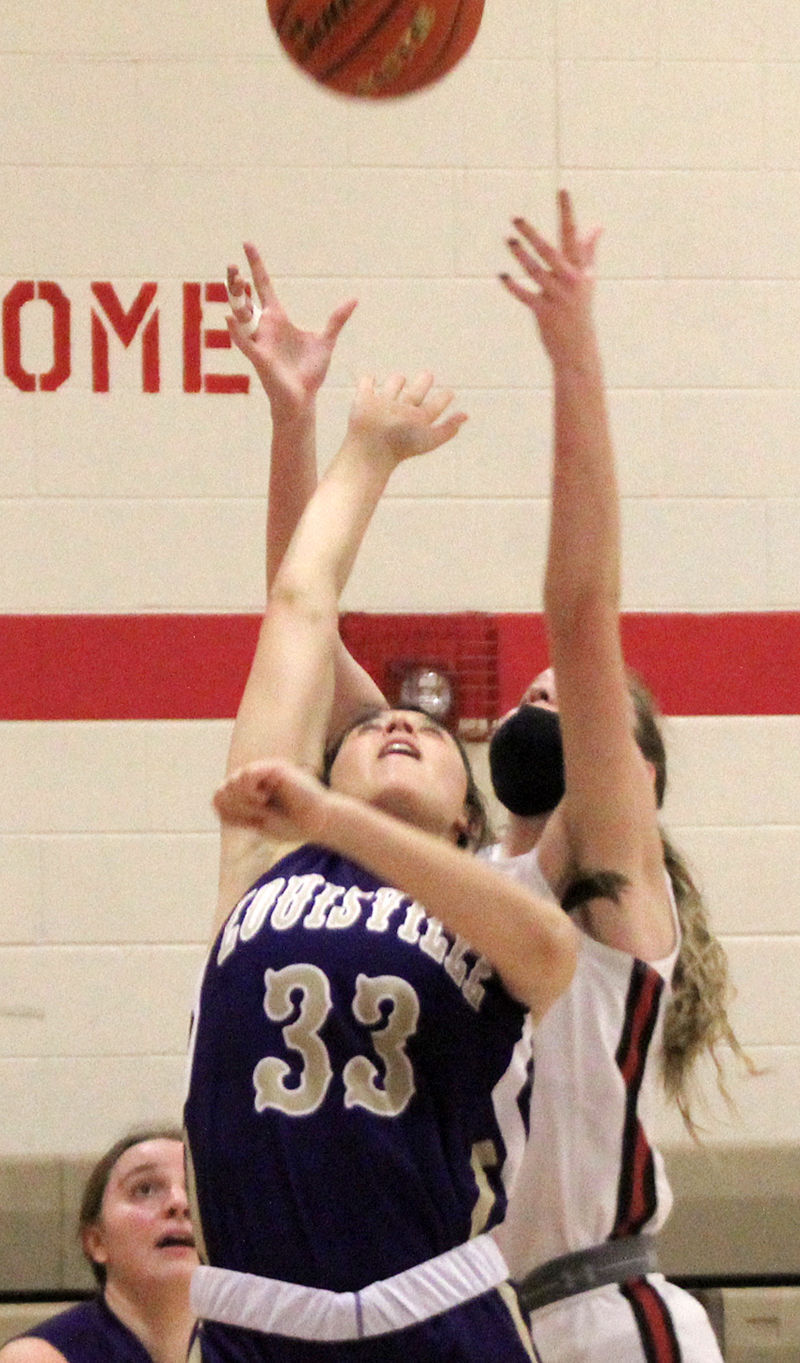 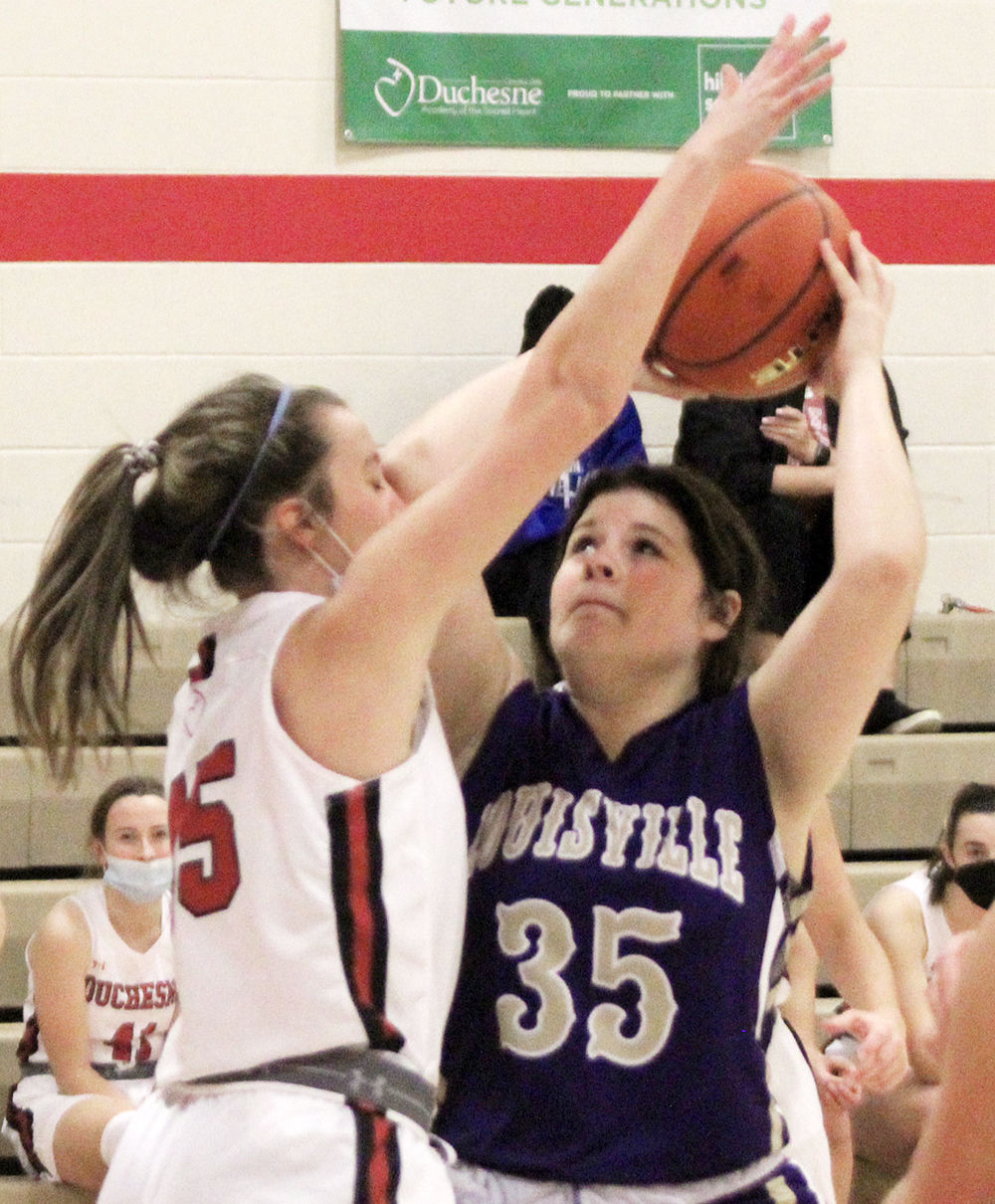 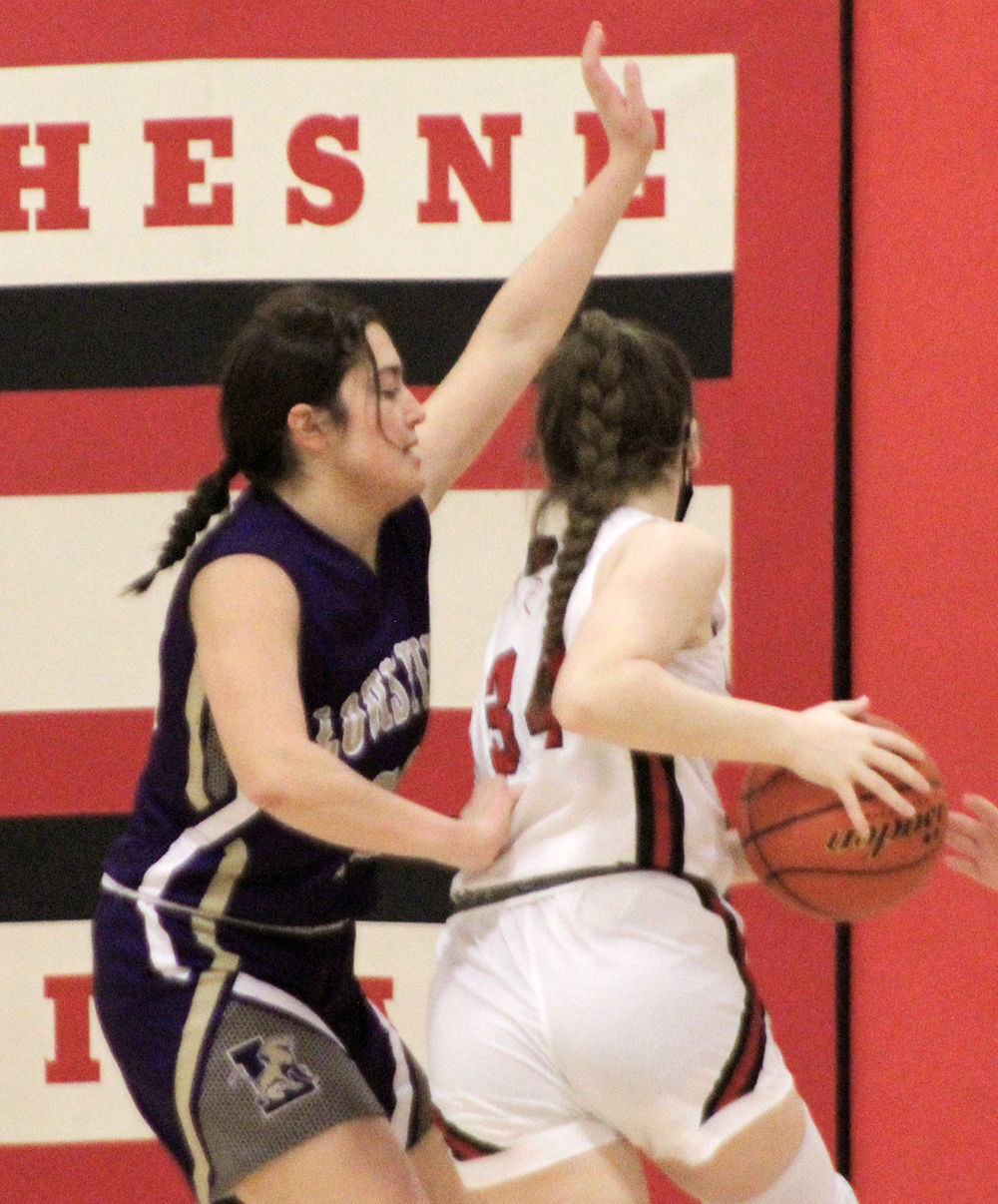 OMAHA – The Louisville girls nearly completed a giant comeback on the court against Omaha Duchesne on Saturday afternoon.

Omaha Duchesne held off Louisville’s furious rally attempt to win 52-47. The Lions trailed by 13 points early in the fourth quarter but trimmed the deficit to 46-42 with 1:05 remaining. The Cardinals went 6-of-8 from the free-throw line in the final 48 seconds to remain in front.

Louisville head coach Wally Johnson said the Lions had hoped to continue their momentum from the previous night’s game against Syracuse. Louisville stayed with the Rockets (8-3) before falling 39-27. The team came close to recapturing that energy in the final stretch against Omaha Duchesne.

“We had a flat first half, and it looked like we had something to play for in the second half,” Johnson said. “The girls played a great game last night, so I was disappointed to see how we started off today. They came out and did a nice job in the second half and made a game of it, which was good to see. That’s something we can build on for next week’s games.”

Saturday’s contest was the first one for Louisville without leading scorer Avery Heilig, who suffered an injury the previous night against Syracuse. Heilig watched from the Louisville bench with several other injured teammates.

Louisville (5-7) continued its success on offense from the past two weeks. The team reached 47 or more points for the third time since Dec. 29. LHS had been in the 30s six times at the beginning of the season.

“We scored a lot of points today,” Johnson said. “Coming in here we were averaging in the 30s, so the girls did a good job of shooting the ball. Today it was a matter of not making enough defensive plays. We needed to have a few more stops against them.”

Omaha Duchesne (4-6) found success on offense during the first half. Caroline Shanahan, Nicky Huss and Kyra Bekaert scored on consecutive trips in the opening four minutes, and Ella Wright’s 3-pointer with ten seconds to go in the first period made it 14-10.

Louisville cut the gap to 22-17 before the Cardinals surged ahead in the final 1:43 of the half. Shanahan capitalized on a steal with two free throws and Gianna Manhart scored on a drive to make it 26-17. Shanahan’s short jumper created a 28-17 halftime margin.

Ella Aaberg helped the Lions remain in contention in the second half. She came off the bench to score 11 points after the break. Her 3-pointer late in the third quarter kept the deficit at 39-31, and her offensive rebound, putback and free throw with 4:44 left made it 45-38.

A putback by Ella Johnson sliced the gap to five points, and two free throws from Brooke Smith made it 46-42 with 65 seconds to go. Bleske drained four free throws in a 27-second span to create a 50-44 game, and Shanahan drew a charge on the sidelines as Louisville was trying to race ahead for a 3-point attempt. She sealed the outcome with two free throws.

Ella Culver delivered two rebounds, one steal and one pass deflection for the Lions. Abby Bruce chipped in two rebounds in the paint.

Hardy to compete for Midland track and field program