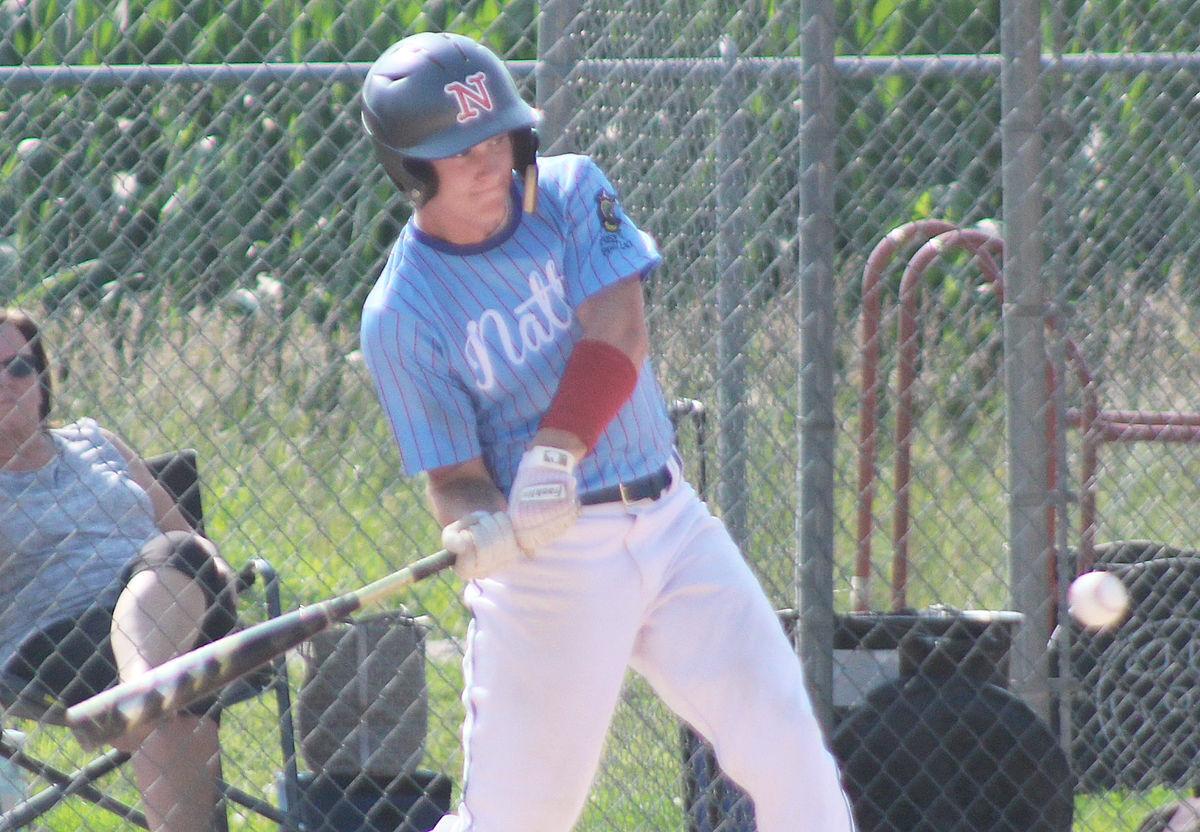 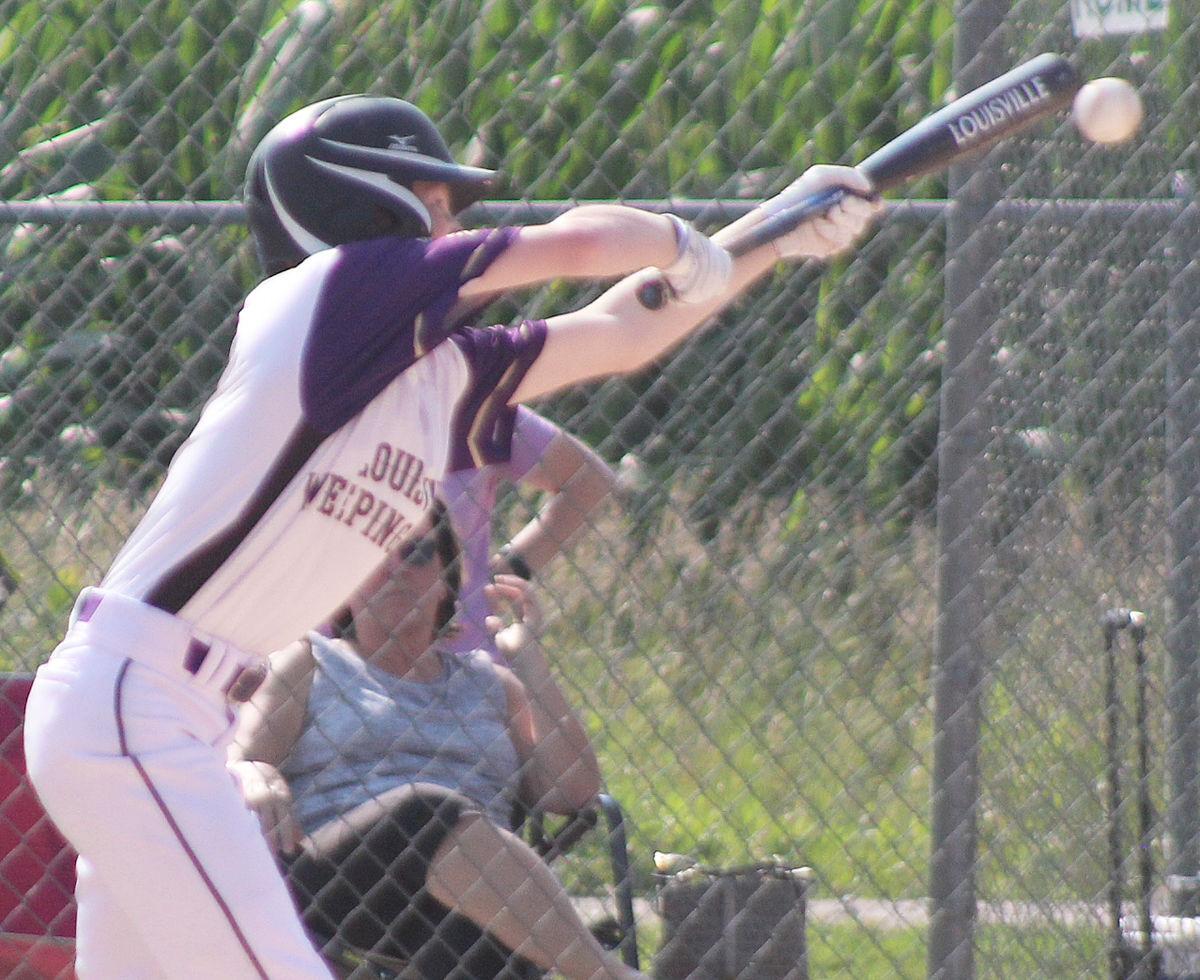 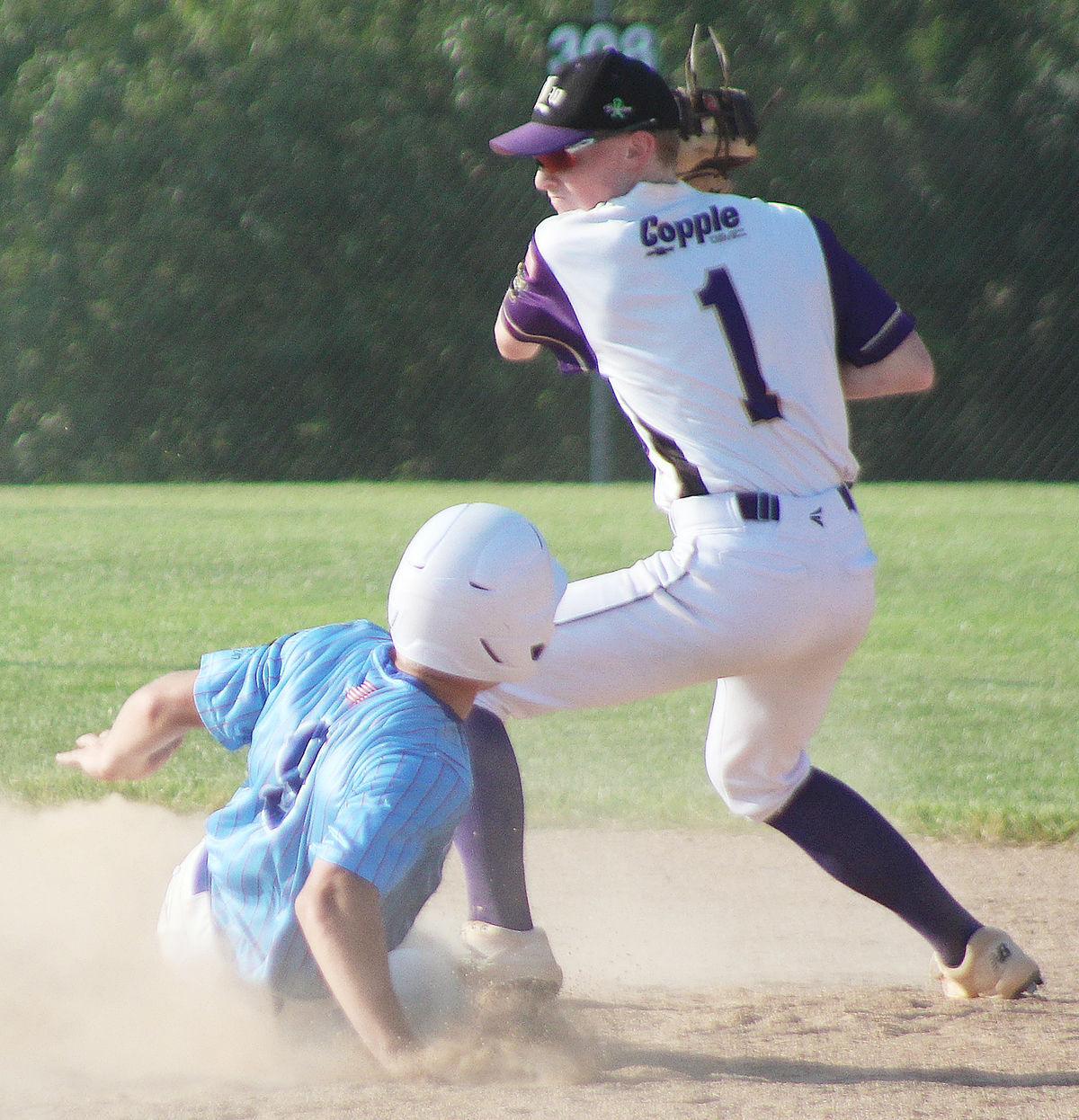 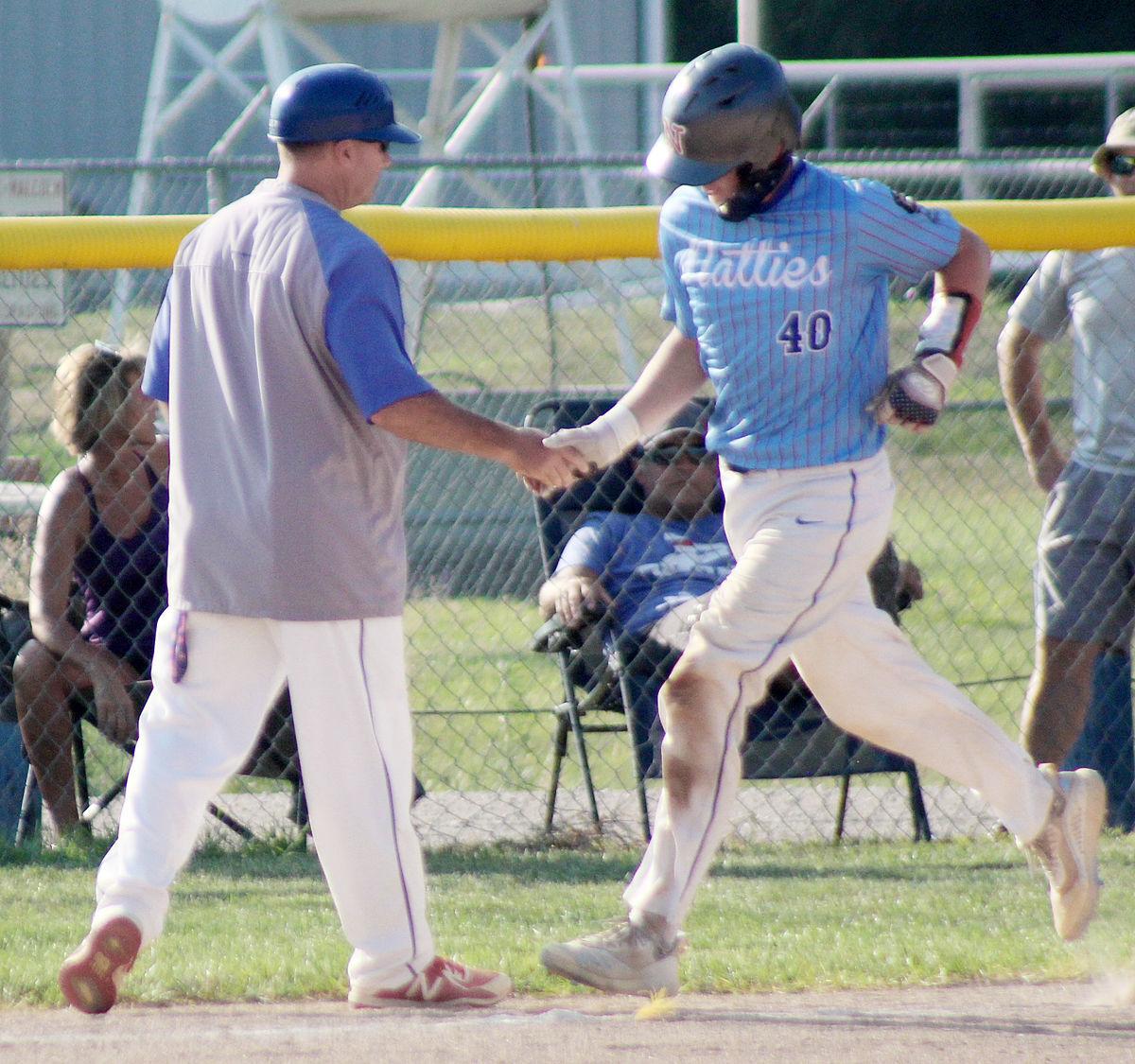 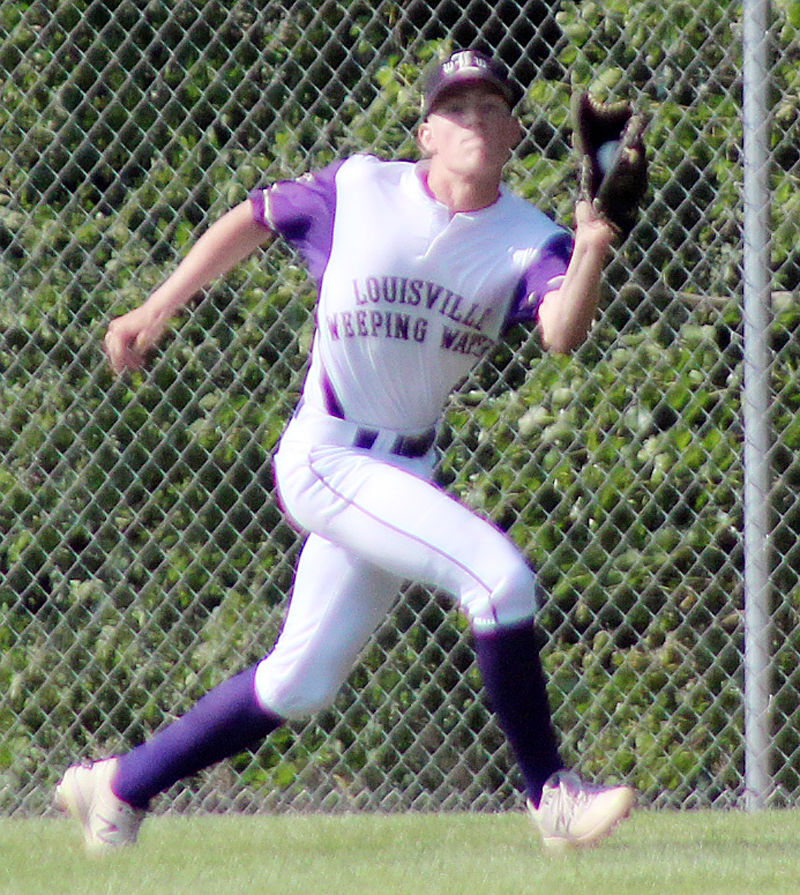 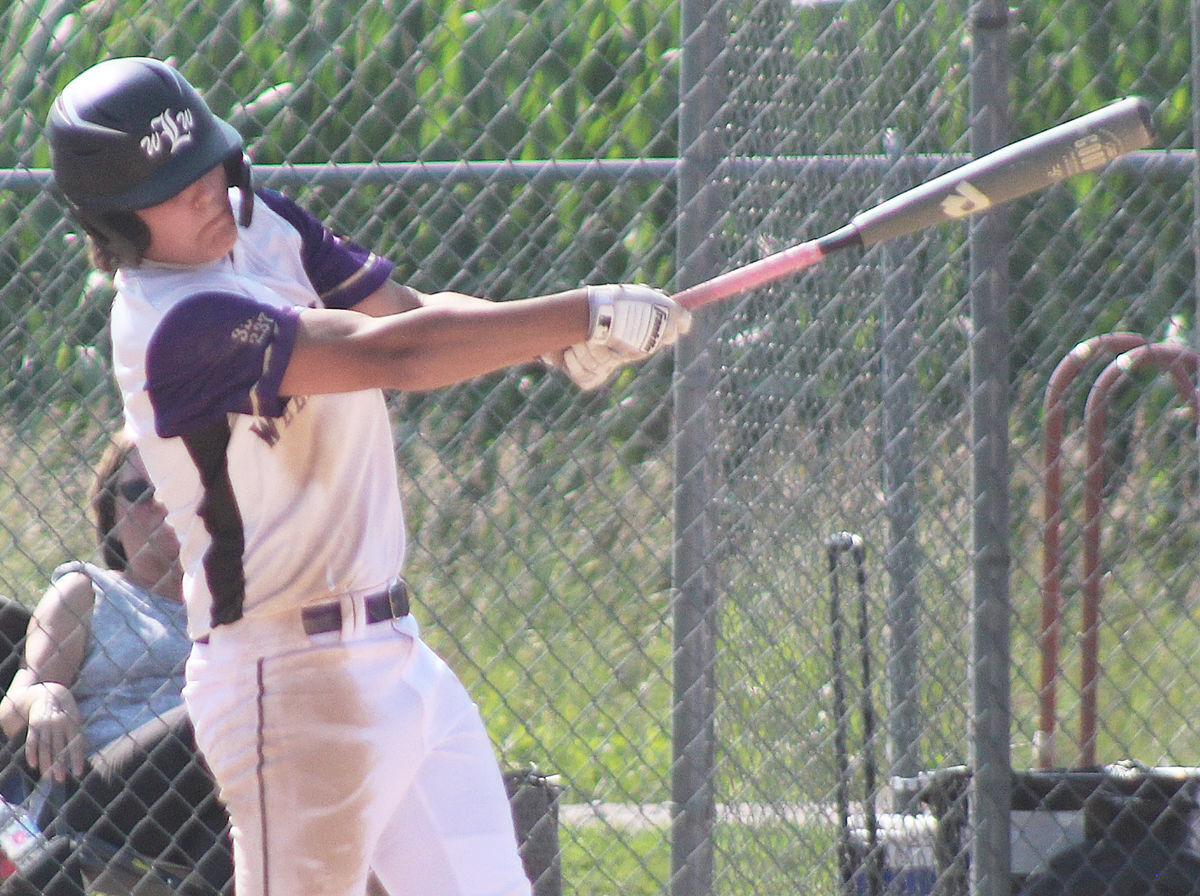 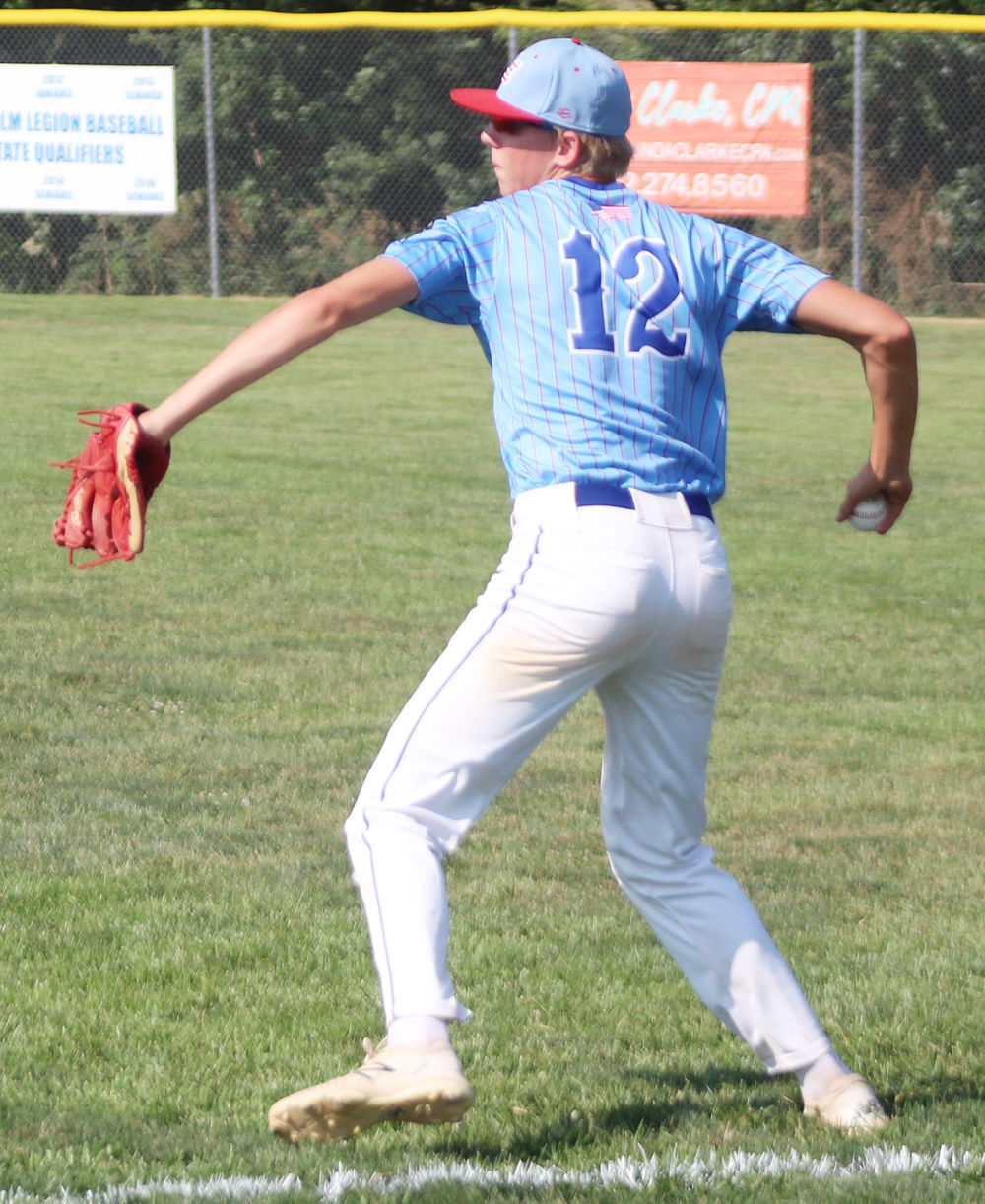 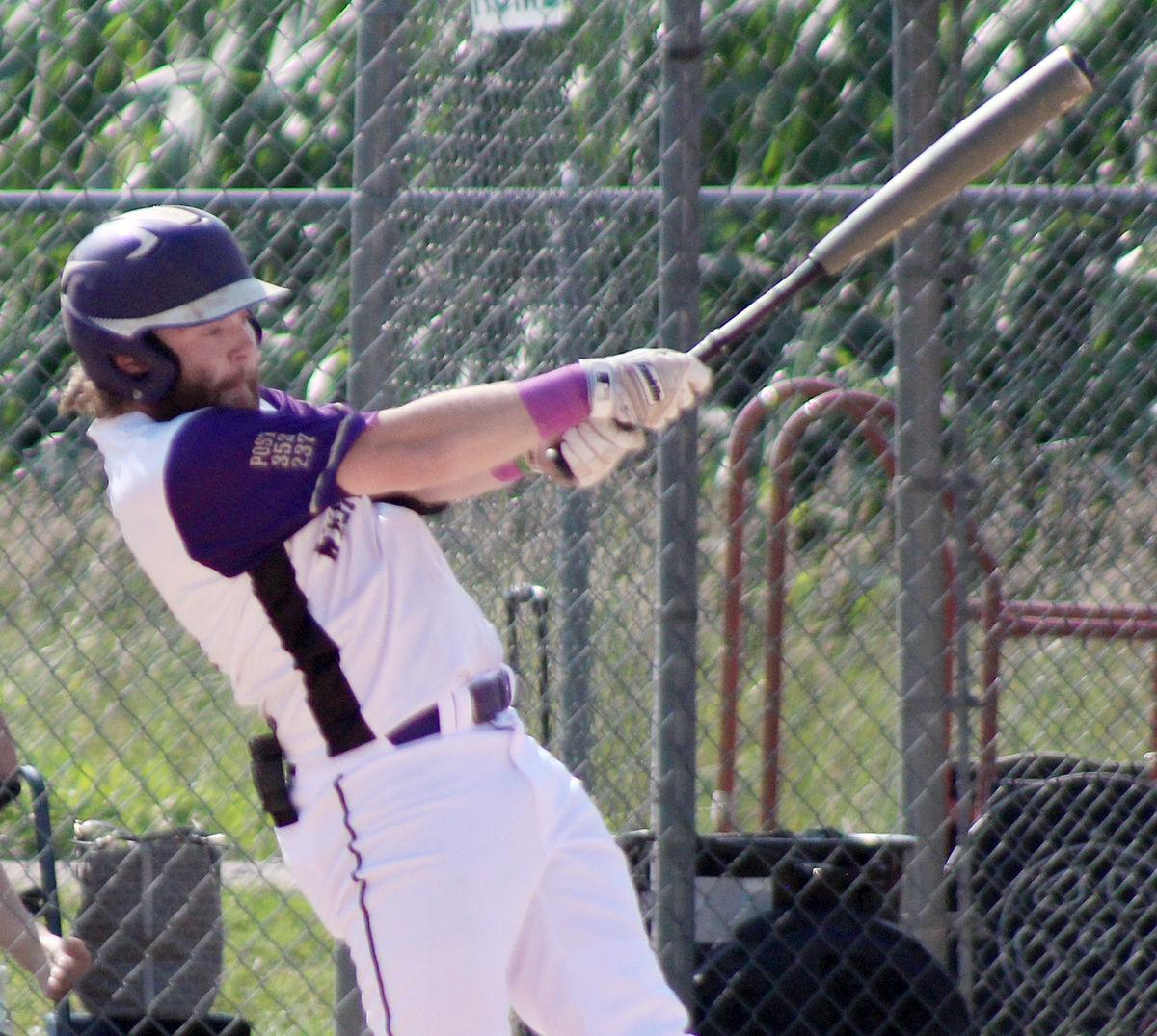 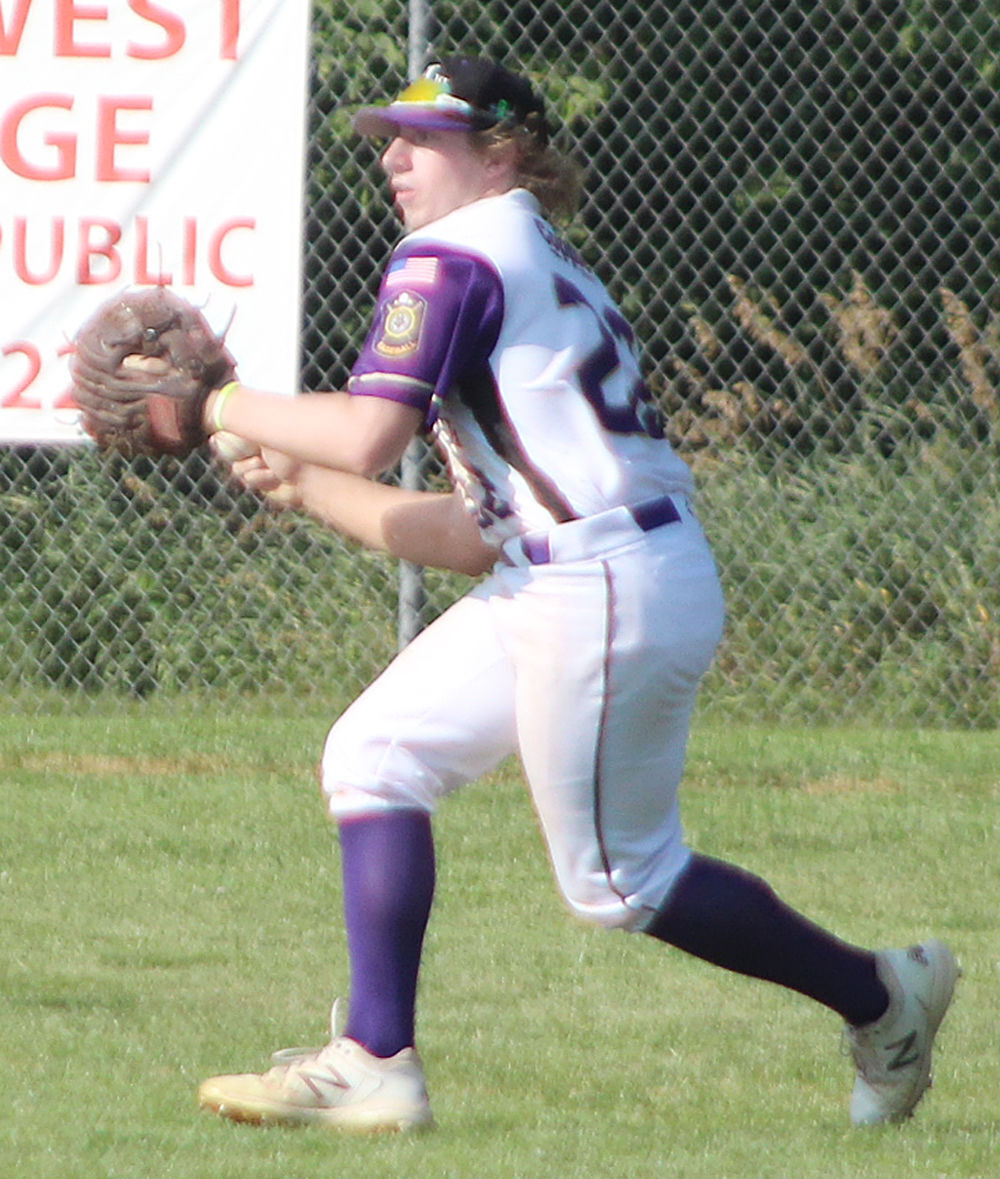 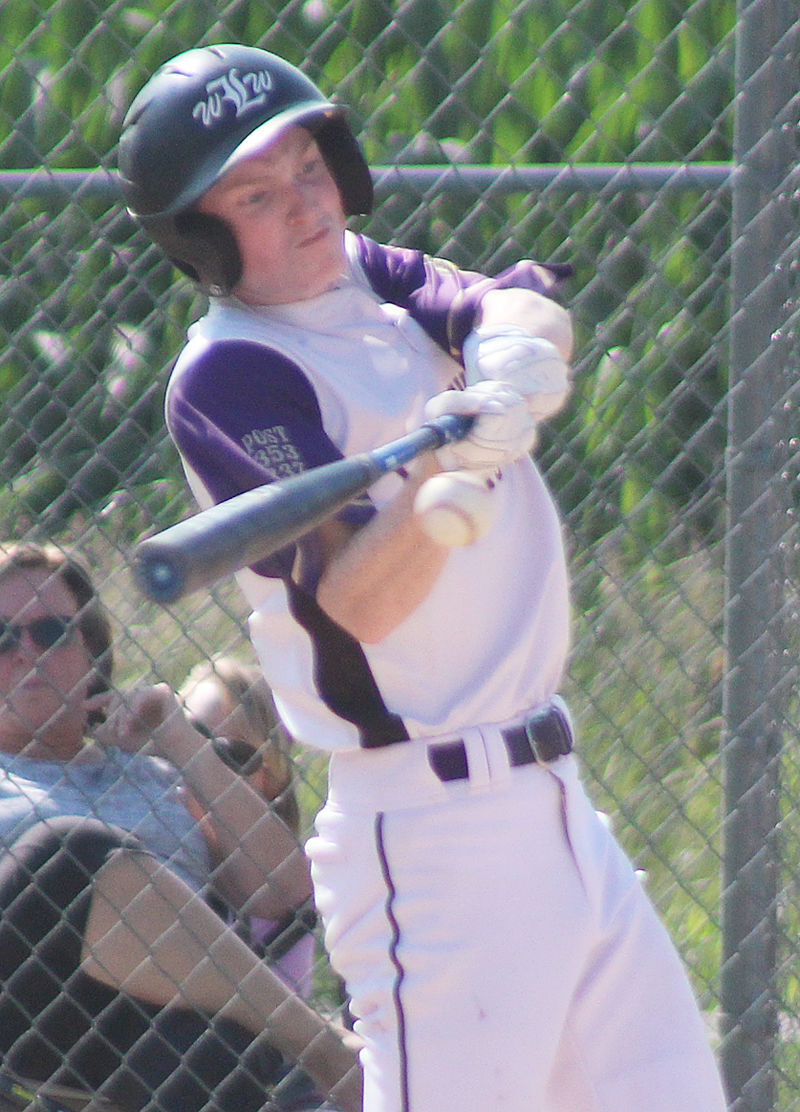 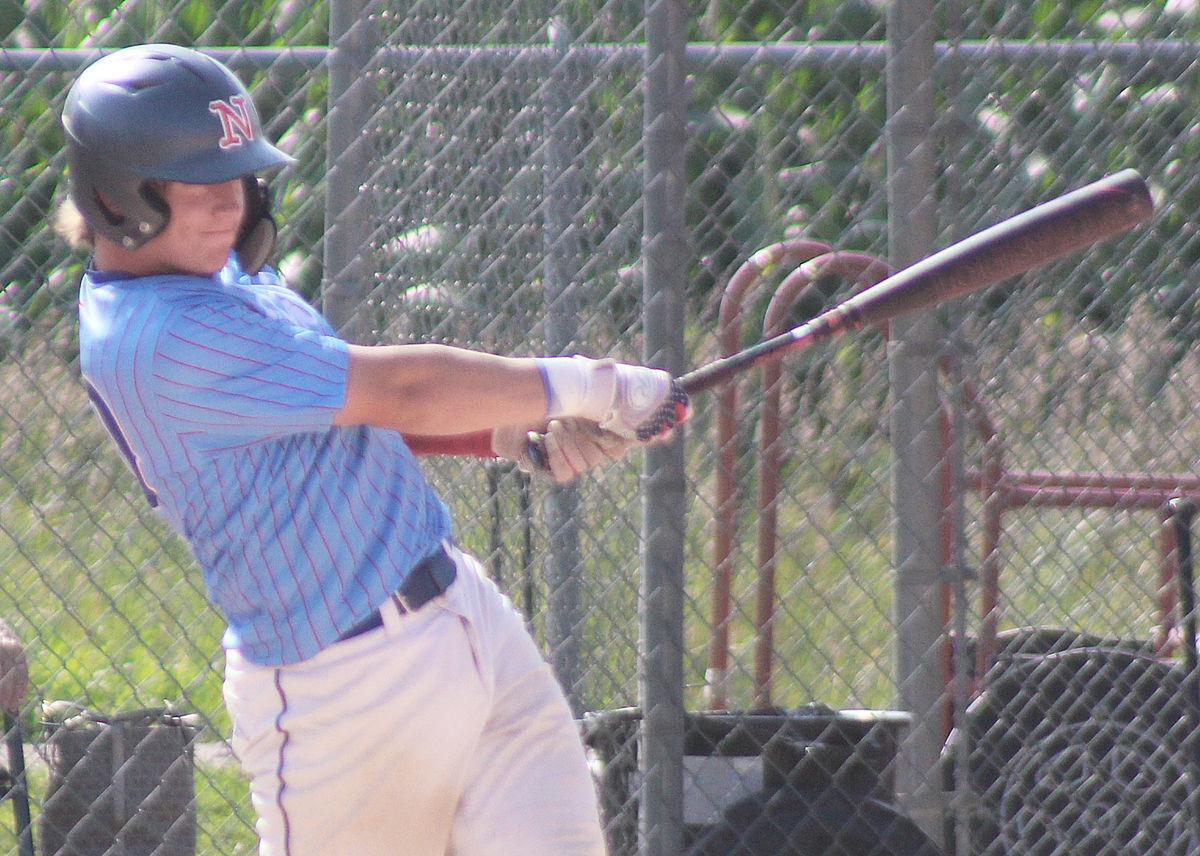 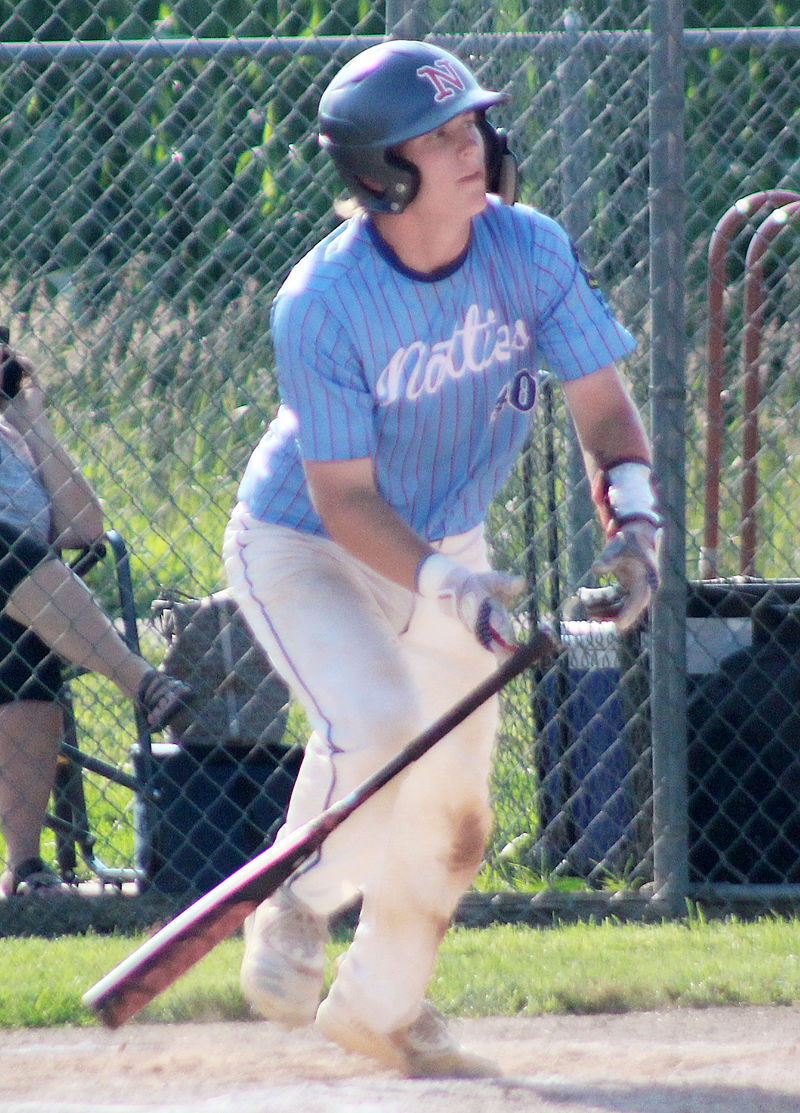 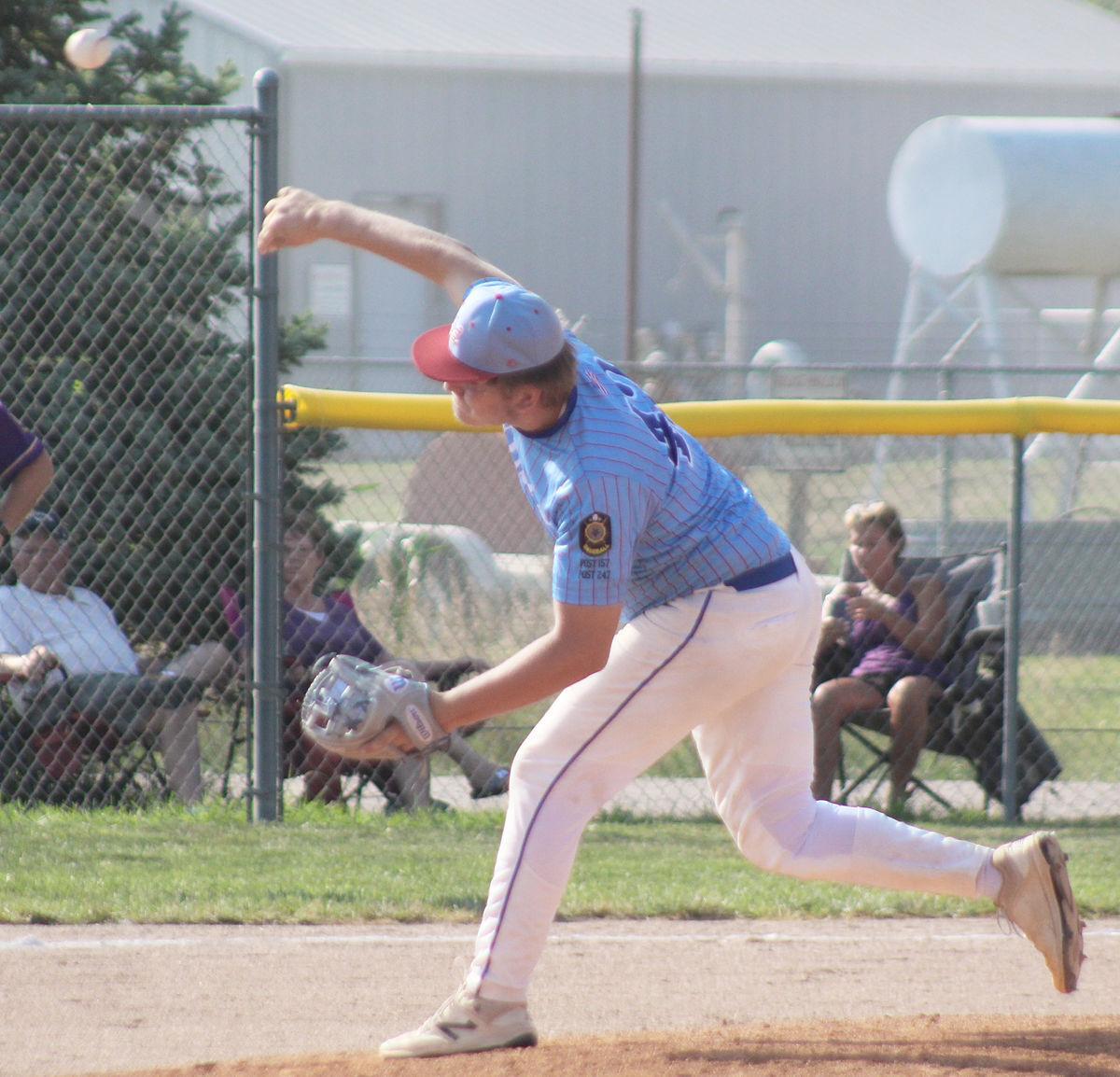 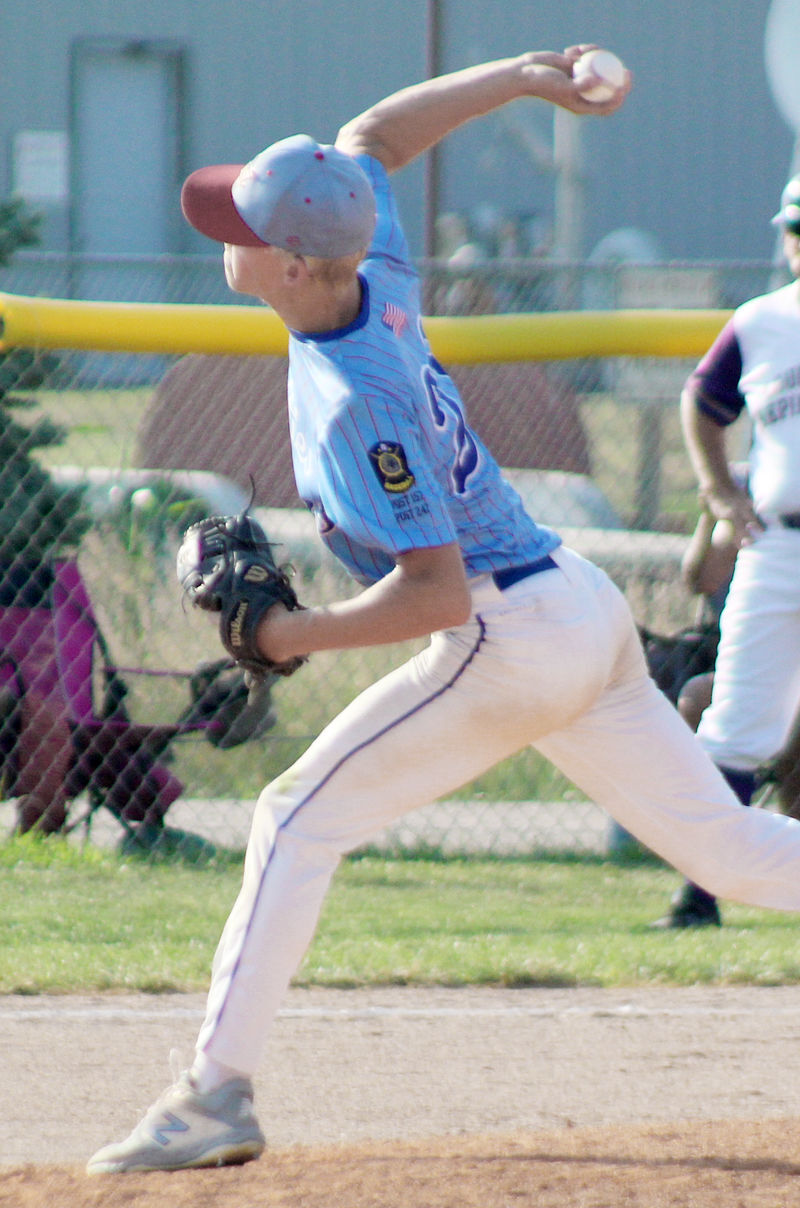 MALCOLM – Elmwood-Murdock/Nehawka banked a district victory over Louisville/Weeping Water by depositing a steady stream of digits on the scoreboard.

The Nationals posted runs in every inning of their 9-1 victory in the Area C3 Senior Legion Tournament. The Cass County teams played their postseason game late Friday afternoon at Malcolm Ballfield.

E-M/N head coach Dave Lutz said he was pleased with the way the fourth-seeded Nationals played against the fifth-seeded Lions. E-M/N produced ten hits and put the baseball in play in nearly every at-bat. The team’s pitching and defense limited the Lions to just one run and six hits during the six-inning contest.

“That was as complete of a game as we’ve played in a while,” Lutz said. “Louisville/Weeping Water’s a good program with a lot of history, and we knew they were going to come at us with everything they had. We got into a really good groove on offense and just kept scoring runs little by little. I’m happy with what I saw out there from the guys.”

E-M/N fans cheered first on a day that featured temperatures in the 90s. Austin Boucher led off the game with a ground-rule double over the center-field fence. Courtesy runner Cade Hosier then scored on Jakob Boucher’s two-out RBI single to center.

The Nationals swung the game’s energy in their favor even more in the second. Louisville/Weeping Water loaded the bases with no outs after a single by Gage Scholting, walk to Nash Callahan and bunt single by Chase Savage. E-M/N starting pitcher Kobe Gansemer began working out of the jam with a popup and strikeout against the next two batters.

Gwyer Leach then knocked a baseball that found its way down the rightfield line. The Lions scored one run on the play, but E-M/N second baseman Ty Fox prevented additional damage. He raced over to grab the baseball and fired a rocket to home plate to catch a runner for the third out.

“To get out of that with just one run was pretty big,” Lutz said. “Ty made a heck of a play to get that ball and then throw their guy out at the plate. That inning could have turned into something where they scored three or four runs, and that would have changed the whole game. That was a big momentum shift for us.”

The Nationals broke the 1-1 tie in the bottom of the second. Cameron Spiegel reached second base on an error and moved to third on Jaxson Spellman’s groundout. He then scored on a balk. Ty Fox reached base on a fielder’s choice and later scored on Austin Boucher’s RBI single to center.

The team swelled the gap to 6-1 in the next frame. Jakob Boucher and Jayden Widler reached base on an error and single, and Spellman drove in Boucher with a shot to center field. Widler raced home on a bunt single by Ty Fox, and Spellman crossed the plate on Tucker Oehlerking’s RBI groundout.

E-M/N scored solo runs in the fourth, fifth and sixth innings. Lane Fox doubled and scored on Jakob Boucher’s RBI sacrifice fly in the fourth, and Austin Boucher crushed a solo home run to straightaway center in the fifth. Widler knocked a double in the sixth and scored on Will Bauder’s walk-off RBI single.

“It was nice to see the guys hit the ball well today,” Lutz said. “It’s important to put the ball in play, because anything can happen when you do that. They just kept making contact and getting hits, and we were able to keep adding runs on the board because of that.”

Austin Boucher led E-M/N with a home run, ground-rule double, single, two RBI and one run. Jakob Boucher reached base on one single and one error and added one run and one RBI sacrifice fly. Lane Fox scored once and reached on a double and error, and Widler generated one double, one single, one walk and two runs.

Spiegel drew two walks, reached once on an error and scored once, and Oehlerking tallied one walk and one RBI. Ty Fox had one single, one run and one RBI, Noah Willey was struck once by a pitch and Hosier crossed the plate once. Spellman and Bauder each had one single and one RBI and Gansemer posted one single.

Gansemer and Lane Fox teamed up for the pitching victory. Gansemer worked five innings and struck out seven Lions. Fox threw ten pitches in the sixth inning and pocketed a pair of strikeouts.

Louisville/Weeping Water will face third-seeded Valparaiso at 4 p.m. today in the elimination bracket. The Nationals will square off with top-seeded Malcolm tonight at 7 p.m. The tournament will continue on Sunday with games at 4 and 7 p.m. in Malcolm.

ELMWOOD – Elmwood-Murdock and Tri County marched back and forth on the football field Friday night in a high-scoring game.

PALMYRA – Palmyra picked up a home victory over Conestoga on Friday night by posting balanced numbers on the offensive side of the ball.

LINCOLN – Elmwood-Murdock golfers celebrated with a conference plaque Tuesday after they earned runner-up honors in the league tournament.

SPRINGFIELD – Most teams would consider compiling 16 runs in one game as a successful day on the softball diamond.

PLATTSMOUTH – Weeping Water unearthed a diamond-level victory over Plattsmouth on Monday by creating gems on every part of the field.

PLATTSMOUTH – Plattsmouth athletes continued their award-winning start to the season Saturday morning with multiple medals in a large meet.

FALLS CITY – Weeping Water students produced smiles in the dugout on Saturday by winning a pair of games at the Falls City Invite.

OMAHA – Plattsmouth softball players continued their winning ways Saturday by claiming a pair of games at the Omaha Mercy Invite.