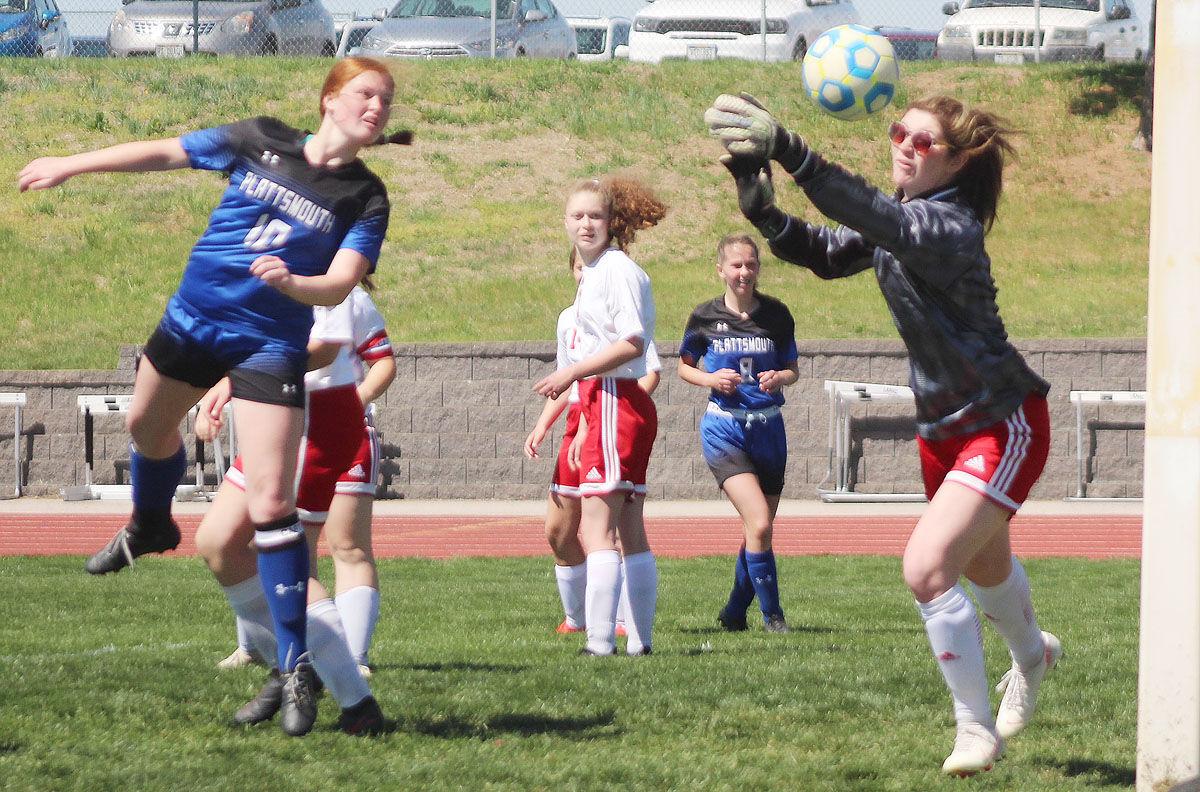 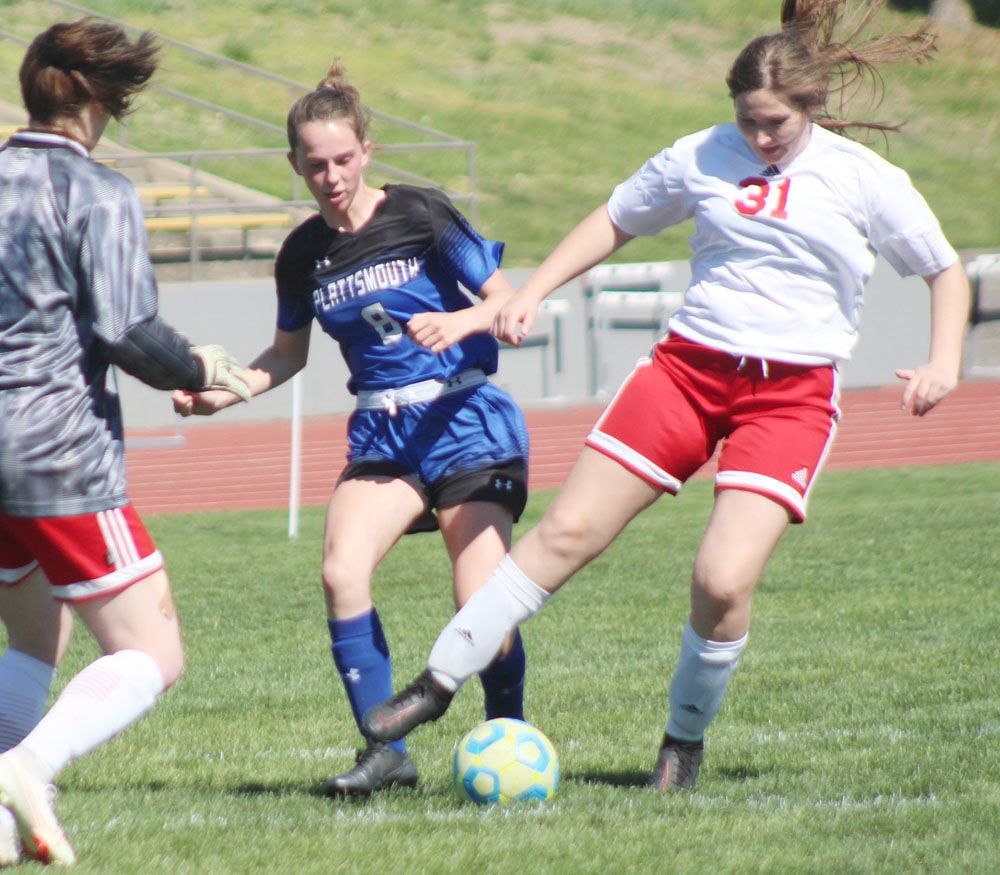 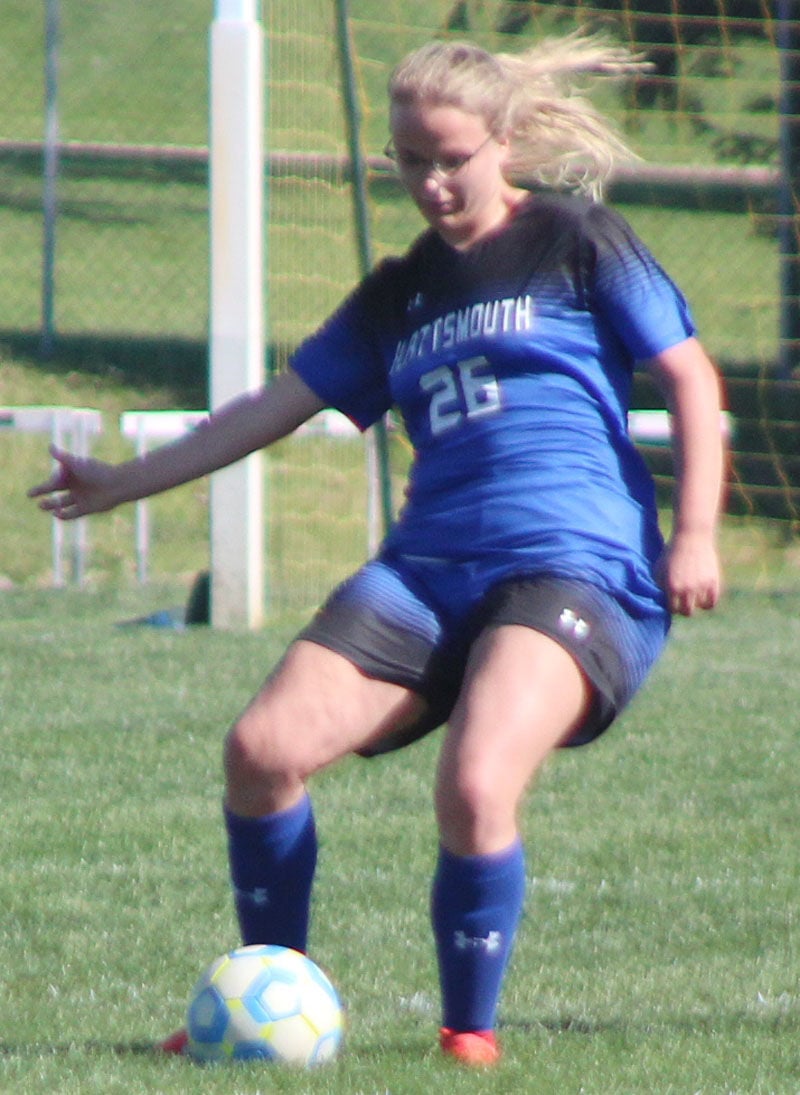 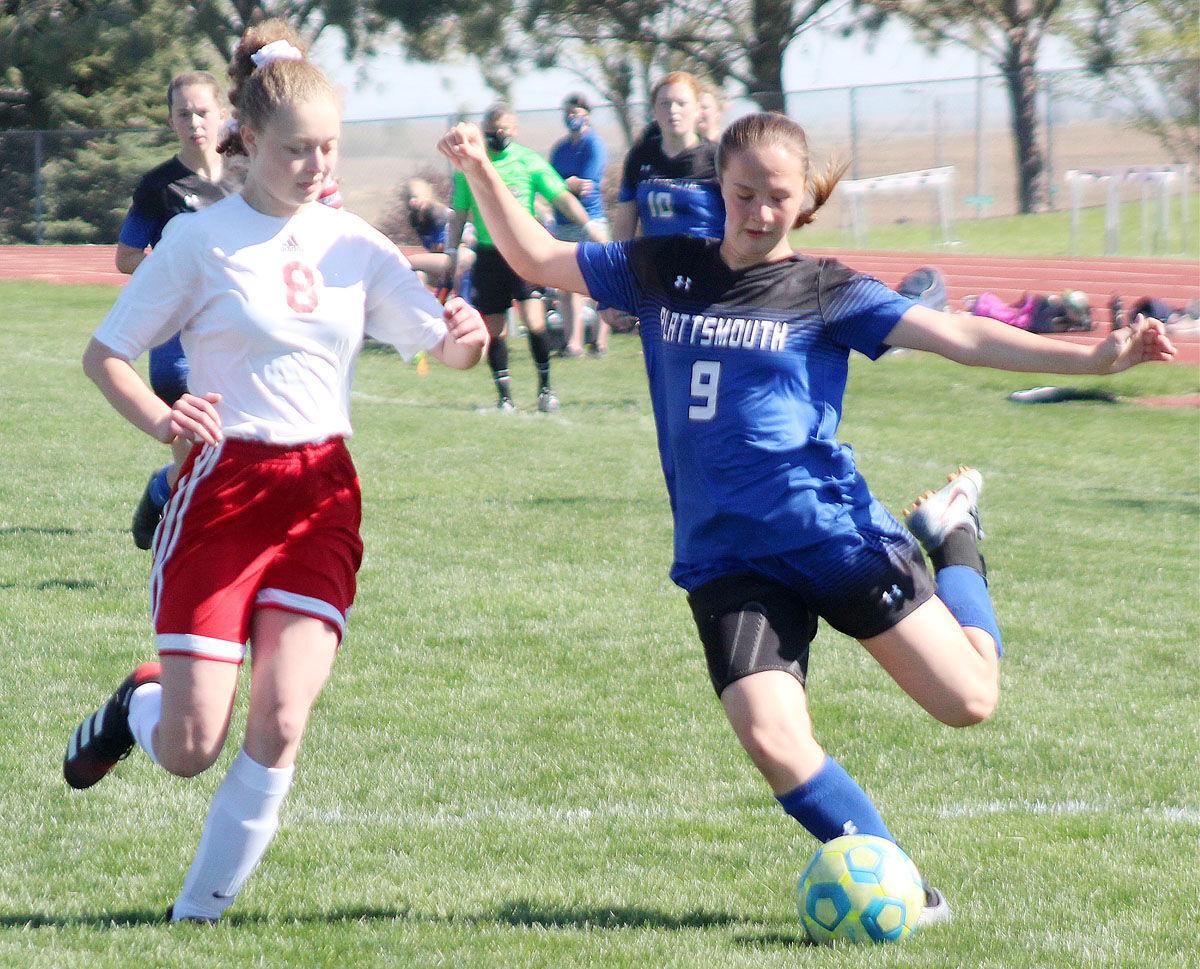 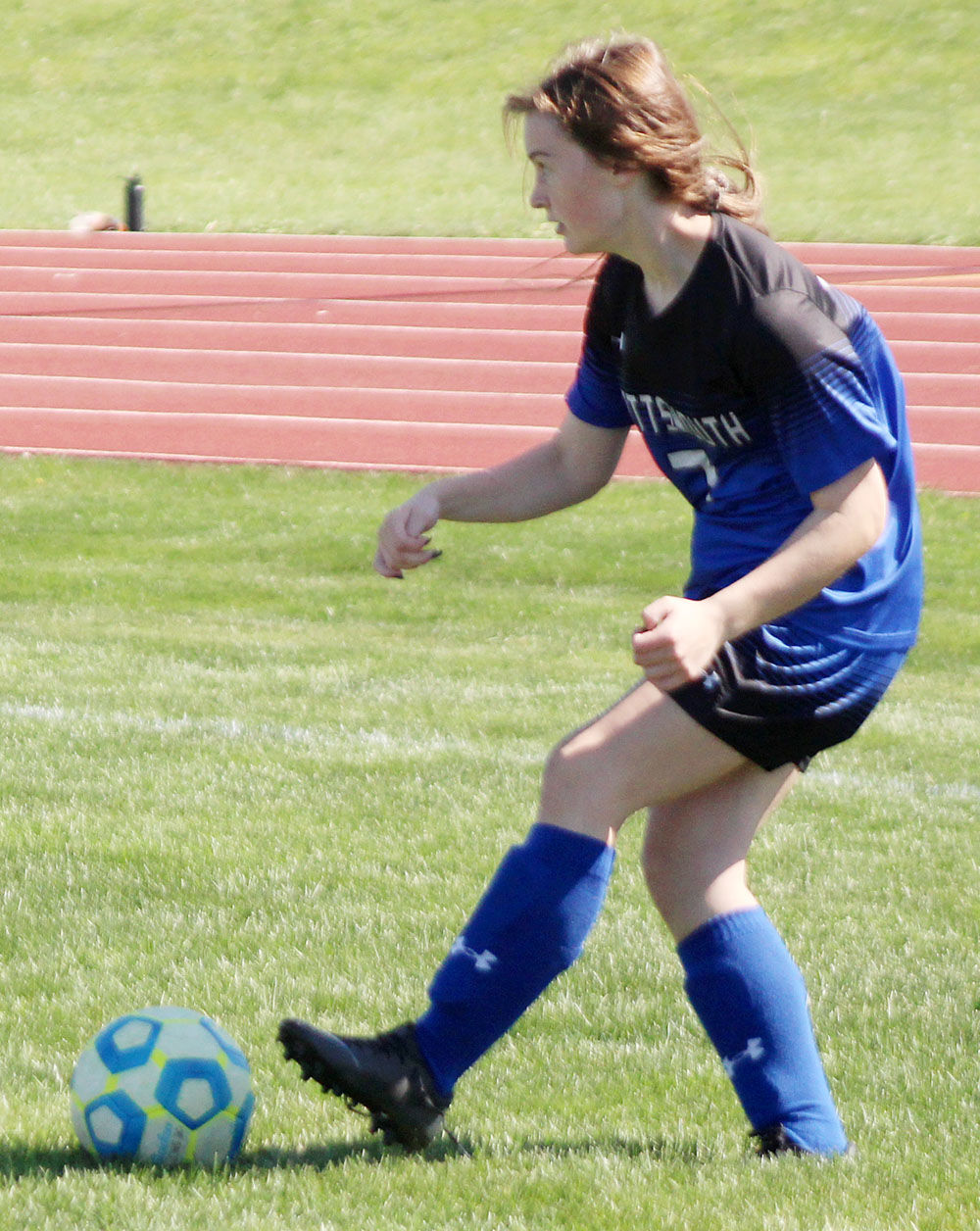 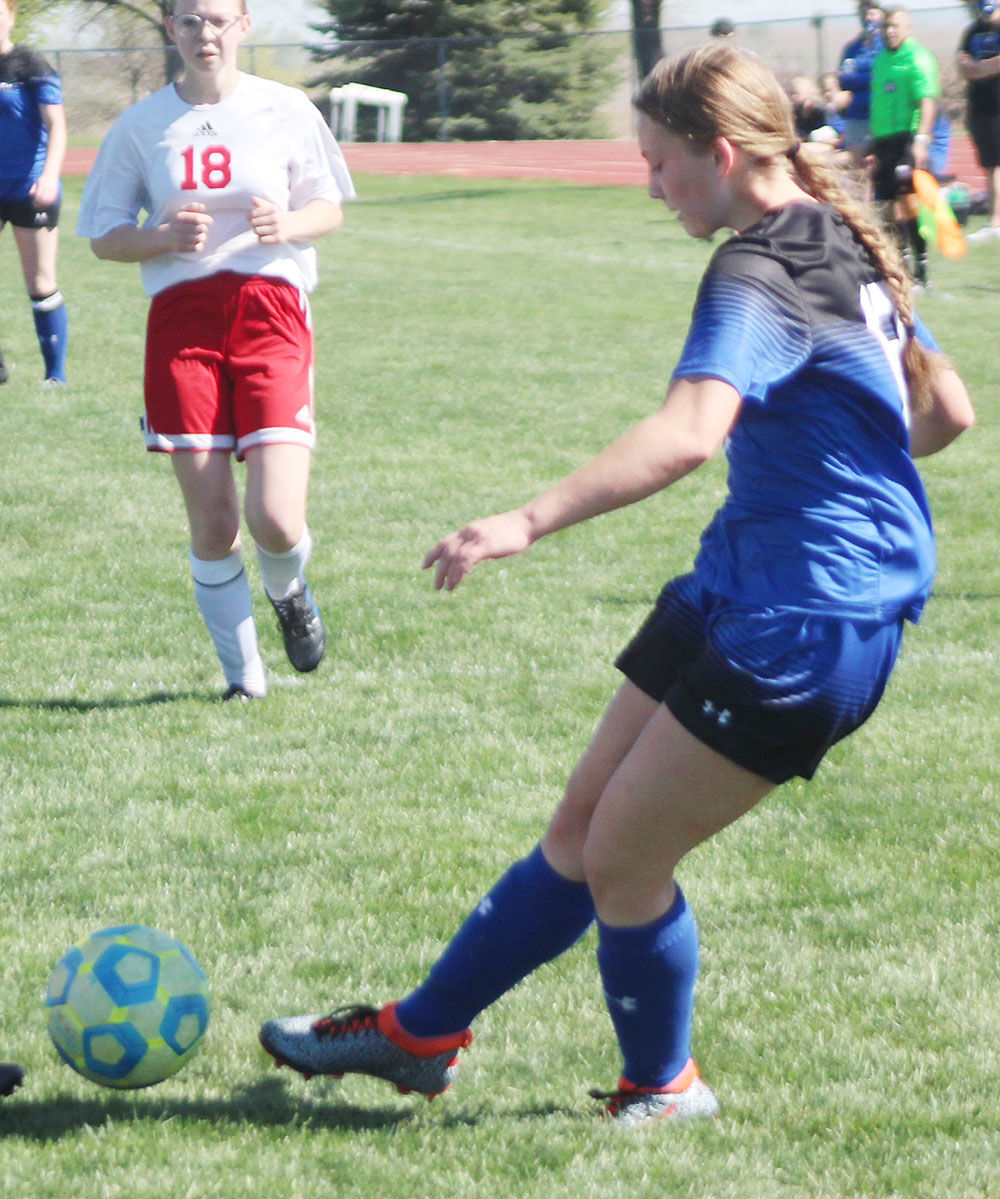 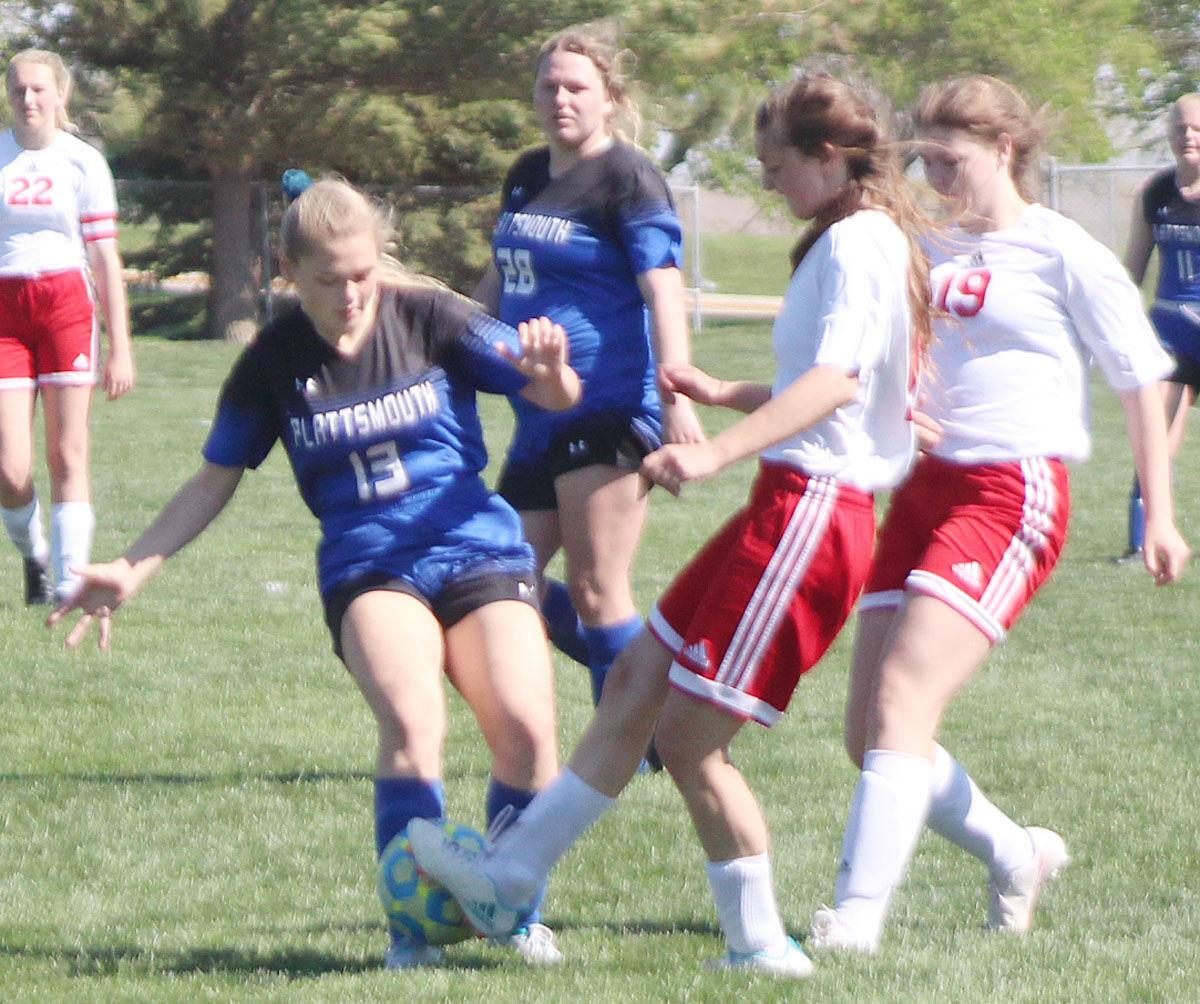 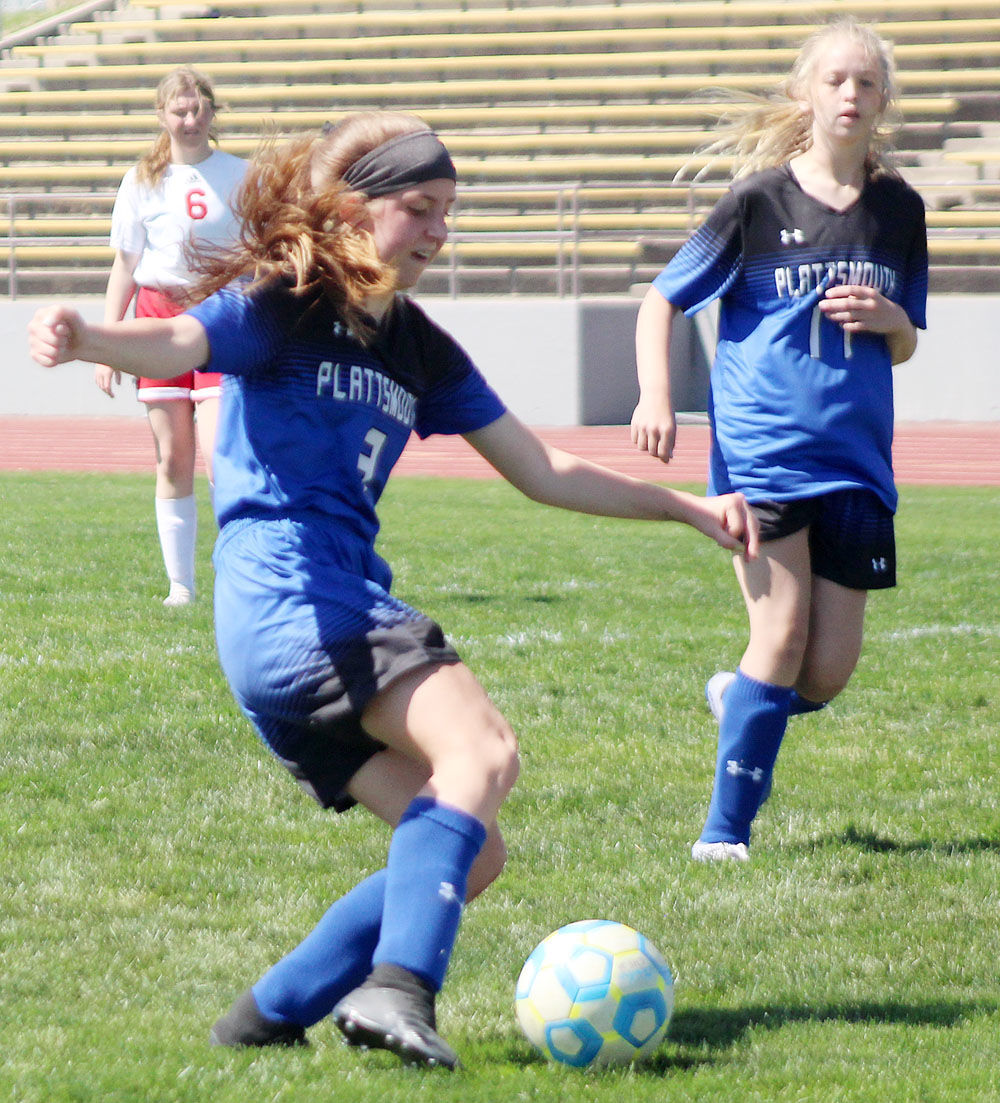 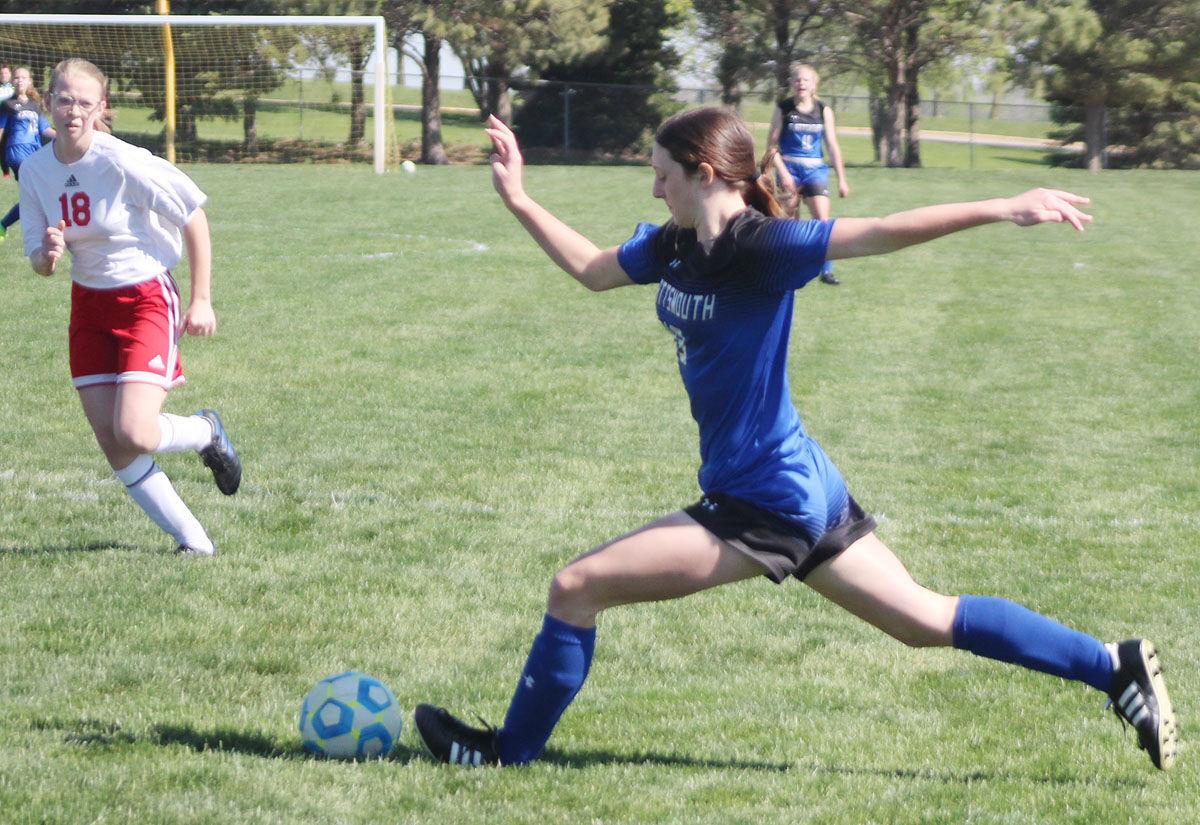 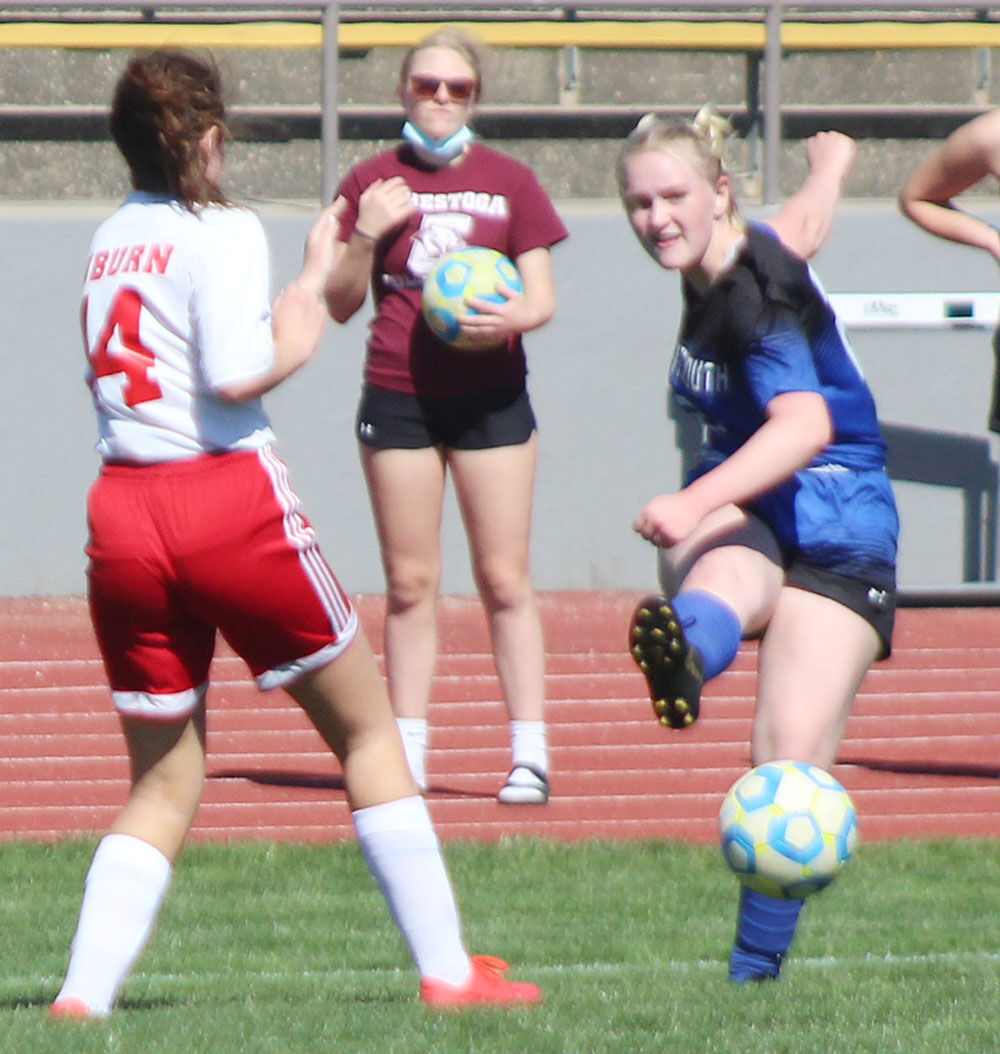 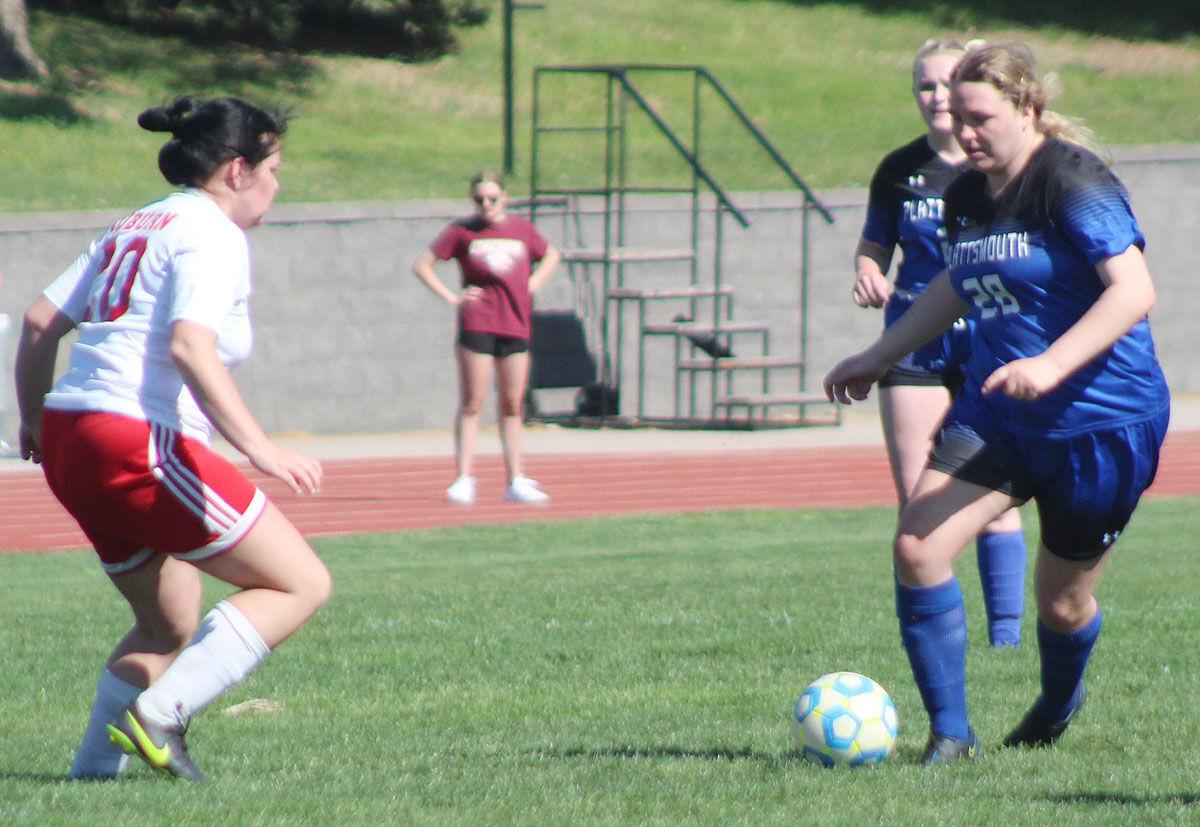 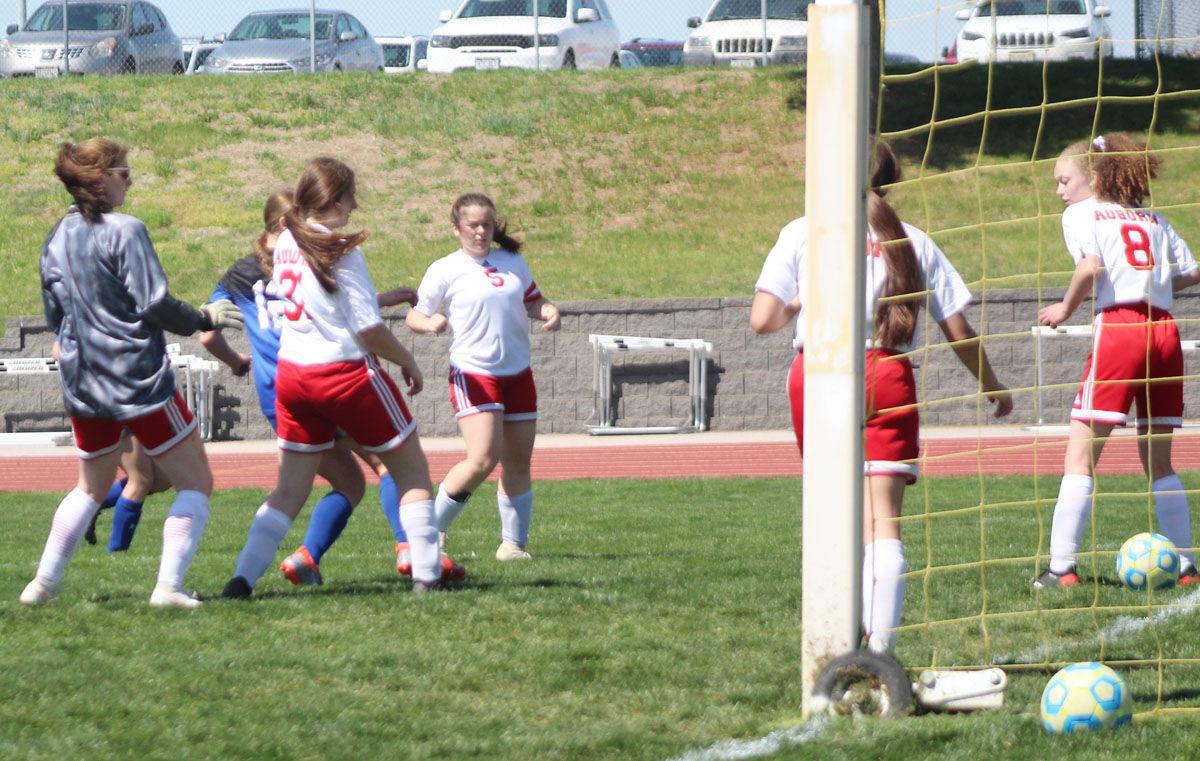 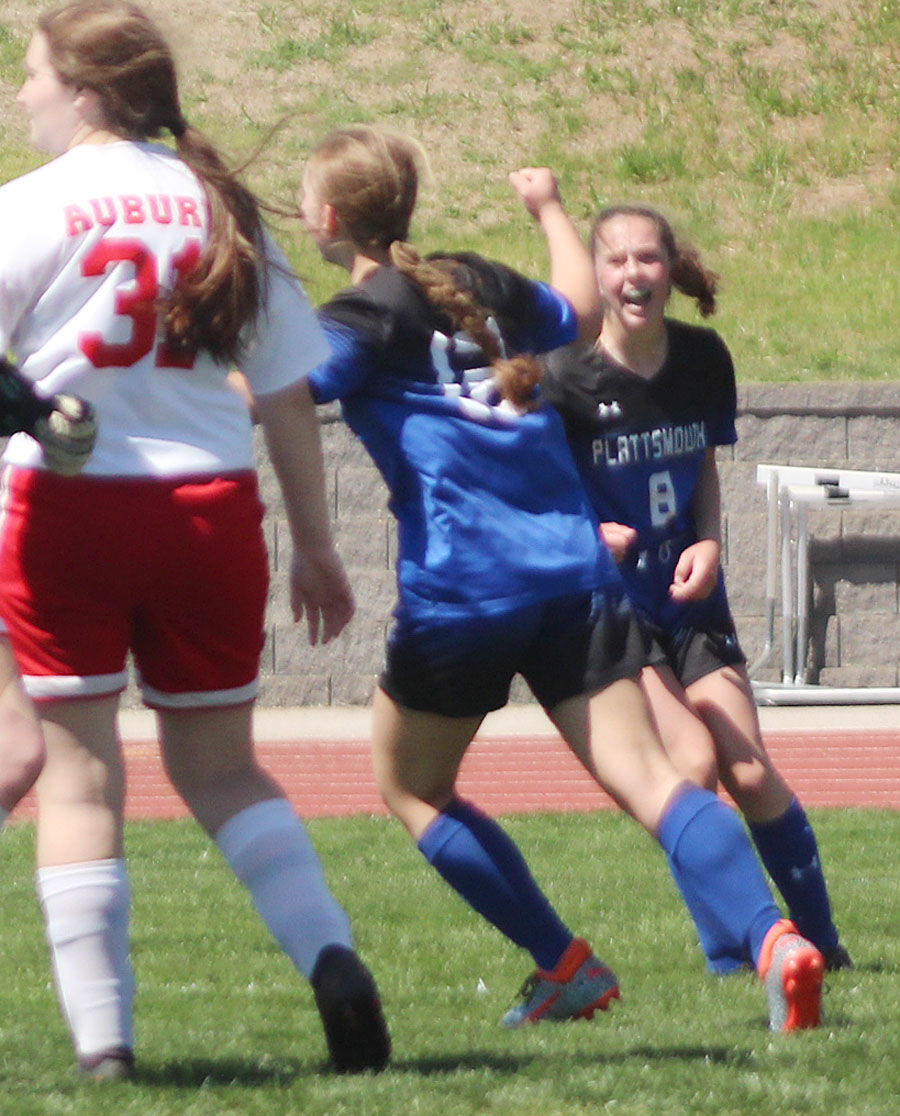 CONESTOGA – The Plattsmouth girls stamped their passport to a winning destination Saturday morning with a dramatic ending to their soccer match.

Ireland Todd scored with 51 seconds left in regulation to lift PHS past Auburn 2-1 in the Subdistrict B-1 Tournament. Todd redirected a corner kick from Kaley Clark into the net to help the Blue Devils advance to the subdistrict title game.

PHS head coach Trey Cossel said the Blue Devils were thrilled to emerge on the winning side of the scoreboard. Plattsmouth and Auburn had played the previous week and had ended the regular-season game tied at 1-1. PHS secured the victory in that matchup after winning a penalty-kick shootout 5-4.

“We were really excited on the bench when we saw Ireland’s shot go in, and I know all of the girls on the field were too,” Cossel said. “I feel pretty confident that we would have won if we had gone into overtime, but it was better to not even have to take a chance with that. I’m really proud of our girls right now and the way they played today.”

The teams played their subdistrict semifinal in gusty conditions at Conestoga’s Cougar Stadium. Winds whipped across the field at speeds of 35 miles per hour, which affected shots on goal, corner kicks and the passing strategies of both schools.

Cossel said senior captain Kassidy Fisk chose to have the wind at Plattsmouth’s back for the second half during the pregame coin toss. He said that decision paid dividends for the team on the scoreboard.

“We definitely wanted to finish with the wind in the second half,” Cossel said. “We’ve been a better second-half team this year, so we felt if we had the wind with us late in the game it would help a lot.”

Plattsmouth offset the wind with a ground-based attack in the first half, and crisp passing nearly led to several goals. Aimee Dasher connected on a shot from the lefthand side that rolled two feet in front of the net in the first ten minutes. Emily Zitek then made a stop-and-turn shot with 21:36 left that required a save from Auburn.

Todd and Dasher produced quality shots with 15:01 and 8:29 to play in the first half, but Auburn made saves on both attempts. Plattsmouth’s work on offense paid off midway through the second half. Todd found the ball at the top of the penalty box and scored on a lightning-quick shot with 20:22 remaining.

Auburn made a one-handed save on a shot by Clark three minutes later, and Todd came close on her running attempt with 16:15 left on the clock. Plattsmouth kept pressure on the Bulldogs with a handful of corner kicks during the next 15 minutes.

The Blue Devils came through on their final corner kick of the game. Clark struck a ball from the righthand corner that landed near Todd in the penalty box. She scooted the ball on the ground for the winning goal. Plattsmouth melted the final 51 seconds off the scoreboard to secure the victory.

“The girls came here ready to play today, and overall I’m really happy with how things turned out,” Cossel said. “It was a shame that Auburn scored in the first half, but the girls did a great job of remaining positive and sticking with our game plan. They kept believing the whole time.

“We controlled the ball quite a bit in the first half, and we did a great job of keeping it in their end in the second half. I liked how many shots we took the whole game, and if you keep on taking shots then some of them are bound to go in.”

Second-seeded Plattsmouth will return to Cougar Stadium on Tuesday, May 4, for the Subdistrict B-1 championship match. The Blue Devils will play top-seeded Conestoga at 5 p.m. The winner will advance to the district finals on Saturday, May 8, at a site and time to be determined.

LINCOLN – Cass County students have earned prestigious state honors for their efforts inside and outside school walls.

PLATTEVIEW – Plattsmouth track and field athletes felt success was in store for them when they traveled to the district meet on Thursday morning.

LINCOLN – Elmwood-Murdock golfers produced successful numbers on their scorecards Tuesday during a trip to the Lincoln Christian Invite.

NORRIS – The Conestoga girls did their best to solve a Norris puzzle on the soccer field Saturday morning.