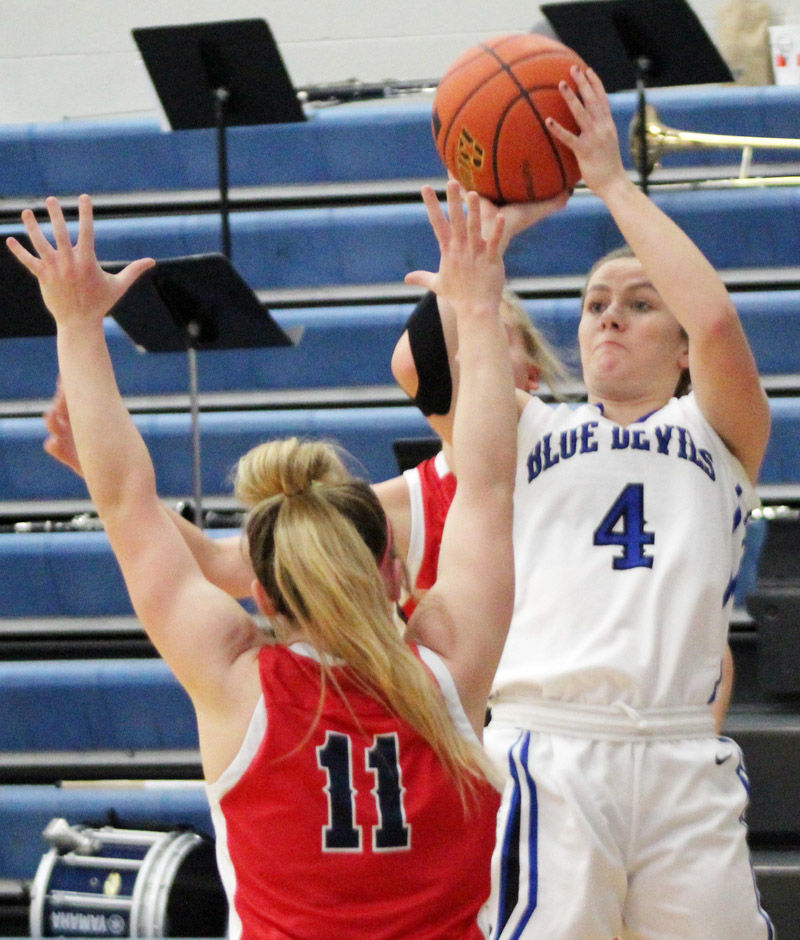 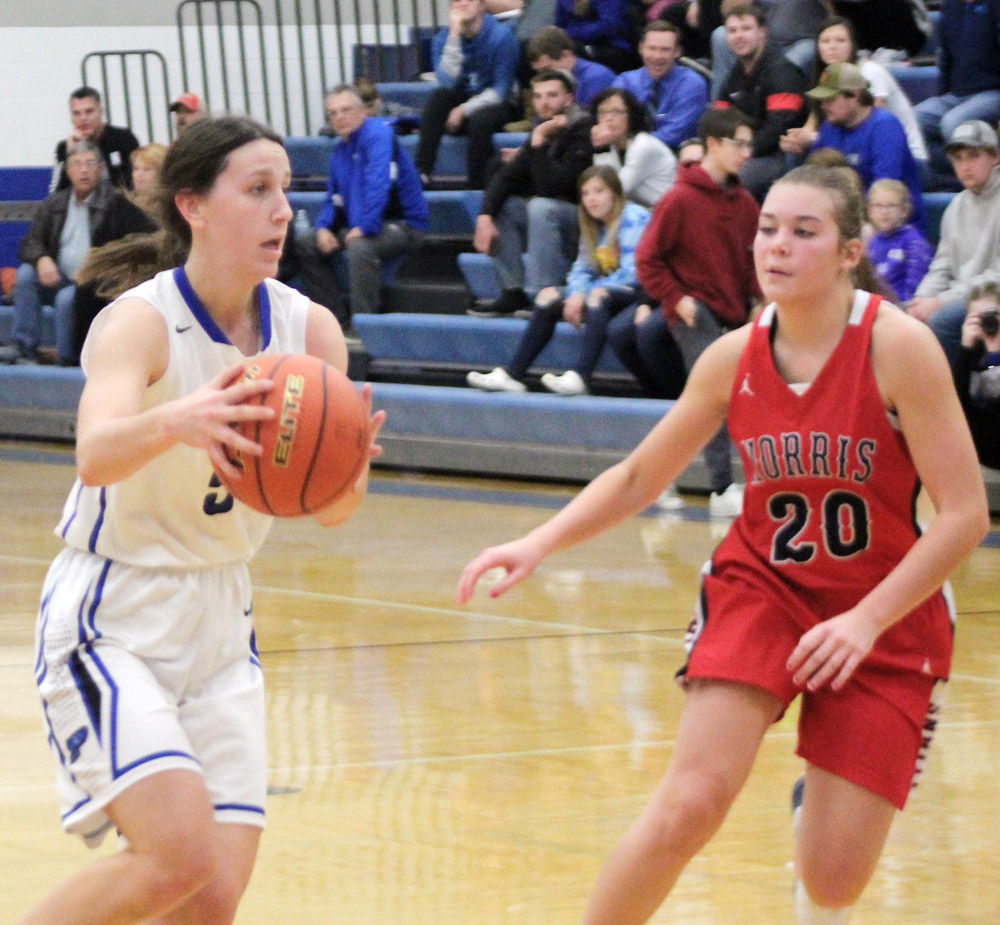 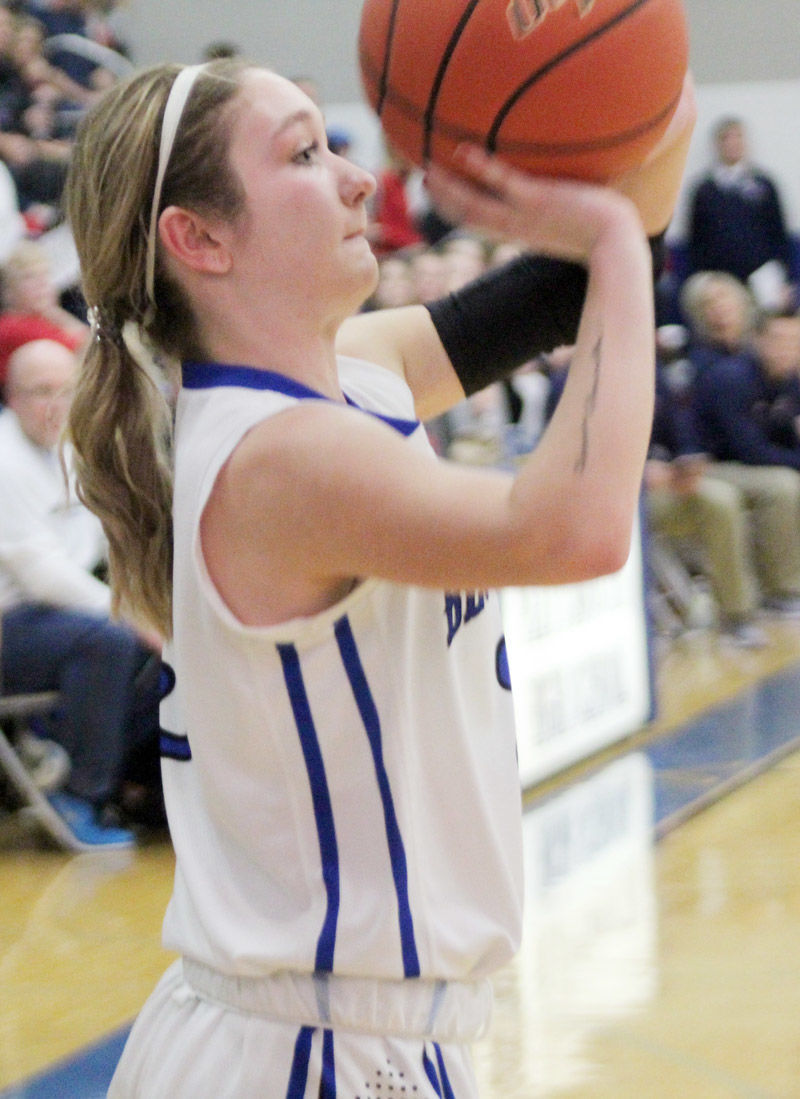 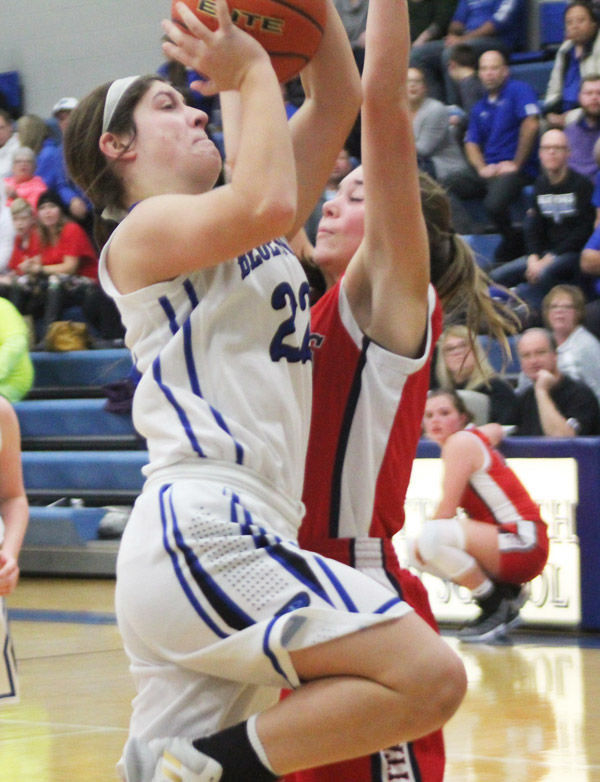 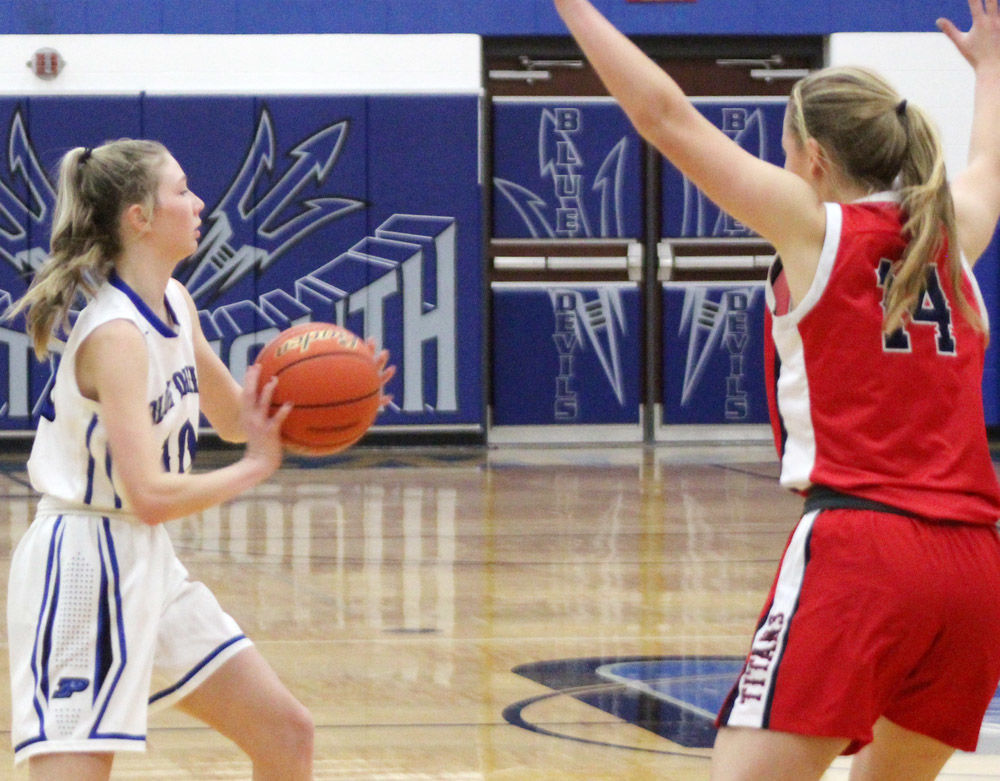 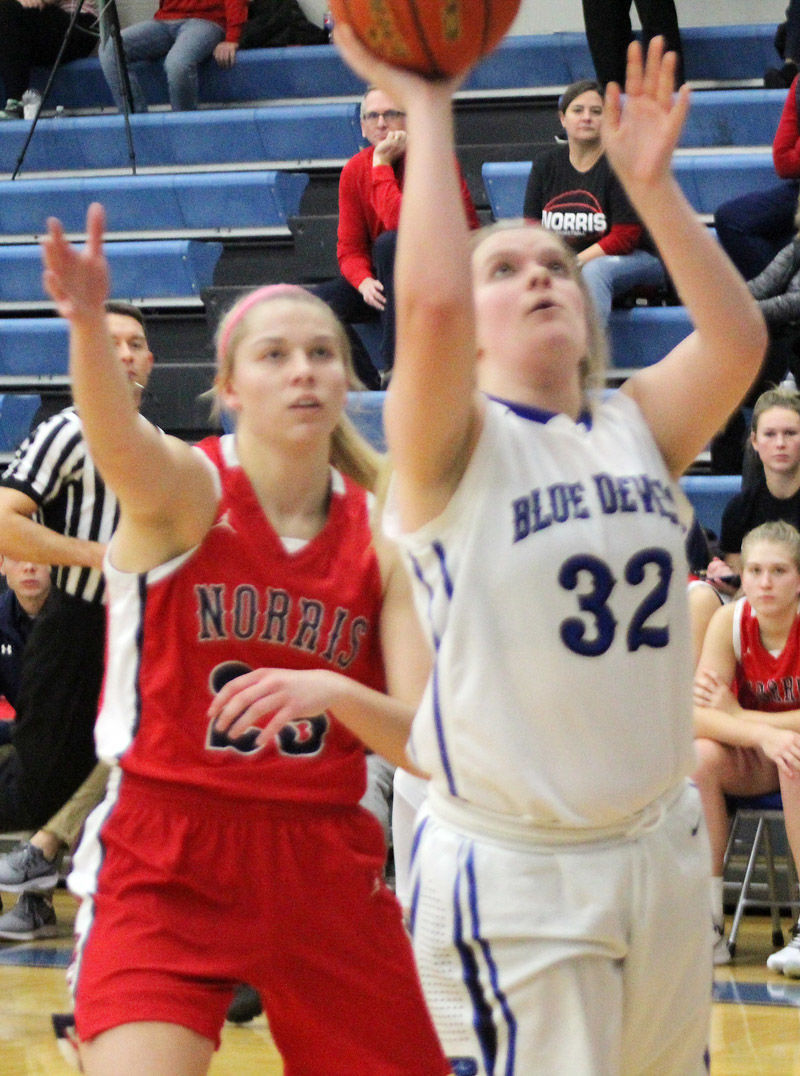 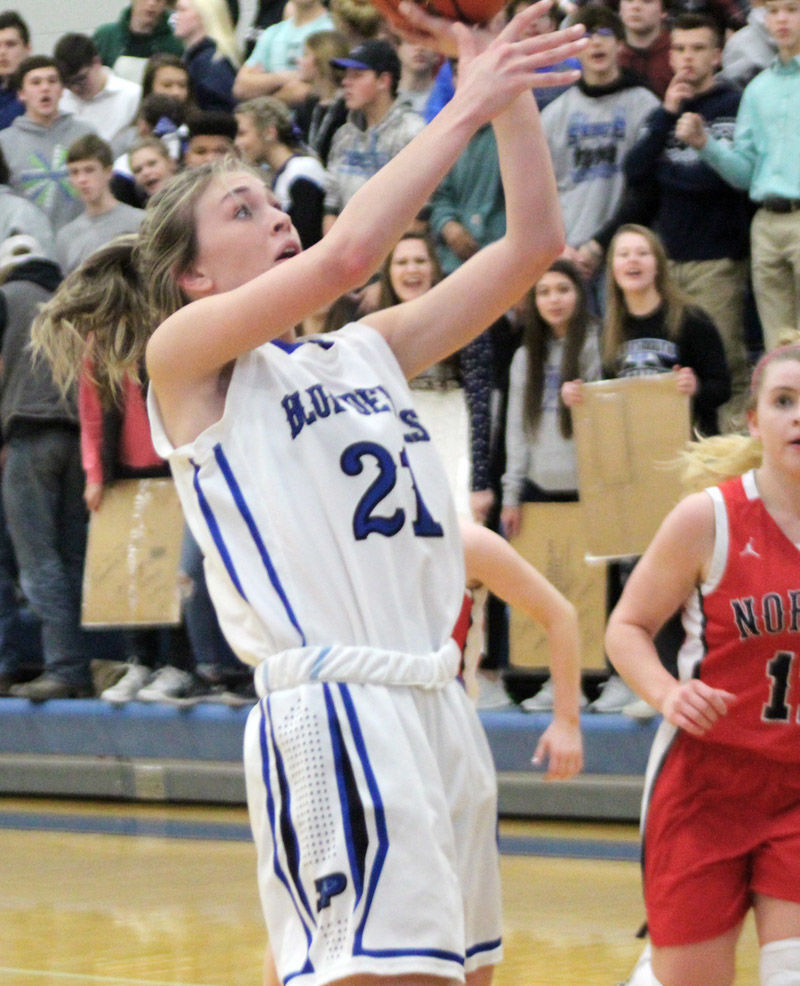 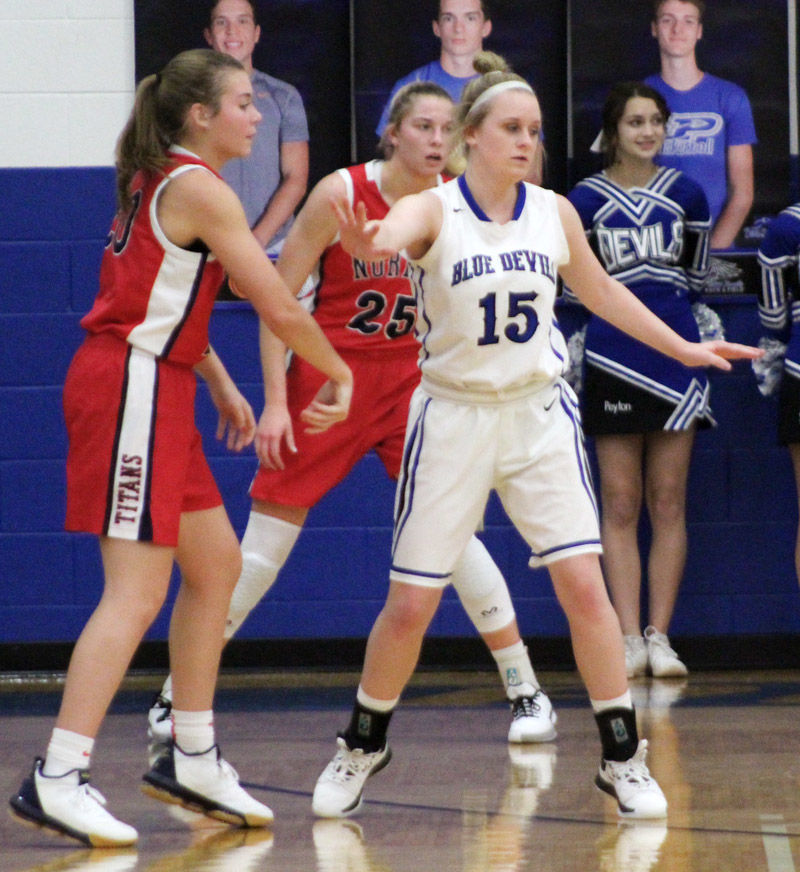 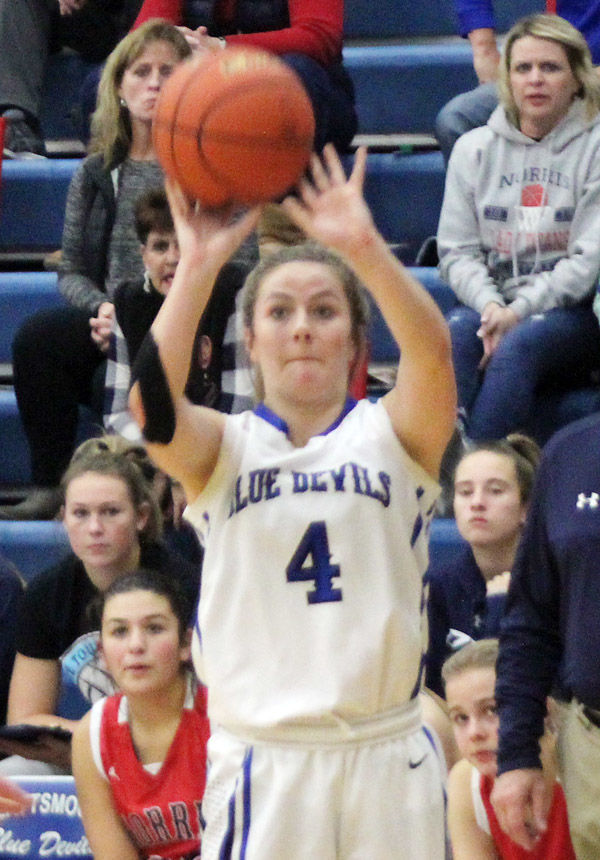 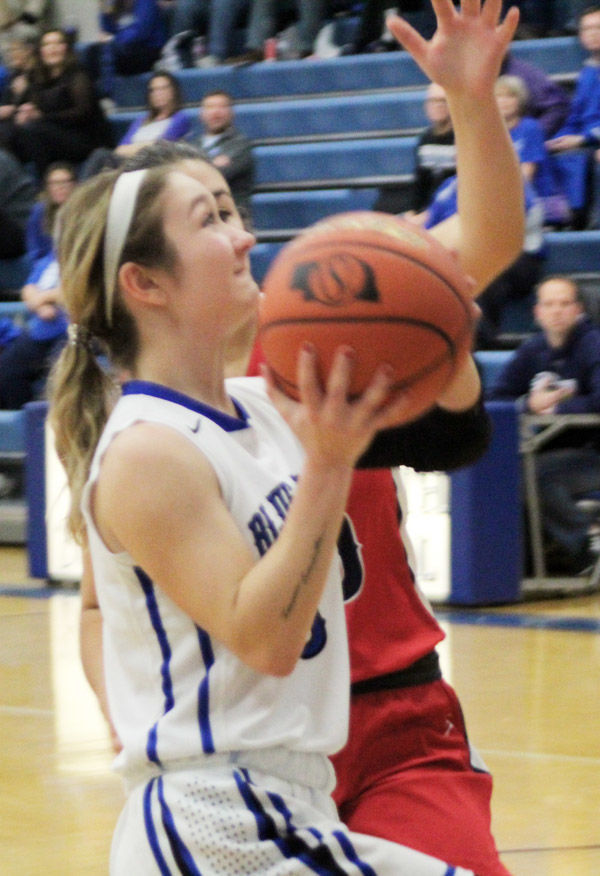 PLATTSMOUTH – The Plattsmouth girls began their basketball season Friday night believing they would take down one of the top teams in Nebraska.

That optimistic outlook nearly helped the Blue Devils achieve that goal against Norris.

Plattsmouth went toe to toe with the third-ranked Titans before Norris pulled out a 56-51 victory. The Blue Devils showed significant improvement against one of the strongest programs in the Eastern Midlands Conference. Norris had defeated Plattsmouth by scores of 51-13 and 60-18 the past two seasons.

“I don’t like to lose, but I’m very happy with the way the girls played tonight,” Plattsmouth head coach Steve Owens said. “This is the closest we’ve been to Norris in the five years I’ve been here. This is a big deal to play Norris the way we did and have a great chance to win.

“I’m very pleased with the effort the girls showed tonight. Hopefully this is a sign of a lot of good things to come for us this year.”

The Blue Devils used their box-out and defensive skills to neutralize Norris’ advantage in the paint. Norris starters Kalli Kroeker, Brianna Stai and Ella Waters were all listed in the program as being 6-foot-0 or taller. No one on Plattsmouth’s roster is taller than 5-9.

“Our girls played with so much effort and intensity on defense, and especially when it came to rebounding the basketball,” Owens said. “I’m starting girls who are 5-3 and 5-4 and they had girls who are 6-2 and 6-0, and we were the ones getting the rebounds and keeping them to one shot. Our girls showed a lot of heart out there.”

Norris threatened to pull away in the early going. The team went ahead 10-6 midway through the first quarter and led 16-10 after eight minutes. Stai’s 3-pointer from the corner early in the second period made it 19-10.

Plattsmouth responded with a scoring spree on the next five trips. Chloe Sabatka, Kira Leget and Bella Chappell drained three consecutive treys to tie the game, and baskets from Chappell and Taylor Caba gave the team a 23-21 edge.

Leget dished an assist to Lexi Schroeder on a jumper two minutes later, and Sabatka found Leget open for a 3-pointer 1:10 before the break. A pair of free throws from Schroeder helped the Blue Devils take a 30-28 lead into the locker room.

Plattsmouth went ahead 39-38 on Lyndsey Caba’s assist to Taylor Caba late in the third quarter. PHS stretched the gap to 44-38 after Chappell buried a 3-pointer and layup. Consecutive treys from Leget and a free throw by Schroeder kept the lead at 51-46 with 3:14 to go.

Norris captured the game’s momentum in the final three minutes. The Titans ended the evening with a 10-0 scoring run. Waters tied things at 51-51 with 2:21 left and Kroeker’s short jumper gave Norris a two-point lead. Stai and Kroeker sealed the victory with late free throws.

Chappell and Leget led Plattsmouth’s offense with 15 and 14 points. Chappell chipped in three rebounds and two steals and Leget had one rebound and one assist.

Owens said the Blue Devils would use the lessons they learned Friday night to write successful storylines in future games.

“They care deeply about each other and about this team,” Owens said. “They were upset after the game because they could see it on the clock. They were a couple of minutes away from getting a big win and they wanted to finish it.

“It’s great to see that they care because that’s going to help us get better. They’re going to keep working hard as we move along.”

Omaha Mercy broke a 34-34 tie with a late run against the Blue Devils on Saturday afternoon.