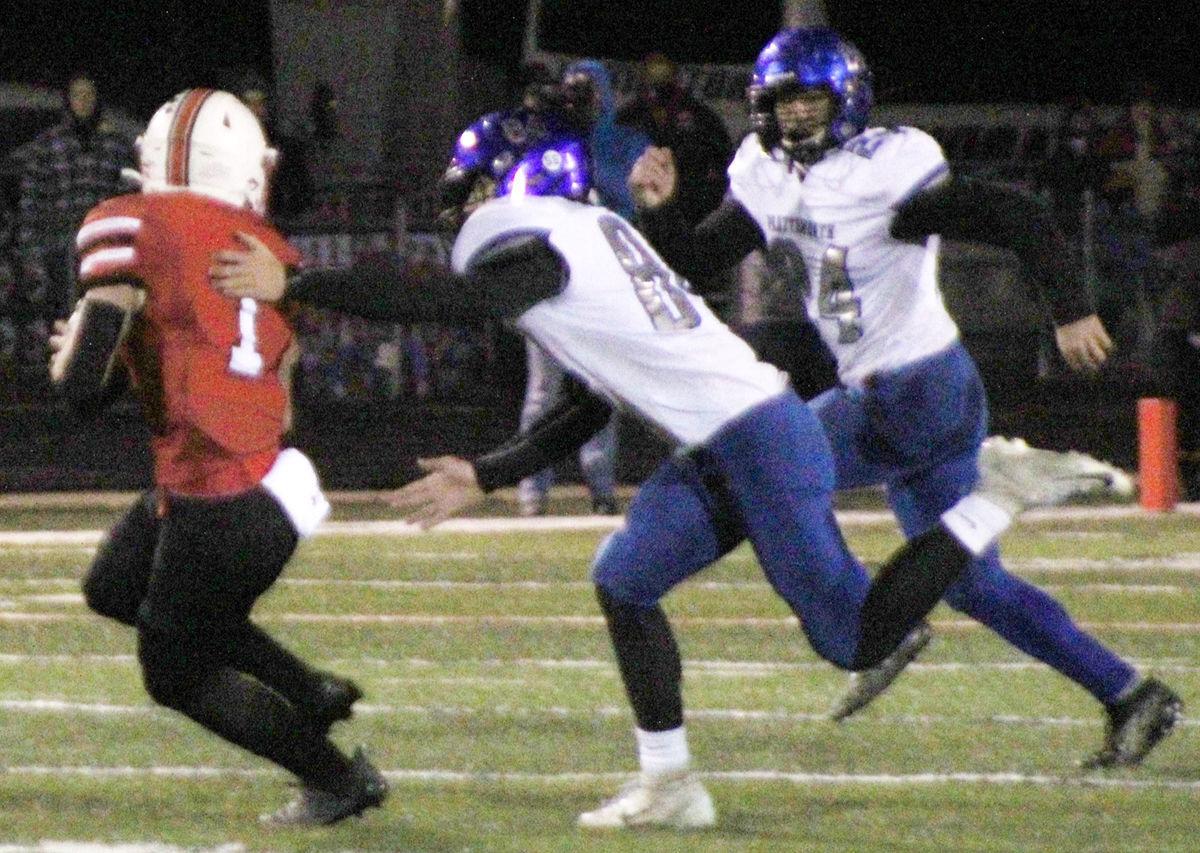 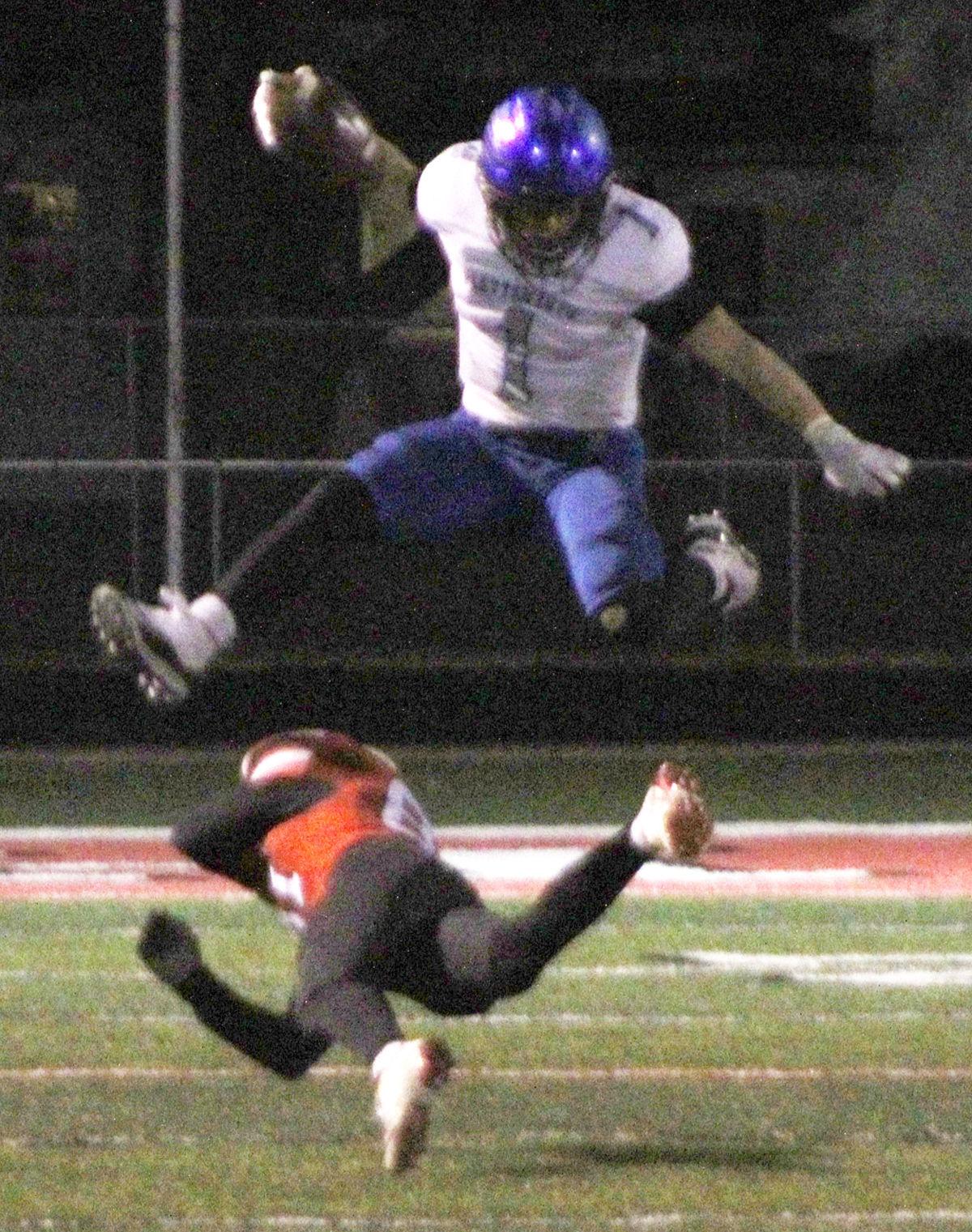 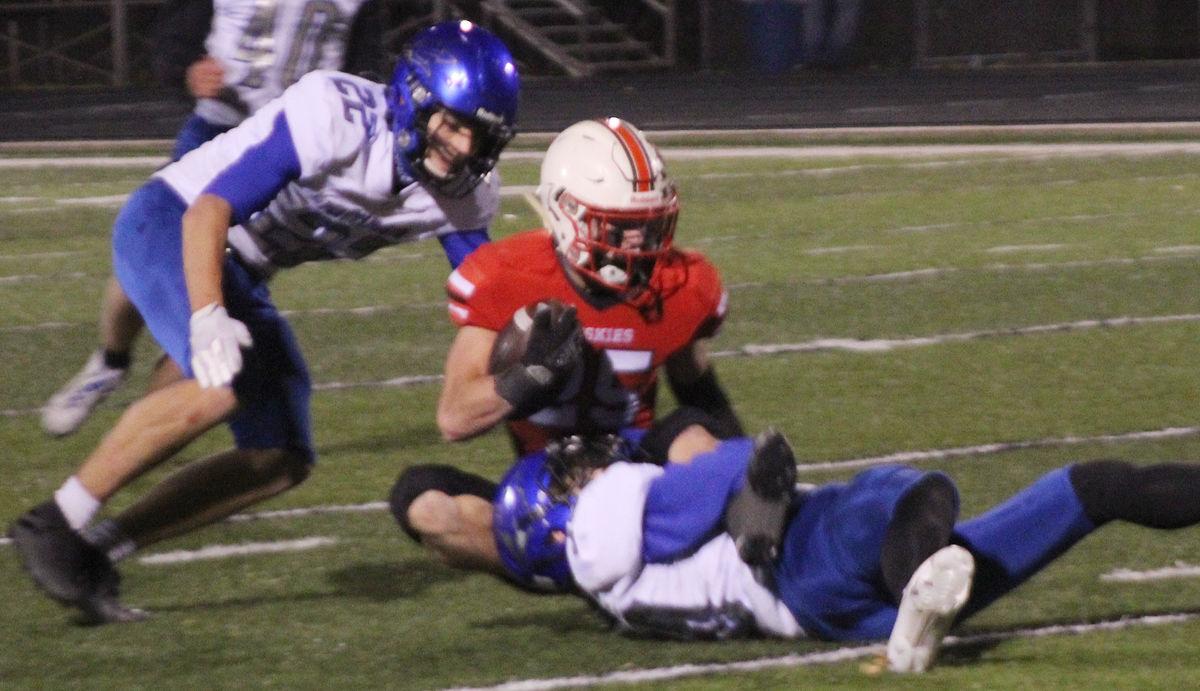 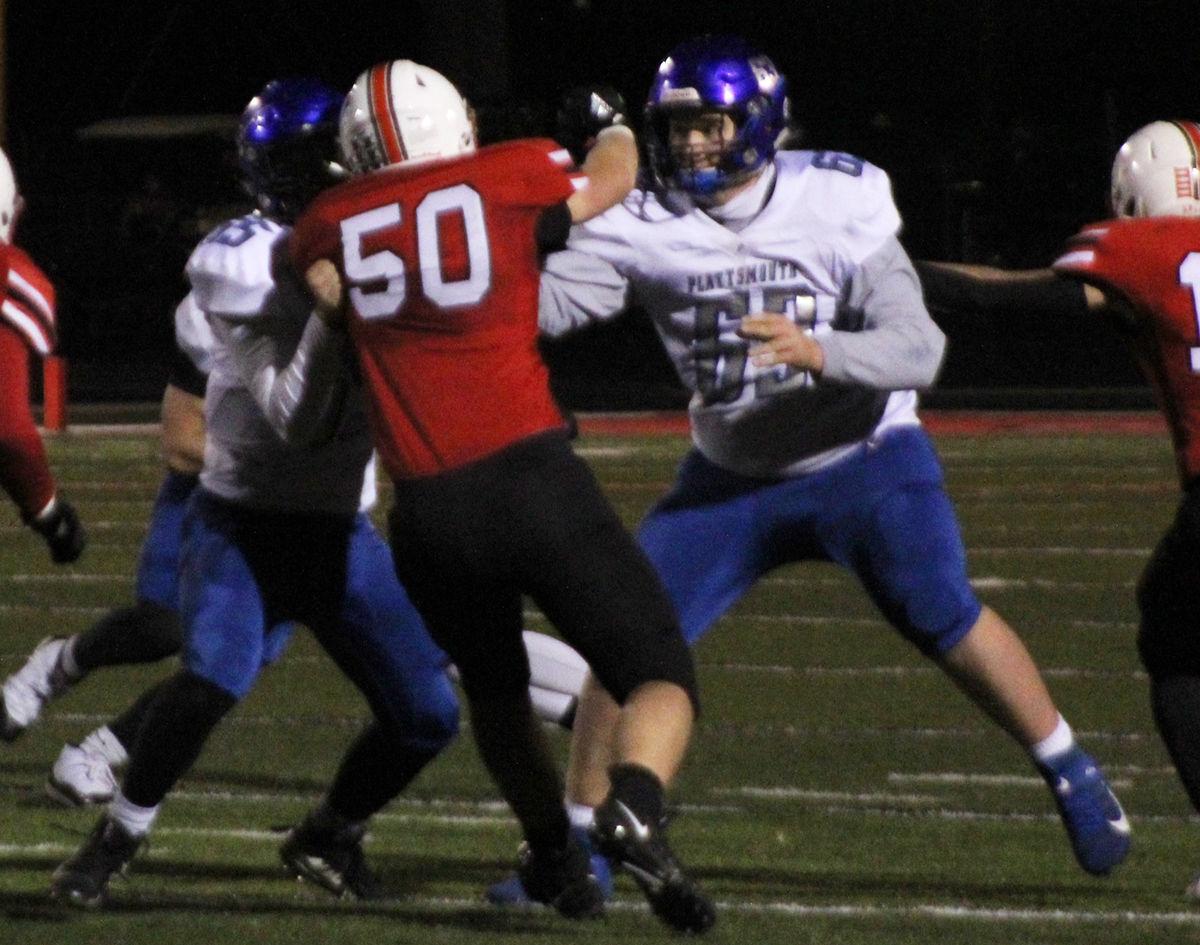 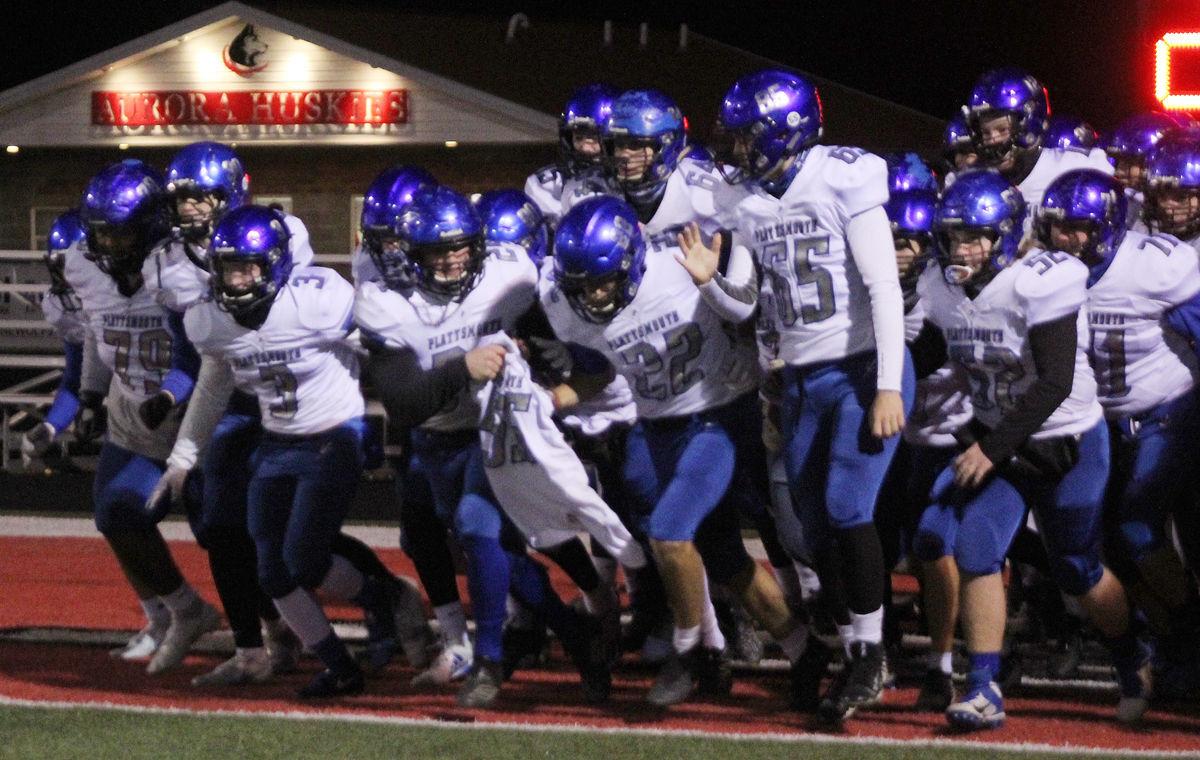 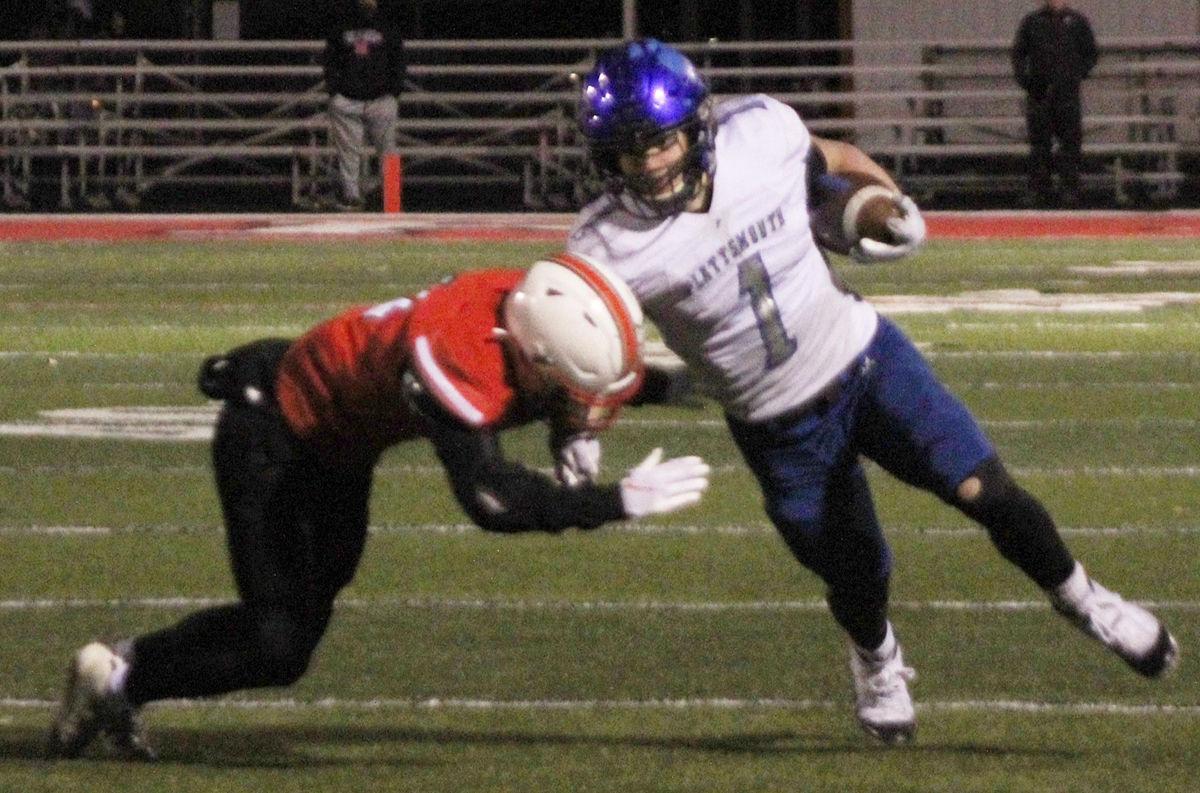 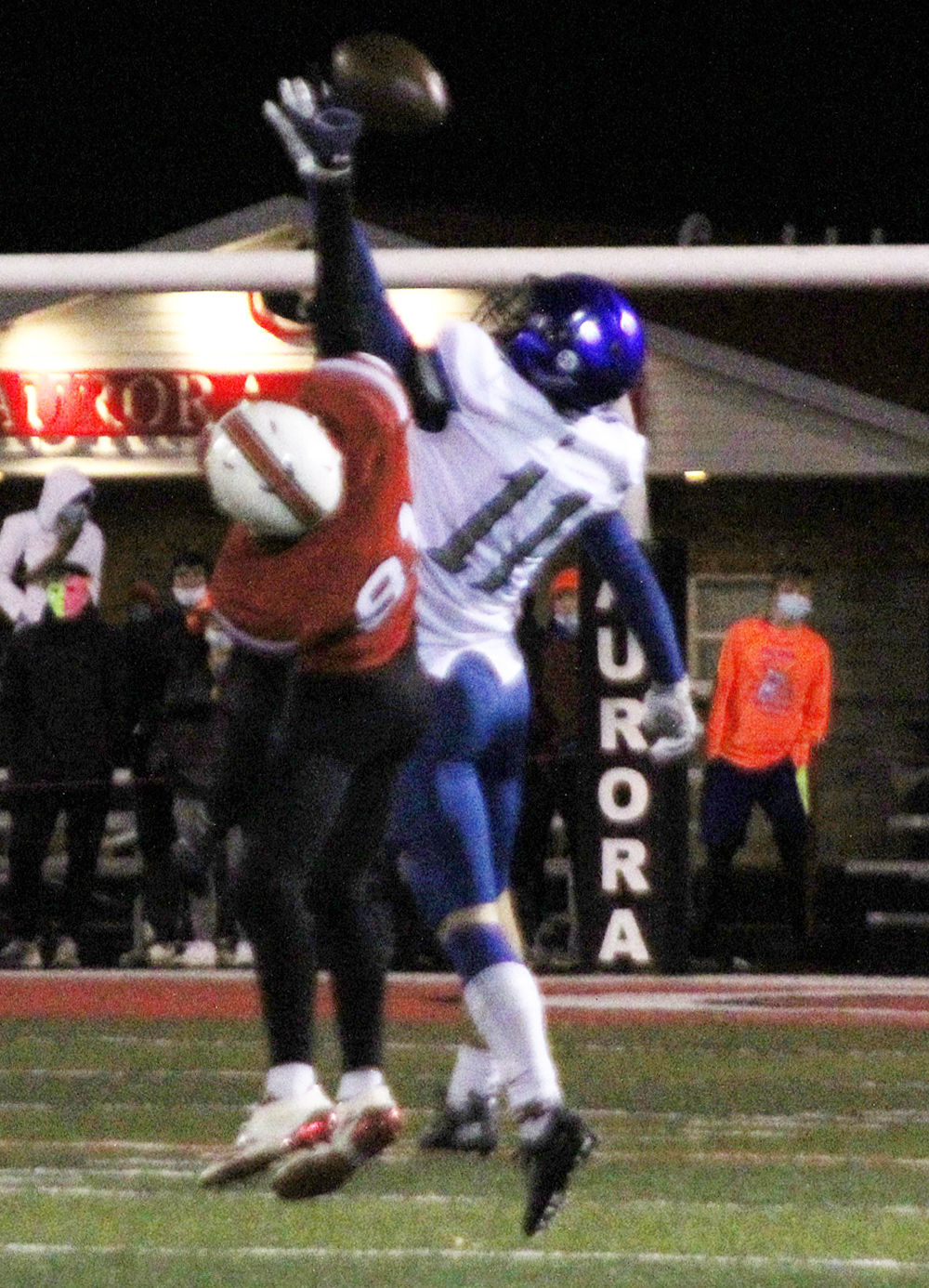 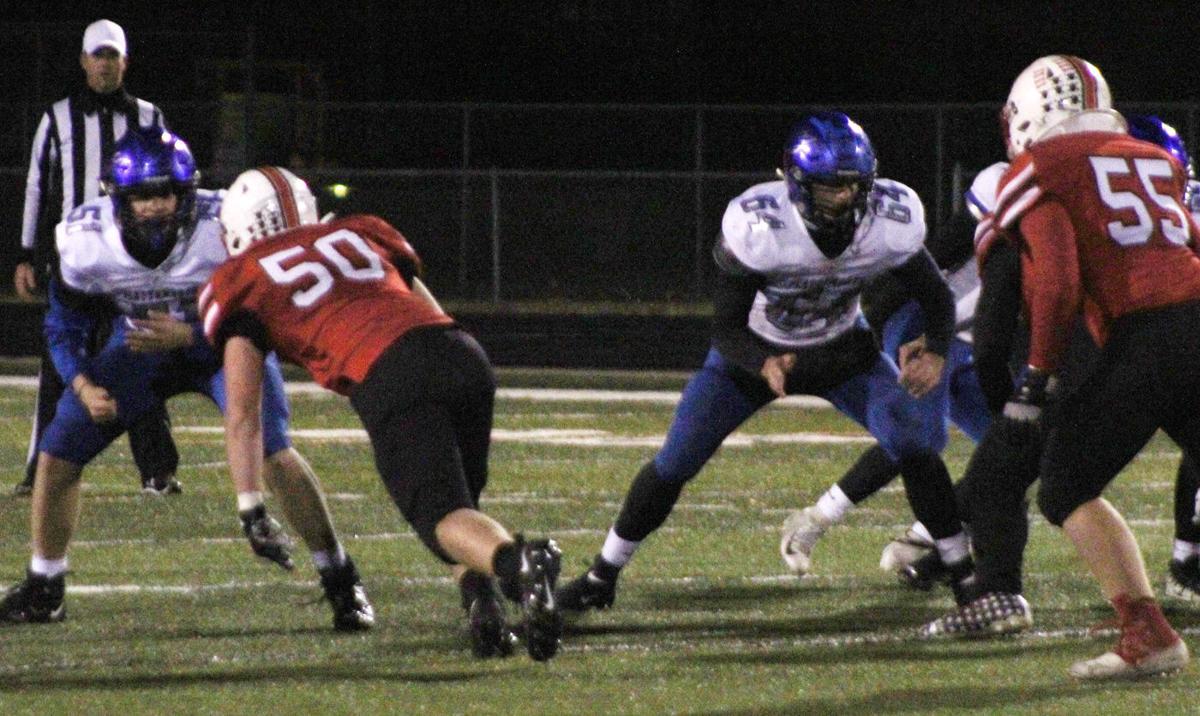 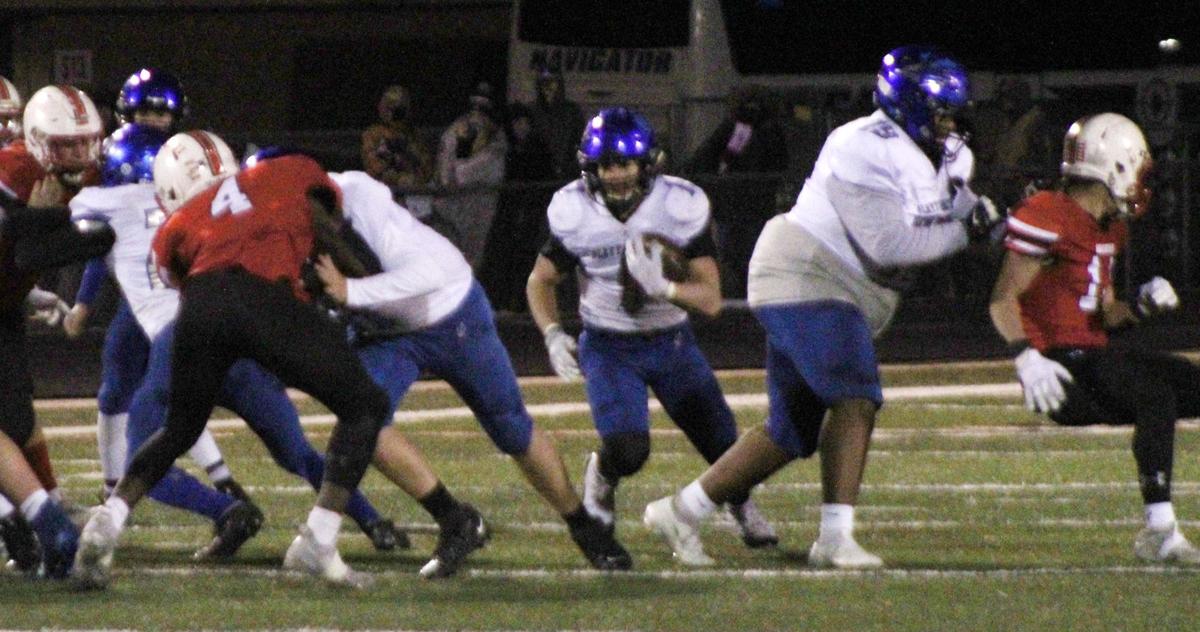 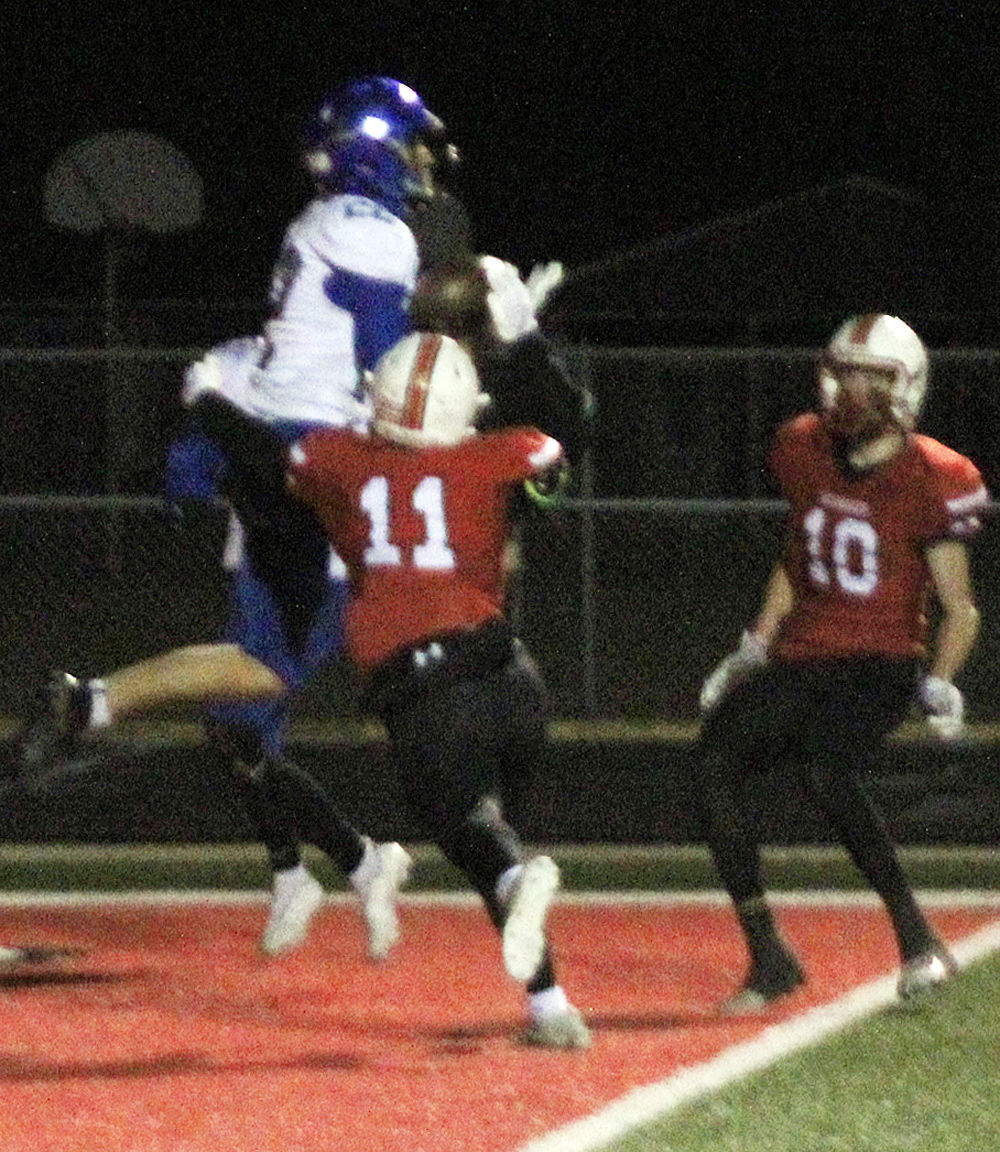 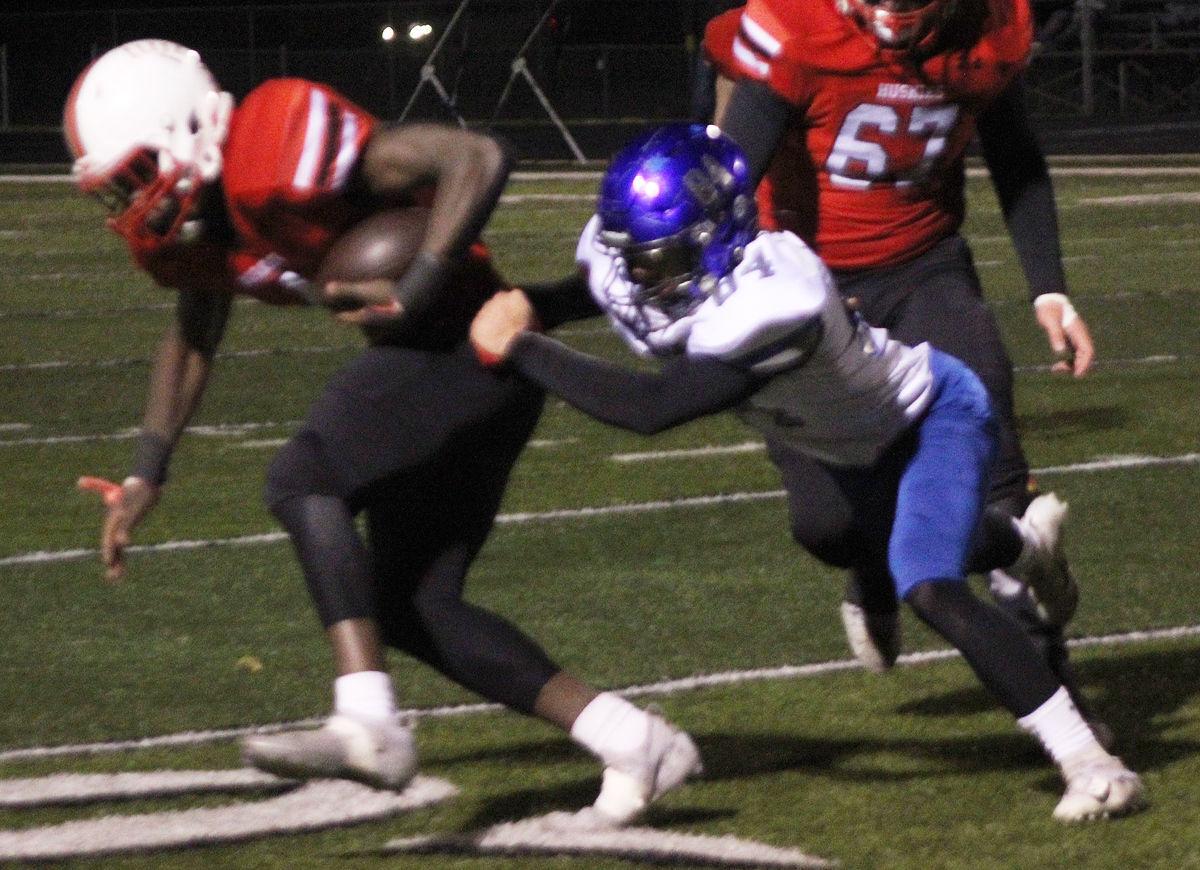 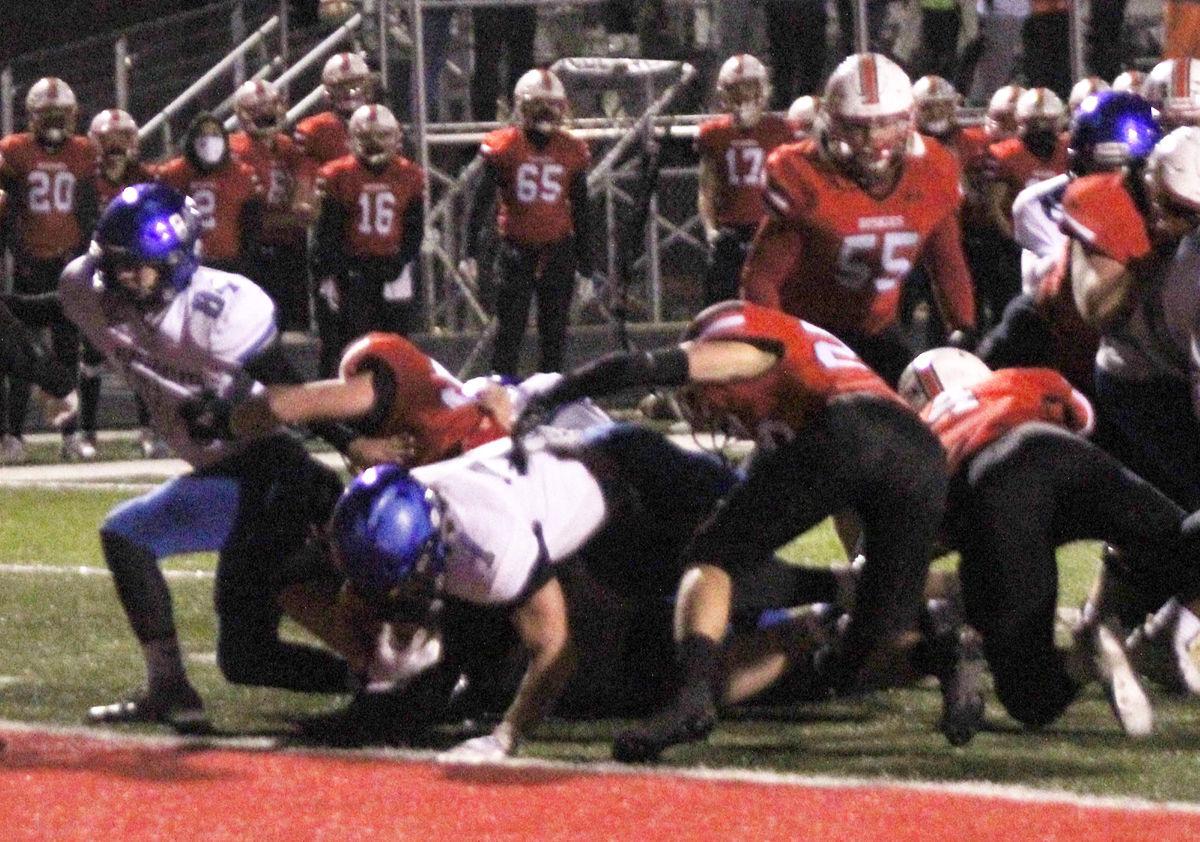 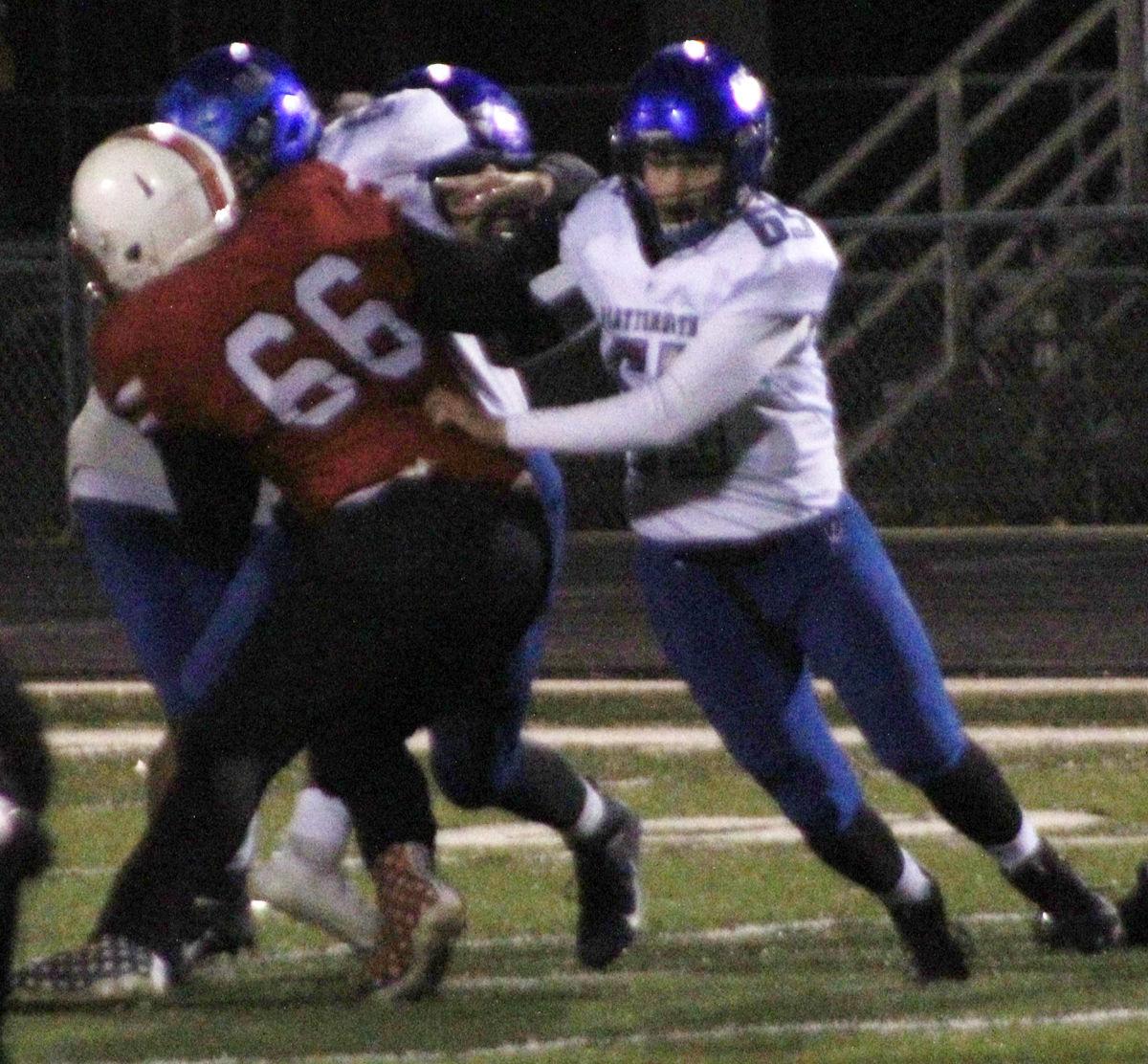 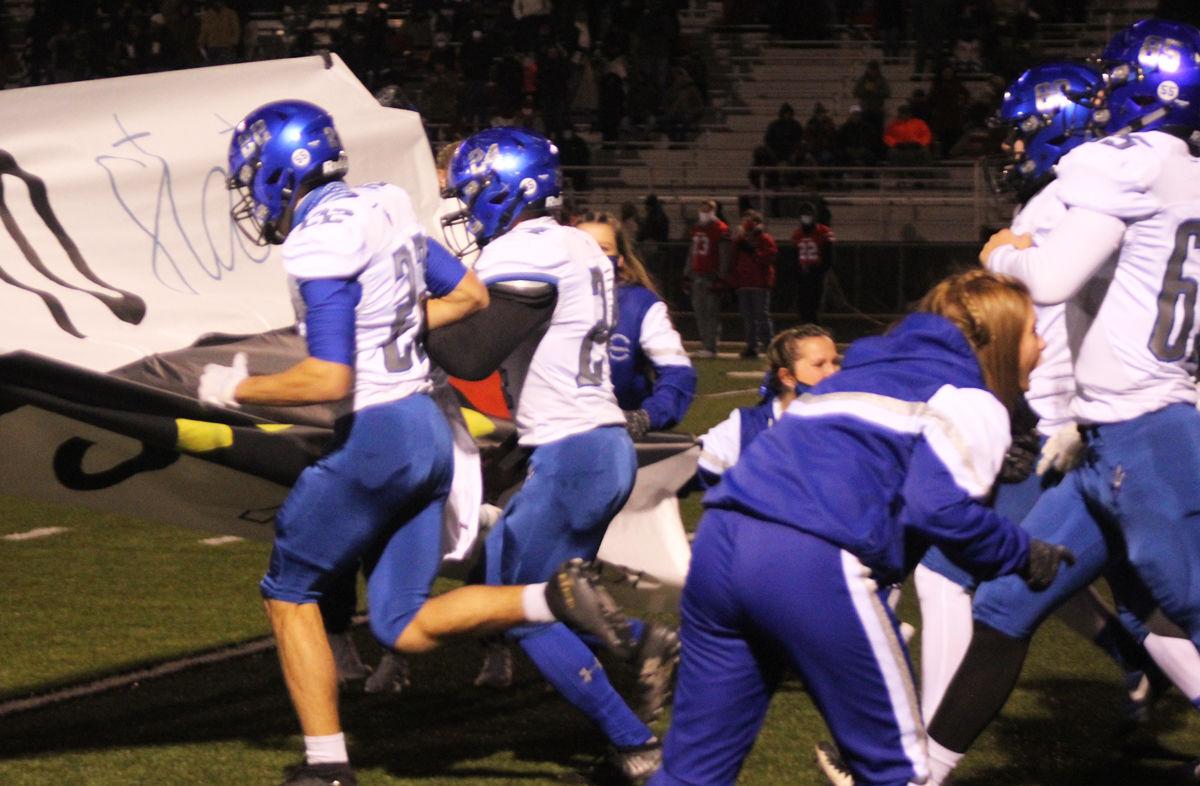 AURORA – Plattsmouth had secured tickets on a winning train in the Class B playoffs with a combination of strong offense and stout defense.

Aurora kept the Blue Devils from advancing along those same tracks Friday night with an identical approach on the football field.

Fifth-seeded Aurora stopped eighth-seeded Plattsmouth 21-12 in the Class B semifinals. The Huskies forced three turnovers in the first half and added a pair of interceptions in the fourth quarter. The team also used its speed on defense to plug up running lanes across the field.

PHS head coach Bob Dzuris said Aurora’s defensive abilities played a big factor in the outcome. The Huskies prevented Plattsmouth from establishing a firm foothold in the running department. Aurora became just the third team this year to hold Plattsmouth under 100 yards rushing in a game.

“We knew Aurora had a really good defense, and that made a huge difference in what we were able to do tonight,” Dzuris said. “We’re a team that relies on running the ball, and when you don’t get that big gain on first down, it really impacts how you approach the rest of the drive.

“When you get six or seven yards on first down, then it opens up the rest of the playbook. We weren’t able to do that consistently tonight, and that was the big key. Our game plan was to attack them with the run on a consistent basis, and they kept us from getting our running game going.”

Aurora (9-3) seized the game’s early momentum on the first drive. The Huskies started at the 41-yard line and marched downfield on a nine-play series. Senior quarterback Ethan Shaw put Aurora ahead with a ten-yard run up the middle.

AHS ended Plattsmouth’s next two possessions on fumble recoveries by Bryce Barger and Britton Kemling. The team capitalized on Kemling’s recovery with a touchdown drive. The Huskies moved to the 5-yard line and Jacob Settles hauled in a scoring pass from that spot.

Plattsmouth worked its way back into the game when Clyde Hinton recovered a fumble at Aurora’s 12-yard line late in the second quarter. Christian Meneses took off from the 3-yard line and dove through a hole to make it 14-6 with 3:20 left.

PHS short-circuited Aurora drives in the second half when Dalton Baumgart and Brayden Zaliauskas pounced on fumbles. PHS converted the second fumble recovery into points with 7:28 to play in the game. Adam Eggert outmaneuvered an Aurora defender in the end zone and caught a 28-yard pass from Jack Alexander. The two-point conversion play was unsuccessful to keep the score 14-12.

Dzuris said the Blue Devils were confident they could produce a repeat of their earlier postseason success stories. Plattsmouth pulled off a late rally to defeat McCook in the first round and overcame a halftime deficit against Bennington in the quarterfinals.

“Our kids never gave up,” Dzuris said. “I’m very proud of them for the way they kept competing tonight. There certainly were things that didn’t go our way during the course of the game, but they kept believing in themselves and working hard. That’s been a real trademark of our team this year.”

Plattsmouth gained a chance to get the football back after holding Aurora at the PHS 39-yard line. Shaw created a high level of difficulty for Plattsmouth with his punt on fourth down. The football rolled down to the 6-yard line with 4:21 to play.

The Huskies then clinched the game with their work on defense. A second-down pass bounced off the hands of a Plattsmouth receiver and went into the air. Aurora defender Brady Collingham caught the deflection and sprinted 22 yards into the end zone.

The team will travel to third-seeded Elkhorn on Friday, Nov. 20, for the title matchup. The coronavirus pandemic is preventing championship games from being held at Memorial Stadium in Lincoln this year.

Plattsmouth finished its season 8-3. The Blue Devils earned the program’s first postseason victory since 2015 and advanced to the Class B semifinals for the first time since 1979. Plattsmouth qualified for the playoffs for the 13th time in school history.

“I’m just really, really proud of them and excited about the way they competed the entire year,” Dzuris said. “Getting to the final four of the playoffs is something they’ll remember for a long time. I told them just now that there was no reason for them to hang their heads at all, because they did something that’s pretty special. Their hard work is what made this a great season.”

LINCOLN – Cass County students learned this week that they had earned state recognition for their time and commitment to school activities.

Wooten to run for Bruins in college

PLATTSMOUTH – Kaleb Wooten has been one of Plattsmouth’s top cross country runners throughout his four-year career with the Blue Devils.

TECUMSEH – Weeping Water athletes squared off against teams from across the southeast part of the state Tuesday at the Johnson County Central Invite.

PLATTSMOUTH – Plattsmouth baseball players will take their first swings in the Trailblazer Conference Tournament next week on their home diamond.

PLATTSMOUTH – The Plattsmouth girls finished their home triangular Saturday with winning smiles after securing a victory at Blue Devil Stadium.

CONESTOGA – The Conestoga boys used a team-first approach to take down Treynor on their home field Friday night.