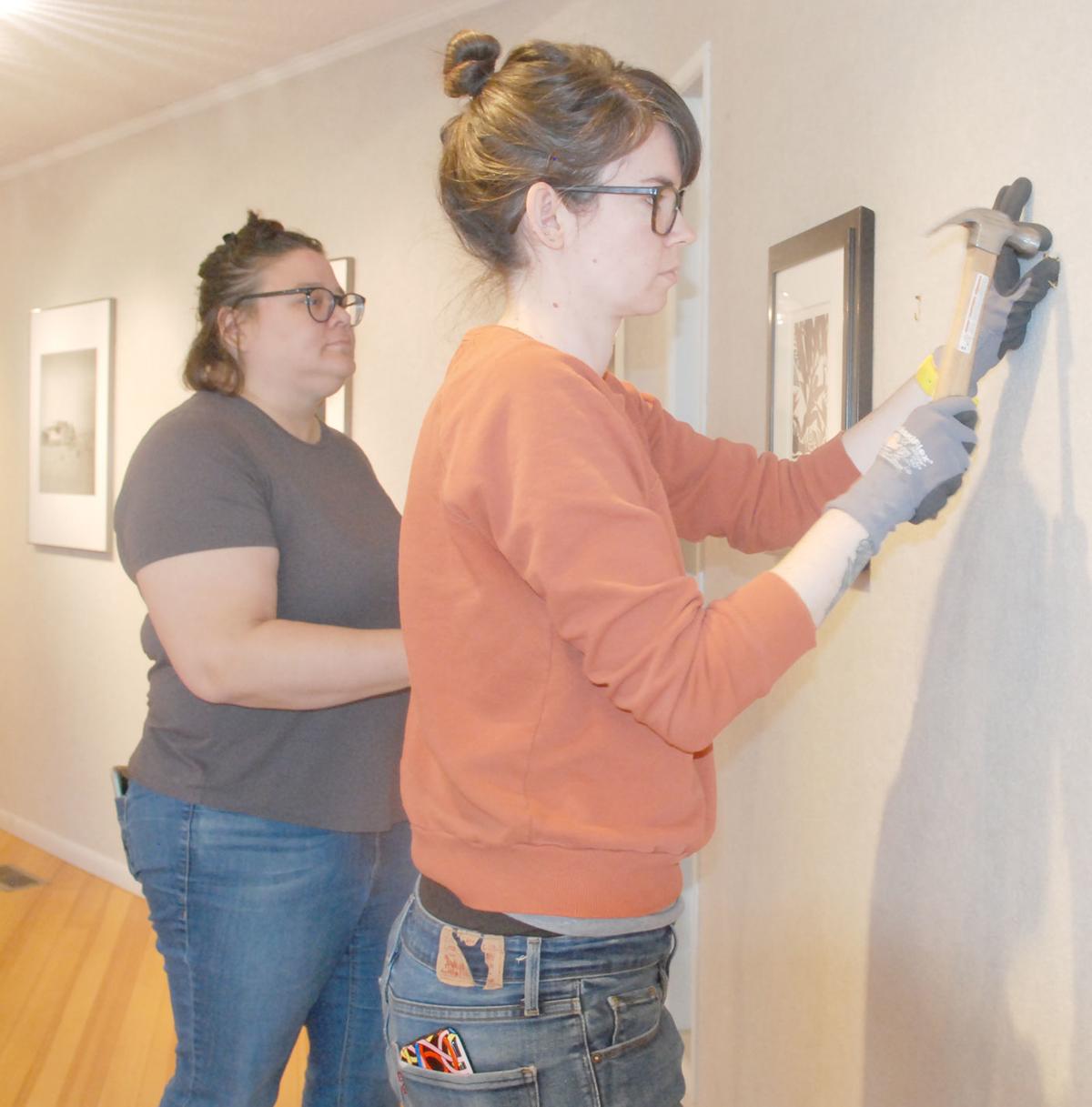 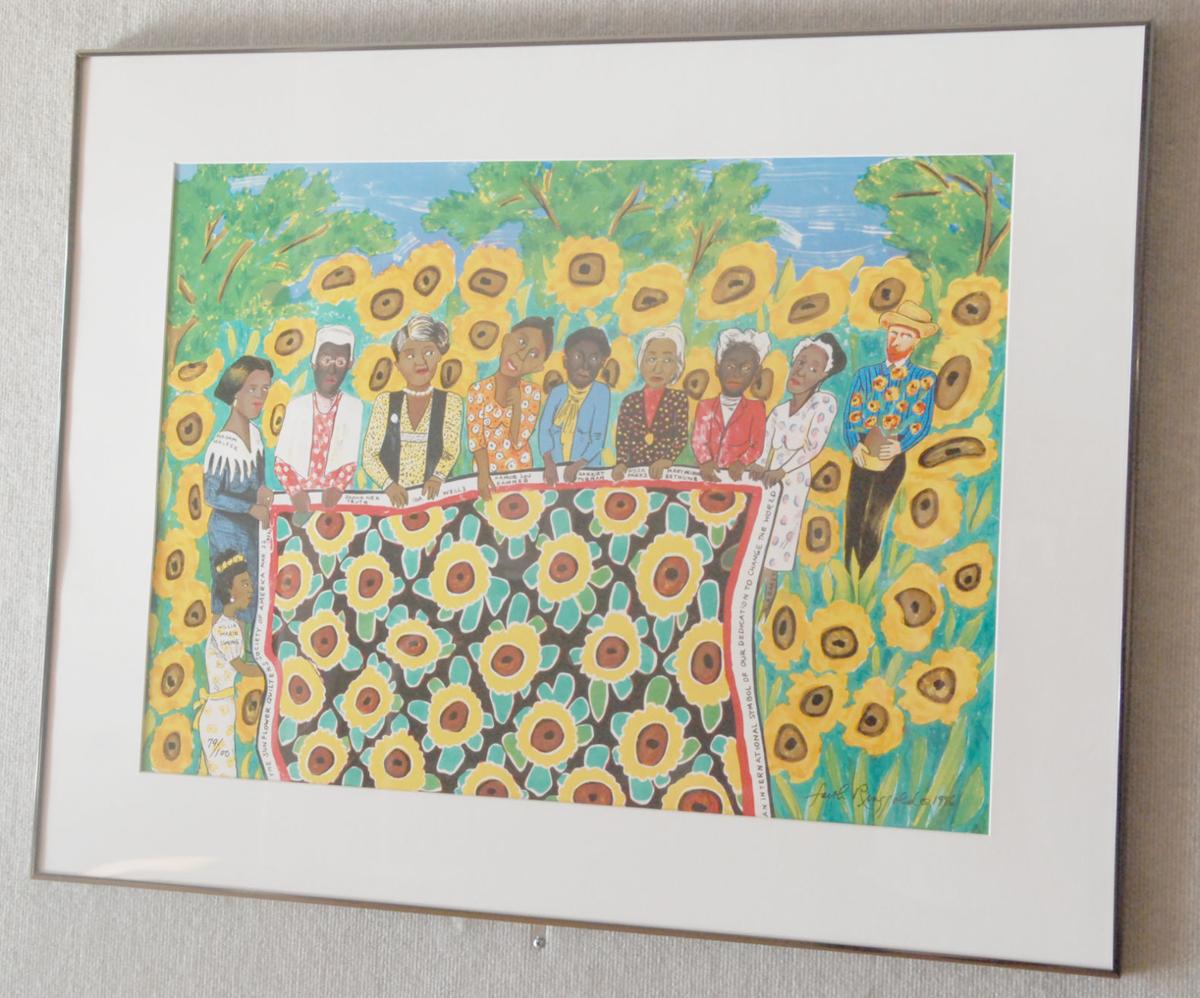 "The Sunflower Quilting Bee at Arles" by Faith Ringgold is on display at Gallery 92 West in downtown Fremont. It is part of "From Where I Stand," the 2019-2020 Sheldon Statewide exhibition. The public is invited to an artists' reception from 5-7 p.m. Friday at 92 W. Sixth St.

It’s called “The Sunflower Quilting Bee at Arles” and is part of the Sheldon Statewide Exhibition.

The show opens Wednesday with an artists’ reception set from 5-7 p.m. Friday in Gallery 92 West, downtown.

Hoden, an FAAA board member, said 17 paintings, prints and photographs are part of the display. All are selected artworks from the Sheldon Museum of Art at the University of Nebraska-Lincoln.

The exhibit, which features works by nationally and internationally known artists, will be on view through Feb. 3 in the FAAA building at 92 W. Sixth St.

Besides this exhibit, the FAAA is hosting a display of several selected works by Fremont Public Schools students in grades kindergarten through fourth.

Admission is free to the open-to-the public reception and also during regular gallery hours from 1-4 p.m. Tuesday-Sunday.

Ann Gradwohl, public relations and marketing manager for Sheldon, will serve as guest speaker during the reception.

Hoden said the purpose of the Sheldon exhibition is to bring quality art to communities in the entire state.

Since it started in 1987, the Sheldon program has taken exhibitions to 24 communities, reaching 360,000 people.

The FAAA has hosted the exhibit many times.

“Somebody may not travel to the Sheldon Museum of Art to look at their collection, but if it comes to Fremont, Nebraska, they may be likely to stop in at Gallery 92 West and see these incredible works of art,” Hoden said.

This show’s title is “From Where I Stand” and features work by 14 different artists, who explore the relationships people have with the places where they live and – in turn – how these environments influence their inhabitants.

One of the oldest works is a print made of a painting called “The Jolly Flatboatmen” by Thomas Doney and George Caleb Bingham in 1847. It depicts happy, clean-cut men dancing and relaxing as they travel down the Missouri River.

“The Sunflower Quilting Bee at Arles” by Faith Ringgold is set in the sunflower fields in France.

Information from the Sheldon states that the artwork alludes to the absence of people of color in the canon of European art.

The work depicts a group of African American women in the town where Vincent Van Gogh painted his famous sunflower canvases.

These women include Harriet Tubman, Rosa Parks and Sojourner Truth and surround a sunflower quilt with a bold pattern.

Van Gogh is shown with a bouquet of flowers and standing behind the women. The bouquet is in honor of the women’s accomplishments.

“I like to see what incredible artists have created and it brings me inspiration,” said Hoden, a retired registered nurse who is an artist.

She believes attendees will benefit from the exhibit.

“Art helps you make sense of your world and where you live,” Hoden said. “It makes you think. It’s enjoyable.”

Included in this exhibit is a sheet of questions that teachers can ask their students if they stop by the gallery or set up a tour. Parents also could get a sheet and ask their children some of the questions.

A few questions include:

“If this artwork is the start of a story, what might happen next?

“If this artwork is in the middle of the story, what might have happened before?

The sheet of educator resources also has ideas for teachers, who might have students write a poem or story about one of the people in the picture. The sheets, available in the Gallery, have several other suggestions.

Hoden is pleased that the exhibit is at the gallery.

“Sheldon Museum brings the artwork to our communities and Gallery 92 West is fortunate and very happy to host this event,” Hoden said. “It’s exciting that Fremont gets to see art of this caliber.”

There’s no need to hibernate this winter.

The Lied Center for Performing Arts in Lincoln is kicking off the new year with an eclectic mix of shows.

"The Sunflower Quilting Bee at Arles" by Faith Ringgold is on display at Gallery 92 West in downtown Fremont. It is part of "From Where I Stand," the 2019-2020 Sheldon Statewide exhibition. The public is invited to an artists' reception from 5-7 p.m. Friday at 92 W. Sixth St.