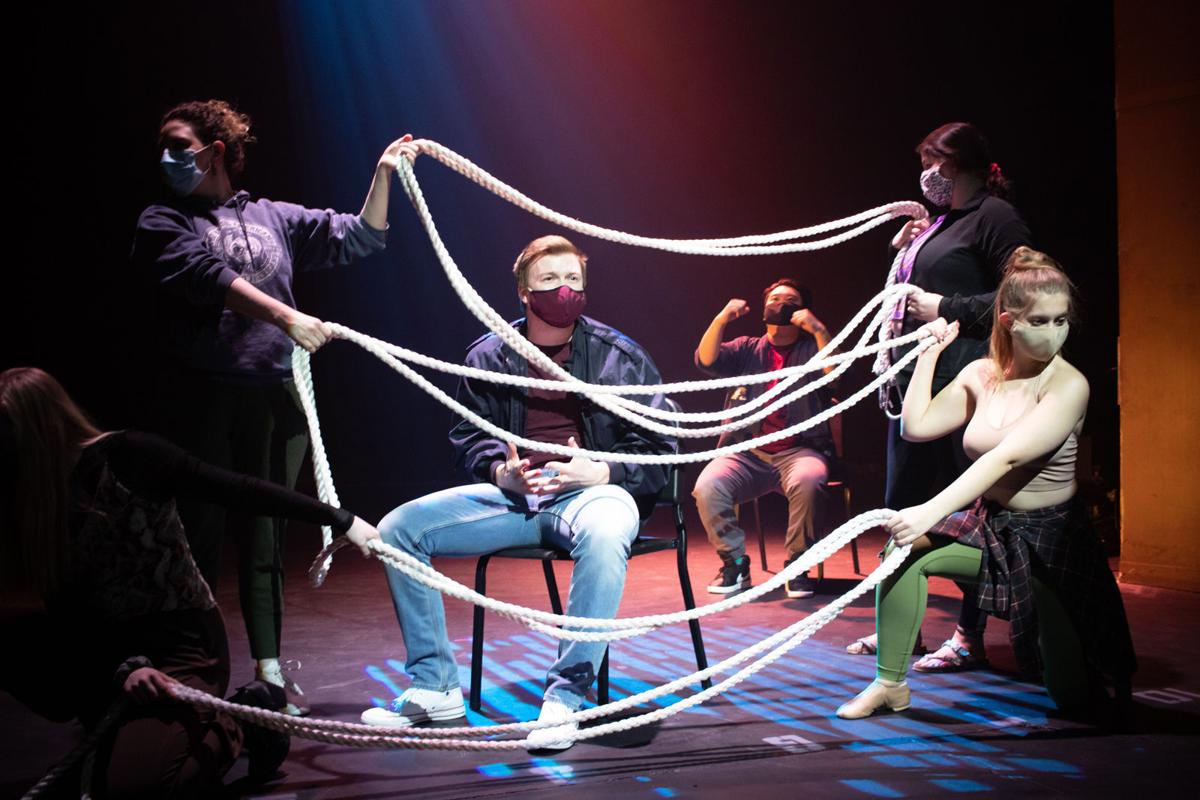 Midland University student Will Hastreiter is shown with other performers in rehearsals for the new production "Songs for a New World." The public is invited to in-person and Livestream performances of the university’s latest production, which start at 7:30 p.m. March 11-13 and at 2 p.m. March 14 in Kimmel Theatre on the Midland campus. 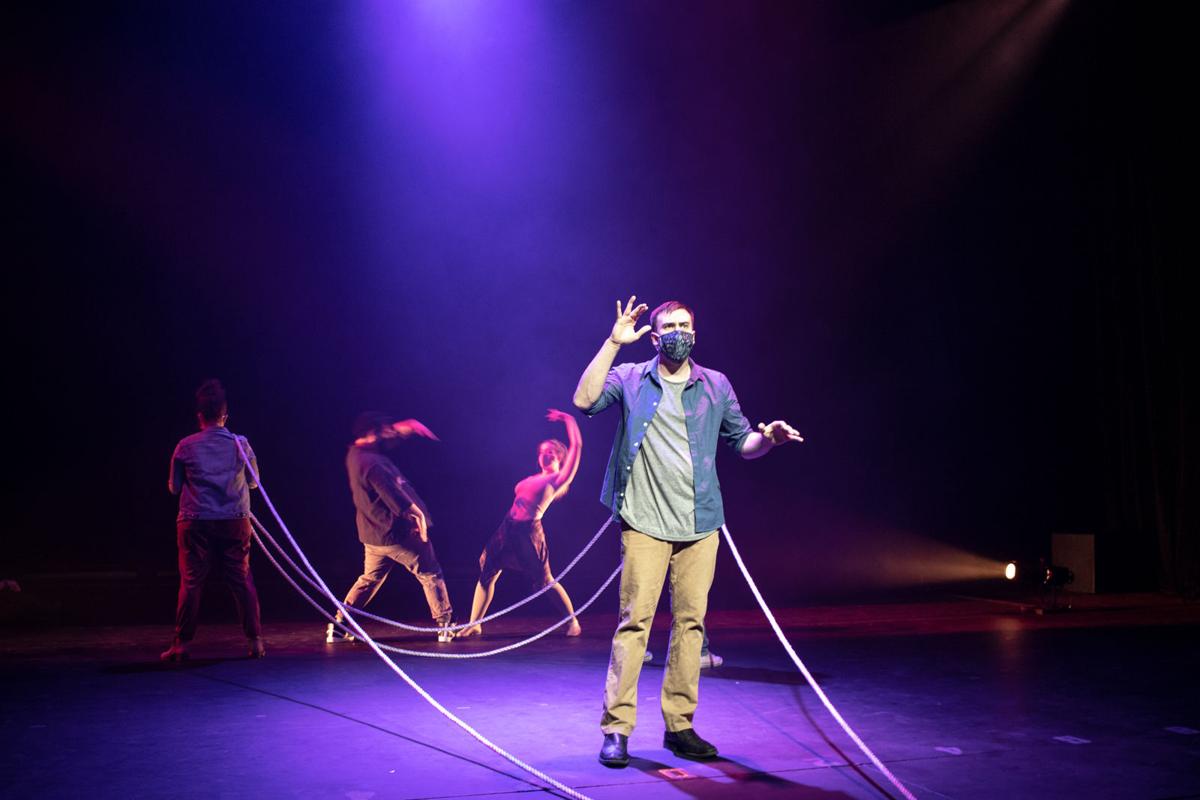 Midland students Sean Szetho, Madison Becker and Josh Dewberry perform during a rehearsal for the university's new production, "Songs for a New World." 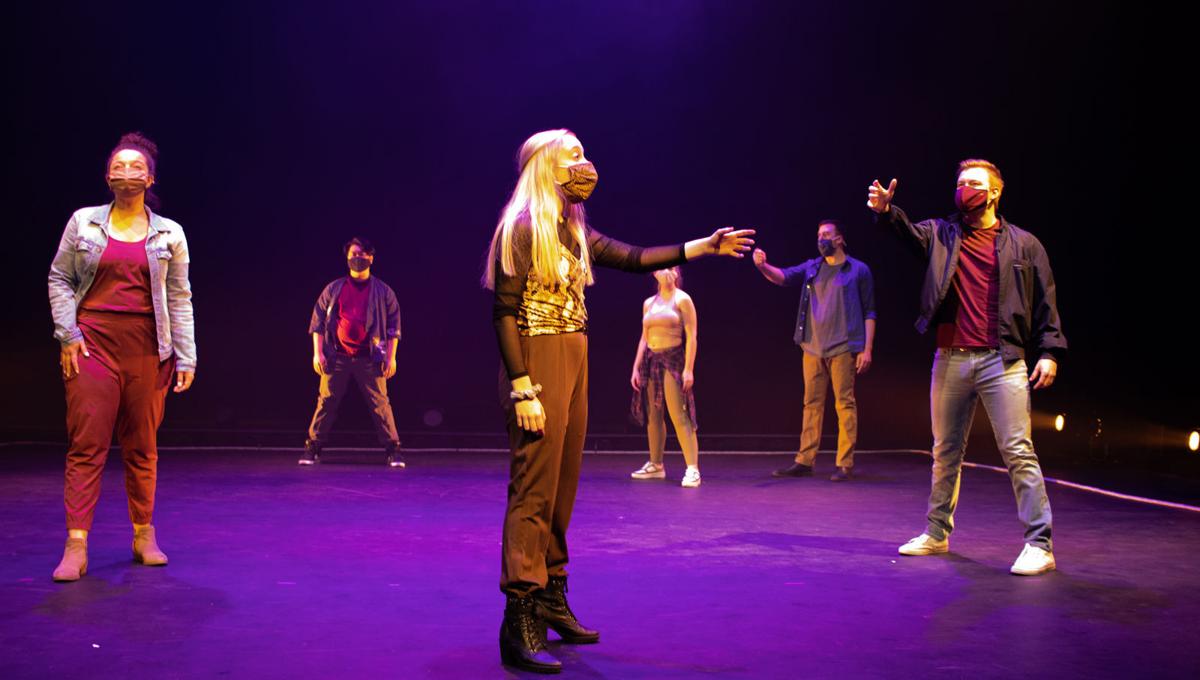 Monica Weber, left, Sean Szetho, Haley Bell, Madion Becker, Josh Dewberry and Will Hastreiter perform during a rehearsal for the Midland University production of "Songs for a New World."

Haley Bell really did fall for a new show at Midland University.

Bell is a vocalist in the university’s production of “Songs for a New World.”

During a rehearsal, Bell had a slight mishap when she walked offstage as the set went dark after a musical number.

“I went to get one of the chairs I needed to grab and completely fell on top of the light and ended on the floor,” she said.

Bell is OK and thinks the show is one audiences could fall for, too — albeit not physically.

The public is invited to in-person and livestream performances of the university’s latest production, which start at 7:30 p.m. March 11-13 and at 2 p.m. March 14 in Kimmel Theatre on the Midland campus.

Kyle Thomas, assistant director for performing arts, directs the cast of eight performers in a show that’s a little different from a typical musical.

Unlike a traditional musical with a continuous plot, this show has a series of songs, which each feature a different character and story.

The characters are at the edge of a decision or a turning point in life.

Thomas said the show’s composer, Jason Robert Brown, is a contemporary writer in the forefront of current musical theater.

Besides being a contemporary musical, Thomas said the show was selected, in part, because it has a challenging score to sing.

“We wanted that educational opportunity for our students,” Thomas said.

Thomas added that it’s also challenging, because the show originally was written for four singers.

“But in our production, we are adding four dancers so each singer kind of has a shadow dancer and the entire piece is choreographed by one of our students,” he said.

Madison Becker, an arts management major from Elkhorn, is enjoying her role as a dancer.

“I like that I can become so many different characters from back-to-back numbers,” she said. “I can play a toxic girlfriend in one and in another one I’m like an angel. I can be so many different people within five minutes of each other.”

Becker said she’s had fun portraying “the mean girl” — someone so different from her own personality.

Bell is a freshman and a secondary education major from Blue Springs, Missouri.

Like Becker, she has the opportunity to portray a variety of characters. She sings “Just One Step,” a comedic number about a woman who expects her rich husband to give her everything she wants.

During the song, “Stars & The Moon,” Bell portrays another woman who comes to realize that money doesn’t buy happiness.

For the song, “Flagmaker of 1775,” Bell portrays a woman who tries to distract herself by making flags during a war that her husband and son have gone off to fight.

Bell appreciates what she’s learned from the show.

“It’s taught me to become a very disciplined performer,” she said.

Previously, Bell was a student at Leavenworth High School in Kansas, which staged large shows with lots of set pieces.

“There’s a lot to look at,” Bell said of those shows.

In contrast, this show has minimal set pieces and the focus is on the performers.

Bell and Becker believe audience members will benefit from the show.

“This is an experience people can not only enjoy, but relate to,” Becker said. “It’s not a fantasy show or a dream show. It’s real life with real people.”

Becker noted something else.

“With the pandemic, human interaction is lacking,” Becker said. “And to be able to see people show raw emotion in all different forms is refreshing. It’s giving people the emotional connection they are seeking.”

“There’s not many places you can really go during this pandemic, so it’s always nice to find safe opportunities to get outside and maybe discover something you’ve never seen before,” Bell said. “Since many people have not either heard of this show or seen it, they can really benefit by experiencing something new and getting to connect with people. Even if it’s not in-person, they can connect with some of the stories.”

As for the spill she took during rehearsals, Bell said extra precautions are being put into place.

“We’re going to put some glow-in-the-dark tape around them (the lights) for my sake,” she said.

And in a light-hearted fashion, she added: “It’s a show worth falling for.”

Tickets for in-person shows are $15 for adults and $12 for seniors and students; in-person attendees will be required to wear a mask. Tickets for livestream performances are $15.

The tickets can be purchased at www.midland.edu/tickets or by calling the box office at 402-941-6399 between 2-5 p.m. Monday-Friday. Tickets need to be paid for at the time of reservation and at least one day ahead of the performance. More information is available on the website.

Mickey Boell is looking for a punchline.

Fast action by Scribner’s city leaders took the chill off what could have been overwhelming bills for residents.

Tim Karges is seeing the need.

Even if she didn’t frequent Scooter’s Coffee herself, Sherry Leriger said she knew she wanted to use it to brighten people’s days during the p…

Midland University has completed a five-year, $50 million campaign aimed at providing an opportunity for continued investments in the universi…

Fremont High School returns to the stage with new musical

A year after their annual spring musical was put on hold due to the COVID-19 pandemic, students in Fremont High School’s musical program are r…

Fremont Public Schools could receive up to $3 million from the second round of federal COVID-19 relief funds later this spring.

Calendar of events for March 9-11

Find out more about area events and meetings planned for March 9-11.

The first case of a faster-spreading variant of COVID-19 has been confirmed in Dodge County, Three Rivers Public Health Department said in a p…

There are many wonderful places in the world, but one of my favorite places is on the back of my horse. — Author Rolf Kopfle

Get ready for hot rods, home-improvement ideas, music and theater this weekend.

Two area students will compete for a $10,000 scholarship

With a $10,000 scholarship on the line, two area students will be among 20 students in the University of Nebraska-Lincoln’s College of Journal…

A new project is springing up for Johnson Park.

Midland University student Will Hastreiter is shown with other performers in rehearsals for the new production "Songs for a New World." The public is invited to in-person and Livestream performances of the university’s latest production, which start at 7:30 p.m. March 11-13 and at 2 p.m. March 14 in Kimmel Theatre on the Midland campus.

Midland students Sean Szetho, Madison Becker and Josh Dewberry perform during a rehearsal for the university's new production, "Songs for a New World."

Monica Weber, left, Sean Szetho, Haley Bell, Madion Becker, Josh Dewberry and Will Hastreiter perform during a rehearsal for the Midland University production of "Songs for a New World."