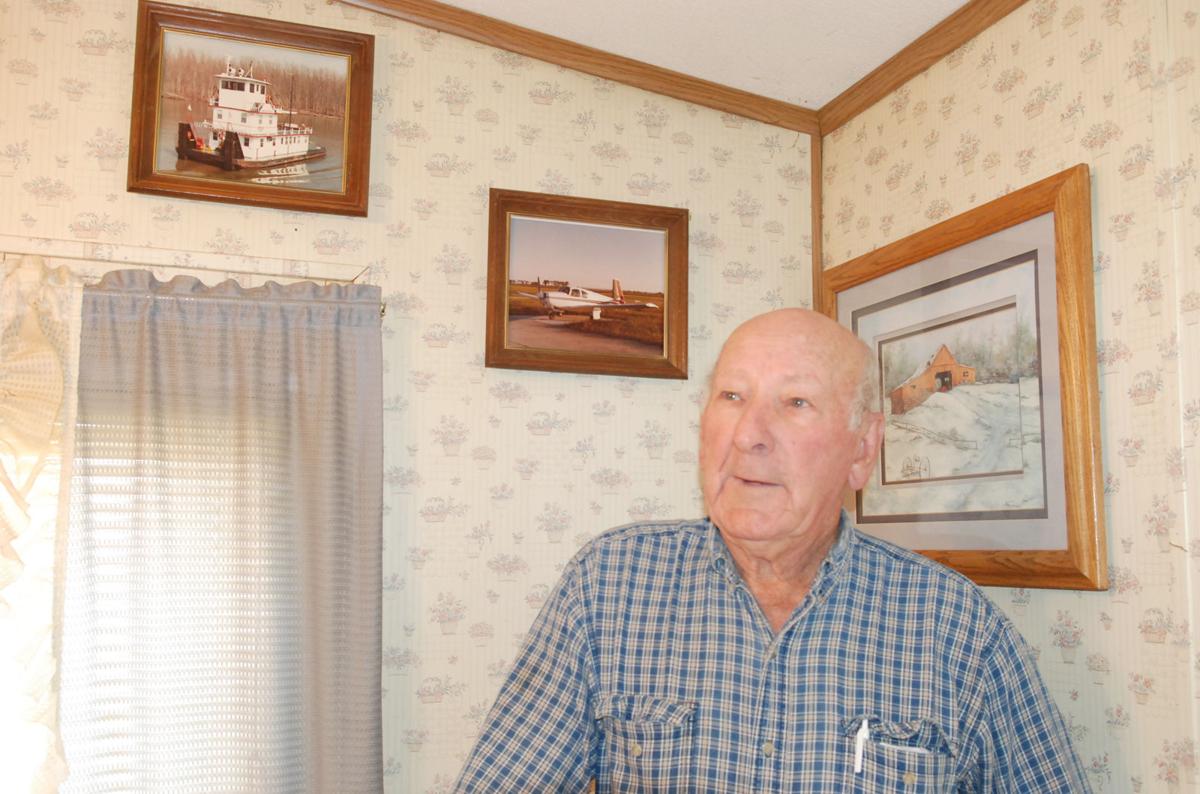 Fredrick “Charlie” Schmidt stands in his kitchen, recalling his days as a tow boat captain and trip pilot. It was during those times that he began writing poetry. 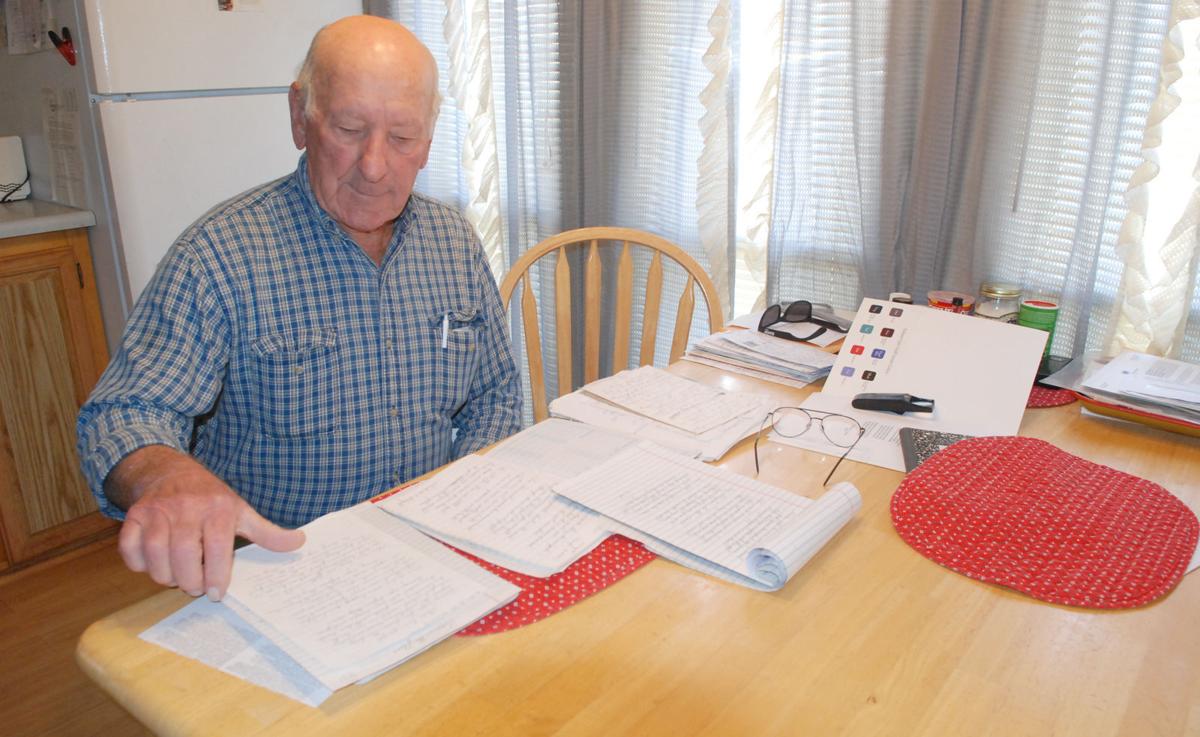 Fredrick Schmidt, formerly of Tekamah, reaches for a piece of paper on which he's written one of his poems. The former tow boat captain figures he's written 200 poems. 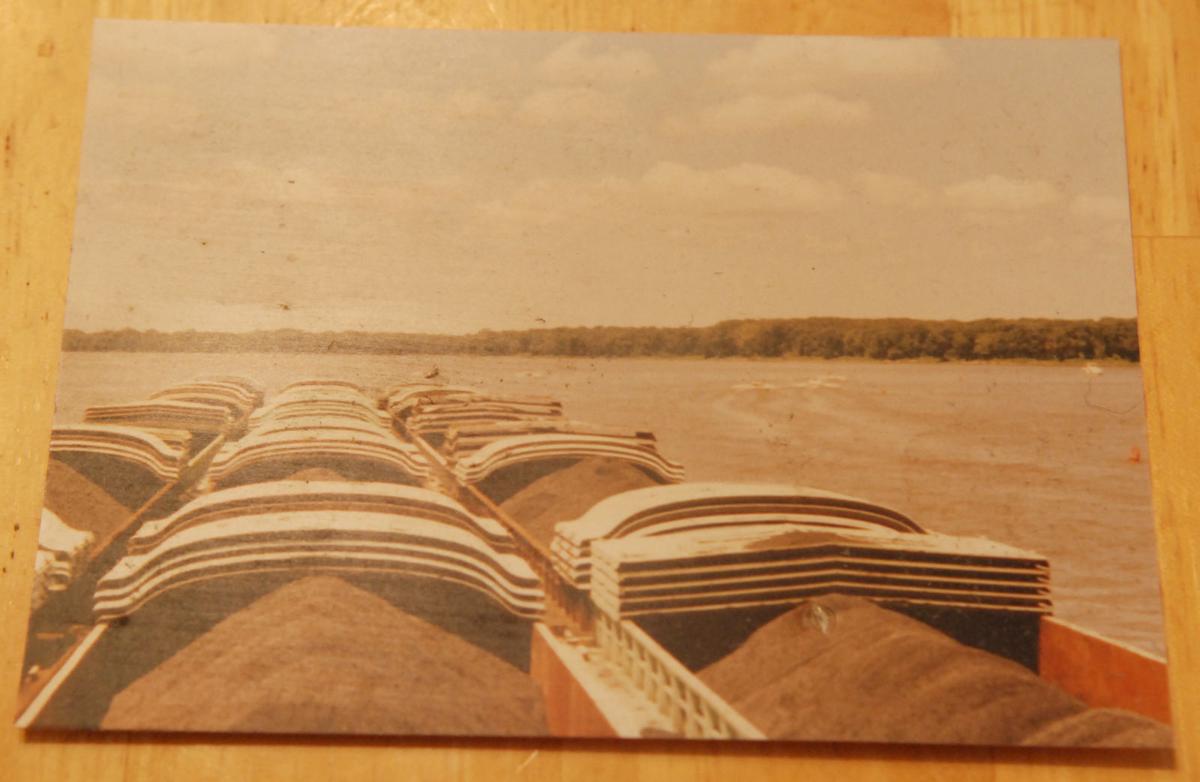 This is a photograph of the some hopper barges that Fredrick Schmidt, now of Oakland, took years ago. The hoppers are filled with coal. 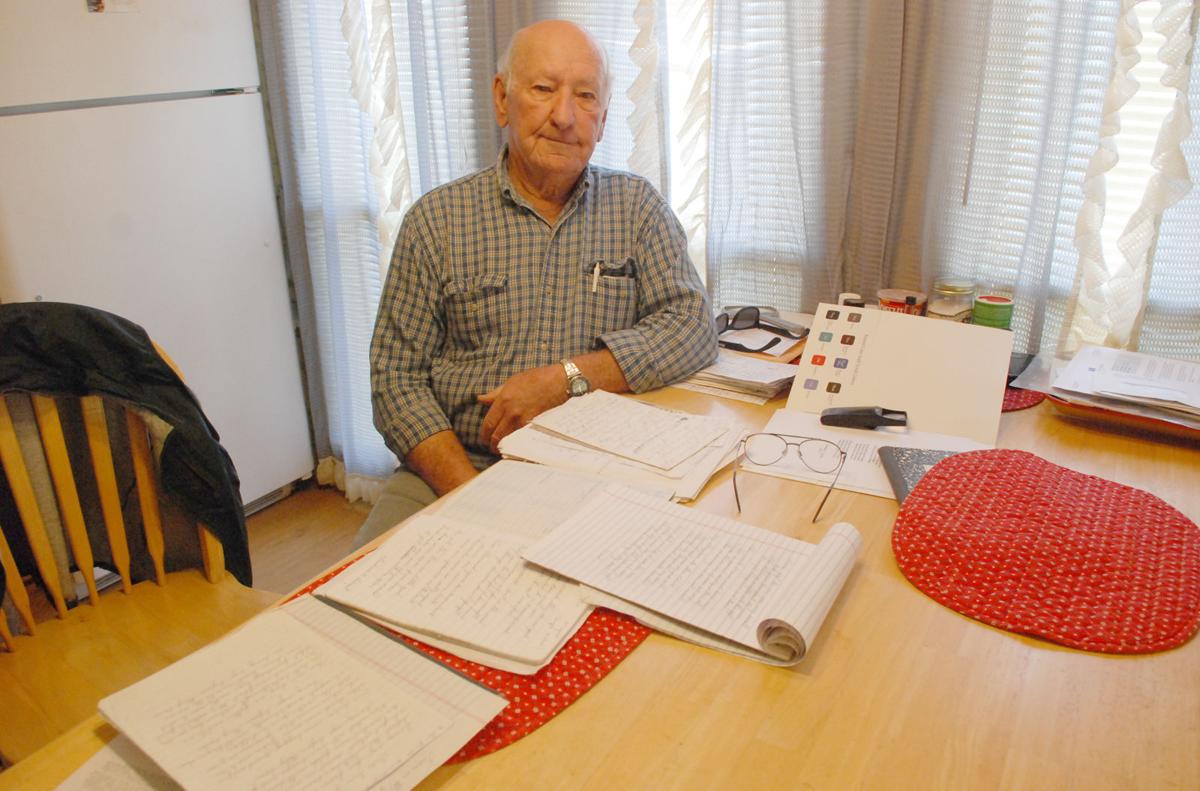 Fredrick Schmidt, formerly of Tekamah, sits near the tablets and pieces of paper on which he's written his poems. The former tow boat captain figures he's written 200 poems. 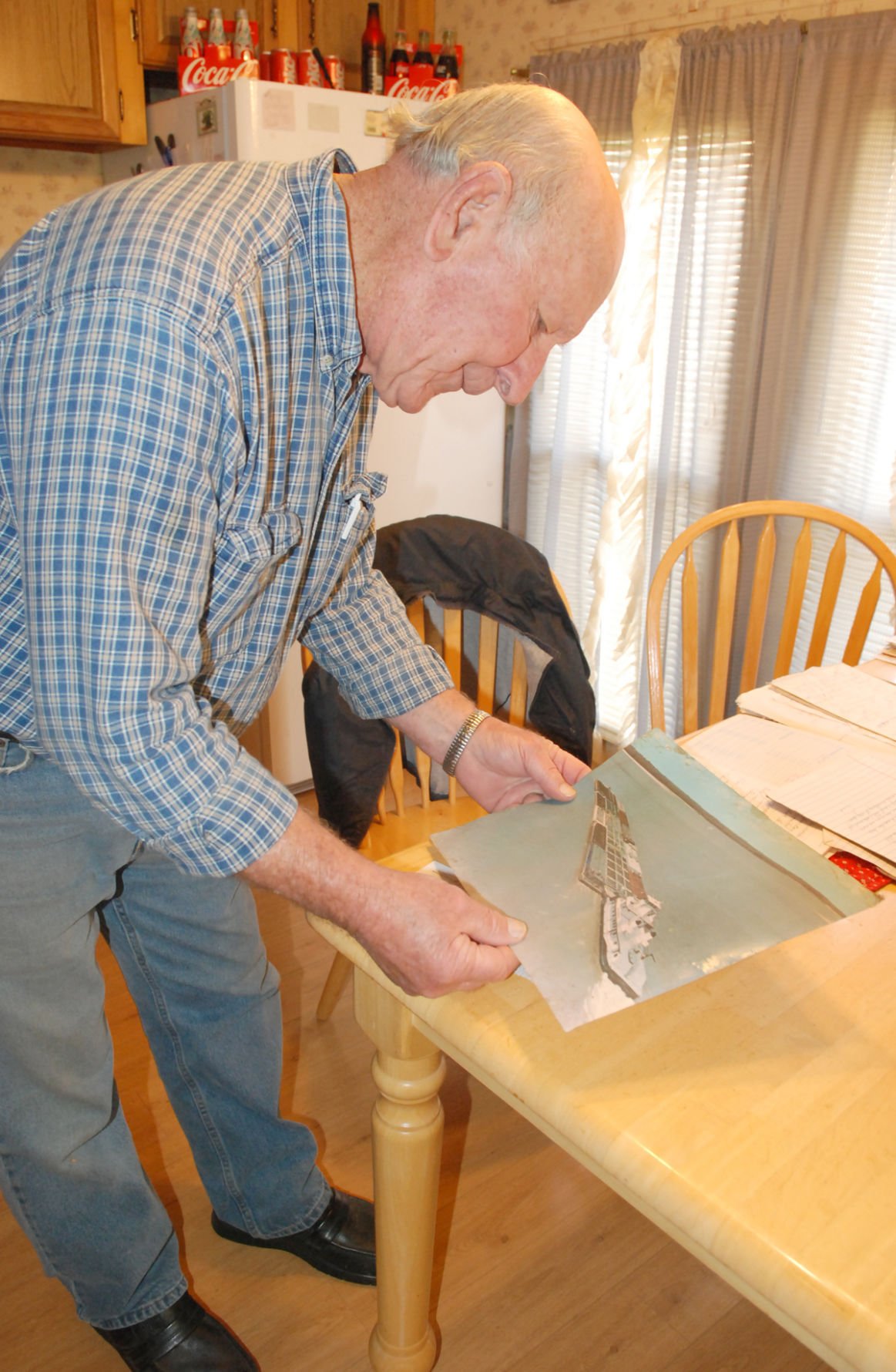 Fredrick Schmidt looks at a photograph of a tow boat and barges. For years, he was a tow boat captain and then a trip pilot. During those years, he began writing poetry.

Years ago, Fredrick Schmidt faced a perfect storm of sorts.

Schmidt was a trip pilot on a tow boat on the Mississippi River when the squall erupted. High winds of 70 to 80 mph beat against the boat and 15 empty hopper barges. Debris flew through the air.

When the captain of a tow boat fled his post, Schmidt had to take control of the big vessel.

“The wind was blowing so hard from the west and I had to turn into it about 70 degrees,” said Schmidt, who lives in Oakland. “We were almost sideways in the river with the wind on the west side and the current on the north side.”

There were other dangers, including the possibility of boats coming from the opposite direction.

Late last week, Schmidt sat in his kitchen, quietly pondering that storm. It would be just one of several storms he faced during his years as a tug and tow boat operator.

Yet it was during one storm, that Schmidt wrote his first poem. That poem would lead to others. Today, the retired tow boat captain figures he’s written 200 poems and has started many others. Hand-written in notebooks, the poems deal with various topics. Some are spiritual. Others deal with life situations.

All are drawn from the musings of a man who came to know two great waterways very well.

Schmidt, known as “Charlie,” said he was born in a one-bedroom farmhouse in rural Tekamah. His father, Allen, was a commercial fisherman, trapper and guide, who took dignitaries from Omaha on hunting trips.

One of five children, Schmidt was on a fishing trip with his dad when he noticed some Corps of Engineers tug boats on the Missouri River. The corps was stabilizing the river with rocks.

Schmidt was only about 10 years old at the time, but decided then that he wanted to do that type of work.

He was 16 when he got a motorboat operator’s license to legally operate a tug boat on any river.

Schmidt graduated in 1953 and about three years later got a job with Cunningham Kiewit. They were river contractors, running tug boats on the Missouri River, he said.

He would work for different companies, towing barges of rock for building dikes or stabilizing river banks. From 1956 to 1973, he was involved in construction.

Then he went on to line-haul tow boats. He worked for Sioux City New Orleans, towing barges hauling various commodities from molasses to steel to newsprint.

Most of the year, he was on the Missouri River. But in the winter, he worked on all the tributaries of the Mississippi, even out to the Gulf of Mexico.

The job wasn’t too easy. He remembers trying to get a tow boat and six barges in between two piers that were about 130 feet across at most. It wasn’t so simple when the six-barge tow was normally 70 feet wide and 600 feet long.

“It was like trying to thread a needle,” he said. “Upstream was no problem, because you were going 5 miles per hour against the current. Downstream, sometimes was a problem because of the currents and the wind.”

Schmidt faced other situations. One night, he was a relief captain of a boat on the Missouri River about 10 miles north of Kansas City.

That night, lightning hit a huge cottonwood tree, stripping off bark and sending it flying. The bark hit the boat, breaking out some of its windows.

“The deck hands came running up,” he said. “They didn’t know what it was.”

Experience proved useful in Schmidt’s line of work, along with tools such as radar and good search lights.

“When you’re the pilot, you work from midnight to 6 a.m.,” he said. “You come up when it’s pitch black and you’re at a disadvantage. The older and more experienced you are — you get used to it and you know where you’re at — even if it’s pitch black.”

He notes something else: “If you’re out there 30 years, it’s like your backyard. You know every bend and you know whether to back up or slow down.”

He does recall the time he sort of scared a railroad bridge tender. Schmidt was on the Missouri River when he got a call from the bridge tender. The man had looked out of a window and spotted the boat.

“Where’s your lights?” the man asked.

“I don’t need them,” Schmidt said, add that the vessel was still a mile or more away and the tender had time to open the bridge.

Years later, the bridge tender became a cook on Schmidt’s boat. The man retold the story, adding that he wondered just who was coming down that river.

Schmidt eventually became a trip pilot where, again, his experience would serve him well.

He had come on watch at noon. The tow boat and barges were upstream from the Jefferson barracks bridge, which spans the Mississippi River, at St. Louis.

The boat began feeling the effects of a terrible windstorm.

Some would say it wasn’t actually a tornado, but the 70 to 80-mph winds were blowing boards, roofing, dirt and tree limbs across the river.

The captain ran down the stairs.

“I had to take control of the situation,” Schmidt said.

Turning the boat into the wind meant it was almost sideways in the river.

There were various dangers, including anchor fleets, which had barges connected to them.

“If we’d broken them loose, there would probably have been 100 barges floating down the river and a lot of them would have sunk if they’d hit the piers,” he said.

Schmidt had to keep control of the tow boat and the barges for 20 to 30 minutes.

“It seemed like forever,” he said. “We lucked out, because there was no southbound traffic. If there had been, we would have been crossways in the river and they would have hit us.”

Yet it was during another storm — one with lightning — that he wrote his first poem.

He steered the boat and wrote a poem about the storm, which he compared to life, for his children, Steve and Laura.

That was in the early 1970s. After that, when he was sad and really missing his children, he’d write a poem.

He’d write poems in a tablet or even on a scrap of paper. They’d fill moments of boredom or the blues.

“Sometimes, I just have a thought and I almost feel compelled to sit down and write a poem or a story or a song,” he said. “I feel like if I don’t, something is going to be lost. It’s something given to me.

“I don’t even consider myself a poet, but if somebody can enjoy it, I want to write it. I want to share it with other people.”

Schmidt said he read one of his religious poems to a woman at the Dairy Queen in Tekamah. He said she got tears in her eyes.

He’s sometimes been amazed by the people who have said they enjoyed his poems — like a tough, old farmer.

“It surprises me who likes them,” he said. “It catches me off guard.

He adds something else: “I don’t write them for myself. If people like them, I’ll continue.”

One of his poems, untitled, is:

“The sun comes up

The sun goes down

As God planned this to be

Then sacrificed his only son

To set us sinners free

Through his love this world will turn

And when our life on earth is done

His kingdom we shall see

Eternal life awaits us there

No lost or blind will be

Another poem from the tow boat captain:

“What are the greatest things in life?

So strange that some don’t know

Others may argue with this but

My choices are below

With love that never ends

Let’s add a smile, a kiss, a tender word

Spoken from the heart

Should also be a part

Heaven forbid we lose these things

To understand their worth

The greatest of God’s graces

Put upon the earth.”

Fredrick “Charlie” Schmidt stands in his kitchen, recalling his days as a tow boat captain and trip pilot. It was during those times that he began writing poetry.

Fredrick Schmidt, formerly of Tekamah, reaches for a piece of paper on which he's written one of his poems. The former tow boat captain figures he's written 200 poems.

This is a photograph of the some hopper barges that Fredrick Schmidt, now of Oakland, took years ago. The hoppers are filled with coal.

Fredrick Schmidt, formerly of Tekamah, sits near the tablets and pieces of paper on which he's written his poems. The former tow boat captain figures he's written 200 poems.

Fredrick Schmidt looks at a photograph of a tow boat and barges. For years, he was a tow boat captain and then a trip pilot. During those years, he began writing poetry.