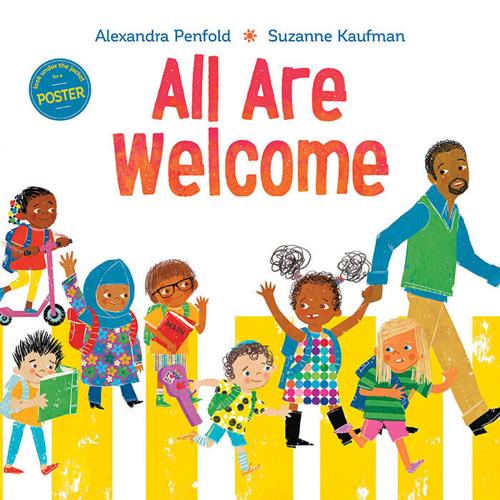 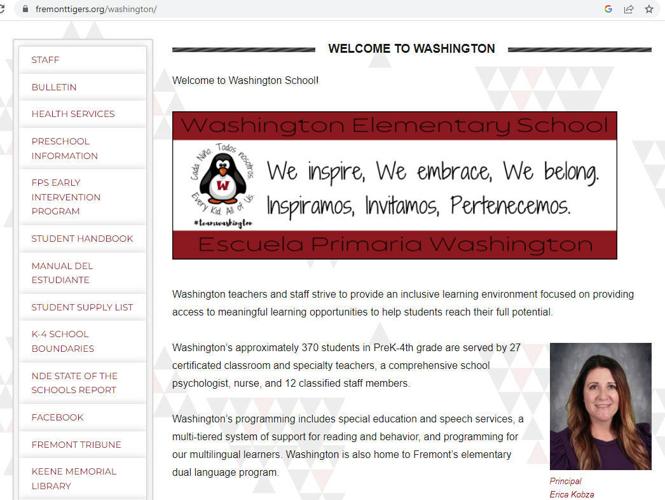 This screenshot is the webpage for FPS Washington Elementary School, led by principal Erica Kobza. The site has multiple welcoming messages expressing the school's philosophy of welcoming and accepting diverse families, students and people.

The book, titled “All are Welcome,” was purchased under a federal program by Washington Elementary School principal Erica Kobza and, according to FPS Superintendent Mark Shepard, was distributed to students at the school with the goal of, “promoting family literacy.”

Shepard explained the details of the incident and how the book arrived at Washington Elementary School in a lengthy email following a public records request made by the Fremont Tribune in response to an anonymous tip from a local resident.

In an email to the Tribune on Jan. 23, Shepard said the book was purchased under the Federal Department of Education’s Title I, Part A: Parent and Family Engagement, section of the Elementary and Secondary Education Act (ESEA).

“All are Welcome” is a 2018 illustrated book about diverse families written by New York-based author Alexandra Penfold. She also authored the books, “Eat, Sleep, Poop,” and “We are Brothers, We are Friends,” and is a New York Times best-selling children’s books author.

According to a description of the book on Amazon.com, “All are Welcome” is intended for child readers ages 2 to 6 years old and is classified as a, “children’s book on prejudice and racism.” The book depicts diverse families of various racial, ethnic and religious identities as well as families with disabilities. One section features a same-sex parent unit with a child.

In an anonymous letter mailed to the Fremont Tribune, a person who identified themselves as a “Concerned Tax Payer,” alleged Kobza improperly used federal funds to purchase the book for students without approval nor knowledge of district administrators nor the FPS Board of Education. In the letter, the tipster described the book as “promoting homosexuality.”

Shepard said the book was purchased from, “First Book, a 501c3 non-profit, whose mission is ‘Building a path out of poverty through educational equity.’” On the non-profit’s website, the organization describes its mission as: “Our purpose is as bold as it is urgent. To create systemic change. To ensure equal access to quality education. To empower every educator and all the children in need who they serve.”

“Ms. Kobza has stated that her intent was to continue to create an inclusive environment at Washington and to further celebrate the diversity of the students and families present in the school. I received emails and met with parents from two families on the matter,” Shepard stated in an email. “Based on our search of Ms. Kobza’s email, only one parent expressed a concern directly to her related to the book.”

Shepard said contrary to rumors about this book’s use, there were not “scores” of complaints from the public about the book. Following the complaints from three sets of parents and one school district teacher, the district stopped distribution of the book, he added.

“Ms. Kobza agreed to pull back any remaining copies of the book which were present in the building. A copy of the book was presented this fall to parents during back to school night by a teacher who was not employed at Washington (Elementary School) last year and was also pulled back the next day,” Shepard stated in the email. “In both situations, the book was not removed for content but rather for the potential of creating a disruption to the educational process.”

Shepard also said the book was not used in any other Fremont Public Schools locations and its purchase was approved by the district’s director of professional learning and federal programs. Use of the book stopped, he added.

According to assorted descriptions of the ESEA online, the section of federal law is intended to provide, “Information related to implementation of programs, activities, and procedures for the engagement of parents and family members of Title I students.

“Title I, Part A, of the Elementary and Secondary Education Act (ESEA) requires that local educational agencies (LEAs), conduct outreach to all parents and family members and implement programs, activities, and procedures for the involvement of parents and family members,” a California Department of Education explanation states. “Such programs, activities, and procedures shall be planned and implemented with meaningful consultation with parents of participating children.”

In a Virginia Commonwealth University report on the ESEA by researcher Catherine Paul, part of the university’s Social Welfare History Project, the act was a centerpiece of President Lyndon B. Johnson’s social justice and welfare platform.

“The Elementary and Secondary Education Act (ESEA) was a cornerstone of President Lyndon B. Johnson’s ‘War on Poverty.’ This law brought education into the forefront of the national assault on poverty and represented a landmark commitment to equal access to quality education,” Paul wrote. “As mandated in the act, funds are authorized for professional development, instructional materials and resources to support educational programs, and the promotion of parental involvement.”

The controversy over the “All are Welcome ” book in Fremont Public Schools occurred before the current debate and disputed availability of the book, “Sex is a Funny Word” in the City of Fremont’s Keene Memorial Library.

The Keene Memorial Library is not affiliated with the Fremont Public Schools in any manner, and is owned and managed by the City of Fremont. There, the presence of “Sex is a Funny Word” has been officially contested by a local grandmother and downtown business owner, Sandra Murray.

Murray first complained about five books during a Dec. 27 meeting of the Fremont City Council, four of which were titles dealing with LGBT issues and themes. Murray has since filed an official complaint to have “Sex is a Funny Word” fully removed from the library. The decision on that complaint has been made, but is not public yet.

In response to Murray’s complaints, library officials on Dec. 28 relocated seven common youth sexual education books from the children’s section of the library to the adult section, where they must be checked out by an adult in order to be seen by a minor age 17 or younger.

Nate Grasz, policy director for the Nebraska Family Alliance, said while he is not familiar with specific complaints against the use of “All are Welcome” in Fremont Public Schools, the use of books with topics the organization feels should be left to parents is a large issue in Nebraska, nationally, and in schools and libraries.

“Our viewpoint is parents are the primary educator of their children. Schools and libraries should be working together with parents,” Grasz said. “We’ve continued to hear from concern parents in Fremont, and from across Nebraska. It is a big issue.”

Abbi Swatsworth, executive director of Out Nebraska, a statewide LGBTQ+ advocacy organization, said she is not familiar with “All are Welcome,” but after some research on the book, believes it is an appropriate educational book for young children that teaches respect and acknowledgement of diversity.

“We talk about being respectful and not causing harm, and one of the tenets of respect is acknowledging a group exists,” Swatsworth said. “Limiting exposure to a book as innocuous as this, which is dealing with diversity beyond just LGBT, is disappointing. LGBT families exist all across (Nebraska).”

Shepard said he and other district officials listen, and respond accordingly, to parental input and feedback on books and curriculum.

“Our district prides itself on being transparent in everything we do. We have an open book policy when it comes to curriculum, budget, taxes and policies/procedures,” he said in an email. “We work closely with parents whenever there are situations that are brought to our attention. The public’s trust is hard to earn and easily lost.

“We take our responsibility of caring for all students very seriously and never want a parent’s voice to go unheard. Part of this responsibility is ensuring the age appropriateness of materials and having an environment where all students feel safe in every situation. We repeatedly message that if someone feels otherwise they need to share their concern with an adult so we can address the issue appropriately.”

Parent complaints about 'All are Welcome' began in March 2022

In response to a public records request by the Fremont Tribune, officials at the Fremont Public Schools (FPS) on Monday, Jan. 23, released a s…

Fremont-area calendar of events for Jan. 26-28

Take a look at the meetings and events planned in the area.

Eddie Murphy insists he never 'made fun' of Michael Jackson

Eddie Murphy insists he never 'made fun' of Michael Jackson

This screenshot is the webpage for FPS Washington Elementary School, led by principal Erica Kobza. The site has multiple welcoming messages expressing the school's philosophy of welcoming and accepting diverse families, students and people. 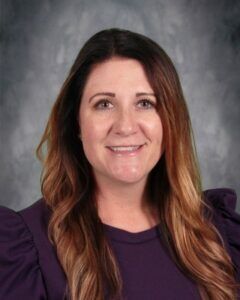