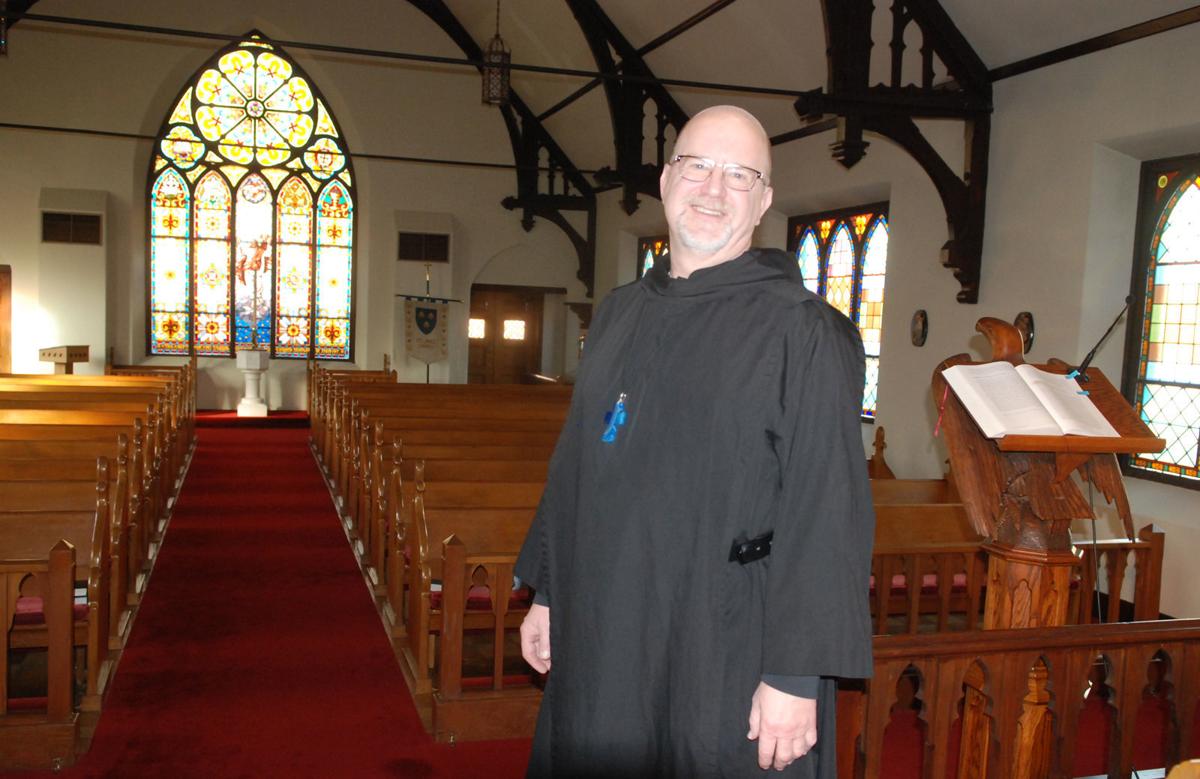 The Rev. Brother Jerry Thompson is the new priest at St. James’ Episcopal Church in Fremont. He’s also a novice at the Incarnation Monastery in North Omaha, which is part of the Benedictine Way. 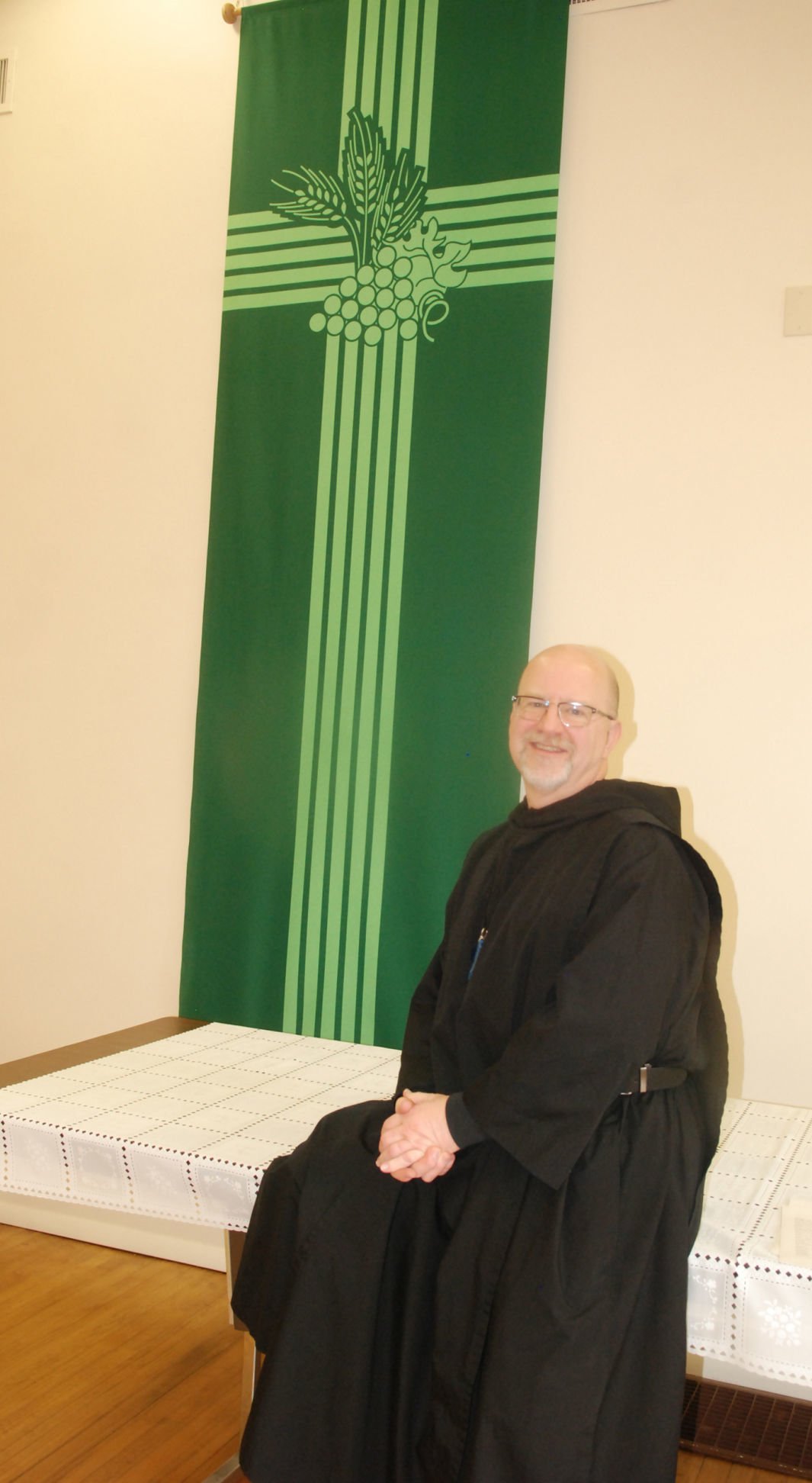 The Rev. Brother Jerry Thompson is the new priest at St. James’ Episcopal Church in Fremont. He’s also a novice at the Incarnation Monastery in North Omaha, which is part of the Benedictine Way.

The night before Jerry Thompson went to graduate school, he made an unusual comment to his wife.

“I think I should be going to seminary,” he said, “But I don’t believe in God, so it doesn’t make a lot of sense to me.”

Eventually, it would make sense.

And today, the Rev. Brother Jerry Thompson is serving as the new priest at St. James’ Episcopal Church in Fremont.

He’s also a novice at the Incarnation Monastery in North Omaha, which is part of the Benedictine Way.

Throughout his life, Thompson has known success and pain and learned one thing well: “God wants us to love each other fully—and love those who are most vulnerable in the way they need.”

Thompson grew up in Warren, Ohio, where he went to the Christian Church (Disciples of Christ).

“I had a strong sense that I was called to ordained life,” he said.

But an older brother, whom he describes as an unbelieving scientist, had a huge influence on him and he stopped believing in God.

Thompson majored in English at College of Wooster in Ohio and married two weeks after graduation. Thompson and his wife, Carol, would have two children, Andrew and Elizabeth.

After graduating from College of Wooster, Thompson worked as a reporter and photographer at the Holmes County Farmer Hub in Millersburg, Ohio.

Holmes County is about 40 percent Amish and Mennonite.

Thompson enjoyed meeting people from a wide variety of areas in life.

“That’s one of the ways that work was similar to ministry, being involved in people’s lives—nowhere as deep as ministry—but getting a little snapshot of their experiences,” he said.

Thompson then decided to go to graduate school at Indiana University in Bloomington.

That’s when he mentioned to Carol that he thought he should be going to seminary.

Then still an atheist, Thompson went to graduate school.

But he’d have a conversion experience.

At the time, his wife was working in a library alongside a woman who was an evangelical. The two would talk and Carol would share those conversations with her husband.

“During that conversation, I felt the presence of God in a way that was undeniable and was different than anything I had experienced before,” he said.

The Thompsons started attending a large Disciples of Christ parish. At the same time, he began going to a Roman Catholic Mass on Saturday nights. He did that for about three years.

“The Disciples was familiar and I felt at home, but I also really loved the mystery and the liturgy in the Roman Catholic Church. It was very different worship experiences and they had a different impact on me,” he said.

Thompson had begun attending a Disciples of Christ seminary, when he became acquainted with some Episcopal students.

“I liked something about their spirituality,” he said.

While he deeply appreciated the Disciples of Christ tradition, Thompson said the spirituality didn’t match who he was. At one point, he went to an Episcopal Eucharist.

“I believe the Holy Spirit was moving me to a place where I could best serve,” he said.

Thompson’s service would include: a curacy (the first position out of seminary) in Bloomington, Illinois, for 18 months, then as rector of a parish in Cleveland for six years. He’d serve as a Canon in charge of liturgy, formation and stewardship at a cathedral in Indianapolis.

The Thompsons then came to Lincoln, where he was rector of St. Mark’s on the Campus Episcopal Church for “14 very happy years.”

Parishioners would prove incredibly supportive during a time of trauma.

“The death of a child is really hard on a marriage,” Thompson said. “The marriage ended a year later.”

After those situations occurred, Thompson said he felt he was being moved to a different place.

“I’d gone through a lot of healing between the time of the ending of the marriage and October of 2018,” he said.

Then his spiritual director, Brother James Dowd at Incarnation Monastery in North Omaha, asked if he’d ever thought about monastic life.

It was something he’d considered. He had a deep commitment to prayer and had done silent retreats. After his marriage dissolved, he’d looked at monastic orders on the Internet.

But usually the cut-off for becoming a monk is 40 or 45 years old.

So Thompson, who’s now 59, didn’t think it was an option.

Brother James said, however, that exceptions are made and he was willing to enter into a discernment process to see if God was calling Thompson in that direction.

Thompson is a novice. He’s living in the community, entering into the prayer schedule and completing the classes and required reading.

Shortly after Thompson moved into the Incarnate Monastery, he learned about an idea to have him serve at St. James’ part time.

“Not only do I get to develop that monastic vocation that I have, but also continue functioning as a priest and that’s a good thing,” he said.

Thompson is in Fremont on Sundays and Wednesdays.

Having begun his work at St. James’, he’s still learning about this community.

He appreciates the parishioners’ faithfulness and plans to guide them as they look to where God is calling them. He said parishioners enjoy being together and are engaged in their spiritual growth.

Sunday attendance varies from 16 to 33.

“We have a weekday Eucharist that’s getting about seven or eight people every week and that’s very healthy for the size of the congregation,” he said. “I know there’s a lot of hope about growing in numbers again. I think our focus needs to be not only in growth in numbers, but just as much in growth in ministry and reaching out to the larger community.”

Thompson hopes to take his junior vows in about a year at the monastery.

“For St. James’, my plan is to help them find their plan—not to dictate any kind of plan,” he said. “That needs to come from them. They need to listen to God and decide where they’re being called and I’ll walk that journey with them, but I won’t tell them what it is.”

Just as he’s known success and pain, Thompson knows something else: “We can trust God all the time.”