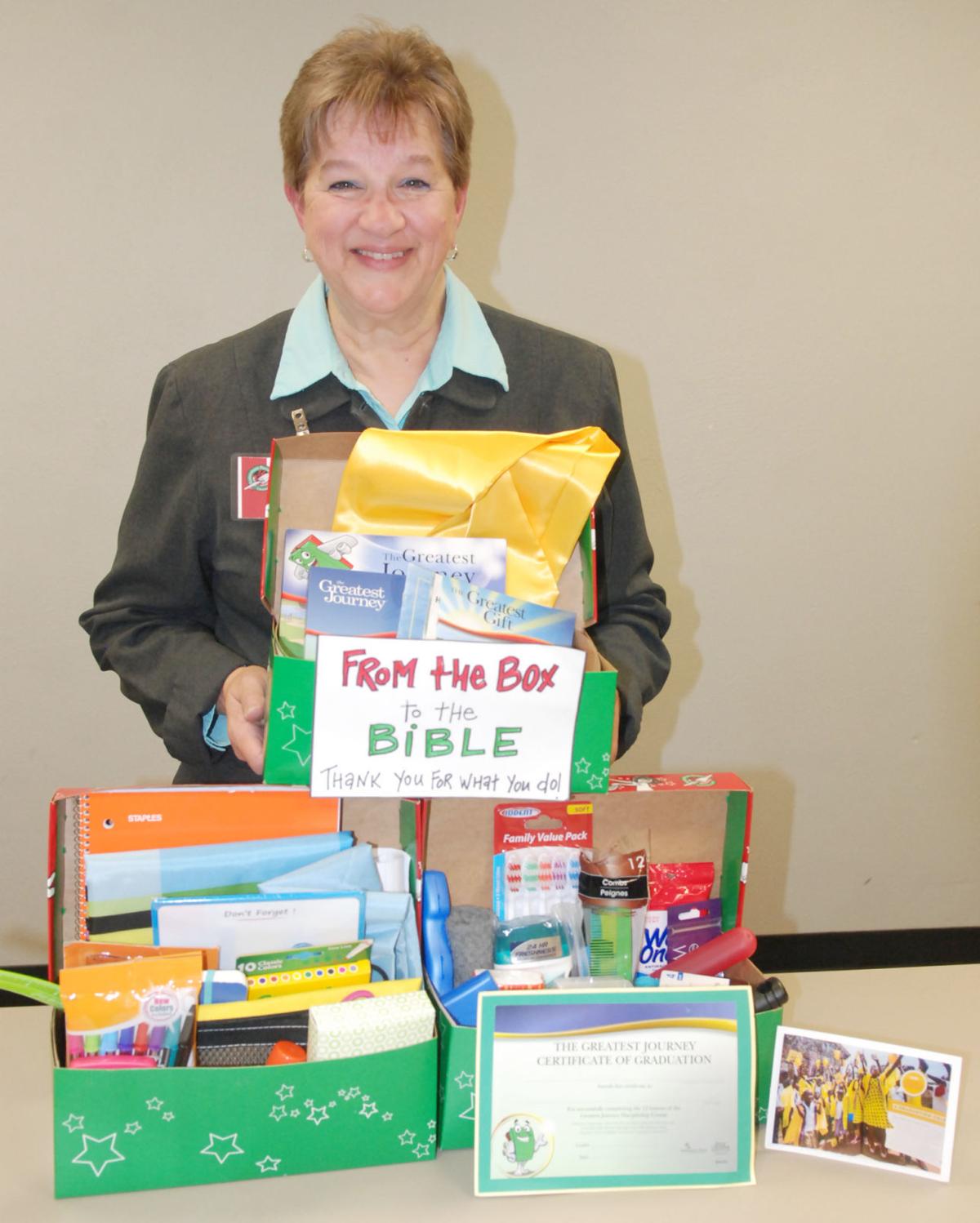 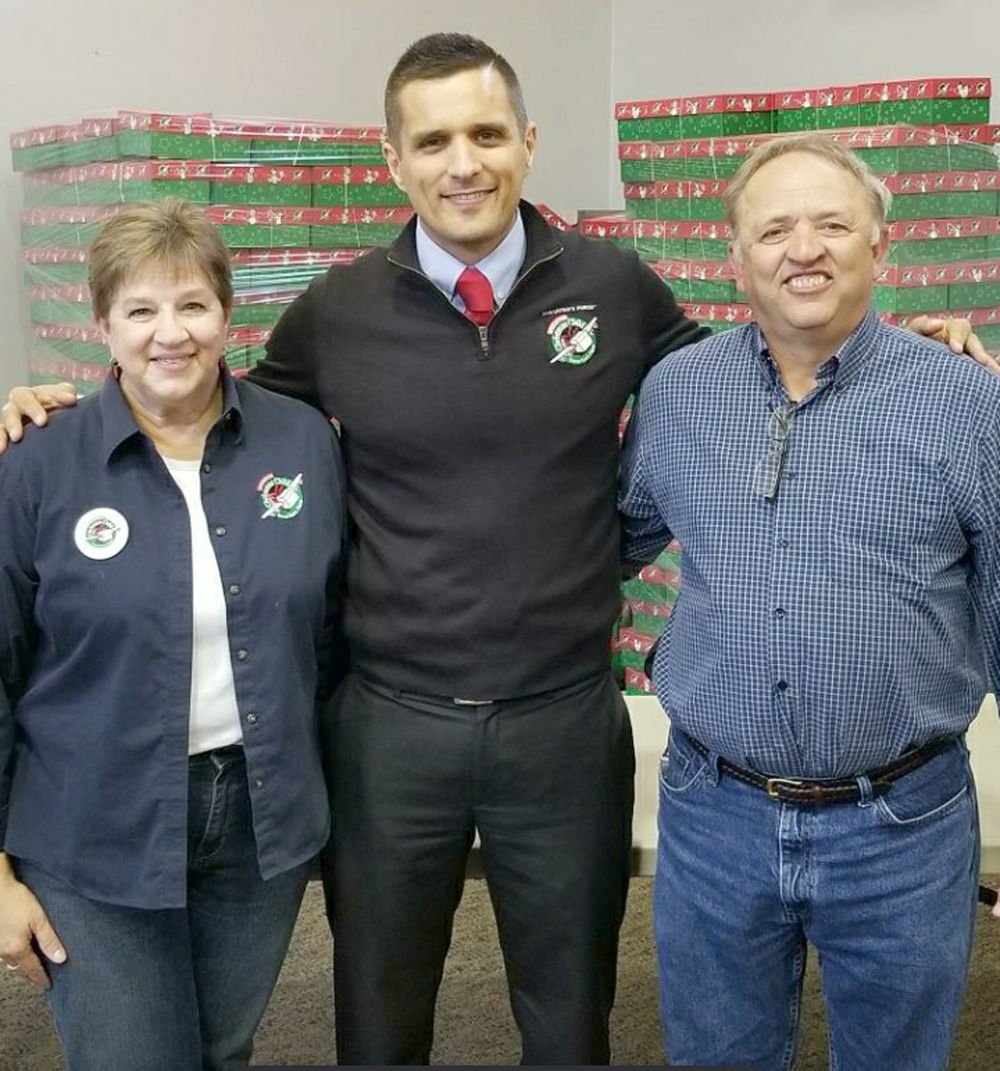 Fremonters Charlotte and Ron Young are shown with Vladimir Prokhnerskiy, center, who is from Ukraine. The Youngs are involved in Samaritan's Purse's Operation Christmas Child. 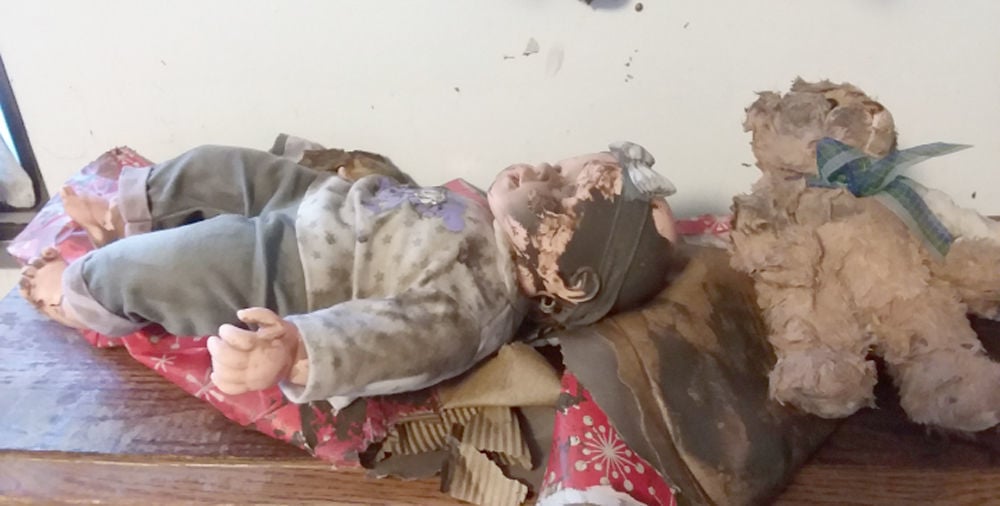 A doll and a teddy bear were among items destroyed in mid-March flooding. Fremonter Charlotte Young had bought the items to put in a shoebox for Operation Christmas Child. 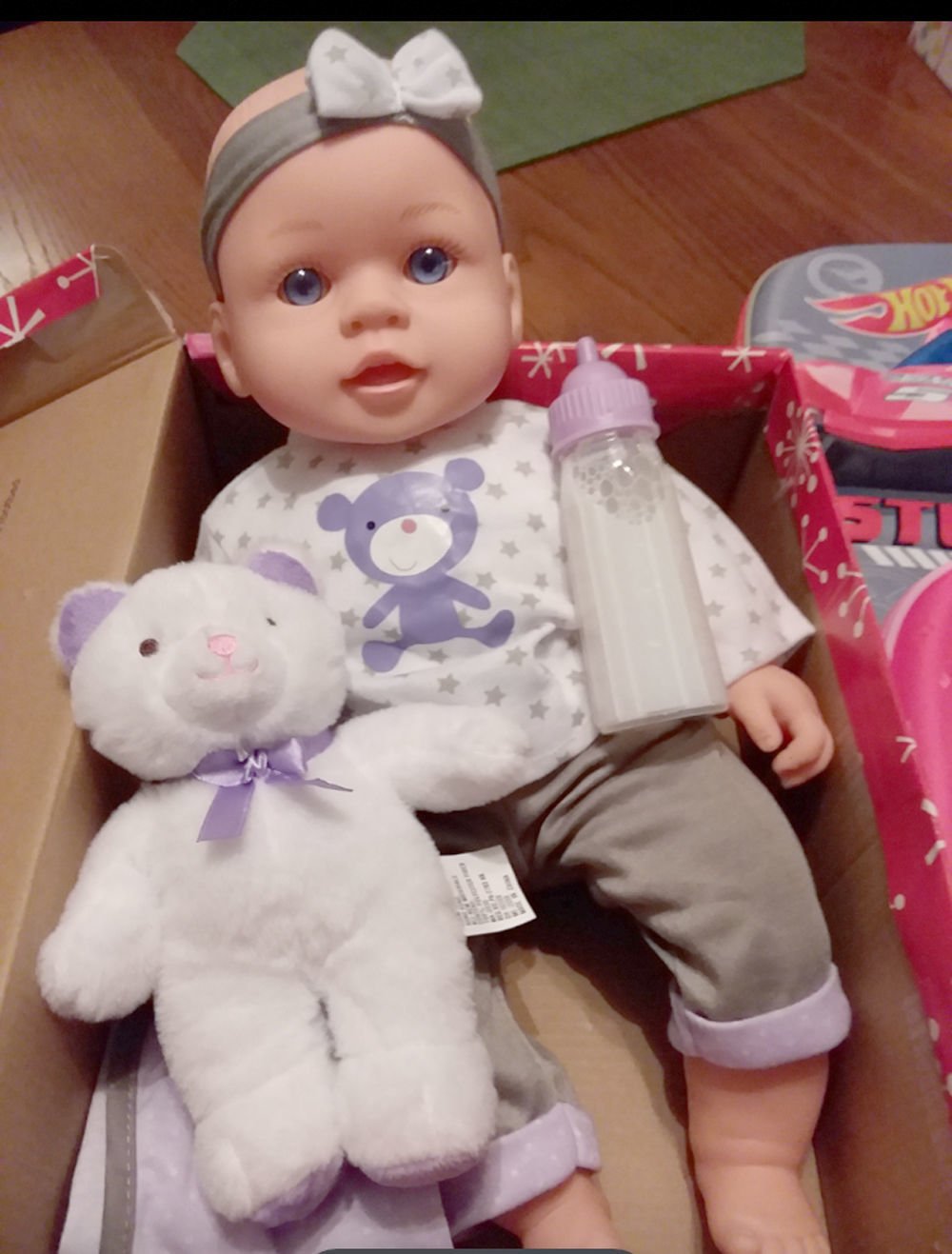 Charlotte Young of Fremont had purchased this doll and teddy bear to put in a shoebox for a child as part of Operation Christmas Child. The toys were destroyed during March flooding. 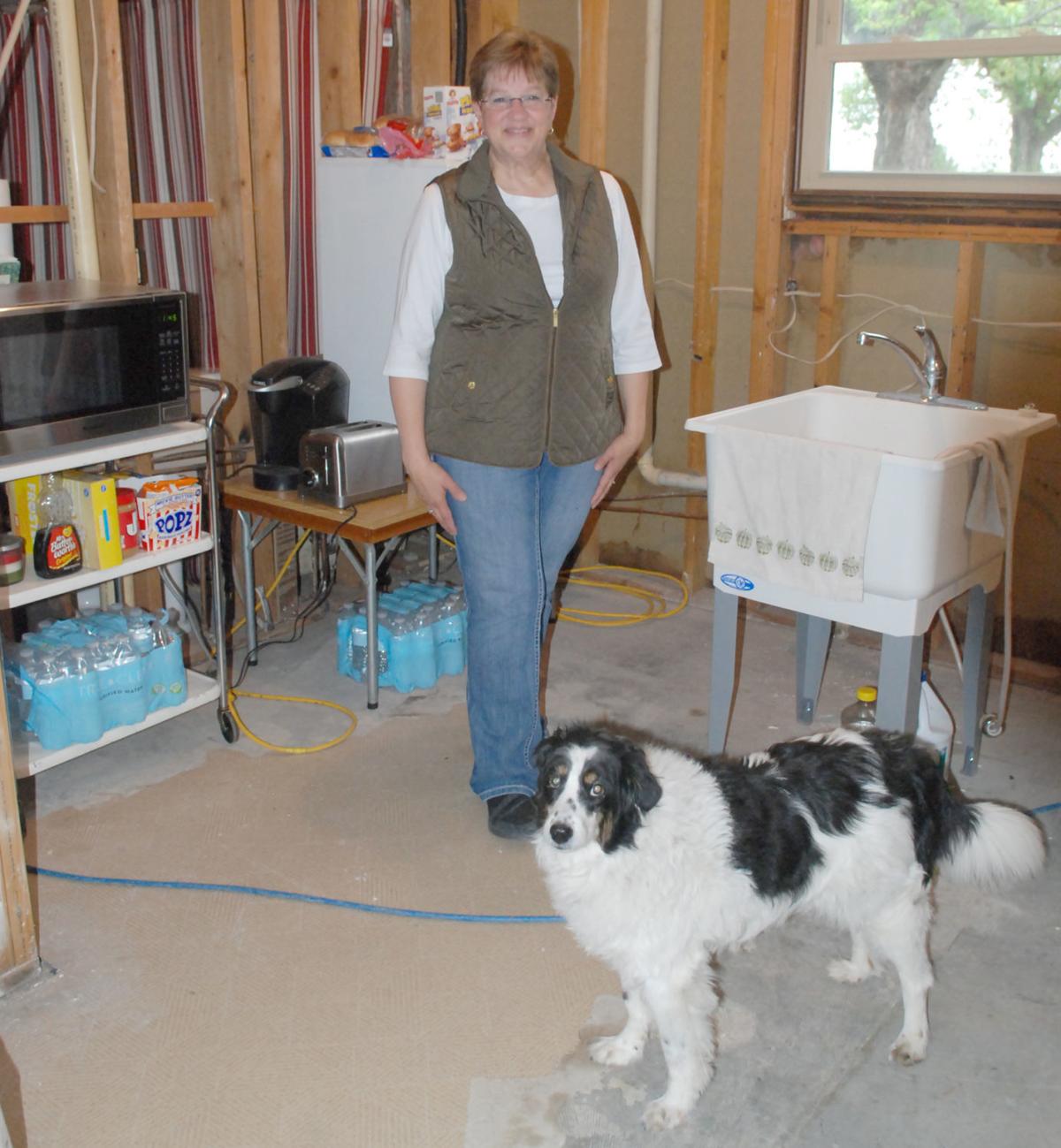 Charlotte Young and her dog, Sophie, are shown in her family's makeshift kitchen in May.

The Fremont woman never expected that she and her husband, Ron, would need shoes themselves.

But when flood waters filled their Dove’s Cove home last spring, the local residents found themselves needing these and other items.

The flood also destroyed a huge tub and several bags full of items that Charlotte had spent the year collecting for OCC, a Samaritan’s Purse program that sends gift-filled shoeboxes and information about Jesus Christ to children around the world.

Local residents have helped the Youngs since the flood. They also received help from Samaritan’s Purse.

And while flooding damaged or destroyed many things in the Youngs’ home, it didn’t dampen their desire to help children in need and Charlotte is continuing her work as drop-off site coordinator for OCC at First Lutheran Church in Fremont.

First Lutheran members have packed boxes since the year 2000.

This is the 14th year the church has been a drop-off site for the boxes.

The goal in eastern Nebraska is 17,875 boxes, Young said.

Recently, the Youngs had the opportunity to meet Vladimir Prokhnevskiy from Ukraine.

Like other people who received shoeboxes as children, Prokhnevskiy had his own story.

He talked about being one of nine children, who had to share shoes and take turns playing outside in them.

As a boy, he’d tell his teacher that he’d left his school supplies at home. The teacher then would make him stand and go and beg other students for a pencil. The students would get mad and ask why he didn’t bring his own items to school.

The real reason he didn’t bring them was because he didn’t have any.

But when he received school supplies in a shoebox, he had special items because they came from another country.

And he got his very own toothbrush, which was a cool one.

Young also cites the case of Alex Nsengimana of Rwanda, who said that in an orphanage, a child can be given a piece of paper and a pencil. That child will draw guns and things from his or her past.

But receiving a shoebox can create new memories for that child.

And that box may be the answer to a child’s prayer and fulfill a need.

The Youngs encountered their own needs in March.

“When we left our house before the flood, we only took the shoes on our feet and clothes for the next day, because we didn’t think it was going to be this bad,” she said. “When I mentioned that to someone, a co-worker and a fellow church member went out and purchased new shoes for us.”

Shoes were something Young always tried to pack in the children’s boxes, especially after hearing stories of youngsters — like Prokhnevskiy — who’d needed them when he was younger.

She never dreamed she’d be on the receiving end.

“I needed shoes and God provided them through other people,” she said. “I look at shoes totally differently because of that.”

A coworker also brought three bags full of clothes for the couple to look through.

“Clothes are also something I try to include in my shoeboxes for the children who don’t have an extra change of clothes,” Young said.

In addition, the Youngs received an anonymous envelope with some money from someone who’d been saving for a rainy day.

“And that person thought this was a rainy day! Just amazing,” Young said.

When the Youngs were able to return to their home, they found that the flood waters had tipped over furniture. Their refrigerator had been picked up and dropped on its backside. Dressers were under beds. Precious items were destroyed.

Because Young collects items year-round for OCC shoeboxes, she’d already had many school supplies and toys, all of which were ruined — including a special baby doll and teddy bear and backpacks that would fold into a shoebox.

The large black, plastic tub they were in was tipped over. She lost 20 years of OCC photographs, too.

Like other flood-impacted families, the Youngs faced the huge job of discarding what was destroyed, salvaging what they could and cleaning up.

“You don’t know where to start,” she said.

Samaritan’s Purse sent a church group from Lincoln to assist as well.

“The organization I’ve worked with all these years came back full circle to help us out,” she said.

She didn’t help with the intention of getting a payback.

“I do what I do because I want to — not because I’m looking for something in the end,” she said.

But she is grateful to all who helped and hopes people will fill shoeboxes again this year.

“Seeing how people in Fremont came together to help out those of us in need, I hope they’ll have a heart to help children in other countries who’ve lived through disasters and lost what little they had,” Young said.

Getting involved in Operation Christmas Child

How do people get involved in Operation Christmas Child?

Although young, Jonah and Montana Renter have lots of history at The Hope Center for Kids in Fremont.

The Nickerson Volunteer Fire Department’s Fall Festival will take place from 6 p.m. to midnight Saturday and noon to 6 p.m. Sunday at the fire…

The annual audit of Fremont Public School’s finances went well and staff members were commended for their work.

The VFW Auxiliary will meet at noon Monday at Godfather’s Pizza in Fremont.

The air was brisk as Cortney Schaefer walked toward one of the historic light poles in downtown Fremont.

Fremonters Charlotte and Ron Young are shown with Vladimir Prokhnerskiy, center, who is from Ukraine. The Youngs are involved in Samaritan's Purse's Operation Christmas Child.

A doll and a teddy bear were among items destroyed in mid-March flooding. Fremonter Charlotte Young had bought the items to put in a shoebox for Operation Christmas Child.

Charlotte Young of Fremont had purchased this doll and teddy bear to put in a shoebox for a child as part of Operation Christmas Child. The toys were destroyed during March flooding.

Charlotte Young and her dog, Sophie, are shown in her family's makeshift kitchen in May.