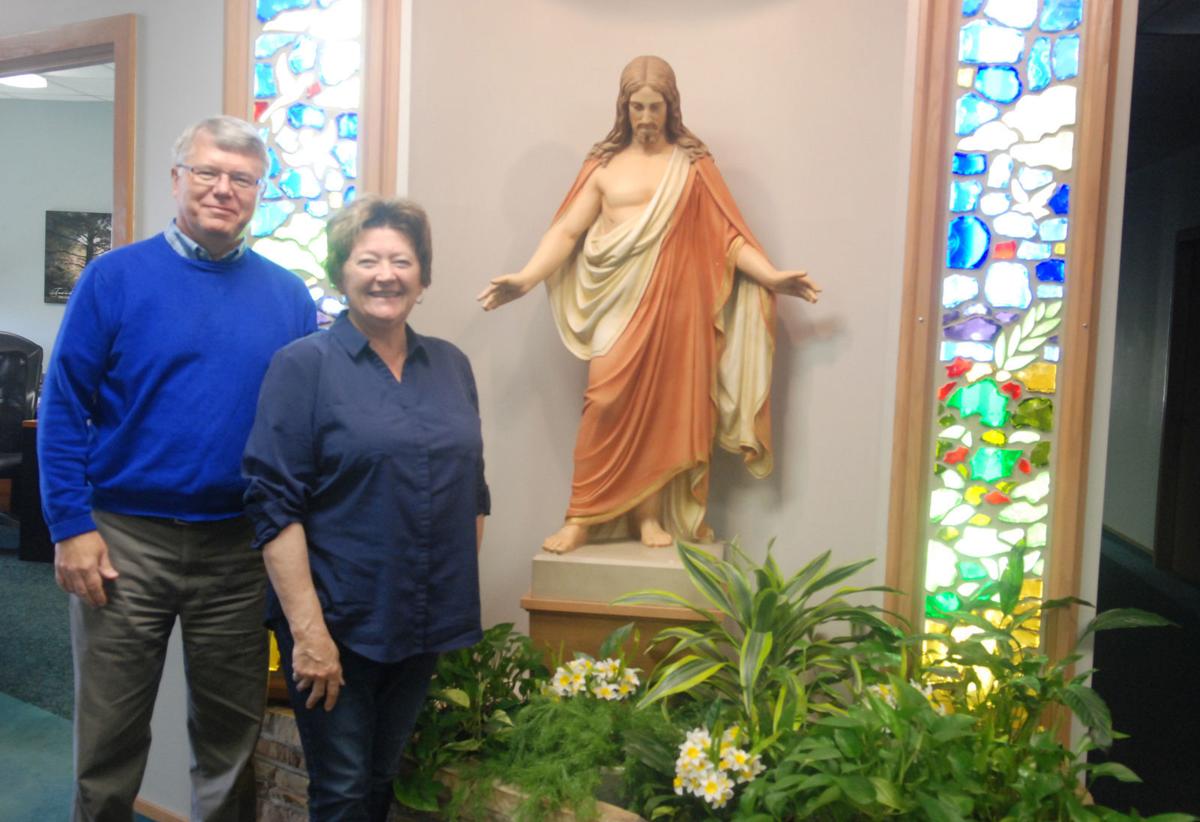 The Rev. Joel Schroeder and the Rev. Nicki McIntyre are clergy in the Faith Ambassadors Lutheran Parish. The parish consists of five area worship centers which are part of a collaborative effort. 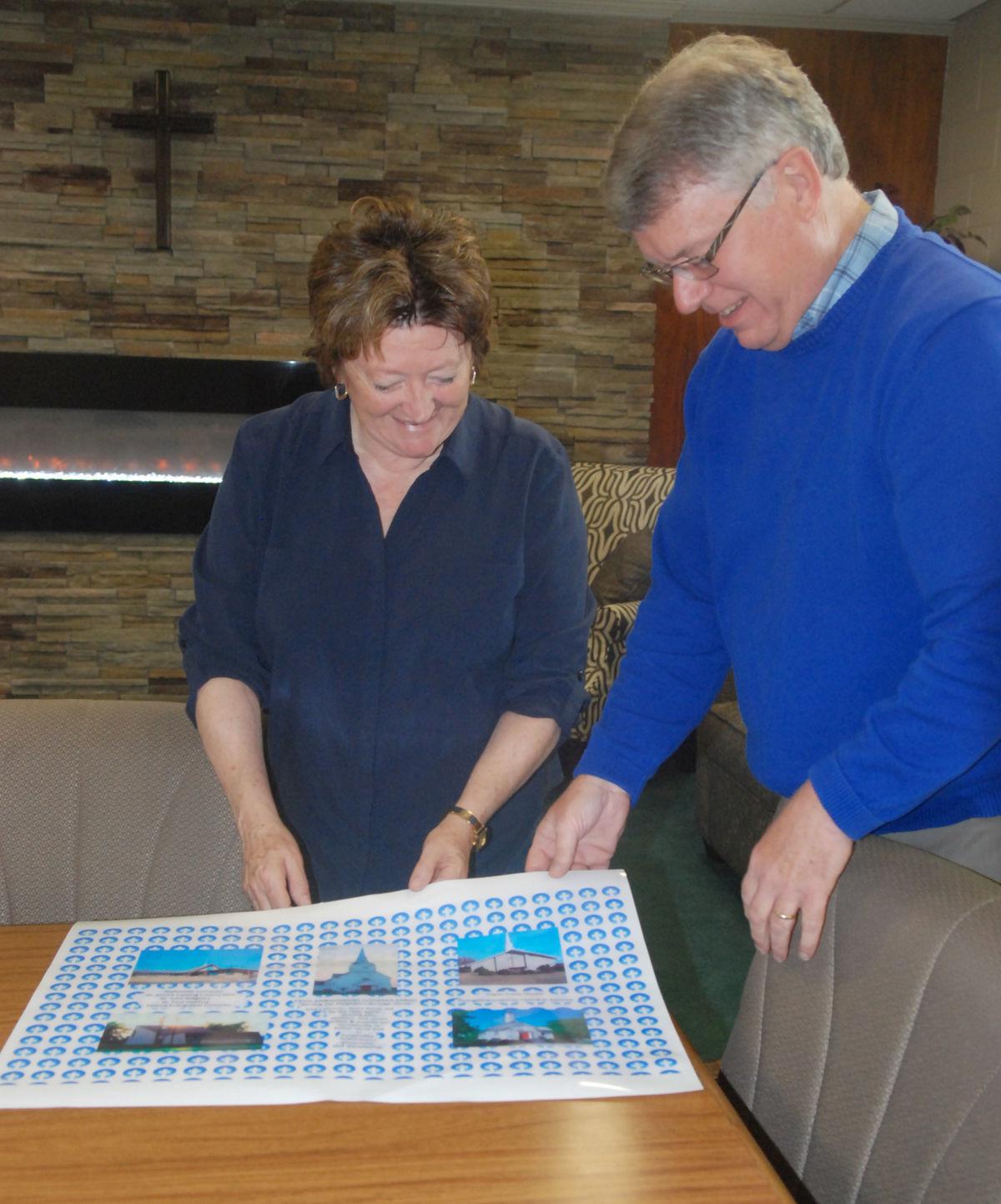 The Rev. Nicki McIntyre and the Rev. Joel Schroeder look at a poster that includes photographs of the five area worship centers that are part of the Faith Ambassadors Lutheran Parish.

About eight years ago, the Rev. Joel Schroeder was visiting with an area couple.

Immanuel Lutheran Church in Snyder had closed due to declining membership. The couple was concerned about the future of their church, too.

So Schroeder suggested they all pray for God to open avenues so this wouldn’t happen. Schroeder took the concerns to the cluster, a group of clergy from area congregations in the Nebraska Synod of the Evangelical Lutheran Church in America.

In the meantime, an organization called ERMAA (Enhancing Rural Ministry for Aging Adults) began in the area. Clergy including Schroeder and the Rev. Nicki McIntyre, brought representatives from different congregations together to see what they could do to improve life for older area residents. Out of that came a food pantry and all sorts of health efforts and personal services for those who didn’t have family around to help.

“We didn’t realize it at the time, but that was God’s answer in a real way for us to address the issue of small congregations in our area,” Schroeder said.

Area residents realized that by working together, a parish with several worship centers (churches) could do more than what one center could do by itself.

Five area churches have combined to form one parish. Basically, these five centers have become a larger church, but each one retains its own individuality. They each have their own Sunday worship services and Sunday schools, youth and women’s groups and property, but they can collaborate on projects and other ministries.

Members may go to any of these worship centers.

The five worship sites share the clergy, who collaborate to teach confirmation class students who usually meet at Redeemer. There are 27 students from several area towns.

Schroeder noted something else.

“We have a goal in 2018 to have at least one youth from each worship center who will go to the ELCA National Youth Gathering in Houston,” he said.

ERMAA was the brainchild of Vance Valerio, who worked at the University of Nebraska at Omaha and was a dean of students at Midland University. It continued to expand.

Now congregations in Scribner, Hooper, Uehling and the surrounding area is part of ERMAA, which is not clergy-led.

“It’s quickly obvious that laypeople are very capable of taking charge and they were being creative and it’s just continuing,” she said.

Initially, seven churches were involved in the parish collaboration. Two decided not to become part of the parish, but council representatives were elected from five of the other worship centers.

In 2015, the worship centers formed and voted on a covenant, detailing how they could work together structurally and functionally, focusing on where their work would be most productive.

The parish isn’t a merger, but a collaborative effort for sharing the Gospel.

The parish also has a new transformation ministry team with representatives from all the worship centers. The team is a subgroup of the council and its purpose is to present a mission plan for the parish.

In Uehling, evangelists are preparing to start a parish Kids for Christ group for those in kindergarten through sixth grade. Participants will study Scripture, play games and have food and fellowship.

Schroeder noted that the collaborative effort is a community endeavor.

“We are seeking to work in the public church,” Schroeder said. “There’s people all over who believe in God, who don’t go to church and they seek to be spiritual with their families. They pray, but they’re nor members of a church.

“So you come and ask them to help for a project like the food pantry and they’re more than willing to help, but for some reason they choke when it comes to becoming a member of an organization,” Schroeder continued. “So we’re doing public Gospel work with people who respond and want to do it.

“And we welcome anybody who wants to help us accomplish something for God and help us dream up and shape what it could look like.”

McIntyre said any congregation that would like to join is welcome to come and sit in the conversation.

She noted that in August members of the Ridgely congregation plan to bake bread and visit the 20 to 30 families living on acreages within a 5-mile radius of that worship center.

“We don’t know them personally, but we need to as a worship center be a better neighbor to our neighbors,” McIntyre said. “The purpose is not to fill pews. The purpose is to finally do what Jesus said and be a good neighbor.”

She said the Ridgely congregation also plans to provide a potluck meal for people in its neighborhood and the United Evangelical Lutheran Church in Scribner plans to bake cookies which will be taken to new people who move to town.

A Stephen Ministry, where people are trained to provide additional help for pastoral care. Laypeople also are being trained to deliver Holy Communion to the homebound.

“That’s one of our dreams and goals,” she said.

Study: Access to nature is linked to improved mental health

Study: Access to nature is linked to improved mental health

Singers are being sought for a community choir.

The Rev. Joel Schroeder knows the important role that small congregations play in a community.

The Rev. Joel Schroeder and the Rev. Nicki McIntyre are clergy in the Faith Ambassadors Lutheran Parish. The parish consists of five area worship centers which are part of a collaborative effort.

The Rev. Nicki McIntyre and the Rev. Joel Schroeder look at a poster that includes photographs of the five area worship centers that are part of the Faith Ambassadors Lutheran Parish.