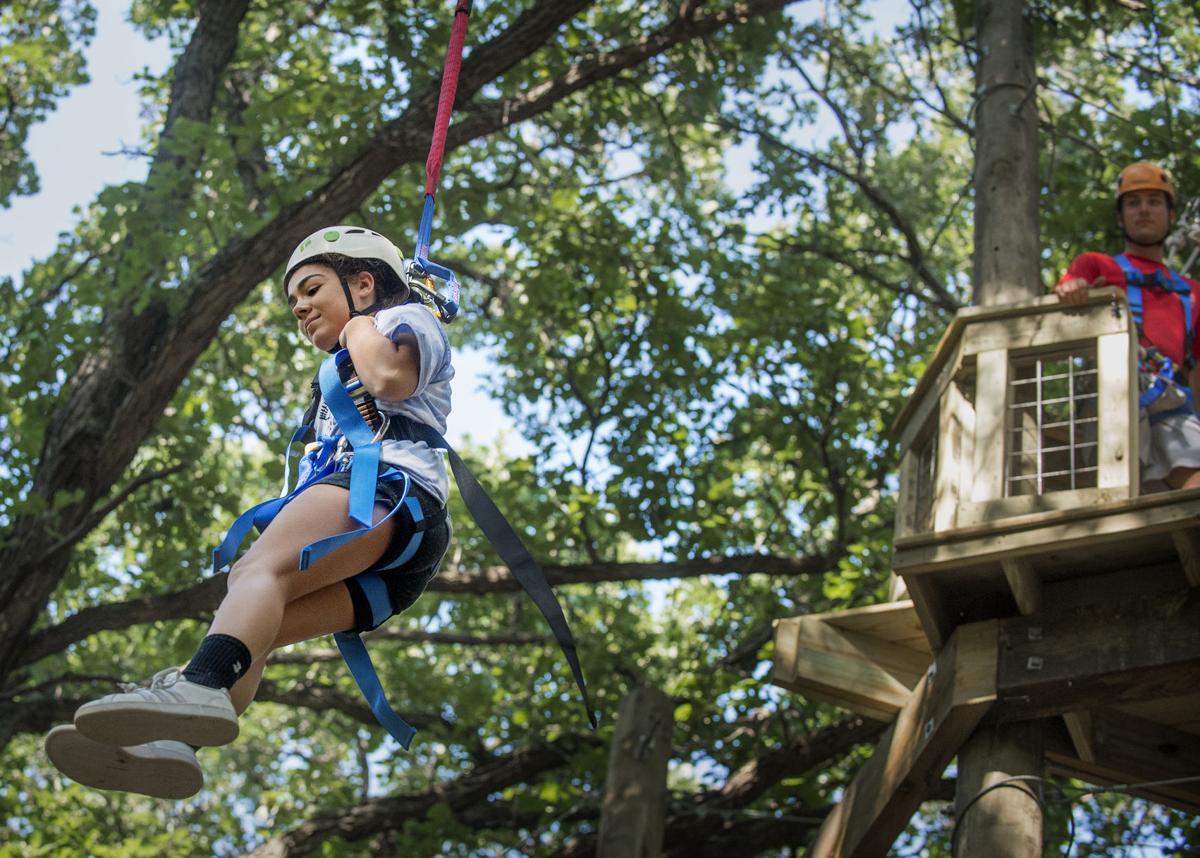 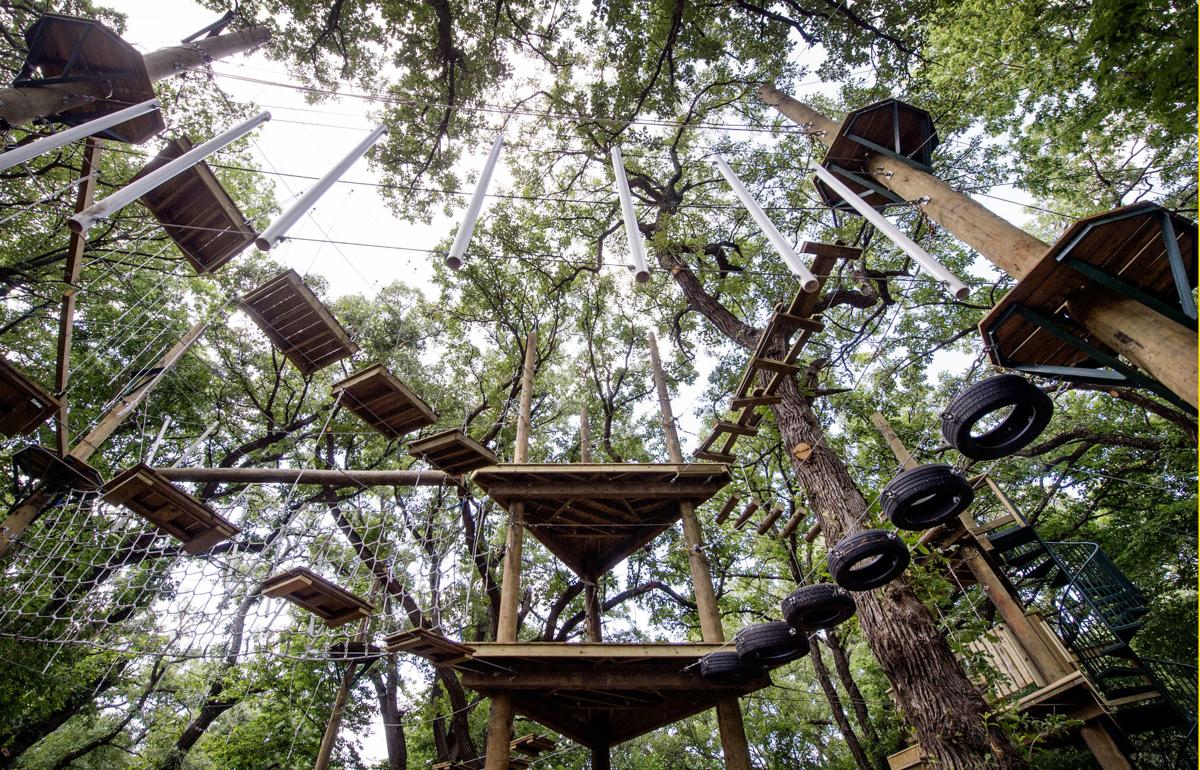 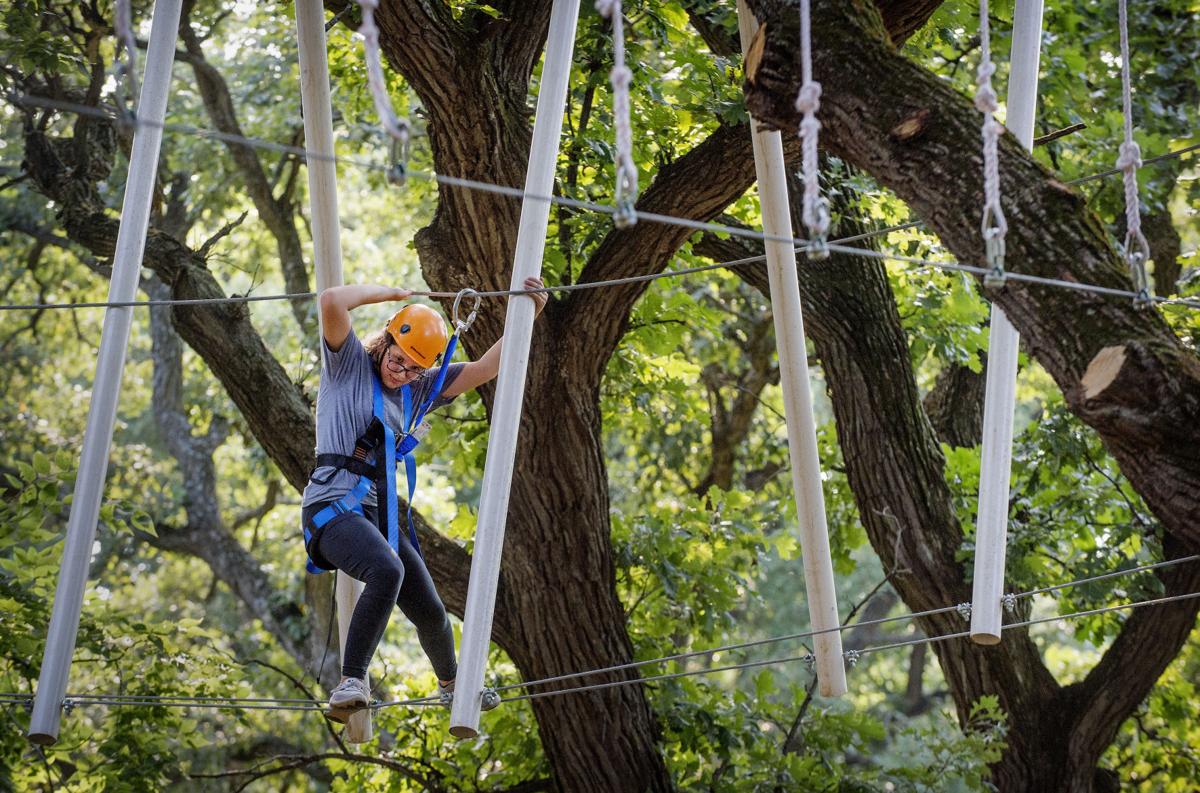 Thirty feet off the ground, Girl Scout Cayleigh Eickhoff maneuvers through the x-pipes on Thursday at Eugene's Adventure Course near Nebraska City.

Thirty feet off the ground, Girl Scout Cayleigh Eickhoff maneuvers through the x-pipes on Thursday at Eugene's Adventure Course near Nebraska City.

Girl Scouts attending Camp Catron will now have a new state-of-the-art adventure course to climb, swing and zip line on.

Camp Catron, located at 609 N. 60th Rd. near Nebraska City, is one of four camps owned by the Girl Scouts of Nebraska.

Catron, who passed away in 2002, donated the land that the camp is situated on with his brother, Robert. Eugene was a continual benefactor of Camp Catron and the Girls Scouts of Nebraska.

"We had been talking for a couple years about an adventure course with high elements for people that had sort of graduated from the challenge courses and wanted something a little bit more challenging," council properties director Michael Davis said.

The new course features 16 elements spread throughout its two levels, one 20 feet off the ground and the other 35. These include rope bridges, nets and tire walks.

"The upper level is a little bit more difficult than the lower level, so they can kind of choose their level of challenge," director of operations Rob Anderson said.

Unlike other courses at the camp that allow for one or two participants, Eugene's Adventure Course allows for up to 15 people on the course at a time.

The course has several top-of-the-line features not seen anywhere else in the region, including QuickFlight, which allows for a "high-thrill exit" off the course. It also utilizes Coudou Pro, which has participants clipped in for the entire duration, as opposed to transferring for each new element by a third party.

"We're probably, according to the installer, one of about a half a dozen that are using this system in the country right now," Anderson said. "So we're kind of at the forefront with this leading-edge technology."

Other Girl Scout camps in the state have also been at the forefront of new courses. Last year, the Soaring Hawk Zip Line Tour opened at Camp Crossed Arrows, which is north of Nickerson. The course was the first continual zip line tour in the state, Davis said.

Eugene's Adventure Course is also available to the public through reservations. Participants must be at least 10 years old and weigh between 65 and 275 pounds.

Anderson said he believes the course lines up perfectly with the Girl Scouts' mission to build self-confidence and trust through teamwork.

"We're giving them situations that help them build their courage, confidence and character by cheering each other on," he said. "So it's just a natural fit for the Girl Scout mission to do something like this and empower them to step outside that comfort zone and really build what they believe they can do."