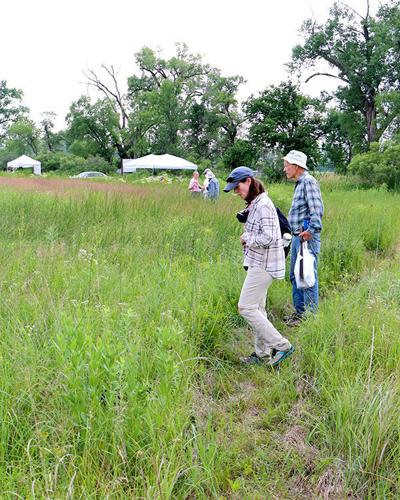 Jill Brothers of Yutan discusses prairie plants with Tim Knott of the Wachiska Audobon Society recently at the Knott Tallgrass Prairie near Yutan. 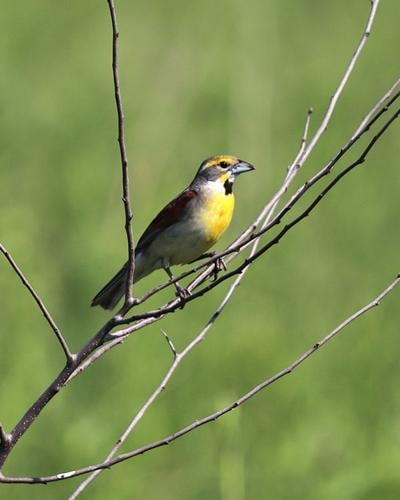 A dickcissel perches on a branch, keeping a close eye on the humans invading its prairie home in the Knott Tallgrass Prairie near Yutan.

YUTAN – By the mid-20th century, much of the North American prairie grasslands had been destroyed by extensive farming. But a small plot of land north of Yutan has endured, almost untouched by man for centuries.

On a hot afternoon in early July, a handful of prairie enthusiasts and amateur horticulturists saw such a place during an open house at Knott Tallgrass Prairie, located just north of Yutan on a minimum maintenance road.

The namesake of the prairie, Tim Knott, hosted the event. The prairie is owned by the Wachiska Audubon Society of Lincoln. Knott is a member.

The prairie was named for Knott after he had suffered a hip fracture five years ago. He joked that the society thought he wouldn’t survive the injury and christened the prairie in his honor. As a result, he feels a bit of ownership for the land, he added.

Knott was a little more serious as he talked about the prairie and its formation. Plants migrated from the north and south during warm periods between “ice ages,” he said. What resulted were the prairies that stretched across the Great Plains, filled with tall grasses, flowering plants and teeming with wildlife.

“Most of these plants here are more at home in Texas and Oklahoma,” he said as he looked out over the prairie.

The society set up several educational tents around the 21-acre site during the open house, focusing on plants and insects that are found there. Several of the plants were marked with signs identifying their common names.

The land was previously owned by the Storm family. Knott said it may have had cattle grazing on it many years ago, but for the past several decades it has been allowed to return to its natural state, aided by the untouched patches of prairie surrounding it.

“It was able to recover because there were a lot of species here,” Knott said.

The wet meadow prairie is less than a mile from the Platte River in the area locals call “the bottoms.” A high water table draws hundreds of plant species and rare birds. During the open house, a pair of dickcissels could be seen perching on tall grass stems.

Most of the visitors were transported to the site in an old school bus by Ron Drews, who has lived in the area all of his life and owns land around the prairie plot. He provided tidbits of information about the local area for the group.

The Wachiska Audubon Society of Lincoln owns several prairie properties in southeast Nebraska, managing them as a way to provide habitat for prairie plants and animals and offer educational opportunities.

Sometimes a subscription detox can be great for your health

Why you feel tired after eating a big holiday meal

Why you feel tired after eating a big holiday meal

Survey: Vegetarianism is on the rise in the U.S.

Survey: Vegetarianism is on the rise in the U.S.

Jill Brothers of Yutan discusses prairie plants with Tim Knott of the Wachiska Audobon Society recently at the Knott Tallgrass Prairie near Yutan.

A dickcissel perches on a branch, keeping a close eye on the humans invading its prairie home in the Knott Tallgrass Prairie near Yutan.