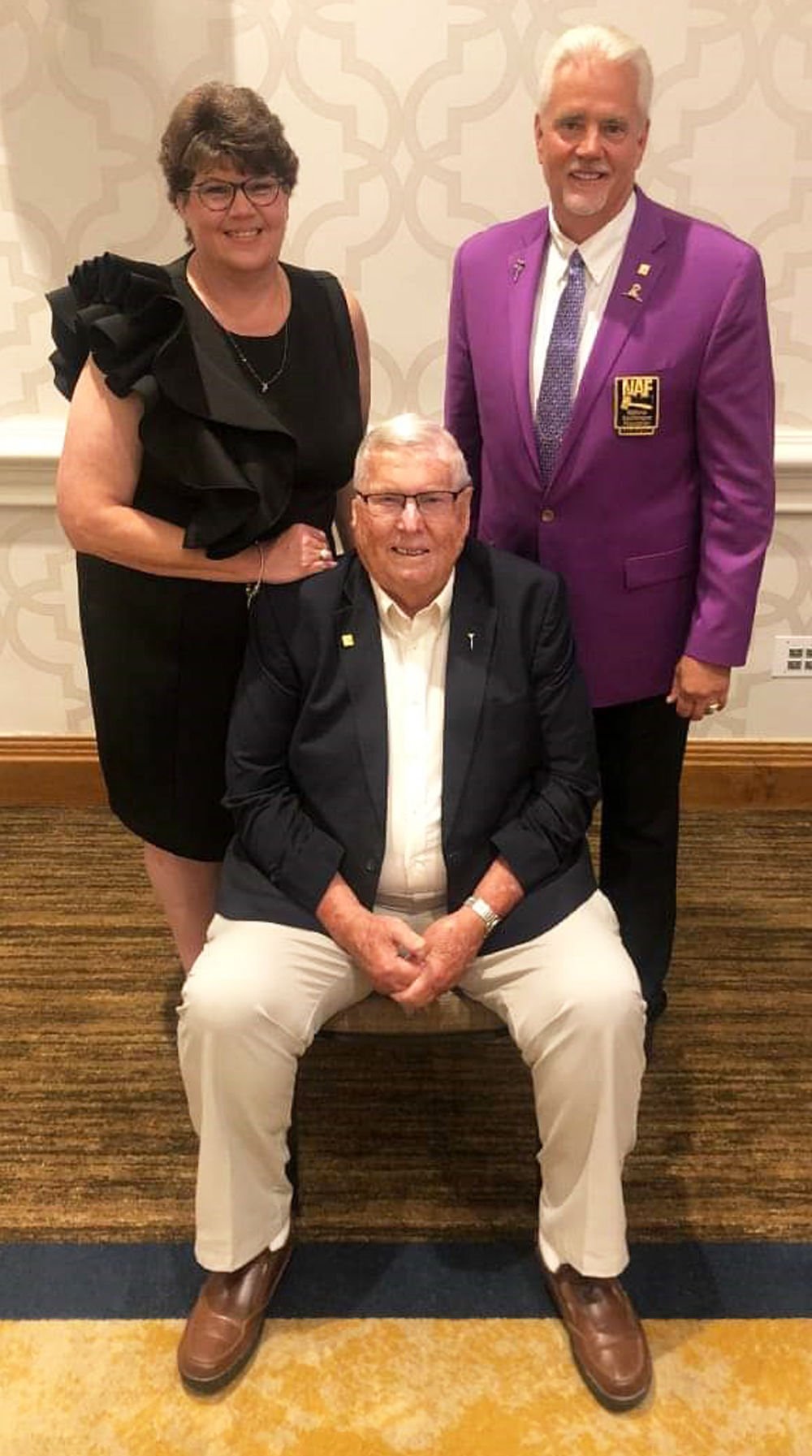 Jennie Rasmussen and her brother, Jay Nitz, stand behind their dad, Jack Nitz, who founded Jack Nitz & Associates years ago with his wife and their mother, Delores. Jack Nitz, a longtime businessman and community volunteer, died Oct. 31. He was 84. 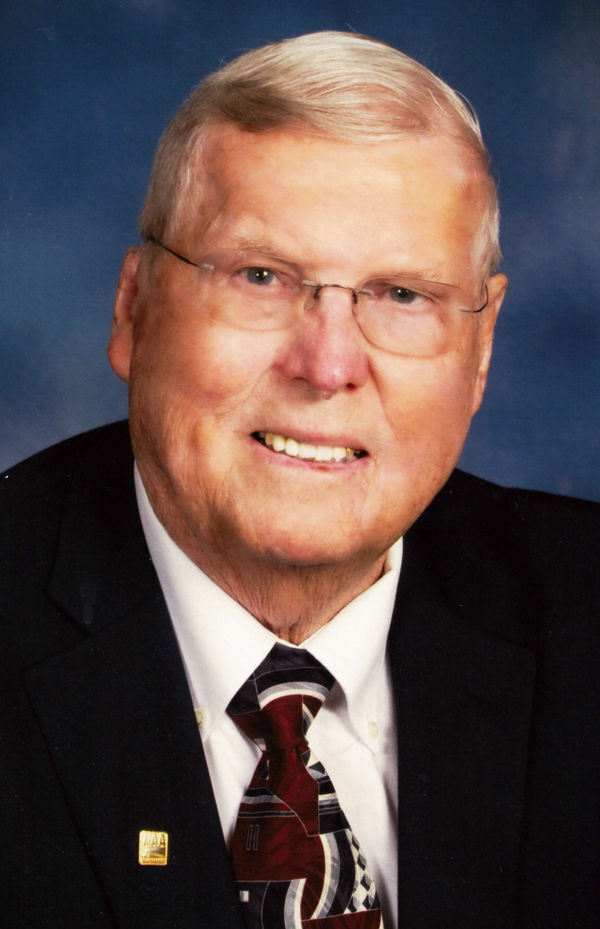 An early indicator of Jack Nitz’s career path occurred when he was 5 years old.

Nitz had gone to an auction with his dad, Joe. When he returned home, the little boy cut pictures of farm equipment out of a catalog.

He lined up the pictures and had his own little auction with his parents and Aunt Marge as the bidders.

Years later, Nitz launched a business that would become one of Eastern Nebraska’s leading full-service auction and real estate firms. Nitz guided his business through changes in markets and economy. He’d mentor new auctioneers and serve in many organizations. He’d conduct and take part in hundreds of benefit auctions.

When Nitz died on Saturday, the community lost a longtime businessman and volunteer and his children and grandchildren lost a beloved dad and grandpa.

“He was my best friend,” said his son, Jay. “He and I did everything together the last 34 years. He was the man I admired and respected and loved the most in this world.”

Jay’s sister, Jennie Rasmussen, expressed her own love for her dad.

“He was a mountain of a man,” Rasmussen said. “He was a man of integrity and he was honest and hardworking and he always tried to follow the Golden Rule—Do unto others as you would have them do unto you.”

“For someone to bring someone else’s children into his own life and give them as much love and a wonderful home and compassion and everything that any child would want—that takes a special kind of person,” Jay Nitz said.

“We hit the parental lottery, because we couldn’t have had better parents. God really blessed Jay and I to have the amazing parents we had,” Jennie said.

He was born on his family’s farm west of Cedar Bluffs in 1936.

Nitz was involved in 4-H and showing Guernsey cattle and was a herdsman for the Roberts Dairy show herd. He showed at Ak-Sar-Ben and other events.

In 1956, Nitz married the love of his life, Delores Kavan, and they farmed together.

Joe Nitz had wanted his son to be a dairy and row crop farmer.

But when his dad died in 1962, Jack Nitz took what his daughter describes as a “Leap of Faith” with his great friend, Willis Armbrust.

He’d become friends with Armbrust, who had a Holstein herd, when the two were showing cattle.

After his dad’s death, Nitz — who’d long been intrigued by the auction business — figured this was his opportunity to take a chance and go to auction school.

So Nitz and Armbrust went to The Reisch American School of Auctioneering in Mason City, Iowa.

Nitz began to promote his work as an auctioneer. He and his wife would sell the Guernsey herd and embark on running their full-time auction company, Jack Nitz & Associates.

He would be involved in farm, dairy and household auctions, Rasmussen said.

“Willis and my dad worked together for years in the Midwest doing dairy auctions,” Rasmussen said. “They’d literally roll onto a farm place and set up a tent.”

They’d be there four or five days before the auction, setting up all the gates and chutes and determining which cow would go first.

“They wanted to set the tone for the sale. You want to build the crowd and build some momentum. They did that all over the Midwest,” she said.

Dairy auctions were prevalent until Rasmussen was in her early teens. Her dad would transition into farm equipment and real estate sales in about the 1970s, she said.

At the same time, he was farming the family’s land.

Nitz was busy helping not only strangers, but friends and neighbors who were having to sell out.

He even sold some of his own equipment to keep a promise to his father that he’d never mortgage the farm. Nitz and his son worked together to keep things going on the farm.

The Nitzes also embarked on another endeavor.

Jay’s wife, Vicki, came to work for the business in 1994 as a clerk and cashier. When Delores retired in 2001, Vicki became head cashier.

In 2003, Jack and Delores handed the torch to Jay.

Yet Jack Nitz remained as chairman of the board until his death.

More than 20 years ago, he also founded Nitz Equipment LLC, selling trailers and flatbeds. Jennie is in charge of that now.

Besides enjoying his children, Rasmussen was a big fan of his grandchildren—Courtney and Justin Nitz and Piper and Jeremy Rasmussen.

“His grandkids were his everything,” Jennie Rasmussen said.

Longtime friend Rick Myers recalls the love Nitz had for his wife and family and loyalty to his friends.

“He was married for more than 50 years to Delores and after she died he made weekly trips for the last six years to her gravesite to make sure that the fresh flowers and plants that he put there got watered,” Myers said. “On her birthday, he showed up to sing ‘Happy Birthday.’ His whole life was a love story for his wife and his family.”

Myers has a special description of Nitz’s friendship.

“I’ve described Jack as the kind of friend who would give you the shirt off his back—and then he’d give you his back,” Myers said.

In the wake of 2019 flooding, Myers’ acreage was covered in flood water.

And with it came tons of cornstalks, boats, propane and gasoline tanks and a cistern.

“Anything that could float came into my place,” Myers said.

Myers’ friends Ron Giesselmann and Jack Nitz showed up with tractors and loaders and helped him clear all the junk off his property.

“I knew of no person that ever met Jack or knew him who ever had anything bad to say about him,” Myers said. “In business and in life, generally, everybody I know without exception respected Jack as the most honest man they ever met.”

Myers tells of times when he and Nitz would go to a little restaurant in the small Saunders County town of Abie on Friday nights.

“There’d be 30 or 40 farmers from the area. Everybody would say, ‘Hi Jack. Good to see ya.’ They knew him and they all loved him just because he was outgoing, friendly and just the nicest guy you could ever imagine,” Myers said.

Myers notes the loss that many will experience.

“He was a giant of a man,” Myers said. “He leaves a big hole in everybody’s life.”

The Nitzes already have begun to miss their dad.

Public visitation with family will be from 1-5 p.m. Nov. 8 at Ludvigsen Mortuary in Fremont. The private family service will be on Nov. 9.

Linda McCauley explains it as well as anyone.

About 20 years ago, Shari Strong was diagnosed with depression and anxiety.

Outdoor event planned at May Museum

Jeff Kappeler hopes an event at May Museum could bring a little light to what could be a dark time.

The Hooper American Legion Auxiliary will be hosting its annual Christmas Revisited sale from 8 a.m. to 1 p.m. Saturday, Nov. 7, at the Hooper…

Donna Meyers can’t recall how many times she’s been a poll worker.

Throughout the COVID-19 pandemic, the Fremont Area United Way’s ability to fundraise in the community has still been able to continue.

A fan of comic books with his friend Jim Rosenbach, Deryl Skelton said their enthusiasm wasn’t too commonplace in the 1960s and 1970s.

Helping kids one box at a time

Amid recent elections and COVID-19, area residents may not be thinking about Operation Christmas Child.

St. Matthew Lutheran Church in Cedar Bluffs will be having its annual turkey supper on Saturday, Nov. 14.

Midland University Arts has released a virtual version of its fall choir concert.

Jennie Rasmussen and her brother, Jay Nitz, stand behind their dad, Jack Nitz, who founded Jack Nitz & Associates years ago with his wife and their mother, Delores. Jack Nitz, a longtime businessman and community volunteer, died Oct. 31. He was 84.