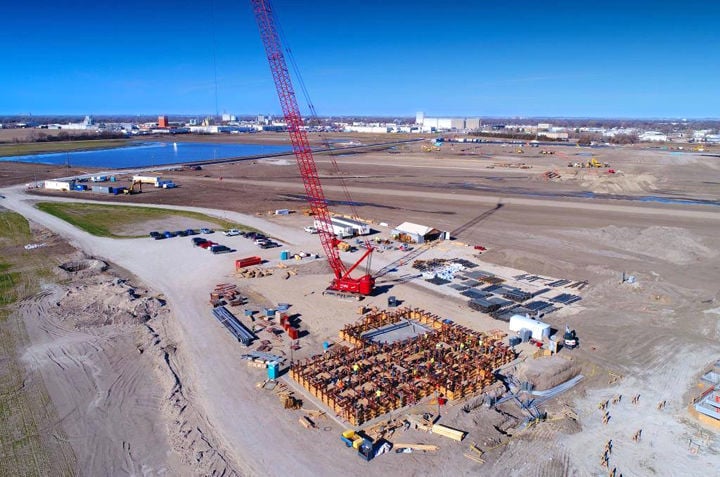 In November, work started on the 160-foot feed mill, the first major structure erected on the 414-acre plot of land where the Costco/Lincoln Premium Poultry processing facility is in the process of being built. 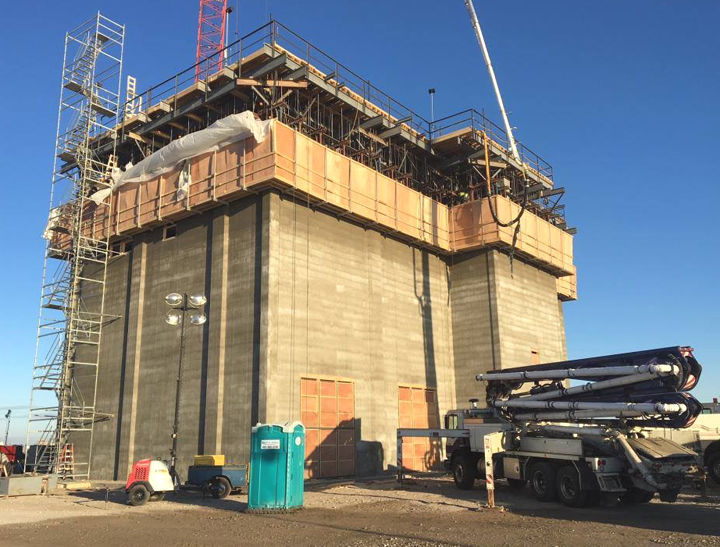 In November and December 2017, the 160-foot feed mill was erected on the property of the Costco/Lincoln Premium Poultry processing facility. 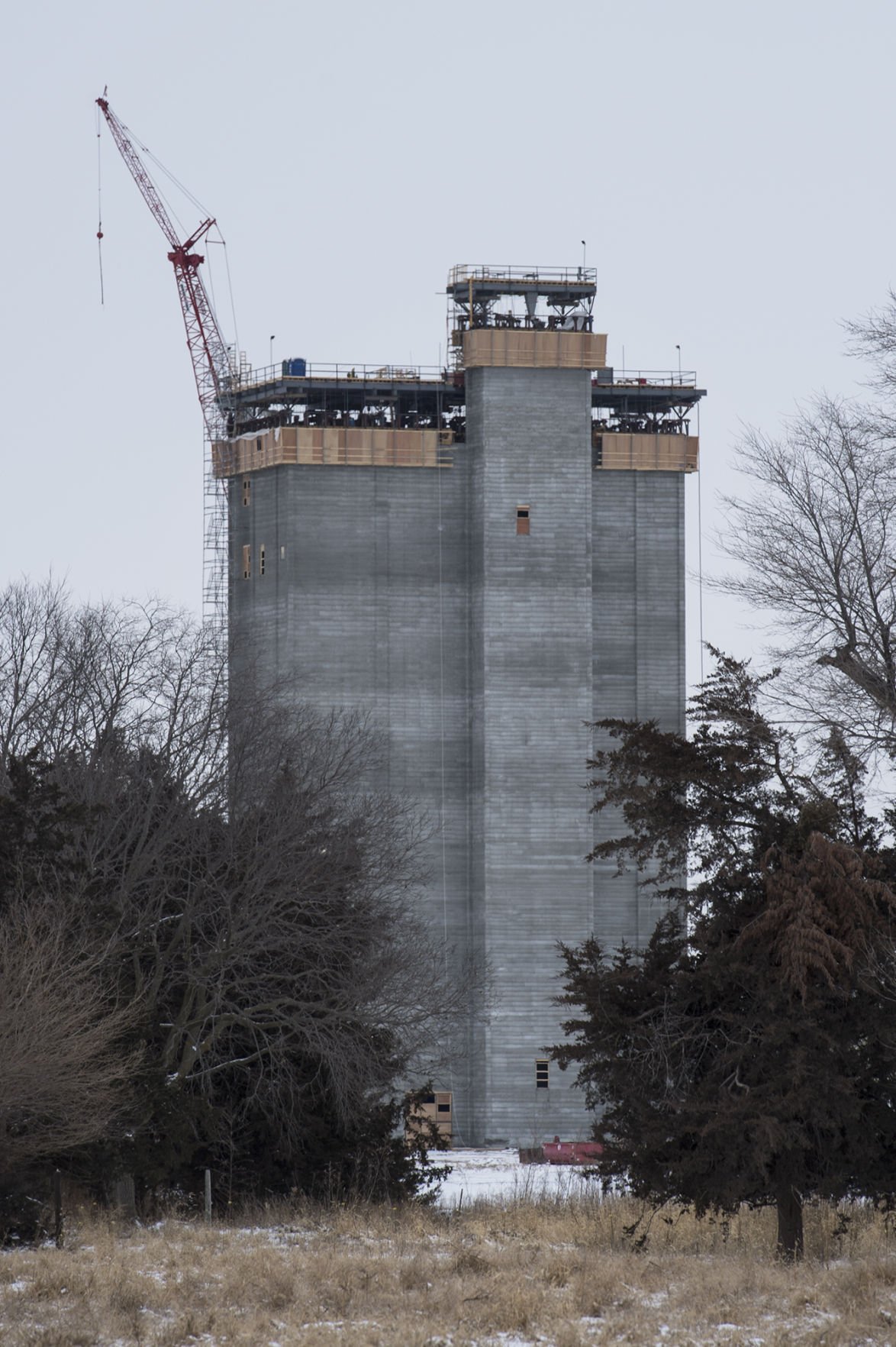 Lincoln Premium Poultry’s feed mill is under construction near Fremont. It is part of a poultry processing complex that will include a hatchery and a processing plant.

After R&R Christo Construction landed a contract to do work for Costco and Lincoln Premium Poultry’s incoming chicken operation, the company decided to make a move.

It recently opened its new corporate headquarters here in town, on old Highway 275. The move was meant to bring it closer to its new work installing equipment in the chicken barns expected to pop up in the region — the eventual suppliers for Costco’s new Fremont poultry plant.

“Just the size of the Costco project warranted us having our headquarters here,” said R&R’s owner, Randy Christo.

With the headquarters would come jobs. About a hundred of them, Christo said, with the company seeking to hire as much local labor as possible. But at this point, with 30 to 40 percent of those positions filled, Christo said, the local labor pool has come up empty.

“We go through our attorney and we do job searches before we bring in our own people. We advertised in the paper and everything for three weeks in a row,” Christo said. “There’s no people to work. Nobody responds. I can’t beg them to come to work.”

As unemployment rates continue to drop nationwide, local companies are feeling the constraints of a tightening labor market, according to interviews with multiple experts, area contractors and local officials.

It’s a sign of a growing economy, a generally positive economic development spurred on by decreased regulations and increased investment that’s gobbling up qualified workers, experts say. But it also presents challenges for employers. And while it’s happening nationwide, there are signs that northeast Nebraska may be especially vulnerable.

A Creighton University business survey released this month found that 53 percent of businesses in a region covering nine states, including Nebraska, indicated that finding and hiring qualified workers is the greatest 2018 challenge that they are facing.

“What companies are going to have to do is draw from a wider radius of workers,” said Ernie Goss, the Creighton University economist who oversaw the survey. “It’s probably tighter in (northeast Nebraska) than the rest of Nebraska, and Nebraska is tighter than the rest of the nation.”

The reasons for the tightening labor market are plentiful, Goss argues. The recent tax cuts passed by Congress and backed by the Trump Administration have bolstered growth, along with increased government spending. Regulations have been cut back. Wage growth, so far, hasn’t been as strong as hoped, which can make it harder to attract workers, who have seen an increase in job opportunities.

Fields like construction have been hit particularly hard, Goss said, in part because many who lost jobs during the 2008 economic downturn haven’t returned to the workforce, either finding jobs in more stable industries or retiring. Here in Nebraska, the eastern part of the state has seen more economic growth than others, and the unemployment rate is lower than the national average.

The national unemployment rate sits at 3.8 percent, according to the most recent numbers. Nebraska’s is a full percentage point below that at 2.8 percent, and numbers from the Bureau of Labor Statistics put Dodge County at the same number.

“For quite some time, (labor shortages) have been an issue in northeast Nebraska, but also in the greater Fremont area,” said Garry Clark, executive director of the Greater Fremont Development Council. “Definitely it’s about population. That would be the primary key to that. But it’s about wages and also about transportation.”

The higher demand for work allows workers to be more selective, and thus less willing to take a job with a long commute or a lower wage, Clark said.

“We’re starting to see locally that there’s a shift in starting wages, and that’s a positive opportunity for us to create more interest in our local pool of jobs that are available,” he added.

Additionally, the GFDC has been working on a “Talent Readiness Initiative,” which aims to increase training opportunities for the underemployed in order to create more qualified workers.

For now, however, labor shortages are playing out in the construction of the new Costco Plant, according to Jessica Kolterman, who is in charge of external affairs for Lincoln Premium Poultry.

Each day, around 200 people are onsite at the incoming plant, a large swathe of workers who come from a variety of companies. And while attempts have been made to hire locally, Kolterman said, the labor supply has been limited.

“I can tell you that finding qualified construction workers and skilled labor has been difficult in the current low unemployment climate that we are facing,” Kolterman said. “The goal is to hire as much local labor as they possibly can. And they’ve continued to advertise extensively.”

She added that skilled and qualified individuals looking for work at the project can go through their union hall or, if they are non-union, can find ads in the local paper.

Several other contractors involved in building the chicken barns associated with the project also told the Tribune that they were encountering local labor shortages.

Outside the project, too, local companies have reported issues.

The local trash hauling company S2 Roll-Offs and Refuse said it’s had to increase prices in recent years to accommodate increased wages meant to keep its qualified labor force — and that’s been an issue across the industry, said Nate Williams of S2.

“With increased demand, without increased capacity of labor and new companies coming in, you will always find an increase in prices until you have more capacity in the community to meet that demand,” Williams said “We need to make a compelling story as a community for why people should come here.”

There have been some exceptions. That includes the Iowa-based Vision Electric, who also recently opened a branch in Fremont after getting the contract to do electrical work in all the chicken barn sites for Lincoln Premium Poultry.

Mike Blanchard, the company’s owner, expects to hire between 20 and 60 electricians over the next few years — and thinks nearly all of them will be local.

“Our employees are more of a trained employee base, so they’re not so much just a general labor base,” Blanchard said. “We send them through apprenticeship schooling, so we can hire a huge portion of these people as entry level positions and train them and make electricians out of them.”

Meanwhile, while available labor has tightened, the amount of work in the region has continued to rise, thinning contractors’ availability and, in some cases, driving up their asking prices, Fremont officials say.

One planned city project, for instance, to do renovations on Mayfair Avenue was recently delayed until next year after the city received only one bid for the project and found it to be higher than estimated, Public Works Director Dave Goedeken told the Tribune in May.

But, while labor shortages create unique challenges, the city sees it as a positive sign.

“This is a good problem to have — it means Fremont is growing,” said City Administrator Brian Newton.

Indeed, workers’ low availability is a sign that the economy is in a strong position —what Goss from Creighton called a “Goldilocks” economy — not too hot, not too cold, but right in the middle. It puts workers in the driver’s seat, and in the long run, should drive up wages as companies seek to attract more labor. And barring trade wars or increased inflation that would push up interest rates, it should continue, Goss said.

“When it begins increasing the wages, and it hasn’t yet, it’s going to of course, pinch the margins and the profitability of the companies and also push up interest rates,” Goss said. “Right now it’s mostly good. I’ll call it a Goldilocks economy, but it’s getting warmer, and it could get hot.”

The 23rd Street Corridor is growing again as another national chain will open its doors near the U.S. Highway 30 and U.S. Highway 275 intercha…

The Nye Alzheimer's Support Group meets from 2-3 p.m. the fourth Wednesday of each month at the Nye Square Wellness Center, 650 W. 23rd St., i…

Fremont area residents who may be looking to welcome a new furry friend into the family will have two opportunities to adopt pets on Saturday.

The city of Fremont, along with Sawyer Construction Co., has started its 2018 Pavement Rehab Project, beginning work on one of four corridors …

In November, work started on the 160-foot feed mill, the first major structure erected on the 414-acre plot of land where the Costco/Lincoln Premium Poultry processing facility is in the process of being built.

In November and December 2017, the 160-foot feed mill was erected on the property of the Costco/Lincoln Premium Poultry processing facility.

Lincoln Premium Poultry’s feed mill is under construction near Fremont. It is part of a poultry processing complex that will include a hatchery and a processing plant.