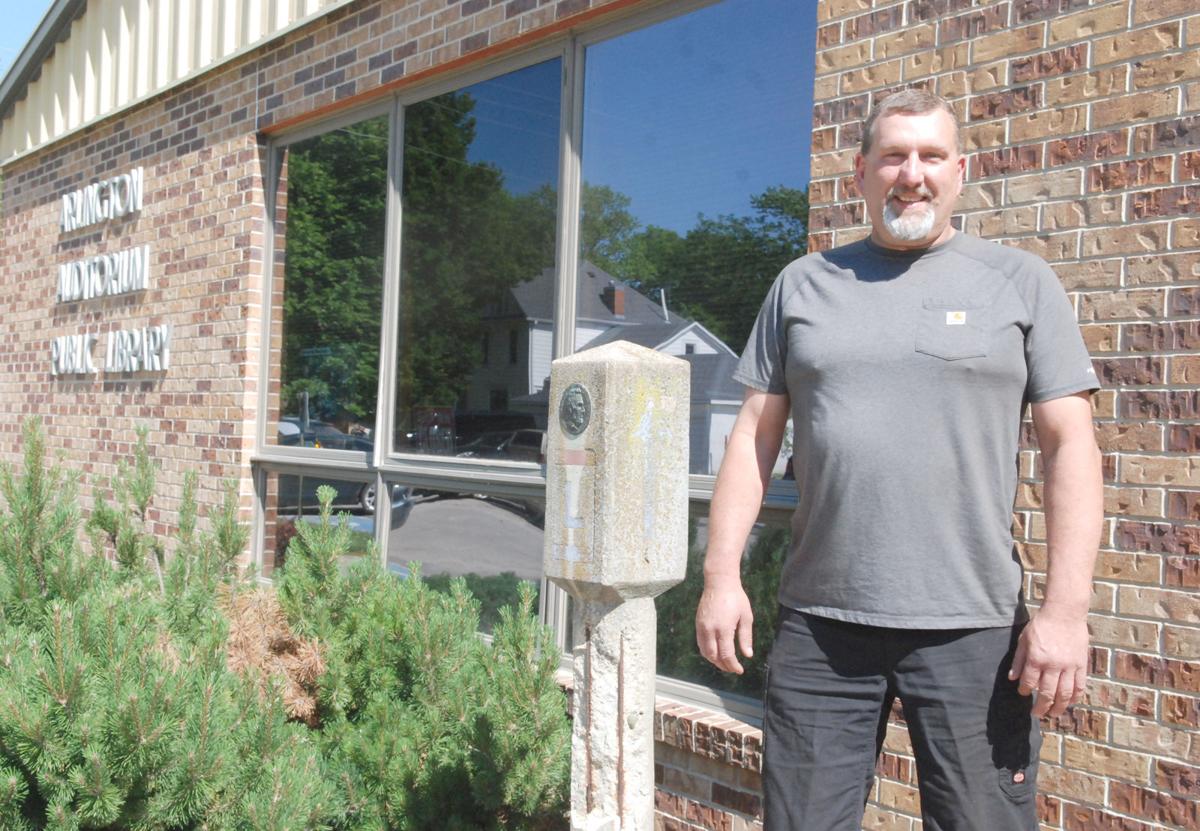 Paul Krause, village chairman in Arlington, stands by a Lincoln Highway marker near the town's public auditorium and library. Lincoln Highway is now known as U.S. Highway 30. The roadway between Arlington and Fremont is set to reopen by Saturday after a portion of it was washed out by mid-March flooding. 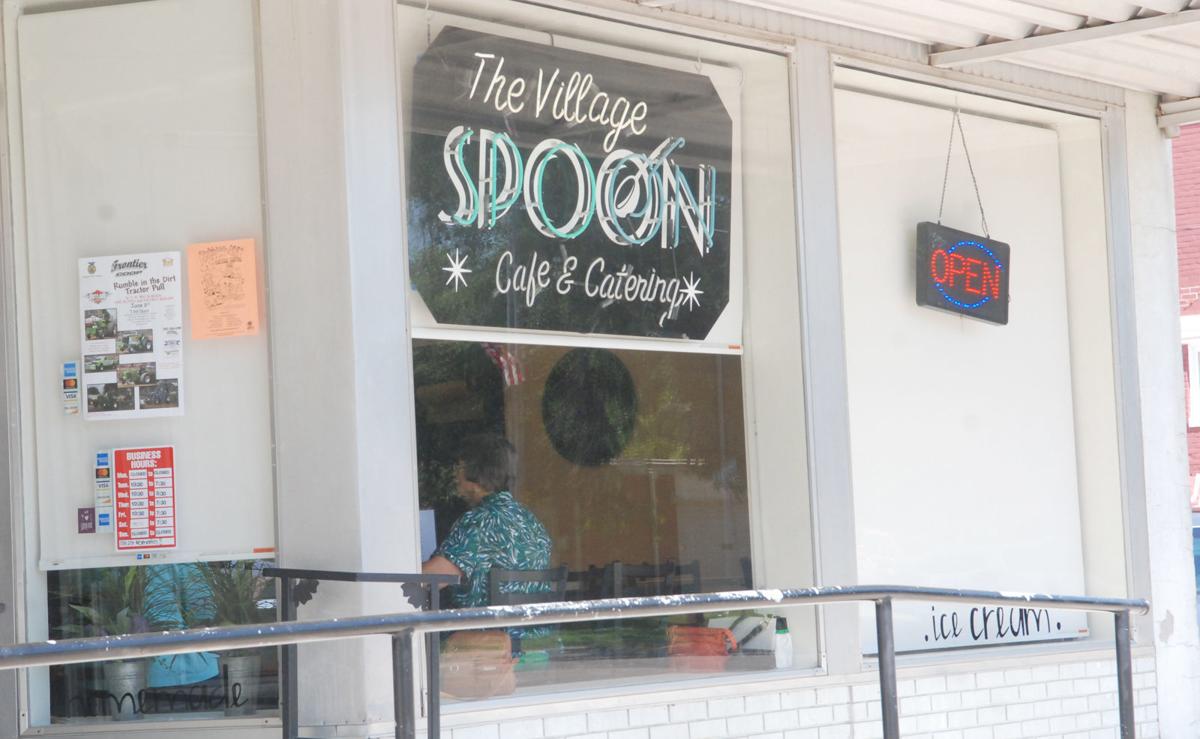 Arlington Village Chairman Paul Krause said he's been concerned that the washed out U.S. Highway 30 between his town and Fremont has affected Erika's Village Spoon, which opened in January.

Paul Krause, village chairman in Arlington, stands by a Lincoln Highway marker near the town's public auditorium and library. Lincoln Highway is now known as U.S. Highway 30. The roadway between Arlington and Fremont is set to reopen by Saturday after a portion of it was washed out by mid-March flooding.

Arlington Village Chairman Paul Krause said he's been concerned that the washed out U.S. Highway 30 between his town and Fremont has affected Erika's Village Spoon, which opened in January.

A big smile spreads across Paul Krause’s face when he thinks about U.S. Highway 30 reopening west of Arlington.

Earlier this week, officials with the Nebraska Department of Transportation announced plans to reopen the highway that links the village to Fremont after mid-March flooding washed away a large section of the asphalt road.

The highway was scheduled to be reopened by today.

On Thursday, Krause was clearly pleased by the news — and he wasn’t the only one.

“I think there’s going to be a lot of people doing a celebration drive on Highway 30 on Saturday,” he said.

The roadway closure caused more than a few challenges for people in Arlington and other communities.

Whereas a trip from Fremont to Arlington typically takes about 10 minutes, it took at least 30 minutes as motorists traveled up U.S. 275 to Nebraska Highway 36 to Highway 31 and then back to Highway 30, entering Arlington from the east.

The trip could be shortened slightly if motorists used what’s known as the old Marshall Nursery road, but even that trek was longer than before, especially with the traffic.

Most Arlington residents have been affected by having to drive farther to get supplies.

“A lot of our businesses work with places in Fremont,” Krause added. “Instead of a quick trip, it’s a 30-minute-around trip.”

Laurie Thompson, manager of the Quik Pik in Arlington, can relate.

“That’s like two hours of my life I get back that I’m not driving,” she said of the prospective roadway opening.

Thompson goes to Fremont to get supplies like sandwiches from a restaurant and doughnuts from a bakery, both of which stopped delivering to Arlington after the road was washed out. She goes to a bank in Fremont as well.

Krause believes convenience stores probably saw less business from travelers coming through, but sold more grocery items — and even gas — to Arlington residents who didn’t want to make the half-hour trip to Fremont.

Arlington residents, who live west of the where the road washed out, and truckers haven’t been coming to the convenience store and gas station, she said.

But Arlington residents east of where the roadway washed out have come to the business for needed items.

“Not a lot of people will drive the extra miles to go to Fremont for bread, milk — the necessities,” Thompson noted.

Local residents also have bought more gas here — balancing out what hasn’t been purchased by people coming through town.

That said, Thompson has been eager to see the road reopen.

“I just can’t wait,” Thompson said. “It’s been quite an experience.”

As for other businesses, Krause said he has been concerned about Erika’s Village Spoon, the town’s sole restaurant.

“She’s in the early stages of her business and I worry that lack of traffic probably hasn’t helped her business,” Krause said. “I hope she’ll do better when the road reopens.”

Businesses haven’t been the only places affected by the roadway washout.

Schools also were affected, too.

“We have kids who option into our schools from Fremont,” he said.

Before the section of highway was washed out, the school would send a bus to the Menards parking lot in Fremont.

“After the road closed, a few more people were on that side of the river, so they added another bus — and instead of a quick trip to Fremont, they were going all the way around to Highway 36 — which I’m sure affected their budget,” Krause said. “There was a lot more time and gas involved and strain on drivers.”

Normally, the trip to Fremont and back would be about 20 minutes — but that stretched into an hour at least.

Krause noted that the longer drive had residents trying to plan their trips, finding the closest place to get what they needed, and that motorists had added expense with the longer drives.

He also heard of more people going to Blair to get groceries or to go out for supper.

Besides shorter trips, Arlington residents should see other benefits with the highway reopening.

“I think there’ll be more traffic going through town — probably fewer semi-trailers turning around on the highway,” he said. “You’d be surprised how many semis are being led here by their GPS and having to turn around and go back because they didn’t know the highway was closed.”

Krause doesn’t know if this has posed a danger, but a light pole was knocked over.

There have been tire tracks in yards.

“I can’t, for sure, attribute those to somebody being lost, but it seems like there may be a connection,” he said.

Hopefully, Fremonters will be able to make a trip to Arlington soon. The road will be open for events in town, including the Washington County Fair at the end of July.

And for people like Krause and Thompson the open road will mean a shorter trip to Fremont.

“You don’t realize how important it really is,” Thompson said.

This year, the Midsummer Festival at Elim Lutheran Church will have a western flair.