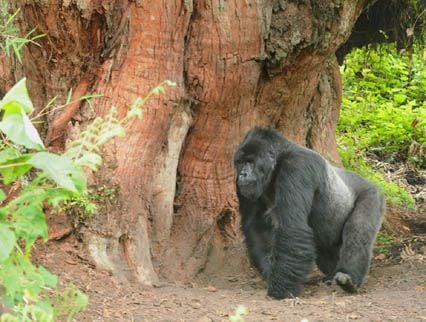 A large silverback mountain gorilla passes a tree in the Volcanoes National Park in Rwanda. Mountain gorillas are on the critically endangered species list, with only approximately 700 remaining in the wild. (Dean Jacobs, Fremont Tribune) 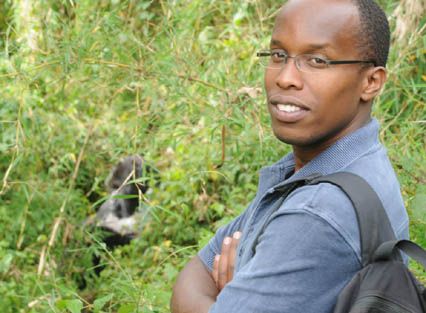 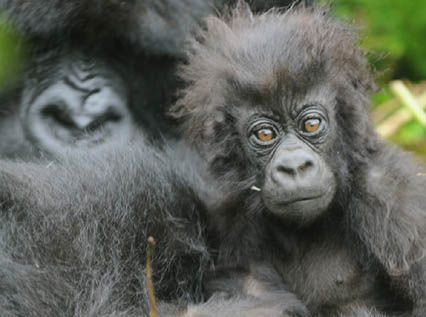 An infant mountain gorilla pauses from its activities to check out the visitors to the group in the Vocanoes National Park in Rwanda.(Dean Jacobs, Fremont Tribune) 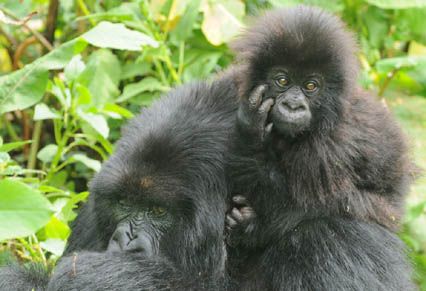 A mountain gorilla infant sits propped up on her mother’s shoulder as she feeds on nettles in the Volcanoes National Park in Rwanda. (Dean Jacobs, Fremont Tribune) 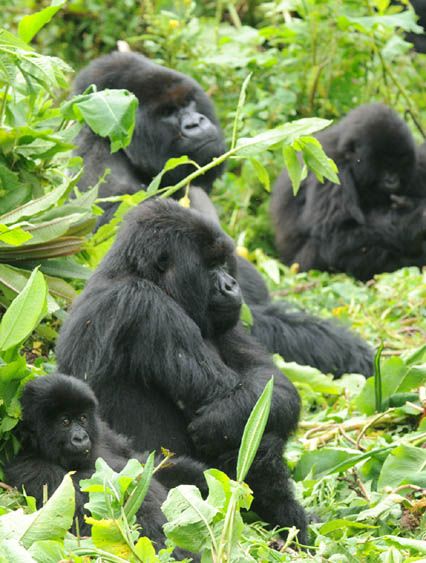 Members of the Pablo group, the largest mountain gorilla group to be followed by the Karisoke researchers, soak up some sun in the Volcanoes National Park in Rwanda.(Dean Jacobs, Fremont Tribune)

From the mountains of Rwanda Africa.

It wasn’t that long ago when I was walking down red cobblestone streets, exploring the communities in Dodge County. Those days seem like a distant past as I scramble up the sides of dense green covered volcanoes through dark thick mud that sometimes goes up to my calf as I track mountain gorillas in Rwanda, Africa.

“Do you think it will rain today?” I ask Felix Ndagijimana, a Rwandan who serves as the deputy director at the Karisoke Research Center.

I already know the answer, given the fact we are hiking through a rain forest. A wager is made that it won’t rain before we leave the forest.

“How do you define rain?” Felix asks with a smile as a drop of water falls from the sky.

Determined not to make it too easy, I reply, “If you have to put on a jacket to stay dry, it’s rain.”

This playful game is repeated each time Felix and I enter the Volcanoes National Park, home to approximately

300 mountain gorillas in Rwanda. They say “approximately” because the park shares international borders with Uganda and the Democratic Republic of the Congo, which is home to another 400 mountain gorillas. Gorillas don’t recognize invisible lines and they wander where they wish.

Karisoke is the name given to the research center by Dian Fossey. It was Fossey who started 40 years ago studying the endangered mountain gorillas. The name was created from the two volcanoes that sat on each side of the original research site: Karisimbi and Bisoke. It is largely to her early efforts the gorillas have survived to this day, and they are the only wild primate with the distinction of increasing in population. This is no small feat, considering where they live and what they have endured.

Just as impressive is the staff that continues Fossey’s work today for the Dian Fossey Gorilla Fund International at Karisoke.

“Time to leave the escort and porters,” said Felix as we approach the group of gorillas to be monitored today.

The research center follows eight separate groups of gorillas totaling 120 gorillas through the park each day. Although they are habituated, which means they are used to the presence of humans stumbling around their environment, only the Karisoke staff and researchers follow these gorillas. The remaining gorillas in the park are followed by the national park authorities for the main purpose of tourism. People spend $500 for the privilege of spending an hour with the gorillas.

“We must announce our arrival to the group, so they know we are not a threat,” said Felix as he begins a deep throated “haaaaummmm” sound. I give it my best shot, but it is obvious that we are short of mountain gorillas in Nebraska by the smile Felix gives me at my attempt. I continue on, if nothing else to provide some entertainment to our hosts. I listen to the gorillas respond with a similar sound. “This is a vocalization that indicates we mean no harm. It has the same meaning when they vocalize it to other gorillas,” Felix said.

It was Dian Fossey who first recorded and documented all the sounds and behaviors of the gorillas that are used today to communicate with them in instances like this.

During the next four hours, Felix and I watch gorillas. He records information about the various behaviors of the gorillas, noting things like who sits next to whom, how close or how far they stay from the dominant silverback and what types of vocalizations they give to each other. Felix understands each movement or sound as he explains things about the gorillas as if each was his own family member. He has spent hundreds of hours with the gorillas and knows them well.

Each day a mountain gorilla will consume 40 to 50 pounds of organic materials, eating leaves, roots, vines and stems of more than 200 different types of plants in the Volcanoes National Park. A particular favorite is nettles; the gorilla strips the leaves off the stem and stuffs them in its hands and chumps away. I tend to regret the days we find gorillas in the nettles and we wade through large green patches. They don’t call them stinging nettles for nothing. One day in particular was so bad that I wondered if my arms were about to fall off. It was well into the night before the irritating pain subsided.

The four hours pass quickly and soon we must begin our trek out of the park and head for home. Walking home, Felix explains to me the purpose of studying the gorillas so closely. “If we can understand their behaviors and how changes affect them in the environment, we can create scenario models that will enable us to predict the future.”

The future of the mountain gorillas rests in the hands of three African countries: DRC, Uganda and Rwanda. The more stable these countries’ environments become, the better chance the last remaining mountain gorillas will be around for future generations to admire.

Dean Jacobs is a former Fremont Tribune photographer and now world traveler. More information about his current work with the Dian Fossey Gorilla Fund International can be found at www.travel4life.org.

A 'Snow Moon' may be the reason you're having trouble sleeping

Former Dodge County Sheriffs Deputy Craig Harbaugh was found dead at his home in Fremont on Thursday, according to a press release from the Do…

At approximately 4 p.m., July 28, Lashay Aguilar, 21, of Fremont was arrested on an outstanding Dodge County arrest warrant in the 200 block o…

Various Fremont schools, organizations and governmental entities have announced new protocols in response to the COVID-19 pandemic and its Del…

At approximately 6:20 p.m., July 27, Veronica M. Derojo, 49, of Fremont was arrested on suspicion of driving with a suspended license followin…

The Fur Shack planning fundraiser event in aftermath of fire

A large silverback mountain gorilla passes a tree in the Volcanoes National Park in Rwanda. Mountain gorillas are on the critically endangered species list, with only approximately 700 remaining in the wild. (Dean Jacobs, Fremont Tribune)

An infant mountain gorilla pauses from its activities to check out the visitors to the group in the Vocanoes National Park in Rwanda.(Dean Jacobs, Fremont Tribune)

A mountain gorilla infant sits propped up on her mother’s shoulder as she feeds on nettles in the Volcanoes National Park in Rwanda. (Dean Jacobs, Fremont Tribune)

Members of the Pablo group, the largest mountain gorilla group to be followed by the Karisoke researchers, soak up some sun in the Volcanoes National Park in Rwanda.(Dean Jacobs, Fremont Tribune)
© Copyright 2021 Fremont Tribune, 135 N. Main St. Fremont, NE | Terms of Use | Privacy Policy
Powered by BLOX Content Management System from TownNews.com.
You don't have any notifications.