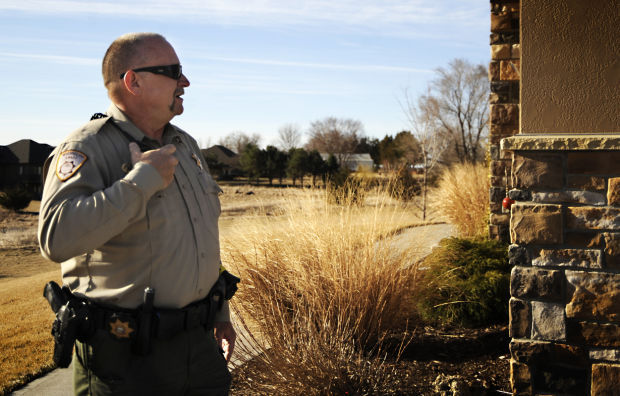 Woodcliff Chief of Security George Wolsleben communicates with Saunders County dispatch while responding to an alarm Tuesday at a home in Pawnee Meadows. Wolsleben was named the 2014 Nebraska Boating Law Enforcement Officer of the Year by the National Association of Boating Law Administrators. 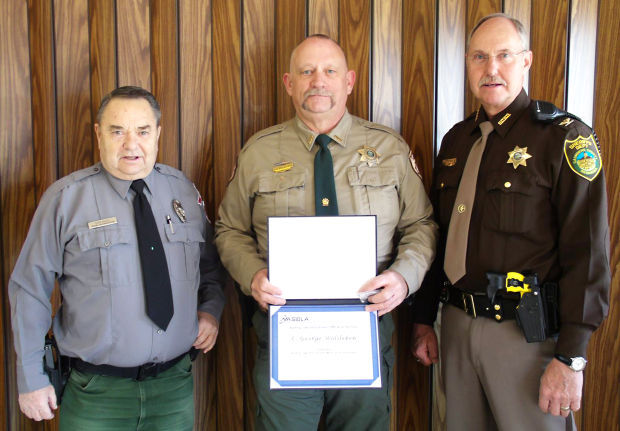 Approaching the scene of a burglary with his patrol vehicle blacked out, Woodcliff Chief of Security George Wolsleben spotted the suspects about 100 yards away as they left the victim’s residence, got into their car and began driving directly toward Wolsleben. The two vehicles were about 30 feet away when Wolsleben engaged his police lights, bringing the suspects’ vehicle to a screeching halt.

The suspects fled the vehicle, and as Wolsleben began a foot pursuit he heard footsteps approaching from behind. Relying on his years of training in law enforcement, Wolsleben took down the approaching suspect and held him in custody until back up arrived from Dodge and Saunders counties.

Before long Wolsleben and sheriff’s deputies located three additional suspects still on the grounds of the Saunders County lake community hiding inside a boat. He later learned the suspects apprehended that July night were connected to two prior arrests at Woodcliff.

The arrests made that night not only helped solve the Woodcliff burglary case, but helped law enforcement identify a burglary ring consisting of eight Omaha-area suspects who were believed to be behind a number of crimes in several Nebraska counties. So far seven arrests have been made in connection to the case, and Wolsleben is confident there will be one more before the case is cleared.

On March 8, Wolsleben was presented with an award naming him the 2014 Boating Law Enforcement Officer of the year for the state of Nebraska. The award, presented by the National Association of Boating Law Administrators, is presented to one officer in each state.

Wolsleben was presented with the award for his knowledge and experience in law enforcement, including 34 years in the field, 18 of which have been as chief of security at Woodcliff and as a Saunders County sheriff’s deputy. In his time at Woodcliff, Wolsleben has remained dedicated to educating and preventing boating related accidents and fatalities.

During the presentation of the award, Nebraska Boating Law Administrator Herb Angel recognized Wolsleben for his response to a 2013 investigation of a fatal boating accident at Woodcliff. Angel noted when the Nebraska Game and Parks Officers arrived to investigate the accident, they learned Wolsleben already had completed the work. The investigation led to a conviction.

Wolsleben said it was an honor to be recognized.

“It’s an honor, but I don’t do this for awards,” he said. “There are rewards to doing it. Just being able to help people, with boating accidents you’re able to help people and we get a fair number of rescue calls down here in the summer.”

A native of Broken Bow, Wolsleben began his career in law enforce in 1981 as an MP in the U.S. Army. He served for 16 years as a sheriff’s deputy in Wyoming. Wolsleben said that department’s jurisdiction included a part of the state that was home to several mines and oil fields, and with that came a fair amount of crime -- including homicide investigations.

In 1997 Wolsleben returned to Nebraska with the intention of retiring from law enforcement and taking the part time position as chief of security at Woodcliff. He said he quickly learned that keeping the lake community safe is not part time, but involves 20 hour days from May to September, and 16 hour days during the winter months.

During the winter months, the population of Woodcliff sits around 1,200 people. That number doubles during the summer and can reach as many as 5,000 during summer weekends. On holiday weekends, such as the Fourth of July, the community’s population swells to about 15,000, said Wolsleben.

To help beef up the security force and keep everyone safe, Wolsleben brings in about 10 part time officers from the Fremont Police Department, Nebraska State Patrol and Dodge and Saunders county sheriff’s departments.

Wolsleben teaches three boater safety courses at the Woodcliff Marina the first three Saturdays in May. He said he recommends the course to anyone who might have a remote chance of operating a boat because it can make a difference.

“I think it has made a huge difference in injuries and fatalities in Nebraska,” he said. “I think everybody should take the boater safety course number one, I think it should be mandatory.

The State of Nebraska Boater’s Safety Course will be held from 9 a.m. to 3 p.m. May 2, 9 and 16 at the Woodcliff Marina. The cost of the course is $10 and is open to anyone interested in completing the course. Pre-registration is not required, but potential attendees are encouraged to contact Wolsleben at 402-721-3000 in order to plan for class sizes.

A driver was transported to a local hospital with non-life threatening injuries after a one-vehicle accident on Military Avenue in Fremont.

At approximately 12:25 a.m. April 11, Andrew R. Christensen, 32, of Fremont was arrested on suspicion of third degree assault and disorderly c…

At approximately 3:30 a.m., April 11, Tomas M. Montejo, 20, of Fremont was arrested on suspicion of driving while under the influence of alcoh…

The Nebraska Game and Parks Commission confirmed the third instance in 20 years of a gray wolf’s presence in the state of Nebraska Wednesday.

CASA of the Midlands advocates sworn in during Tuesday ceremony

Four volunteers have taken the step to become advocates for neglected and abused children in Dodge County.

Woodcliff Chief of Security George Wolsleben communicates with Saunders County dispatch while responding to an alarm Tuesday at a home in Pawnee Meadows. Wolsleben was named the 2014 Nebraska Boating Law Enforcement Officer of the Year by the National Association of Boating Law Administrators.