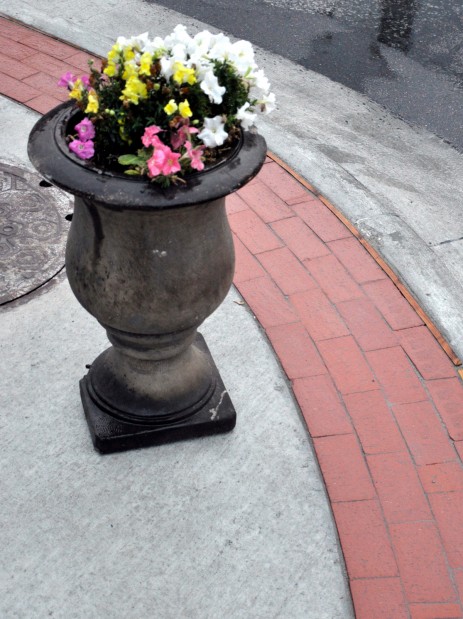 Planters and new sidewalks now adorn the downtown area as part of a plan to revitalize the area. Other components include facade repairs and upgrades, trees and more. (Tribune Files) 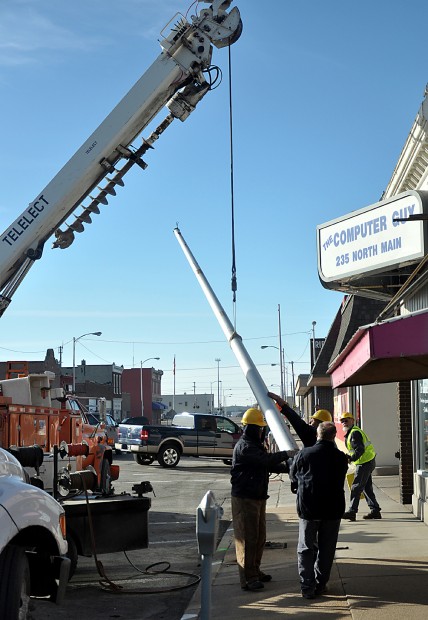 Workers with the Department of Utilities take down a large light pole in the 200 block of North Main Street in March. Lighting is one of several components that have been discussed over the years regarding downtown revitalization. (Tribune Files) 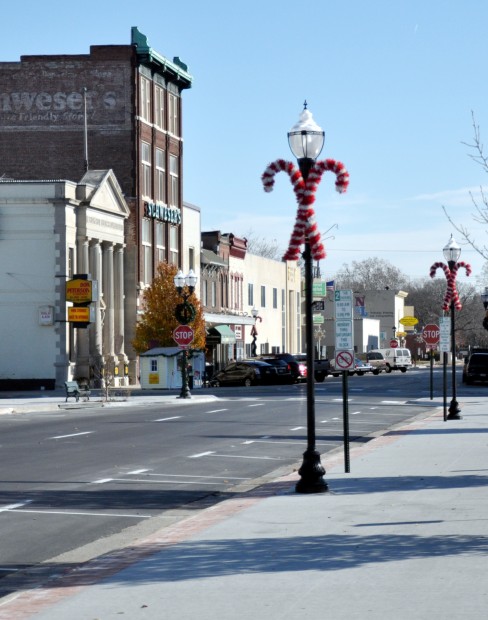 The downtown area has experienced many revitalization plans that have included items such as new lights, sidewalks and streets all of which have seen progress this year. (Chris Bristol, Fremont Tribune)

Developing upper level housing in downtown is a top priority.

"Upper levels of buildings are a major reservoir for development, but currently exhibit relatively low use," said a 1998 MainStreet of Fremont report prepared by RDG Crose Gardner Shukert. "These upper levels are an economic drain on property owners if undeveloped."

A few downtown residential apartments have been developed, and the former power plant, just a few blocks from the heart of downtown, was converted into an apartment building. Tax credits were part of the financial picture for the $5 million Power House Apartments project.

There are still plenty of vacant upper floors in the downtown area, however, and downtown business owners continue to search for ways to make that space productive.

Many concerns have been common in the past, such as creating entertainment and public gathering venues to make the downtown district more of an evening destination, and restoring historic facades.

The city recently completed a street and sidewalk project, addressing concerns raised in past revitalization plans.

The first two phases of a project to replace streetlights to better reflect downtown's historic nature have been completed, with the third and final phase set for next year.

MainStreet spearheaded that effort, with the city contributing in-kind services. It was helped by a grant from the Nebraska Department of Roads through the federal Transportation Enhancement Program.

Availability of funding helped determined much of what's been accomplished, and some things that have yet to find their way to a drawing board.

As recently as Aug. 30, the city council approved a resolution declaring the downtown area as blighted and substandard, the first step toward providing tax increment financing as a redevelopment incentive.

About a year ago, the Department of Economic Development broadened the list of communities eligible for funds through its Downtown Revitalization Program. Previously restricted to cities with less than 20,000 population, the field is now open to cities of less than 50,000 population.

"For the cities in Nebraska that qualified for the Comprehensive Revitalization Program, it opened up an additional pool of money in downtown revitalization funding," Administrative Services Director Jan Rise said.

The project under way now, using Community Development Block Grant funds, will create a downtown revitalization plan. The types of activities identified in the plan will then be eligible to apply for state funds.

Don Hinds, about 25 years ago, completed one of the first CDBG projects downtown when he converted the former Chevrolet dealership at the corner of Fifth and D streets into an eight-bay commercial rental property.

Today, it is home to professional offices, restaurants and other businesses.

"There was an ad in the paper under classified that said, ‘Downtown lot for sale, building free,' that caught my eye," he said. "I felt like it was my charge to kind of help improve downtown, and of course make an investment on my own. I got a $75,000 CDBG loan at only 5-1/4 percent. Had that not happened, I would not have been able to make the project economically feasible."

Hinds also was the first president of MainStreet when it formed in 1980.

He said previous downtown revitalization plans helped spur some changes, "because the studies made us aware of our surroundings and the need for improvement in a lot of the older structures."

When a few years later Fremont became the first community designated as a MainStreet Community on the national level, "It was quite an honor," Hinds said.

Later, storefronts were redone and an upstairs apartment was created at the 502 building.

The Kollmeyer building, built as a hardware store in 1929, underwent a major renovation and now offers a restaurant and smaller shops.

There was a plan to turn the upper floors of the 505 building on Main Street into apartments, but funding issues have thus far stood in the way.

"Façade restoration projects should be planned to enhance the quantity and quality of contributing historic buildings in the area," a 1994 University of Nebraska-Lincoln, College of Architecture study recommended.

Past studies haven't agreed on all the components of downtown revitalization. One study, for example, suggests maintaining streets as one-way in order to "maintain a pedestrian friendly environment," while another report counters that returning Main Street to two-way circulation will increase business traffic to retailers and make traffic patterns less confusing.

Streetscaping - using plants and green space to add to the downtown environment - has been a popular theme in studies and comprehensive plans.

At approximately 8:15 a.m., Dec. 1, Pedro Hernandez-Vicente, 61, of Fremont was arrested on suspicion of driving with a revoked license follow…

Sheriff Hespen Gives Letter of Resignation At Board Meeting

Sheriff Steven Hespen gave his formal letter of resignation to the Dodge County Board of Supervisors on Wednesday.

At approximately 10:45 a.m., Dec. 1, Dale J. Gore, 39, of Fremont was arrested on suspicion of driving with a suspended license following a tr…

Planters and new sidewalks now adorn the downtown area as part of a plan to revitalize the area. Other components include facade repairs and upgrades, trees and more. (Tribune Files)

Workers with the Department of Utilities take down a large light pole in the 200 block of North Main Street in March. Lighting is one of several components that have been discussed over the years regarding downtown revitalization. (Tribune Files)

The downtown area has experienced many revitalization plans that have included items such as new lights, sidewalks and streets all of which have seen progress this year. (Chris Bristol, Fremont Tribune)