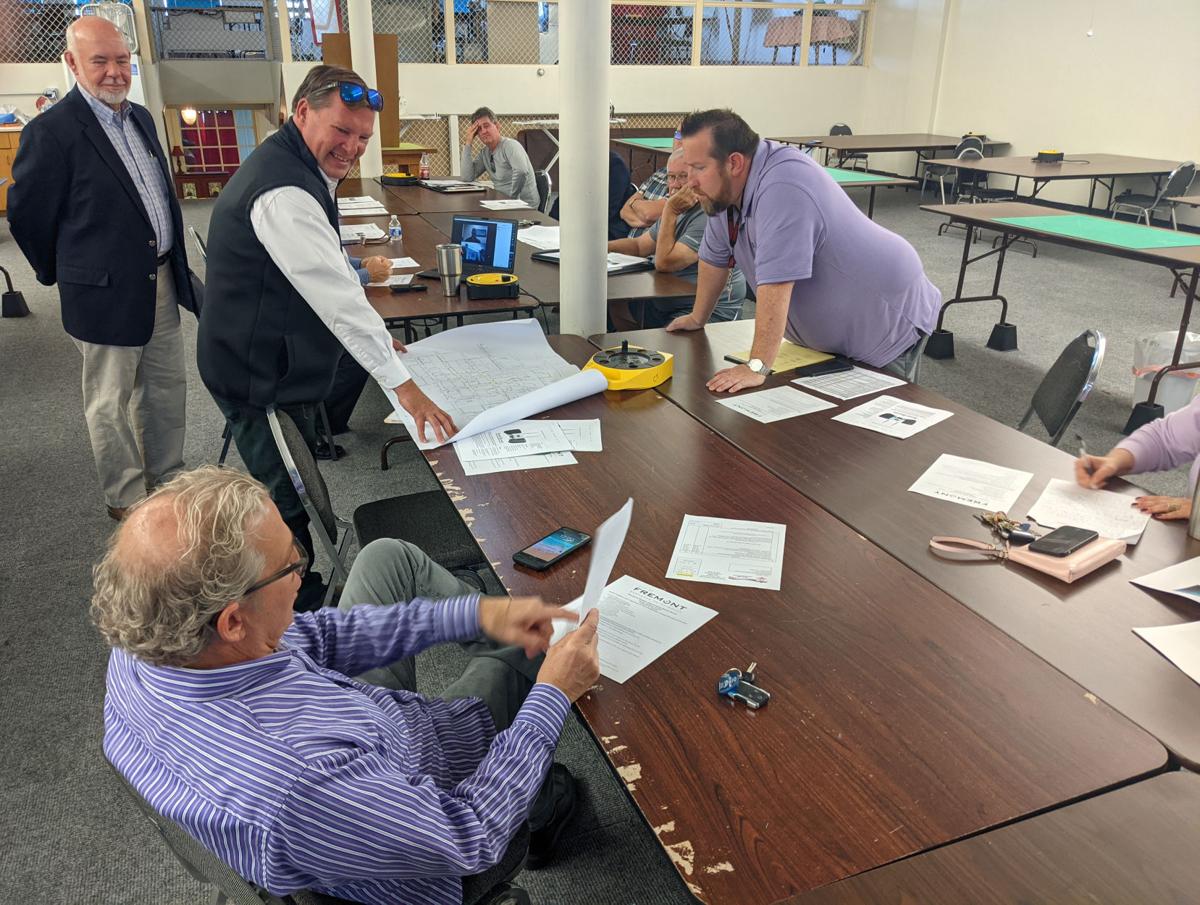 Scott Givens of Audio Video Specialist, standing second from left, presents plans for a downtown Fremont speaker system to members of the Downtown Business Improvement District Board Sept. 21. The BID's renewal was discussed by the Fremont City Council at its meeting Tuesday. 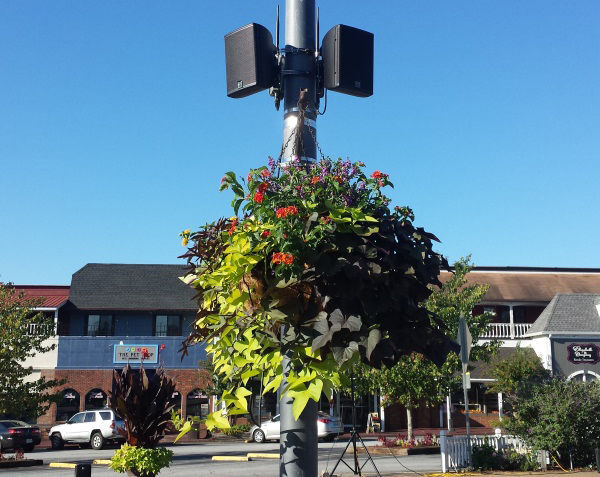 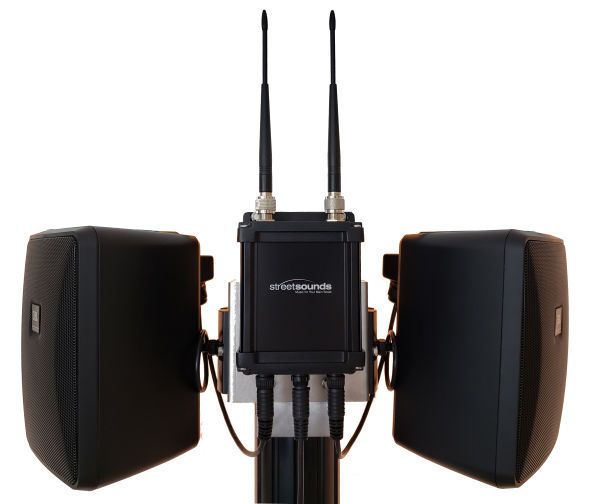 A StreetSounds unit is comprised of two speakers and receiver hardware. The Downtown Business Improvement District Board approved the purchase of units for downtown Fremont. 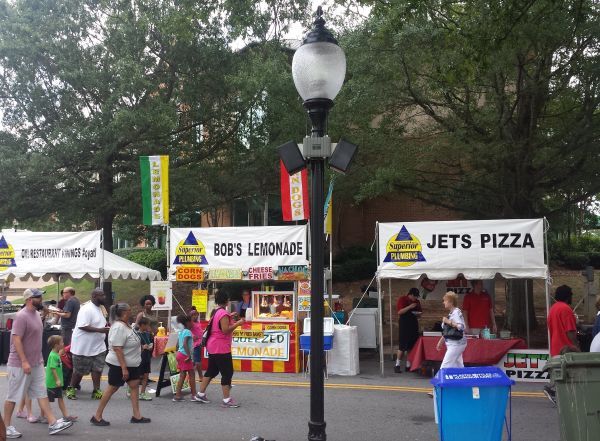 The Downtown Business Improvement District Board approved the purchasing of units for a downtown speaker system at its meeting Tuesday.

The board approved a motion 6-1 to purchase nine StreetSounds units at around $2,500 each to test the system before purchasing 24 more to place along Main Street.

Scott Givens of Audio Video Specialist said he had discussed the project at length with MainStreet of Fremont Executive Director Shannon Mullen and a representative from manufacturer AirNetix.

“This is a really awesome product that they have, and as far as I can tell, they’re about the only ones that make any product exactly like this,” he said.

The units, which consist of two speakers each, will be placed on light posts. Givens’ proposal included placing three per block on Main Street from Second to Sixth streets, as well as areas on Park Avenue and Fourth Street.

“You could add more as time goes on, you could move them around if you had to,” Givens said.

The speakers will be able to play music from a Pandora station at specific times. Mullen said the current plan is around 8 a.m. to 8 p.m., starting a few hours later on Sundays due to church services in the area.

Givens said the units are 100% weatherproof and have been used in cities around the country in areas like downtown, parks and zoos.

“This is a product that isn’t necessarily Wi-Fi, it’s a 900 MHz system, which means that it jumps from pole to pole,” he said. “So we’re not trying to get from the top of one building three blocks away through another building.”

Additionally, the project will include a portable, battery-charged piece that can be used at events such as car shows.

“If they want to use the system, it can be used through their system, and that’s all the way up and down Main Street, without them dragging wires all over and speakers everywhere,” Givens said.

The speakers are also able to be set at different volumes so that certain areas are quieter or even mute.

“Say 105.5 comes out and sets up their own speakers, you could even adjust the system through the software so that the speakers closest to that stage are muted way down, and then turn up as you get further down the block,” he said. “That’s one thing that this system did that other ones don’t.”

Chairman Tom Coday made the suggestion to purchase just nine units at first, which Givens said was feasible.

“It would just give us a good picture of what is actually going to happen,” Coday said. “I think we could have a couple of wreaths put up on the light pole if need be to see [if it works].”

Although Givens’ original proposal called for 30 units, Boardmember Howard Krasne asked to have an additional three on the north side of Main Street near the Fremont Eagles Club.

With the project’s scope, Krasne said some businesses may be upset at being left out, but he said the BID had a budget it needed to stay within.

“We are going to take heat regardless of what our boundaries are, so we need to be prepared for that,” he said. “But we have to be able to start somewhere.”

Additionally, Krasne said the purchase would help with supporting the BID as its renewal is decided by the Fremont City Council next week.

“By putting these speakers downtown, we’re going to hopefully attract traffic, which will benefit everybody,” he said. “And as property owners, it will also benefit our property values hopefully, which in turn will come back to appreciate the buildings and give the city more revenue.”

Coday agreed with Krasne that the project could always be expanded in the future.

“We didn’t put up all the Christmas decorations the first year, we did it in waves,” he said. “And so we can continue that with the speaker system if we’ve got areas of interest, but we’ve definitely covered most of the area where people are walking.”

In creating the plan, Mullen said she wanted to stay away from the outside boundaries as they typically contain residential areas.

“We had to be really cognizant of some of those people who are going to be living there,” she said. “They may or may not like or love this at all, so I know that there’s some opportunity to continue to grow it.”

When asked by Krasne as to how many more units the system could take on, Givens said he was told by the manufacturer that 30 was “mid-range,” but would check as to the maximum capacity.

Although Givens said he wasn’t sure when he would be able to get the product due to availability, he said placing all 33 units wouldn’t take more than two weeks.

City Administrator Brian Newton said he would also have to work with the city utilities department in getting electricity run to where the units need power.

“I think it’ll work, but it may not be exactly like the drawing,” he said.

Additionally, Mullen said she would start writing an application for a Keno grant from the city for the project, as the deadline is Oct. 1.

However, Boardmember Brenden Murray said he didn’t feel comfortable putting down so much money for the units without knowing when they would arrive and felt the purchase would result in backlash.

Krasne made a motion to approve Givens’ proposal, with the addition of three units, by purchasing nine units at first and the rest contingent on approval by the BID and discussions between Newton, Givens and the utilities department.

The board voted 6-1, with Murray voting against. Boardmembers JJ Bixby, Roxie Kracl, Bill Parks and Richard Register were not present.

The board also approved a motion 6-0 to recommend the renewal of the BID for another five-year term to the city council. Krasne was not present for the vote.

Newton said the decision required a public hearing, and as notice was not posted beforehand in time, input would be taken at the second reading on Oct. 12.

But Newton said the first reading would be held Sept. 28 and that the council could decide to waive the third reading or hold it until Oct. 26.

During her update to the board, Mullen said MainStreet was holding interviews for a joint MainStreet/BID director position.

JCF Days board has some new members

It’s time to look ahead.

With each year that the Fremont Area Chamber of Commerce’s Beer Fest is held, Executive Director Tara Lea said businesses up the ante a little bit.

Fremont-area calendar of events for Sept. 23-25

Find out what's happening in Fremont and the surrounding area.

Children in Fremont are helping to raise awareness in keeping the city's waterways clean.

Scott Givens of Audio Video Specialist, standing second from left, presents plans for a downtown Fremont speaker system to members of the Downtown Business Improvement District Board Sept. 21. The BID's renewal was discussed by the Fremont City Council at its meeting Tuesday.

A StreetSounds unit is comprised of two speakers and receiver hardware. The Downtown Business Improvement District Board approved the purchase of units for downtown Fremont.