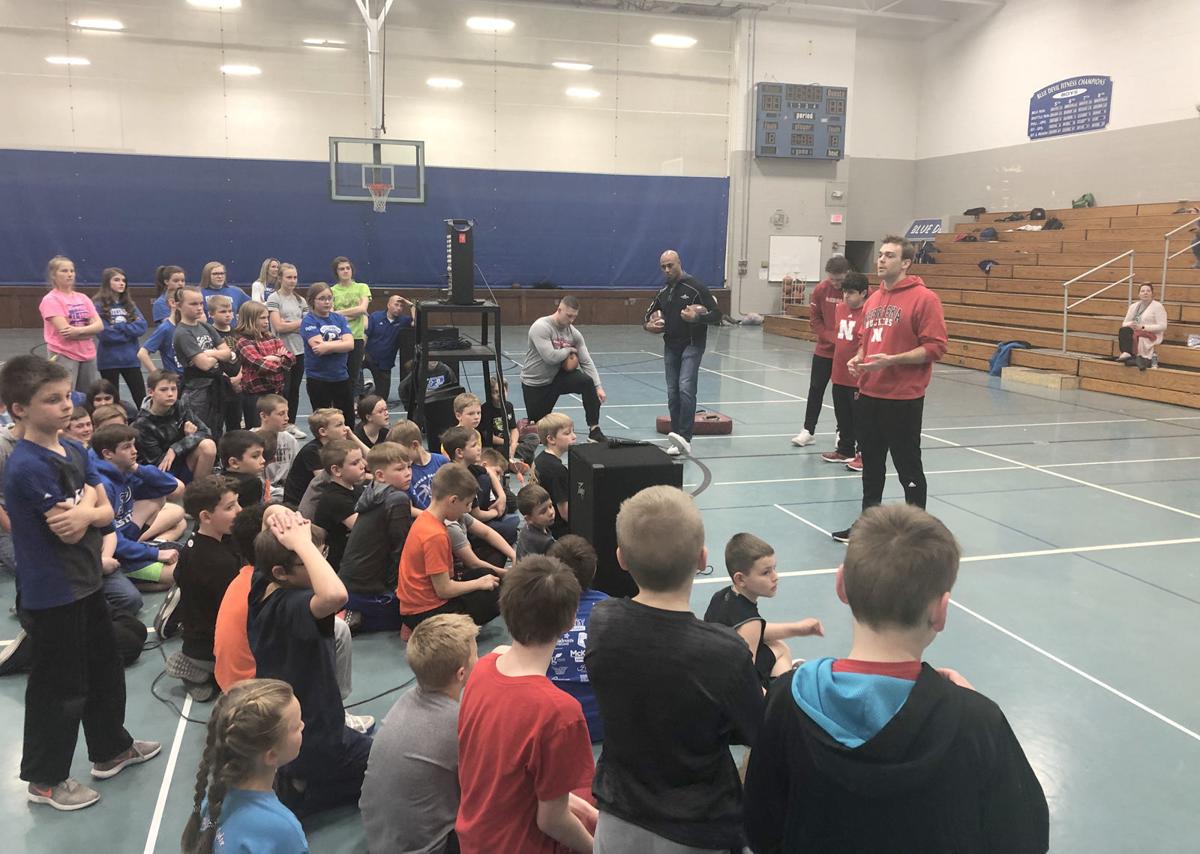 Ron Brown is shown speaking at a Kingdom Sports event. Brown, who co-founded and is a volunteer for the nonprofit organization, will speak at the 15th Annual Fremont Area Leadership Prayer Breakfast on April 19 in the Midland University Event Center. 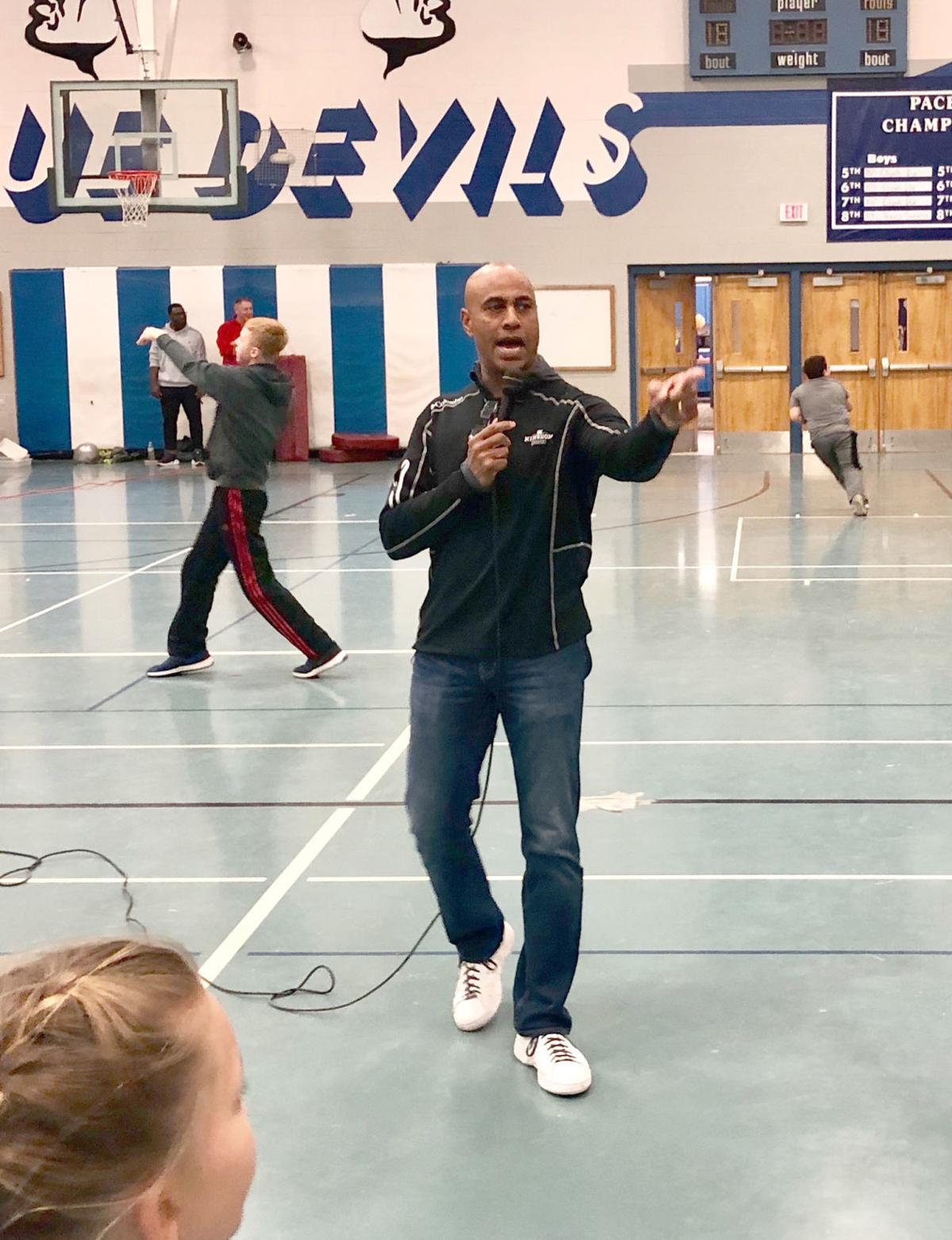 Ron Brown is shown speaking at a Kingdom Sports event. Brown is director of player development for the University of Nebraska football team and co-founder and volunteer for Kingdom Sports. 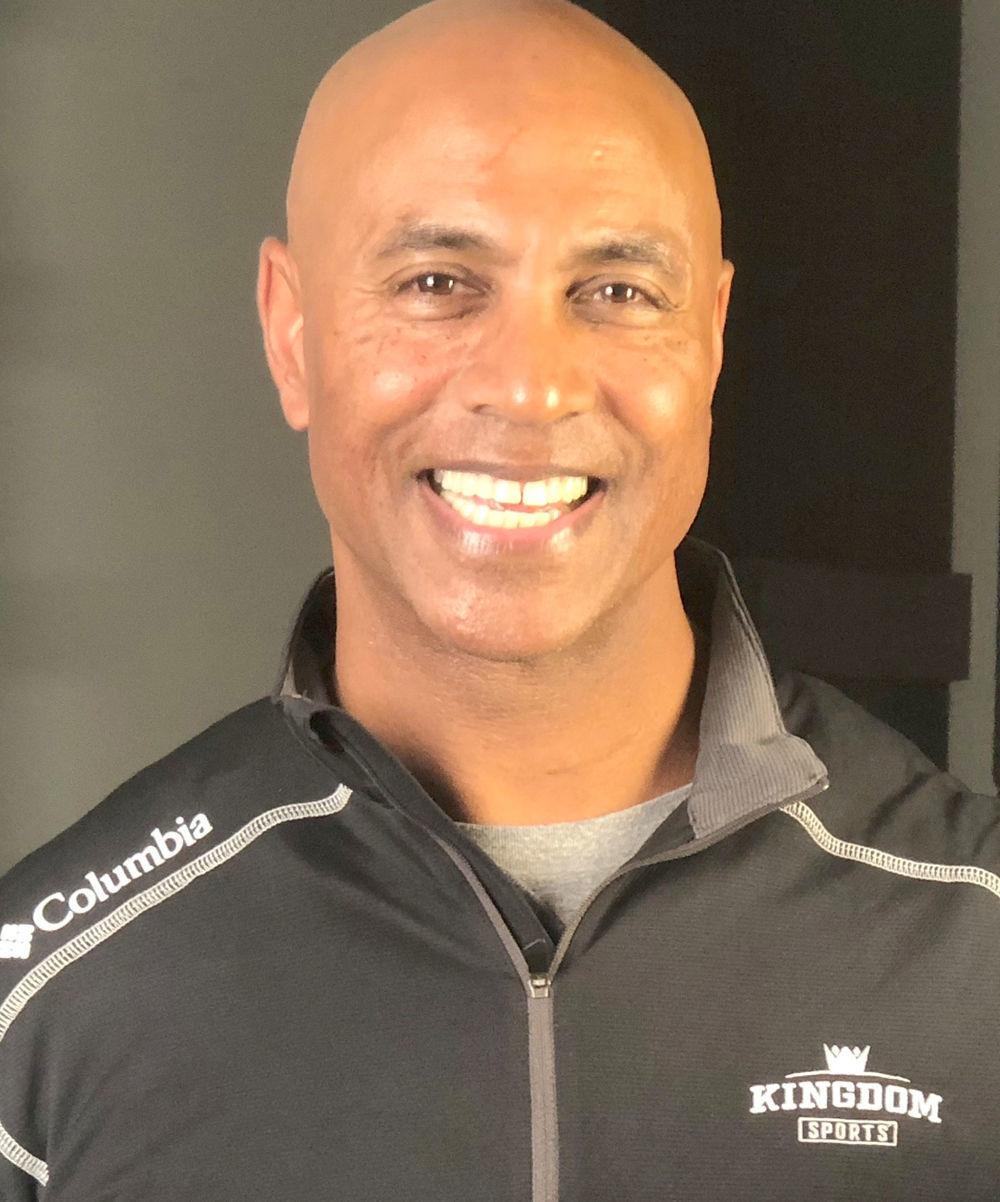 Ron Brown remembers the boy at the free throw line at the basketball game.

With two seconds left on the clock, the 8-year-old had to make two shots to tie — and then win — the game for his team.

Brown, who was refereeing the game, handed the ball to the child as people in the stands hollered the boy’s name.

The pressure was too intense for the child.

“He got scared at the free throw line and he dropped the ball and cried,” said Brown, the co-founder of Kingdom Sports. “He was so afraid of what everybody thought.”

Brown would learn much from that situation. Today, he tells how Jesus can bring people peace during anxious — and even fearful — times and how parents can use sports to draw children into a relationship with Christ that can help them for the rest of their lives.

On April 19, Brown will be the guest speaker for the 15th Annual Fremont Area Leadership Prayer Breakfast.

Brown is director of player development for the University of Nebraska football team. He spent 24 seasons as an assistant coach at Nebraska while they won three national championships.

He is a member of the Fellowship of Christian Athletes Hall of Champions and former Nebraska FCA director.

In 2018, Brown and Gordon Thiessen became co-founders of Kingdom Sports. Brown is a volunteer and Thiessen is director of the nonprofit organization, which has resources that aim to help “athletes and coaches to become experts in God’s design for godly competition.”

The resources include books, Bible studies, videos, apps and websites.

“It’s a curriculum with a focus on Biblical training and sports,” Brown said.

In addition, the organization provides training opportunities through clinics and camps.

Brown cites the Scripture of Colossians 3:23 in which Christians are urged to do their work heartily as unto the Lord and not to men.

“It doesn’t mean that you disregard people, it means that your motivation is to glorify God — not yourself or not other people. You’re making the Lord famous. You’re shining the spotlight on Jesus,” he said.

Brown points out a contrast.

“There’s a lot of ‘doing sports man’s way’ — where man gets the glory,” he said. “And it’s not supposed to be about that.”

Brown cites another Bible verse where John the Baptist draws attention away from himself and points it toward Christ.

That’s what is taught in Kingdom Sports.

“We want Christian parents to understand that sports is a great way to expose your youngster of their need for Jesus,” Brown said.

Brown brings up the real-life example of the child who dropped the ball and cried.

At first, Brown thought that perhaps the moment was too big and that too much has been made of sports.

Now, he believes the child — whom he anonymously calls “Little Johnny” — was dealing with fear.

Things could have been different if Johnny had understood that Jesus would help kick fear out the door.

“If his focus was on Jesus and his relationship with Jesus — Jesus promises to give us a heart of peace in these anxious moments as we trust him, as we focus on him,” Brown said. “But if our focus is on the world and what we’re afraid of — we’re going to remain anxious which is the baby cousin of fear and it builds up to a point where you’re now paralyzed in your thoughts, actions and behavior.

“That’s one of the reasons why Kingdom Sports has had some effect on people and — we want to continue with it — is because we’re reminding people through the vehicle of sports of their need for Jesus.”

Parents can use teachable moments in sports — not to make celebrities of their kids.

“It’s not all about getting scholarships and being a pro,” he said, adding, “Less than 1 percent of all of the children in this country will ever even sniff a pro locker room.”

But every one of these children will do something in their life where they’re going to experience what that child experienced at the free throw line, he said.

Some people might say a child will grow out of that fear.

“But because I’ve been coaching for years and I’ve watched these little boys grow up into manhood, when little Johnny is 18, he will stand at another free throw line and — if he hasn’t dealt with the fear that he was engulfed with when he was 8 years old — then the free throw line that he’ll stand at, perhaps when he’s 18, will be in front of fellow friends who are his age, who will dare him to smoke a marijuana joint,” Brown said.

And Johnny will be paralyzed with his decision there as well.

“If he doesn’t deal with it then, when he’s 38 — maybe out of the fear of feeling like he’s missed out on life — he will walk away from his wife and his children,” Brown said, adding, “There are all kinds of things happening in our culture today that are fear-driven.”

Brown said the curriculum shows people’s need for Jesus to forgive their sin and give them abundant life.

The curriculum deals with kids from third grade to adulthood.

Brown personally coaches kids in this ministry outreach from third through eighth grade.

He is not allowed to coach high school kids.

Brown can coach college kids — not as a football coach — but in ministry outreach, but he cannot do so with high school students because he is part of a football program where there are only a certain number of people who can recruit during select times of the year.

It would be a recruiting violation if he were to work with high school students.

While his job doesn’t permit him to work with high school-age students, Brown sees the importance of reaching children early — like in grades 3 to 8.

“Many of these children are being left behind — even in the ministry world — because a lot of ministries are geared toward high school kids, coaches and the college and pro world,” he said.

Yet there are approximately 50 million to 60 million kids in America between the ages of 8 and 18 who are involved in organized sports and most of them are middle school kids, he said.

“You’ve got millions of kids in this country, who are participating in sports,” he said.

Parents can use teachable moments in sports to help disciple their children in the Lord, Brown noted.

As he looks forward to the Good Friday breakfast in Fremont, Brown points out the importance of: prayer; spending time with Christ; knowing him intimately and intentionally making him known.

“When we’re talking about prayer, we’re talking about the most powerful weapon that God has given to us,” Brown said. “And — when I say weapon — I don’t mean anything violent, I mean something that’s very productive and useful in seeing his will accomplished on this earth.”

You don’t often get goosebumps at a public meeting.

Recent flooding has kept city crews busy and has taken a toll on a local park in Fremont.

Uniquely Yours Stability Support is helping those affected by recent flooding.

Jon Brown remembers how it all started.

Sonia Vanderworth is inviting area families to take part in a unique program at Keene Memorial Library in Fremont.

Sharp Imaging and Information Company of America, a division of Sharp Electronics Corporation recently recognized Eakes Office Solutions as a …

Tad Bauer, president of Bauer Built Inc. of Durand, Wisconsin, has announced the acquisition of the commercial tire division of Allied Oil &am…

Peter Jacobus, an American Family Insurance agency owner with agency locations in both Fremont and Wahoo, has been recognized for providing an…

Gordmans has teamed up with the American Heart Association to raise awareness and funds in the fight against heart disease, the leading cause …

Walmart is accepting applications for its 6th annual Open Call, scheduled for June 18 and 19 at the company’s Home Office campus in Bentonvill…

A ribbon cutting ceremony and open house to celebrate the opening of the new Donald E. Nielsen Career and Technical Education Center in West P…

Hormel retirees will meet for a potluck lunch at noon Tuesday at the Union Hall in Fremont. There will be bingo after lunch.

Personal property returns are due on May 1

Attention personal property owners, May 1 is the last day to file your Nebraska Personal Property Return & Depreciation Schedule (if owned…

One recent afternoon, Happy Aldana and other women were poking pinwheels into the lawn of the Dodge County Courthouse.

Peace Lutheran Church will again host a day camp on Friday, April 19, to focus on Easter truths and the love of Jesus.

It is imagination captured on fabric.

You don’t have to go far to see a variety of artwork.

Midland University is offering a reimagined degree designed to help graduates be successful in various business and performing arts careers.

It was after midnight when Gary Spies saw the water.

When Dick Dunaway talks about Samaritan’s Purse, he talks about a circle — one that provides friendship, hope and prayer.

Ron Brown is shown speaking at a Kingdom Sports event. Brown, who co-founded and is a volunteer for the nonprofit organization, will speak at the 15th Annual Fremont Area Leadership Prayer Breakfast on April 19 in the Midland University Event Center.

Ron Brown is shown speaking at a Kingdom Sports event. Brown is director of player development for the University of Nebraska football team and co-founder and volunteer for Kingdom Sports.