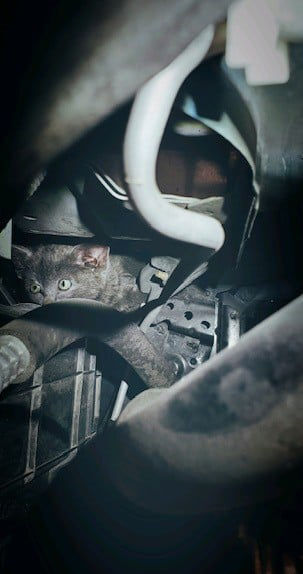 Fremont Police Department community service officers rescued a small cat from a car engine Wednesday morning. The cat had climbed into the engine before the car took off and was discovered only after his meowing was heard. 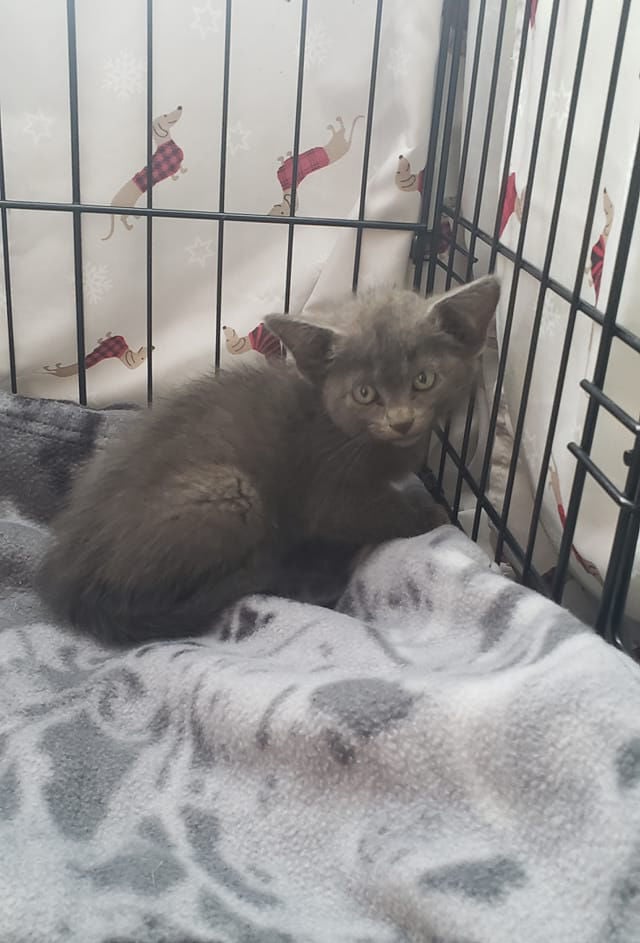 A cat rescued from a car engine was safely taken to the FurEver Home Wednesday.

“They were actually out driving, and they had pulled into the gas station and heard what sounded like meowing coming from their car engine,” she said. “So they looked, and lo and behold, there was a kitten stuck in their engine.”

The department’s CSOs had to make a rescue for a small cat that got taken along for an accidental trip Wednesday morning.

While FPD occasionally receives reports of cats climbing into car engines, Brown said they’re not typical this time of year.

“Usually they go into engines when it’s super cold out because engines are nice and warm,” she said. “But in the summer, we don’t see that a lot, and I have a feeling something spooked him and he ran up in there to hide.”

Prior to finding the cat, the resident had driven around three miles from Washington Heights to Walmart, Brown said.

“And they weren’t sure where it came from or how it got in there, so they called us,” she said. “We went out there and tried and tried to get it, but it was really hard to maneuver around in there.”

As the car was close to Walmart, Brown said she asked the resident to pull into the mechanic shop’s service bay and asked an employee if they could lift the vehicle.

“They were gracious enough to help us with this, so we got the car lifted up,” she said. “We had to go in and take some things apart underneath the hood, and we were able to get the little guy out that way.”

With the cat freed from the car, Brown said officers were unable to find any signs of identification, including a microchip, collar or tag.

“The cat was super scared, so we transported him to FurEver Home, which shelters animals that are stray,” she said. “And to my knowledge, I think he is still there awaiting reclaim, hoping that an owner will come forward and try to claim him.”

FurEver Home posted a picture of the cat to their Facebook page later that afternoon, asking viewers to call 402-979-8800 to claim him.

Brown said she was thankful for the resident for staying alert and calling the department as soon as she heard the meowing.

“He was definitely lucky that he wasn’t injured, and we’ve seen a lot of cats with severe injuries because they’re up inside of an engine,” she said. “But he got super lucky there, and I’m glad that she noticed him when she did and that she knew not to go anywhere.”

The Three Rivers Public Health Department identified four new lab-confirmed COVID-19 variants within its health district, three of which have …

Three Rivers to be featured in COVID-19 documentary

Three Rivers Public Health Department will be featured in an upcoming documentary about the COVID-19 pandemic.

With a high heat index forecast for Wednesday, a weather expert is urging area residents to be cautious.

Get ready for the Washington and Dodge County fairs

Plan your week with a look ahead to the Washington and Dodge County fairs.

Fremont Police Department community service officers rescued a small cat from a car engine Wednesday morning. The cat had climbed into the engine before the car took off and was discovered only after his meowing was heard.

A cat rescued from a car engine was safely taken to the FurEver Home Wednesday.