US daily virus death toll back above 1,000 for first time in over a month. Get the latest. 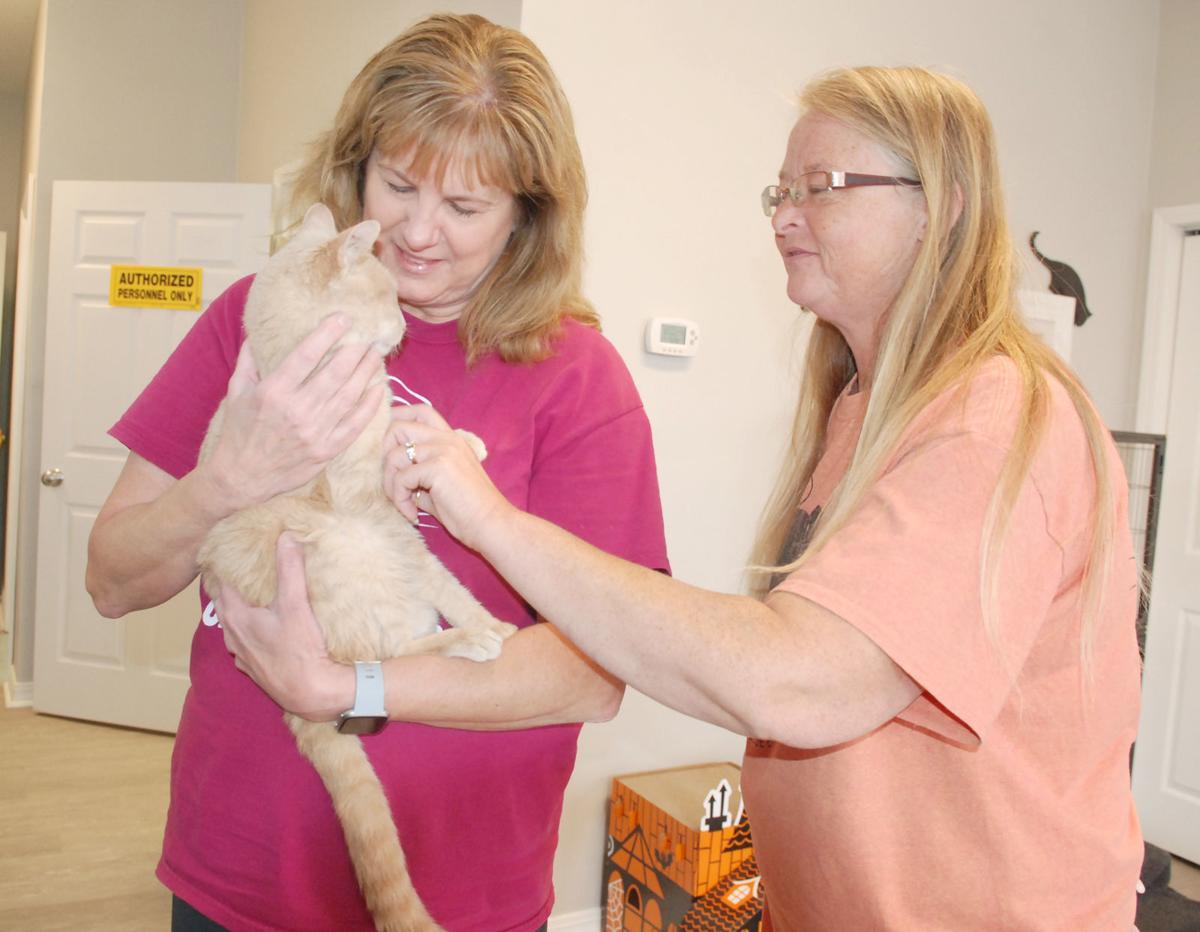 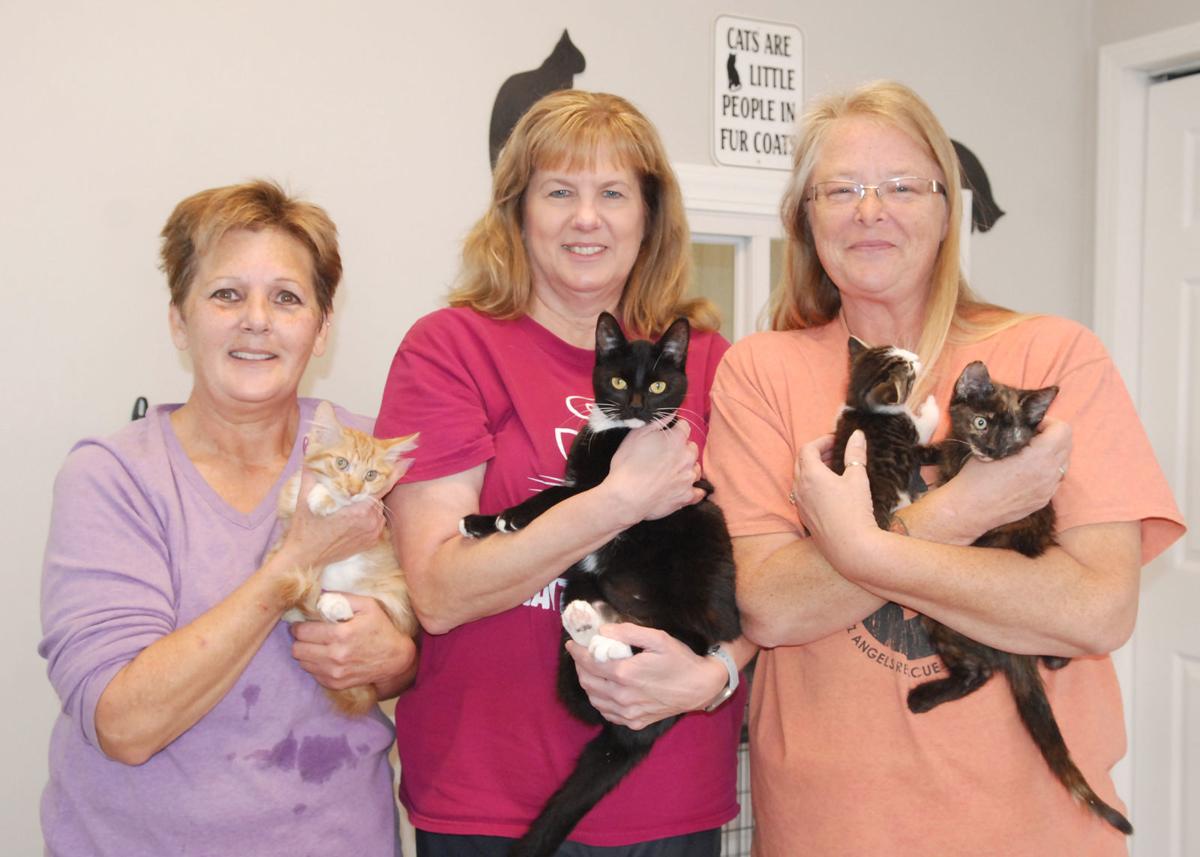 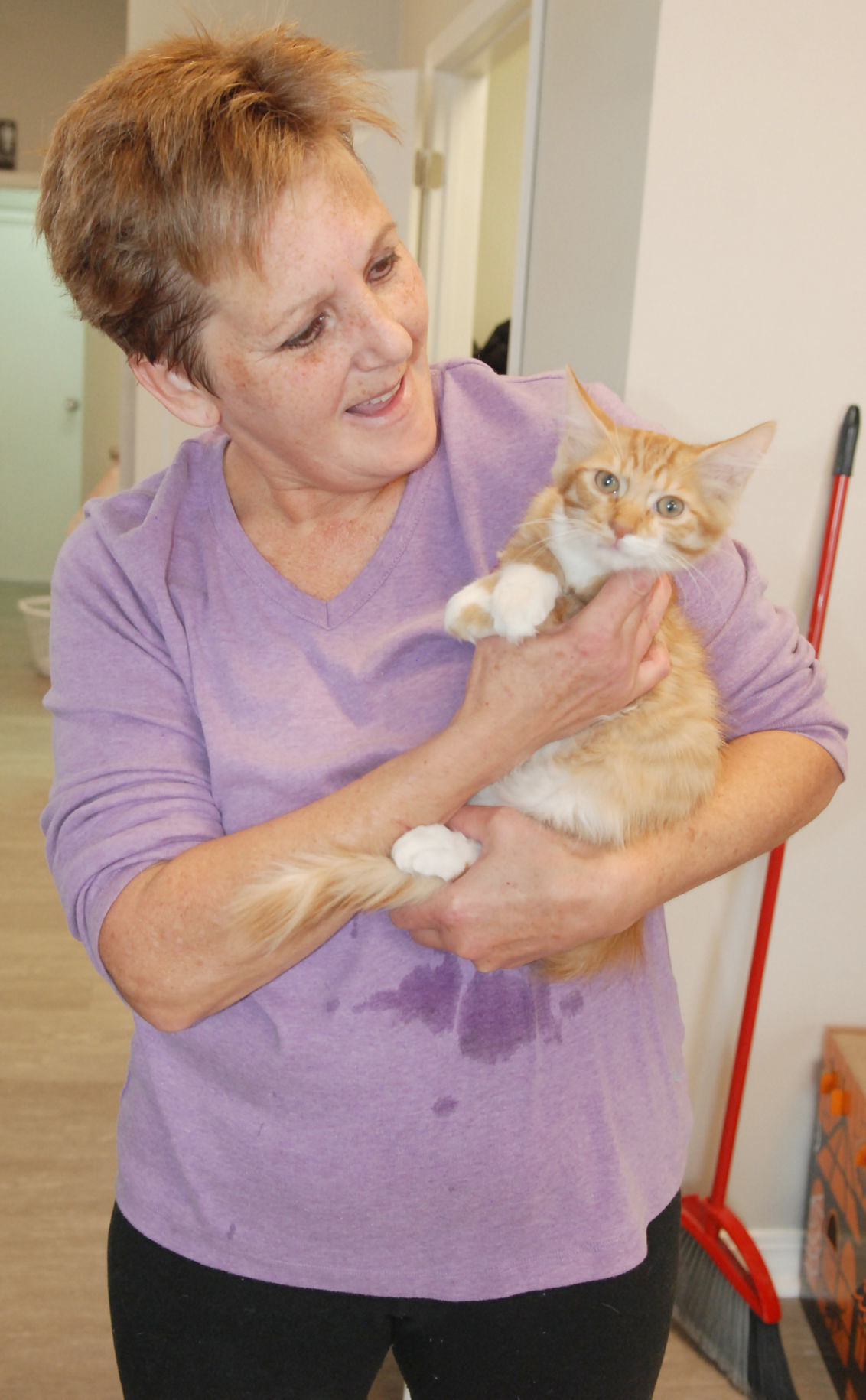 Sharon Fischer, a volunteer at Catz Angels Rescue Effort (CARE), nurtures a cat on Tuesday morning at the nonprofit organization's office in downtown Fremont. Fischer was taking a brief break from cleaning.

Marsha Niday didn’t make it to church one Sunday morning.

That day, the Fremont woman was driving along U.S. Highway 30 when she saw it:

A cat was lying in the ditch.

So she missed that Sunday’s service at Peace Lutheran Church to become a Good Samaritan for an animal in need.

“But he was warm and comforted and he ate and he died peacefully,” she said.

Many of Niday’s stories don’t end so sadly, but there is great need.

Niday is secretary and a board member of Catz Angels Rescue Effort (CARE), a nonprofit, volunteer-run organization that rescues kittens, gets them much-needed vet care and finds them good homes.

The group has a Trap-Neuter-Return (TNR) program for feral cats and also helps low-income individuals spay or neuter and vaccinate their cats.

In September alone, the group had 96 cats either spayed or neutered and helped hundreds.

The organization also moved into a new location at 251 W. Fifth St., in September, the same month it received its state license as a shelter.

In October, the organization earned a ServeNebraska Volunteer Service Commission Award for its efforts in helping cats during the spring flooding.

CARE was started in the fall of 2016 by a group of six women.

“We just wanted to help cats,” Niday said. “We saw such a great need and couldn’t turn our heads.”

Becky Pence, one of the group’s founding members, had noticed a colony of cats by Big Red Keno and was put in contact with Niday, who’d started a Facebook group titled, “Catz Angels.”

A 2017 Tribune article details how the local residents, including Peggy Peterson, who has years of experience of humanely trapping animals and the Dodge County Humane Society, used live traps to retrieve the cats by the keno club.

That led to the TNR program in which group traps abandoned, feral — or what they call “community cats” —and has them spayed or neutered and vaccinated. After that, the cats are either released or a home is found for them.

“There are a certain percentage of cats that have never been socialized in any fashion by humans and if they’re grown cats they can’t usually be socialized at that point,” Niday said.

There are exceptions. Some feral cats can be socialized, but it can months or years for them to trust humans.

But due to the overwhelming population of feral cats, the group can’t do that for each one.

“So the best results would be to spay and neuter as many as we can — off the streets — so they’re not repopulating at such a gross number,” said Shiela Wall, vice president.

A mother cat can have up to four or more litters of kittens a year. Each litter can consist of anywhere from two to 10 kittens. And kittens can start reproducing at four months old.

“We at least get the wild feral cats fixed and returned,” said Wall, who is the group’s medical director and lines up veterinarian appointments.

The tip of the community cat’s left ear is surgically removed to indicate the animal has been spayed or neutered and vaccinated. That’s a worldwide symbol, indicating the cat has been fixed and to not harm it.

After starting the group, volunteers also saw a need for rescue.

“There are so many that deserve a better chance,” Niday said.

Wall said there are many orphaned kittens, whose mothers have been hit by a car or killed by animals or humans.

“A lot of people think cats are self-sufficient when they’re not,” Niday said. “There are people who will literally toss their cat out the door and move. We see so much of that and so we try to help so cats that are out on the streets that depend on humans.”

The group developed a foster program so orphans and tame cats could have a place to stay until they can be adopted.

“We have over 40 foster homes right now,” Wall said.

The homes are in Nebraska and South Dakota.

During mid-March flooding, the volunteers rescued 151 cats. All but one were able to be returned to their homes or adopted out. One cat was returned from an adoption.

The group continues to help cats in precarious situations.

A couple of weeks ago, Niday and Jan Pemberton, CARE’s president and director, and two Dodge County Humane Society employees went on a rescue mission after a call came in at about 10 p.m.

A cat had tried to jump a fence when it landed and basically became impaled on a piece of rebar and was pinned to the ground.

They brought the cat to the shelter and under a veterinarian’s direction kept the animal warm and comfortable through the night. The animal underwent surgery the next day and because it was micro-chipped was able to be reunited with its owner.

Without the microchip, the cat’s owner probably never would have known what happened to the animal.

Recently, another cat was hit by a truck. Wall cared for that animal that will have a long recovery but will be OK.

“We don’t euthanize unless they are beyond modern medicine,” Wall said. “We do everything we can for them.”

The organization has assisted many people with cat food, litter and medical care, especially during the spring flooding.

And volunteers do something else.

“We do a lot of education with the families — especially the low-income families that need assistance,” Wall said. “We help them as much as we can to get the resources they need. If we don’t have the resources, we can guide them to the correct resources.”

Volunteers have done other things — like delivering cat food to a home, because the owner didn’t have a car — or taking a pet to the vet.

And in many cases, those animals are all they have.

An animal often can sense when a person is downhearted and provide comfort.

“We can’t save every cat,” Wall said. “There are ones we lose, whether it be a small kitten that has faded or a cat that’s been hit by a car or an elderly cat that’s been surrendered because they’re sick.”

And there was that cat in the ditch.

“Sometimes, we cry tears over cats that no one has ever even cared for,” Niday said, recalling that recent Sunday morning.

And although Luther didn’t make it, there are other cats that survive including about eight, who were living on an abandoned area farm. The starving animals, a male, a female and kittens, had survived by living off leftover horse feed.

“That was a really great rescue,” Niday said. “The mama cat ate four cans of cat food that night.”

Future plans include building their foster home base.

“We want to make a noticeable difference in this community by drastically reducing the stray and feral cat population,” Niday said. “That’s our ultimate goal to get those numbers as low as possible. We don’t want to be picking cats up off the street anymore. We want them to be healthy and warm in homes.”

Fremonters worked to save cats during flooding

Although evacuated themselves, retired firefighters Shiela and Todd Wall went on some unusual rescue missions during the spring flooding.

Jeff Miller knows that the ingredients of faith really can be as simple as sugar and cinnamon.

She didn’t wear a red suit, but Edie Ronhovde got to be Santa Claus on Tuesday.

Mary Loftis knows that Medicare-related information can be overwhelming.

This weekend, area residents will change their clocks back for the end of Daylight Savings Time.

The next meeting of the Fremont Area Association of Retired School Personnel will be Wednesday, Nov. 13, at United Methodist Church at Eighth …

Like the character she portrays, Maddison Underberg followed a guy to a new place.

It will be a time to cheer.

Sharon Fischer, a volunteer at Catz Angels Rescue Effort (CARE), nurtures a cat on Tuesday morning at the nonprofit organization's office in downtown Fremont. Fischer was taking a brief break from cleaning.