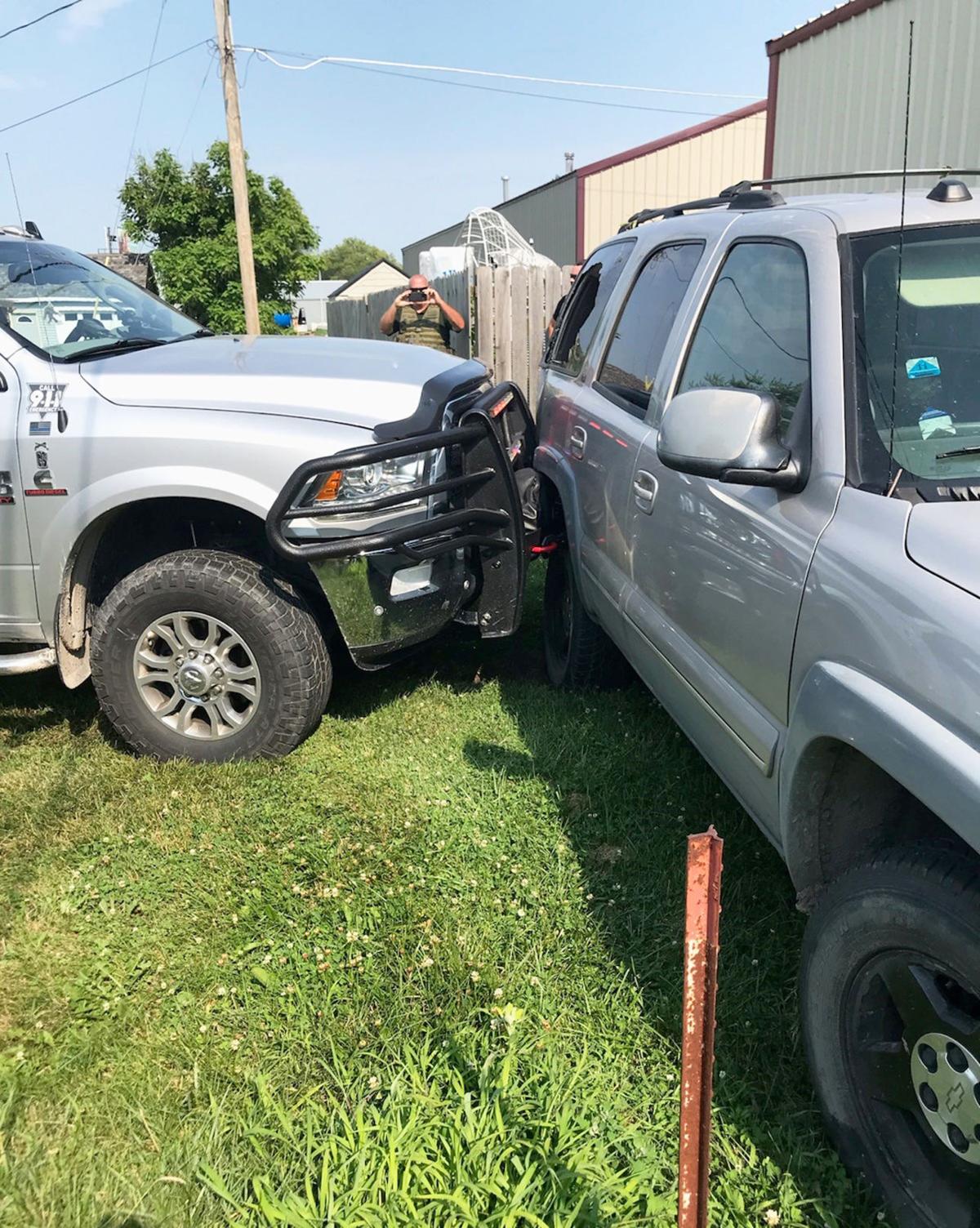 A law enforcement vehicle, left, is shown after it made contact with a vehicle driven by suspect Jesse A. Upchurch, 37, of Fremont. Upchurch faces several charges after being apprehended following a pursuit through Fremont. 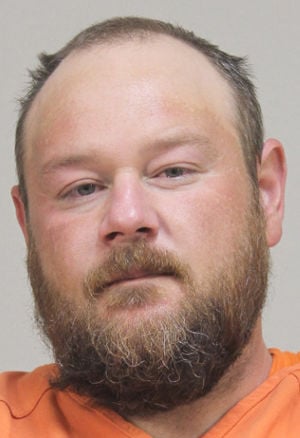 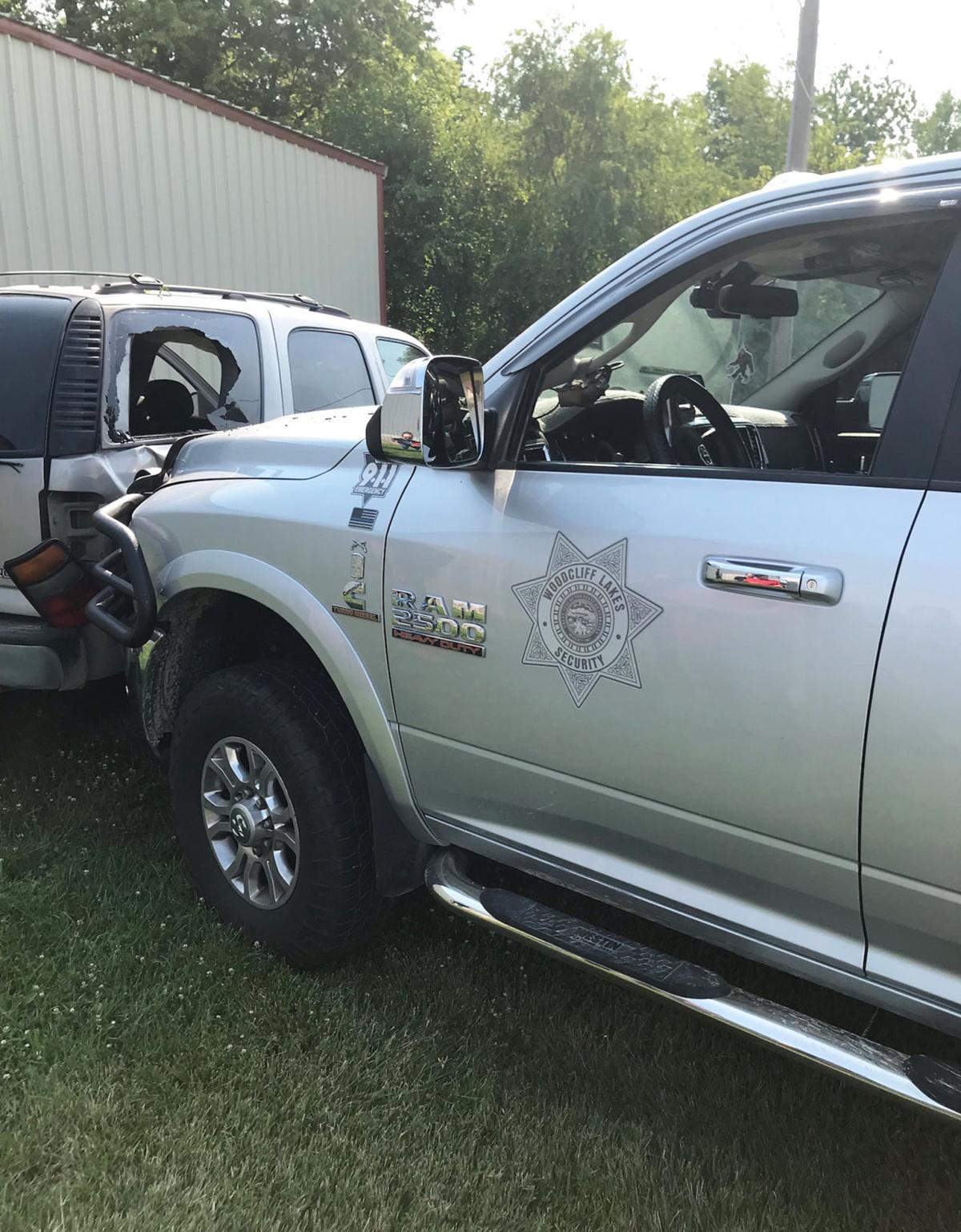 A law enforcement vehicle, right, is shown after it made contact with a vehicle driven by suspect Jesse A. Upchurch, 37, of Fremont. A Saunders County Deputy prevented Upchurch from leaving a vacant lot. The suspect was apprehended.

The young Fremont woman was off work and at home playing with her two puppies when she heard what sounded like tires burning rubber.

Such noise was unusual.

Lemus lives on a quiet street near Ronin Park in Fremont. Figuring someone was messing around with a motorcycle, she hadn’t planned to look out her window.

That’s when she saw an SUV driving through the park.

“I was kind of in shock,” Lemus said. “Usually that park is always busy. Maybe there was like two kids on the playground, but usually it’s packed. There’s a lot of kids playing there.”

It was 4:45 p.m. Tuesday when Jesse A. Upchurch, 37, of Fremont was taken into custody after fleeing from authorities for more than an hour.

Stukenholtz said he understands law enforcement in Dodge County are obtaining a search warrant on other related crimes.

Dodge County Attorney Paul Vaughan said he anticipates law enforcement in this county will submit a request for charges and an arrest warrant, but he hadn’t received that as of Thursday morning.

Stukenholtz said the incident began after 3:30 p.m. in Saunders County when a deputy located the man who is a suspect in a number of other crimes, one of which involves possession of a stolen vehicle.

The suspect fled in a 2004 Yukon SUV as soon as he saw the deputy.

He went from Cedar Bluffs on Nebraska Highway 109 to U.S. Highway 77.

He drove into Fremont traveling on multiple streets through residential areas. He drove through yards and parks.

The NSP airplane pilot estimated the suspect was driving 80 miles per hour during that time.

“We had discontinued the active pursuit, because of the dangerous way he was driving,” Stukenholtz said.

Even so, the suspect continued to drive in an aggressive manner.

Stukenholtz appreciates the public’s support and said as officers drove by people motioned which way they saw the suspect go.

“One pedestrian, who we wished had been further away from the street, flagged down an officer and said, ‘He went that direction right there,’” Stukenholtz said.

Stukenholtz noted the value of having the NSP airplane.

“He (the suspect) would go down a street and then he would drive down a yard or an alley,” Stukenholtz said. “The airplane was the real assist there.”

Back at her house, Lemus called 911 and said she’d seen the vehicle going up a street.

She heard sirens and went to talk to a sheriff’s deputy at the park.

“I was scared, because usually that park is always packed.” Lemus said. “Out of all the days, there were no kids there.”

Melody Leffler said she’d just gotten off work at about 4 p.m. when she heard sirens outside her house at Fifth Street and Nye Avenue.

Leffler said she saw an SUV drive in between two houses on Fifth Street — not through an alleyway — but through yards. The vehicle then shot down that street to the west.

Many small children live in her neighborhood. They play together and she knows their names.

As the mother of two young boys, Leffler thinks how devastating it would have been if one of the neighborhood children had been hit.

Leffler said a man from her neighborhood walked down from Rotary Park and said he’d almost been hit. The suspect is alleged to have driven through that park.

“We started talking across the street at each other and a police unit did stop and tell us to get back on our porches, because he (the suspect) was swerving to hit people,” Leffler said.

An entry on the Dodge County Sheriff’s Facebook page was filled with almost 170 comments and almost 330 views. One commenter said he was almost T-boned at 23rd and C streets. A woman said she was almost hit on First Street.

Stukenholtz said the suspect went to the south edge of Fremont where he drove his vehicle into a vacant lot and tried to go alongside a building.

A Saunders County deputy blocked the exit and kept him from leaving the lot.

The suspect, who was alone in his vehicle, surrendered and was apprehended.

Stukenholtz is glad there were no reports of injuries but urges the public to be cautious.

“If you’re a pedestrian or a motoring citizen, it’s hard to anticipate these things and thank goodness they’re unusual,” Stukenholtz said. “That’s why you always have to be pretty vigilant. Drive defensively. Don’t just walk down the sidewalk with your face in the phone. Pay attention.”

But even after the incident, people like Lemus remained stunned by what happened.

“It looked like the guy didn’t even care,” Lemus said. “He just wanted to run through the park and he wasn’t even going to look back.”

Having a ball raising funds for charity

It was another winning season for the Peace Lutheran Benevolent Bocce Ball League.

String Sprouts program to be offered in Fremont

Candace Jorgensen knows music can benefit children in many ways.

A 37-year-old Fremont man faces multiple charges after driving at least 80 miles per hour through the city.

When asked by Jamie Stark to start a Rexius Nutrition store in Fremont together, Brett Clausen said his decision was a no-brainer.

A law enforcement vehicle, left, is shown after it made contact with a vehicle driven by suspect Jesse A. Upchurch, 37, of Fremont. Upchurch faces several charges after being apprehended following a pursuit through Fremont.

A law enforcement vehicle, right, is shown after it made contact with a vehicle driven by suspect Jesse A. Upchurch, 37, of Fremont. A Saunders County Deputy prevented Upchurch from leaving a vacant lot. The suspect was apprehended.