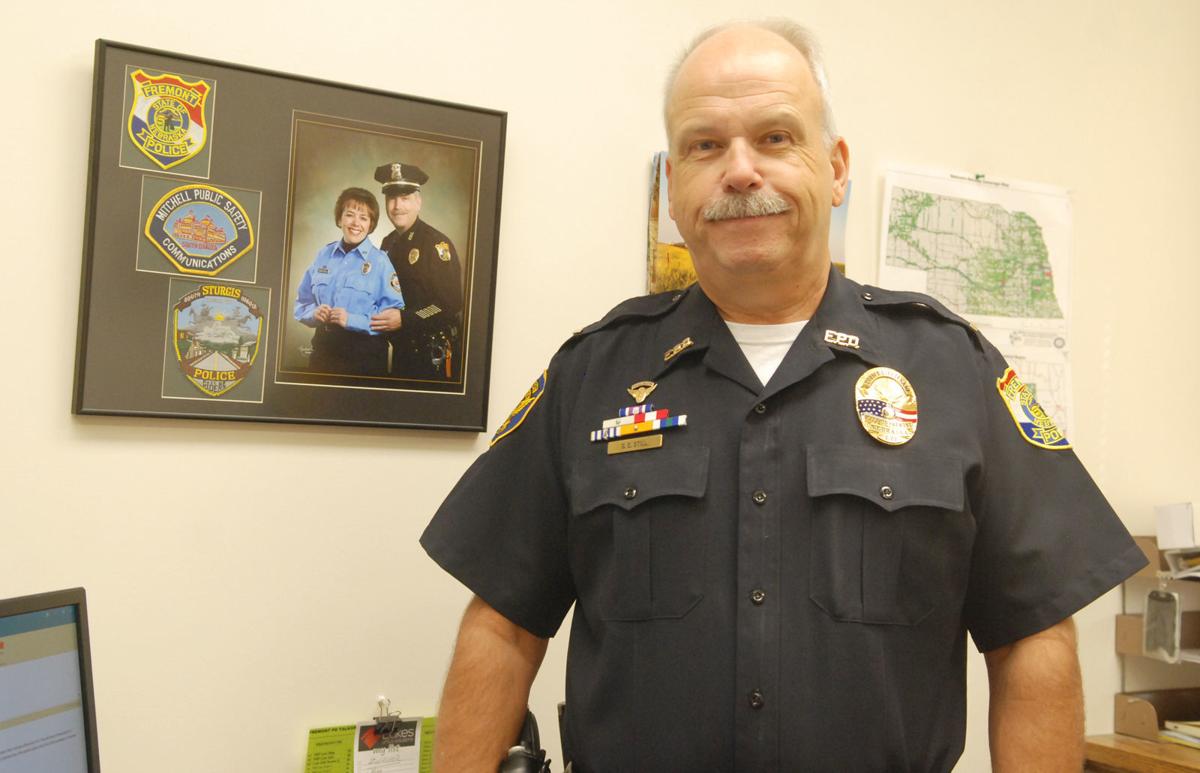 Lt. Glen Still is shown in this photograph taken just before his retirement in 2019. Still died Dec. 13. A private family burial in South Dakota will be at a later date. 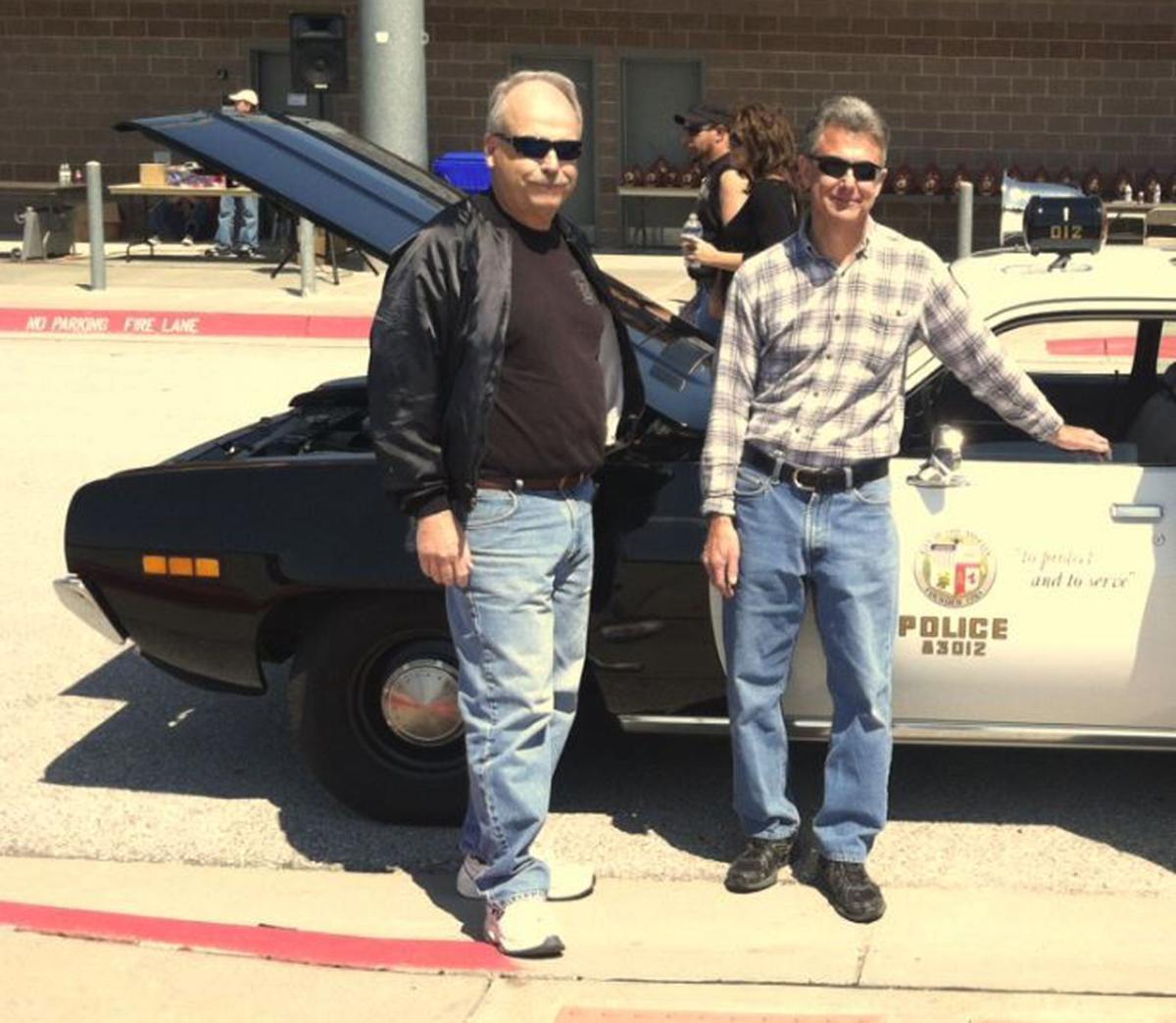 Glen Still, left, is shown with his friend Pat Toscano at a 2014 car show. The car is Toscano's Adam-12 LAPD clone. 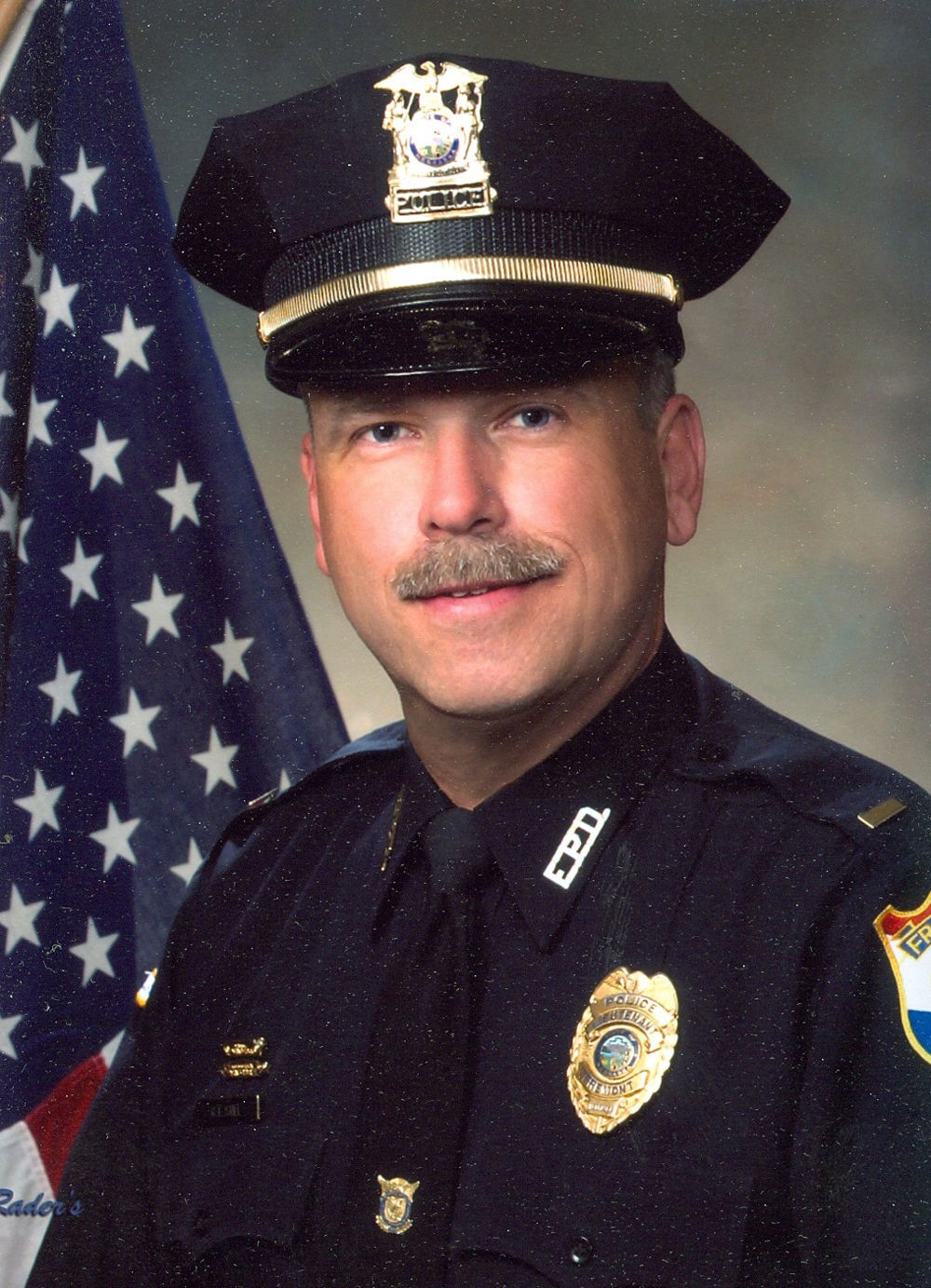 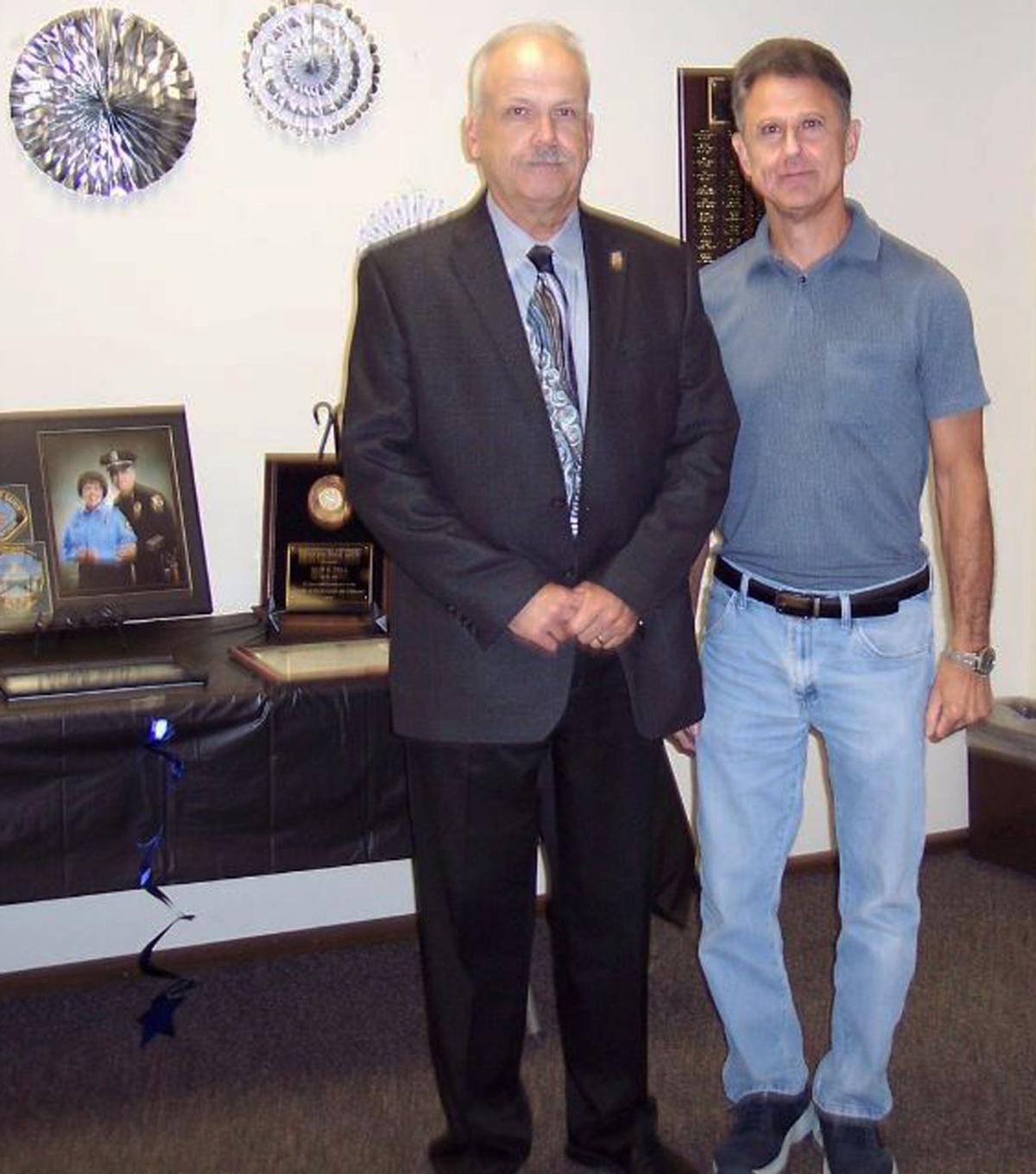 Glen Still, left, is shown with his longtime friend, Pat Toscano. Still, who served the Fremont Police Department for many years, died Dec. 13.

Pat Toscano’s first encounter with Glen Still was when he wrote him a speeding ticket.

“He had this vehicle that stood out like a sore thumb,” said Toscano, then an officer for the Fremont Police Department.

The vehicle was a blue, 1980s Chevy Blazer with the words “Still1” on the license plate.

“I didn’t know who he was then,” Toscano said. “He was just another motorist.”

But that motorist would become a police officer and the two men would be lifelong friends.

This week, Toscano shared many memories of a man he describes as intelligent and hardworking.

Still, who served the FPD for more than 36 years before his retirement, died Dec. 13.

“Glen was a career police officer,” said Fremont Police Chief Jeff Elliott. “He lived and breathed police work and the law enforcement community in Nebraska is at a loss.”

Still was working for the railroad when he became a reserve police officer.

“He probably rode with me a majority of the time and he put a lot of hours in,” Toscano said.

Still often worked midnight and afternoon shifts. He only had to be told once how to do things.

Still was a reserve officer for about 3 ½ yrs.

He was hired by the Nebraska State Patrol, but had to drop out of the academy due to a training injury. He was hired as a fulltime FPD officer in 1986.

Elliott began working for Fremont’s police department in 1989 and remembers what he learned from Still.

“He was one of the first people who kind of showed me the ropes around here,” Elliott said.

Still taught Elliott how to make traffic stops. Elliott worked at his first vehicle accident with Still, who showed him how to conduct the investigation and complete the paperwork.

During his career, Still encountered various circumstances, some of which he shared in a 2019 Tribune article.

Still remembered when he was called to a scene early one morning. It was dark when he saw a young man sitting on a street curb with a gun under his chin.

The man was distraught after breaking up with a girlfriend.

“We talked for quite some time,” Still said. “I figured if I could just keep the dialogue going with him, I could get him to put the gun down.”

They spoke as friends. Still built a rapport with the man and gained his trust. The man handed over his shotgun and Still was able to help get him some mental health treatment.

Still’s attention to detail helped while headed in an unmarked car to an Omaha meeting in 2017. On the way, he heard about a bank robbery in Fremont and then spotted a suspicious-looking vehicle.

He provided descriptions of the suspects to detectives and along with Nebraska State Patrol troopers helped apprehend three men in connection with the robbery.

As years passed, Still moved up the ranks, eventually becoming a lieutenant. He received several FPD awards, including the Chief’s Citation and Life Saving. He was a member of several professional and community organizations.

Toscano said his friend earned an associate’s degree in criminal justice, and bachelor’s and master’s degrees in public administration.

“He juggled a lot of things at one time,” Toscano said. “He had a work ethic that was next to none. If he called in sick every five years that probably was a stretch.”

During his time on the force, Still also worked for the Omaha Airport Authority for three years and as additional law enforcement for the Sturgis Motorcycle Rally for 19 years.

Years ago, Still was working at the rally when he met a police dispatcher named Wanda. They hit it off and had a long-distance relationship before marrying in September 2007.

“She was one of the best things that ever happened to Glen,” Toscano wrote in a Facebook tribute.

Toscano and Still’s friendship lasted decades. About the time Still was joining the FPD full time, Toscano was leaving to join the police department in Council Bluffs, Iowa.

They’d meet for dinner at the Brestwood Inn restaurant and after it closed they met at Godfather’s Pizza.

In later years, the men would meet with retired Detective Joyce Henke and Sgt. Bob Buer for dinner. Henke has good memories of Still.

“Glen was focused on doing the right thing and getting things done,” Henke said. “We worked together for 30 years. He was a good friend and I will miss his humor and kindness.”

“Glen was a very detail-oriented guy,” Elliott said. “He was good at handling logistics. He was very involved in seeing that all the equipment and cruisers were taken care of in the department.”

In 2019, Still retired from the police force and served as the Chief of Public Safety in Mitchell, South Dakota, until 2020 when he returned to Fremont.

Toscano and Still met for dinner in October. He noticed his friend had lost weight, yet Still seemed fine during their visit.

They planned to meet in November.

But after an ice storm was forecast, Toscano decided not to come and texted his friend.

He found it odd that Still didn’t immediately text him back as usual.

Toscano said he learned the next day that his friend had an aggressive brain tumor.

“It was like being hit in the gut,” he said.

Looking back, Toscano remembered his friend and confidant as a curious and well-rounded individual who could do so many things well.

“I liked his ambition,” Toscano said. “I liked him because he was a good friend. He’d give you the shirt off his back.”

“Glen was an easy guy to talk to,” Elliott said. “We went to all kinds of conferences and schools together. He was fun to be around. We were promoted together on a number of occasions and worked together throughout our whole careers. I’m sorry to see him gone.”

There will be no viewing, but a book signing/visitation (masks required) is planned from 4-7 p.m. Dec. 16. A private family service, which will be Livestreamed (www.Ludvigsenmortuary.com) starts at 1 p.m. Dec. 17.

Elliott said there will be a police honor guard at the funeral.

A private family burial in South Dakota will be at a later date.

You could call it a “Dress for Success.”

In a crazy year, even Santa can resort to multitasking.

Kathy Howerton wanted to do something nice for her daughter.

At first, Kathy Buhrman didn’t intend to write a book.

Meetings and events calendar for Dec. 17-19

The Fremont Coin Club will hold its monthly meeting Saturday, Dec. 19, at the Evangelical Free Church located at 2050 N. Lincoln Ave. in Fremont.

The Dodge County Board of Supervisors imposed a 90-day moratorium on the stockpiling of non-livestock waste material at its meeting Wednesday.

It’s an opportunity to find some hope.

A Day of Sharing - Methodist Fremont Health employees give back

Shawn Shanahan has seen the generosity at Methodist Fremont Health.

When John F. Kennedy went to the Hotel Pathfinder in Fremont

John F. Kennedy was a half hour late when he arrived at the Hotel Pathfinder in Fremont.

Lt. Glen Still is shown in this photograph taken just before his retirement in 2019. Still died Dec. 13. A private family burial in South Dakota will be at a later date.

Glen Still, left, is shown with his friend Pat Toscano at a 2014 car show. The car is Toscano's Adam-12 LAPD clone.

Glen Still, left, is shown with his longtime friend, Pat Toscano. Still, who served the Fremont Police Department for many years, died Dec. 13.