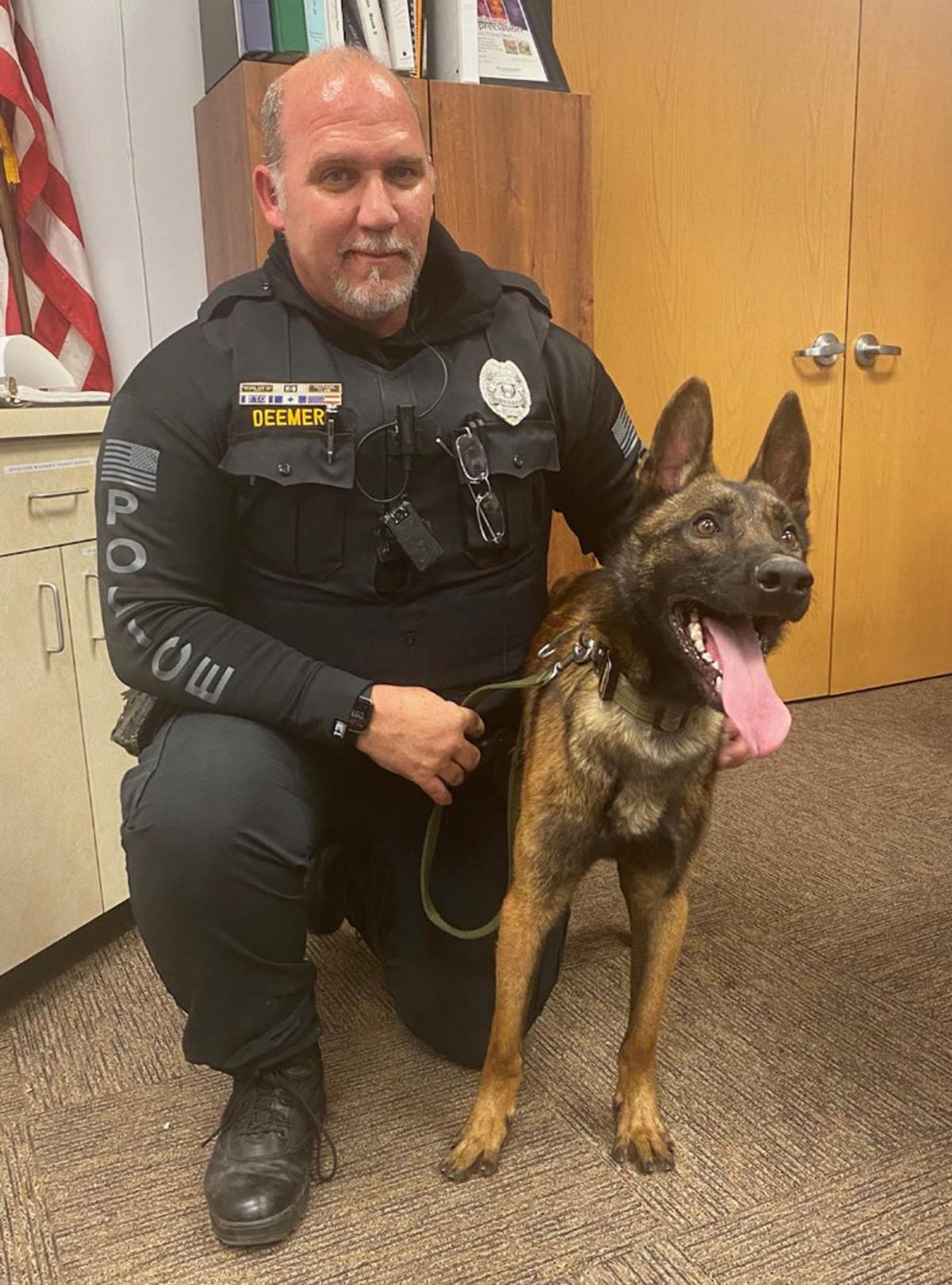 Valley Police Officer James Deemer is shown with the department's new K9, Sonic. Law enforcement will grill hot dogs and hamburgers for a fundraiser starting at noon, Saturday, June 12 in the City Park at 400 W. Vass St., in Valley. All proceeds will go to the K9 unit and the public is invited to meet Sonic. 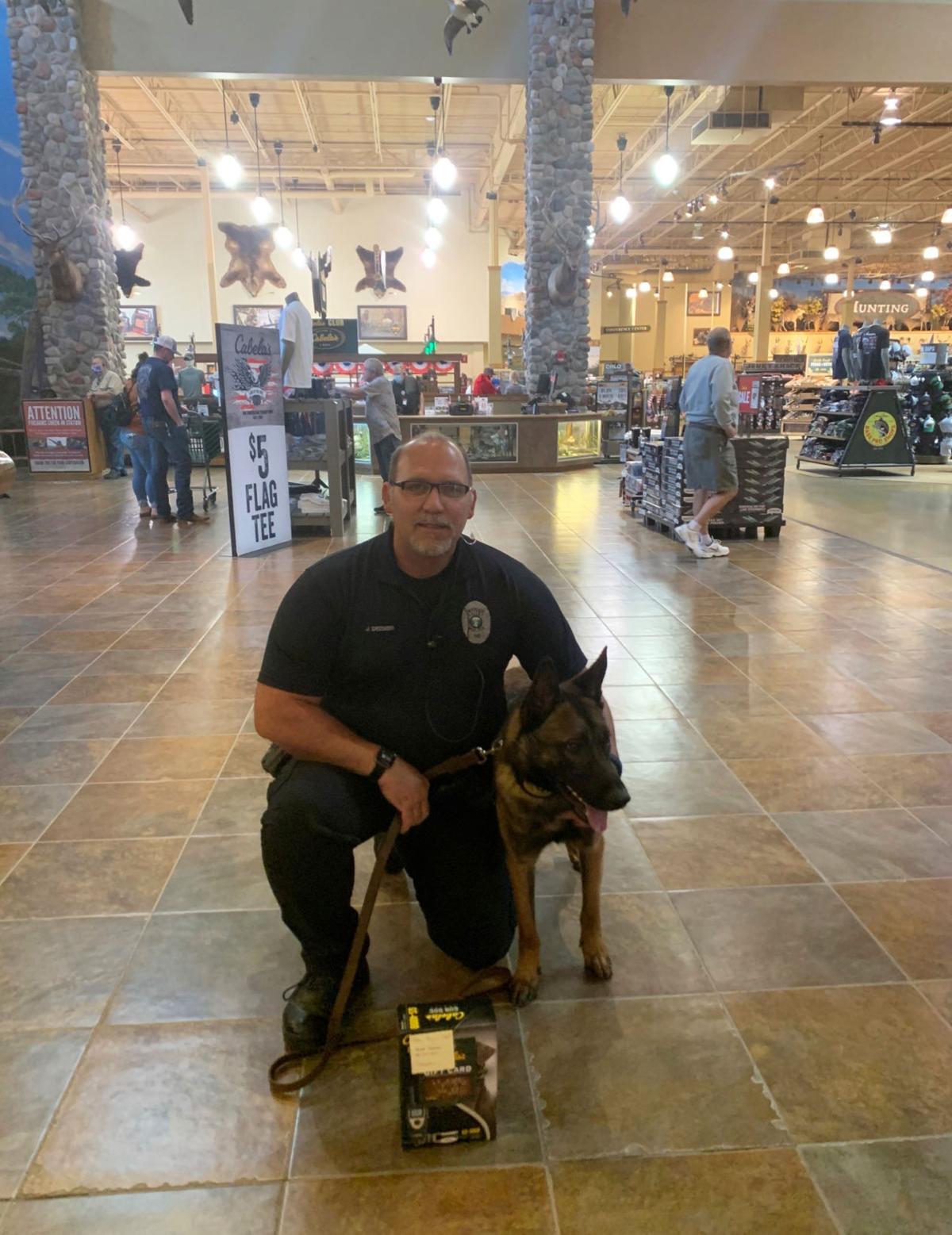 Valley Police Officer James Deemer is shown with the department's new K9, Sonic. The dog is undergoing training. Deemer speaks highly of K9s. “They’re definitely a valuable tool for us in law enforcement in a lot of ways,” Deemer said. 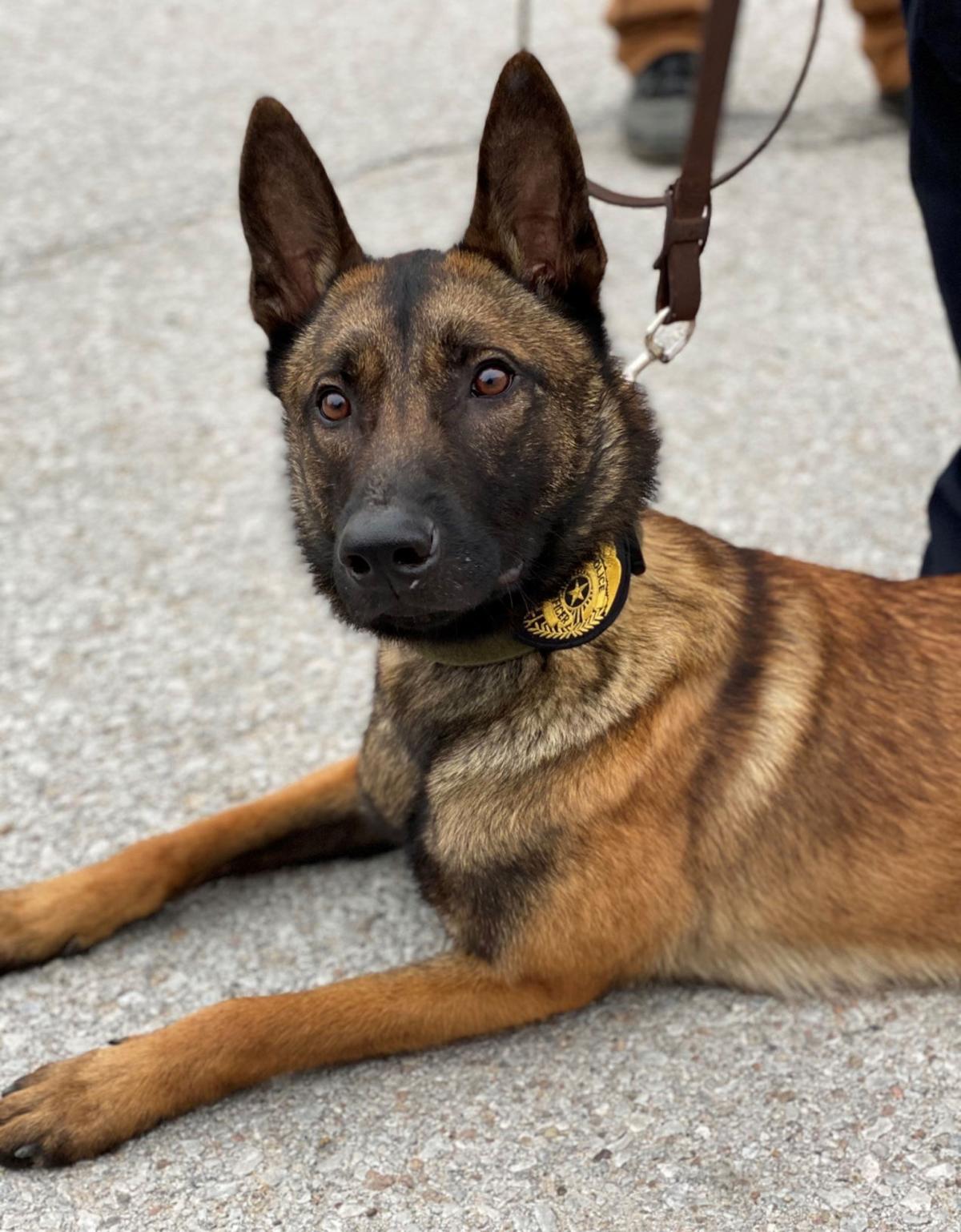 It was night when he and a K9, named Katie, made a traffic stop in Iowa, where the dog detected the odor of drugs. The driver was outside the vehicle as Deemer and Katie made a search in and around it.

“As I was talking to the driver, she kept putting herself in front of me to protect me from that driver, because she could smell the odor coming from that person,” he said.

Since nothing was found in the vehicle, Deemer said he didn’t have the right to search the noticeably nervous driver and so he released him.

Then Deemer learned the suspect had a warrant for his arrest. Deemer arrested the suspect and searched him for weapons. That’s when he found drugs in one of the suspect’s pockets.

Although Deemer wouldn’t say the dog saved his life, Katie definitely detected what she’d been trained to find.

Many years later, Deemer is an officer with Valley Police Department and he has a new K9, named Sonic. The 16-month-old Belgian Malinois is undergoing training.

Valley’s police department has launched a campaign to raise $40,000 for the entire K9 program, which includes the cost of the dog, all of the training, and a K9 vehicle.

The vehicle will include an area for the dog with fans and a backup battery system so it will roll down the windows and open a door to let the dog out in case the engine stops running or there is some other malfunction.

Deemer will carry a device that will open the vehicle’s door so the dog can come to his aid.

Law enforcement officers will grill hot dogs and hamburgers for a freewill donation starting at noon, Saturday, June 12, in the City Park at 400 W. Vass St., in Valley. All proceeds will go to the K9 unit and the public is invited to meet Sonic.

Donations, referencing the K9 fund, may be sent to the City of Valley, 203 N. Spruce St., Valley, NE 68064 and there is a gofundme page at https://www.gofundme.com/f/valley-police-k9-sonic.

No donation is too small.

“A little girl gave me 50 cents because she wanted to donate her ice cream money for the dog,” Deemer said.

Sonic is the fourth K9 with whom he’s worked. One of the K9s he worked with years ago died tragically through no fault of Deemer.

It’s still painful and he prefers not to discuss it.

Deemer knows the unique bond that develops between officer and dog.

“When you work with these dogs, they become part of you,” Deemer said. “They live with you. They eat and sleep with you. You spend your off-duty time with them as much as your on-duty time.”

“You develop that bond that you know what he’s going to do. He knows what I’m going to do,” Deemer said.

The dogs have a keen sense of hearing and smell and even riding in a vehicle may spot something the officer doesn’t. The dogs give 110%.

Deemer’s experience as a K9 handler goes back years.

Originally from Tekamah, he left there in the mid-1980s and served in the U.S. Army as a weapons specialist before transferring into a sentry dog unit for a Ranger battalion.

After the military, he began working for the Washington County Sheriff’s Department later transferring to the Crawford County department in Iowa, where he became a K9 handler in 1997.

That’s where he worked with Katie, a Belgian Malinois, known as a dual purpose dog — trained in narcotics detection, tracking, apprehension and handler protection.

Deemer had the only dog for five surrounding counties.

“Needless to say, I was very busy,” he said.

Together, they were involved in narcotics searches and some apprehensions.

“I had her for over a year,” he said. “She was an older dog and developed hip dysplasia.”

Deemer and Rico made several vehicle and home searches. They assisted the Iowa State Patrol. He recalls a residential search where the dog helped law enforcement officers find $15,000 with the odor of drugs on it.

“That was after the deputies had searched the residence,” he said. “Without a dog, they would have never found the money, just because of the way it was hidden.”

Deemer and Rico worked together for about three years. Since Rico was property of the county, he stayed behind when Deemer decided to return to Nebraska in 2004.

He worked for the Burt County Sheriff’s Office and then was hired at the Valley Police Department in 2014.

Valley’s police department has had K9s before Deemer’s tenure. About five years ago, an officer sought to have a K9 program, but the timing wasn’t right for the city, Deemer said.

“We’ve had need before,” Deemer said. “Prior to us getting one, we’ve had to rely on Douglas County Sheriff’s Office or Omaha PD.”

But those departments often were busy conducting their own stops with their dogs.

Deemer said two Omaha Police Department K9s along with the Able 1 helicopter came at Valley’s request to search for an armed suspect in a field a couple years ago.

A K9 made an apprehension that night and the suspect was taken into custody without injury to human officers or the dog.

Without the dog, the only other option would have been for human officers to confront the armed suspect, Deemer said.

In March 2021, Deemer said he was asked to head the department’s K9 unit for Valley.

He presented a K9 proposal to Valley Mayor Cindy Groves and the council voted unanimously to move forward with the K9 proposal in April.

Deemer and Sonic have been invited to train with Omaha Police, but are waiting until the last payment is made on Sonic.

The K9 will be trained to detect marijuana, methamphetamine, cocaine, heroin and hallucinogenic mushrooms. He also will be trained in handler protection, tracking and apprehension to take suspect into custody.

Sonic will be available to any agency that requests a dog for situations such as building searches, barricaded suspects, vehicle searches and other issues.

“A K9 can search a building way faster than a human can,” Deemer said.

The dog will be available for school demonstrations.

“We’re planning on integrating him with the school in Valley to do presentations, locker and bus searches, whatever the school would request,” he said.

Deemer said Sonic is intelligent and learns quickly. The dog loves ice cream and hates bedtime, often whining for about 15 minutes until he realizes Deemer isn’t going to get up and play with him.

Sonic is happy-go-lucky around Deemer’s house.

The first time Sonic met Deemer’s 21-year-old stepdaughter, Elizabeth Garcia, who has a traumatic brain injury from a vehicle accident, was tender.

“He literally jumped up into a recliner laid on his back and put his feet in the air like, ‘I’m home,’” Deemer said. “He was like this big, ferocious dog who turned into a lap dog within seconds.”

At work, Sonic is an entirely different dog.

Calendar of events for June 9-11

Find out more about this week's Concert in the Park, a special Fremont City Council and Planning Commission meeting, and what's on the schedule at Fremont Eagles Club.

Work to begin on the Western Douglas County Trail in Valley

Weather permitting, work will begin June 14 on the Western Douglas County Trail. There will be various lane and road closures along 270th Stre…

Water value to be replaced on Wednesday

The Fremont Water Department will be replacing a water valve on Wednesday, June 9.

Valley Police Officer James Deemer is shown with the department's new K9, Sonic. Law enforcement will grill hot dogs and hamburgers for a fundraiser starting at noon, Saturday, June 12 in the City Park at 400 W. Vass St., in Valley. All proceeds will go to the K9 unit and the public is invited to meet Sonic.

Valley Police Officer James Deemer is shown with the department's new K9, Sonic. The dog is undergoing training. Deemer speaks highly of K9s. “They’re definitely a valuable tool for us in law enforcement in a lot of ways,” Deemer said.