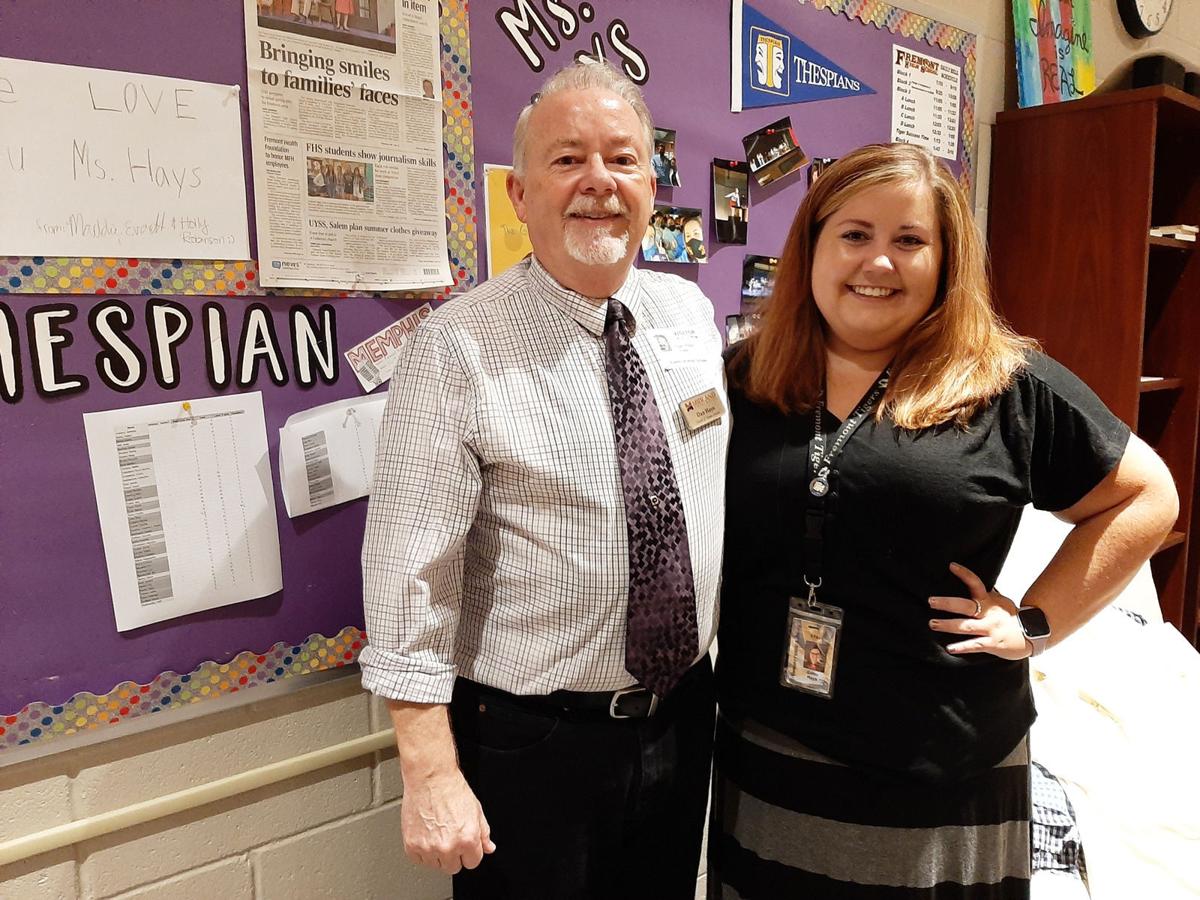 Dan Hays, director of theater at Midland University, stands near his daughter, Caitie, who is the theater teacher at Fremont High School. 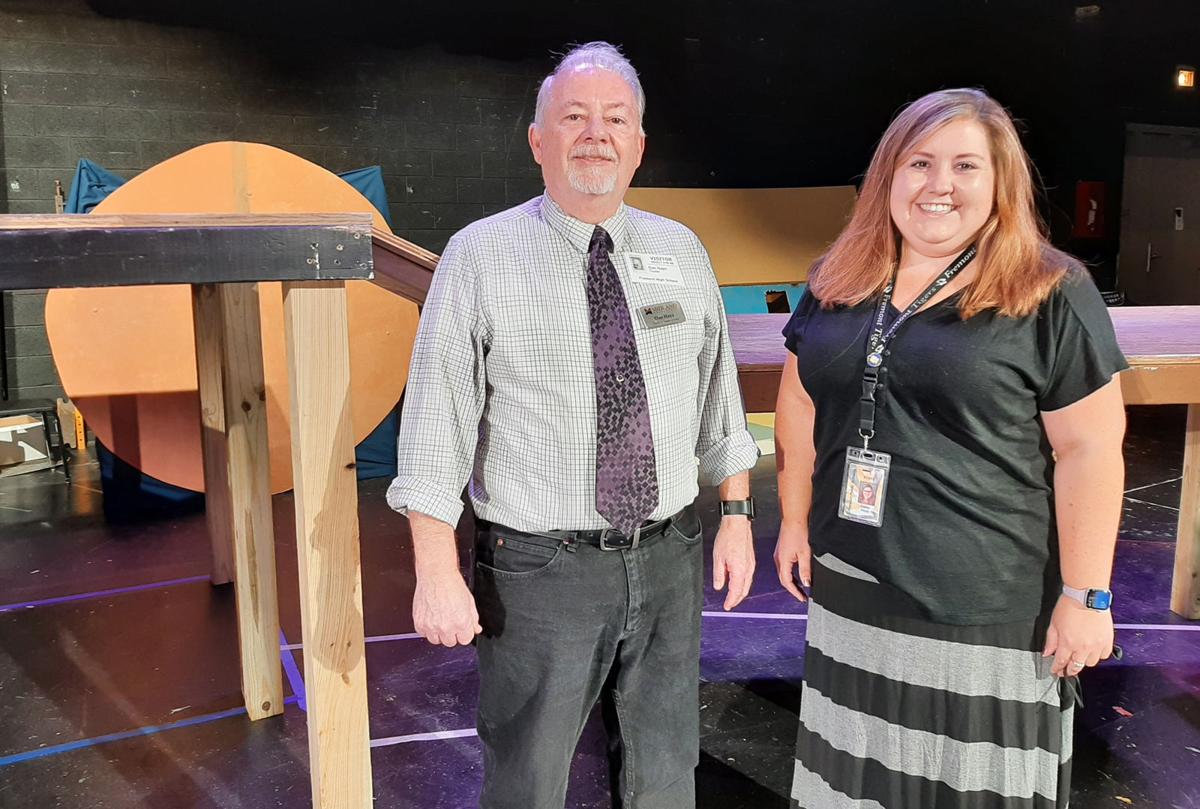 Dan Hays, director of theater at Midland University, stands near his daughter, Caitie, who is the theater teacher at Fremont High School. The two are on the stage at the high school.

When it comes to theater, it’s all in the family for Dan and Caitie Hays.

Dan Hays is director of theater at Midland University and his daughter, Caitie, is the theater teacher at Fremont High School.

The cooperation between the two theater programs has worked well.

FHS students have been able to see Midland shows and be involved in workshops with university students.

The two theater departments have shared costumes and other items.

Two of her FHS seniors from 2021 are enrolled at Midland this fall.

The Hays’ love of theater began years ago.

Dan Hays is from Oxford (now Southern Valley) in Nebraska, where he said the school had a great music program and staged musicals.

When he was in seventh grade, Hays played, Lewis, the son of Anna in the musical “The King and I.”

“I knew that (acting) was what I wanted to do for a career,” he said.

His acting opportunities would include travel with the Young Americans, a Southern California-based performing arts group.

He’s had a broad range of experiences as a professional actor.

“I’ve worked all over, lots of places in the United States,” Hays said.

Hays worked at the former Firehouse and Upstairs dinner theaters in Omaha. He performed at the Omaha Community Playhouse. He played Peter Pan in the Emmy Gifford Children’s Theater in Omaha.

He played the title role in the world premiere of “Geech: The Moosical” in Kansas City. He was Sancho in “Man of La Mancha” at the Mule Barn Theater in Tarkio, Missouri.

Hays met his wife, Kathy – now director of student success for Midland’s arts department – when she performed at the Ralston Community Theater, where he did choreography.

Their children, Caitie, and Patrick, now a vocal music teacher at Blair Middle School, would follow in their parents’ theatrical footsteps.

Caitie was a little girl when her dad was giving notes to cast members for the musical “Oklahoma.”

“I guess I got up on stage and started doing some of the choreography,” she said.

Caitie was 7 years old when she auditioned for her first show. She played Gretel in “The Sound of Music” at Elkhorn Community Theatre.

“I think I’d already been in love with theater, but that just kind of solidified it,” she said.

Caitie was involved in Elkhorn Community Theatre while in elementary and middle school.

At Elkhorn High School, she was involved in one-act plays and musicals. She was nominated for best actress for the Orphan Train. Her senior year, she was Gertrude in “Seussical the Musical.”

By the time Caitie was at Elkhorn High School, her dad – who entered teaching later in life—was the vocal music instructor there, and directed the musicals.

That was a huge blessing, she said, and also something that made her a little tougher when she earned roles or solos – then was told by some peers that she only obtained them because of her dad.

“I think my dad would be the first one to say that he was almost tougher on my brother and I when we were in high school, just because he didn’t want us to ever feel like we didn’t earn any solos or roles in musicals,” she said. “I’m really grateful for that now.”

She believes her father’s high expectations probably made high school easier for her, because she honestly could tell her friends how hard she had to work to earn a role or solo.

After graduating from high school, Caitie joined the Young Americans.

“It was a great opportunity, because I got to travel the world with them,” she said.

Living on a tour bus, she toured Germany, the United States and Canada, and England, Ireland and Canada.

She also was in the musicals “Brigadoon,” “My Fair Lady” and “The Music Man” in California.

Broadway stars played the leads in these productions. For instance, Susan Egan, the original Belle in Beauty and the Beast on Broadway, starred in “Brigadoon” and “My Fair Lady.” Tony Award-winning actress, Kelli O’Hara, was in “The Music Man.”

Approximately 20 Young Americans, including Caitie, were selected to be on stage with these and other well-known performers.

Caitie and her dad shared other experiences. Dan served as director for the Young Americans, touring Germany with Caitie and the United Kingdom with Patrick.

She later went to Nebraska Wesleyan, where her dad was the head of musical theater.

“We’ve spent quite a bit of time together, professionally and academically, and we got to do a lot of shows together,” she said.

They were even on stage together for the musical, “The Pirates of Penzance.” He played the modern Major General and she played one of the daughters.

“So we actually got to be father and daughter on stage,” she said.

After graduating in 2014 from Nebraska Wesleyan, she moved to Chicago where she was involved in professional theater for about three years.

Her roles included Wendy in “Peter Pan” at a children’s theater.

To support herself, she was a professional banker at Chase Bank.

But Caitie wanted a professional career in theater.

So she moved back to Nebraska and earned a master’s degree in education from the College of Saint Mary.

Her career in Fremont had an unusual start.

She was hired at FHS one week before the March flood of 2019. And with 2020 came the worldwide pandemic.

The 2020 spring play was canceled. The fall play in 2020 was a cabaret, staged virtually due to COVID restrictions.

“Last year, we were able to do our one-act, in person, with a lot of restrictions and for the first time in 16 years, Fremont High School went to state in one-act and we got third at state,” she said.

The one-act was a 30-minute presentation of “The Miracle Worker.” Shannon Engel was named “Best Actress” in Class A at state.

“We had a really good year,” Caitie Hays said.

“The awards are nice, but I do this because I love my students and I think theater taught me – and I think it teaches my students – how to have self-esteem, how to be courageous, how to step outside of themselves and probably my favorite thing is – it teaches them empathy,” she said.

Being a character and having to step into someone else’s shoes, understand their life and tell their story, teaches people how to empathize with others.

That’s something Caitie believes people always need, “because you never know what’s going on in someone else’s life.”

Besides directing shows at Midland, Dan Hays remains active in theater, most recently appearing in the musical comedy, “Murder for Two” at Fremont Opera House.

He looks forward to the Midland students’ next production, the musical “White Christmas,” set for Nov. 11-14.

Caitie is looking forward to the Fremont High School production of “Peter and The Starcatcher,” set for 7:30 p.m., Oct. 1-2.

In the meantime, she continues to appreciate her theatrical heritage.

“It’s really cool to grow up having your parents, not just be people you love and look up to, but that you actually kind of want to model your life after,” she said. “When you look at the career paths my brother and I have taken, we’ve become our parents. We might joke about that, but growing up seeing the impact our parents made on the students they worked with – I don’t think there’s a better way we could spend our professional careers.”

Construction of a new airport terminal is progressing with a Feb. 1 completion date.

The Youth Philanthropy Contest is back.

JCF Days board has some new members

It’s time to look ahead.

Fremont-area calendar of events for Sept. 21-23

Find out more about area meetings and events planned for Sept. 21-23.

With each year that the Fremont Area Chamber of Commerce’s Beer Fest is held, Executive Director Tara Lea said businesses up the ante a little bit.

Grief support group to be offered in October

Tractors ready to roll for a cause

Don’t be surprised if you see several tractors in Fremont or other area towns on Saturday.

For decades, Karen Carstensen and her son, Tim, really have gone the extra mile to help people in need.

After making his Rose Theater debut in June, Fremont Bergan graduate Trey Mendlik is back performing at the Omaha theater.

If you're looking for something to do this weekend, the Fremont area is full options.

You don’t have to be Ken Jennings of Jeopardy! fame to enjoy a little trivia.

Seniors and their families invited to Memory Lane Cafe

Dr. Marilyn Peterson is the 2021 recipient of the Cozad Library Foundation’s Make Your Mark on Cozad Award.

Midland University has announced its recognition as an Apple Distinguished School through the end of the 2023-24 academic year.

Dan Hays, director of theater at Midland University, stands near his daughter, Caitie, who is the theater teacher at Fremont High School.

Dan Hays, director of theater at Midland University, stands near his daughter, Caitie, who is the theater teacher at Fremont High School. The two are on the stage at the high school.