Dick and Donna Brandenburgh have transferred ownership of Dick's Zesto, located at 225 W. Military Ave., after 58 years in the Brandenburgh family. 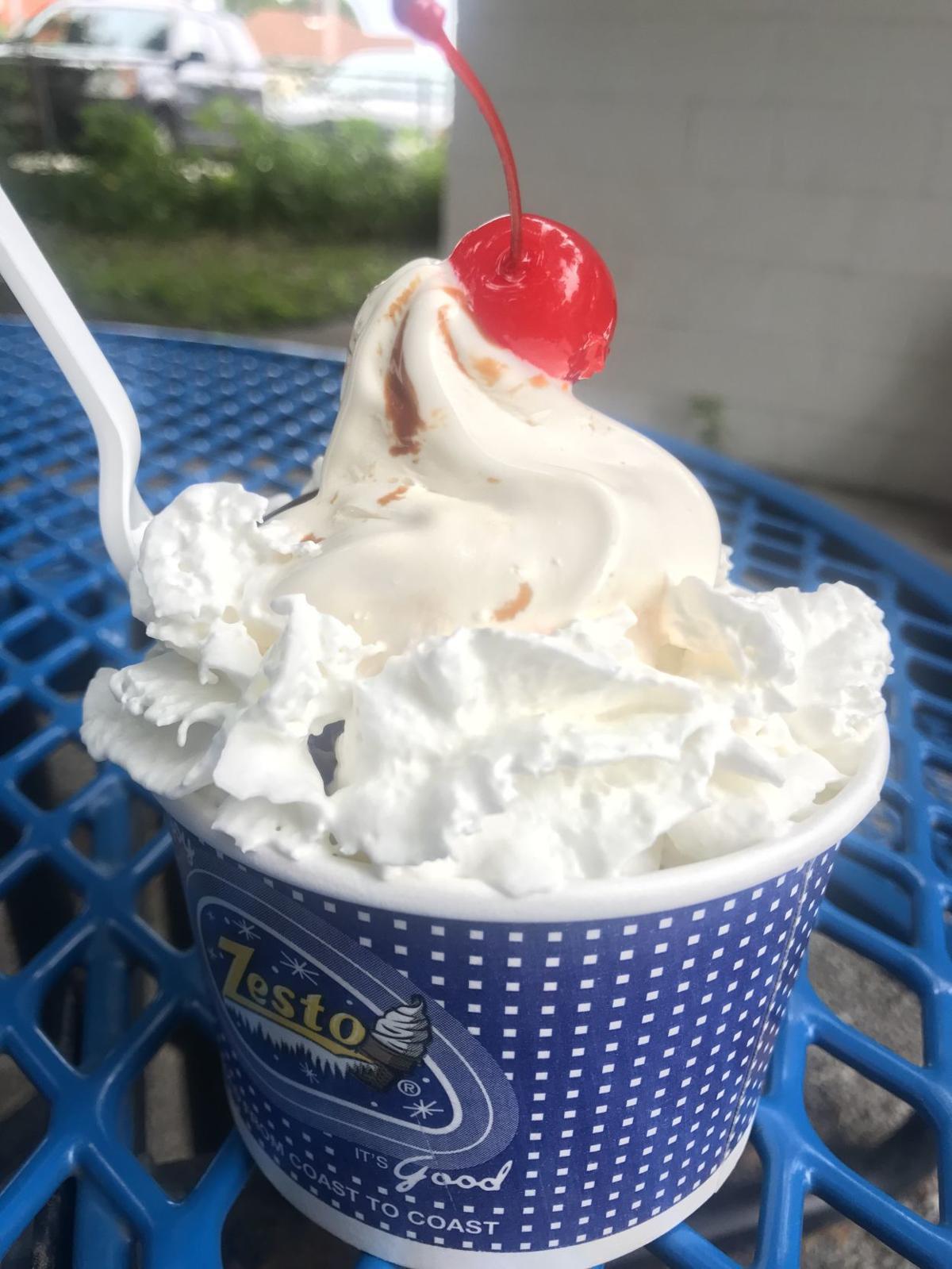 A dish of ice cream from Dick's Zesto, located at 225 W. Military Ave. The ice cream shop was recently sold to Chad and Mimi Henggeler.

After over two decades of running Dick’s Zesto together, Dick and Donna Brandenburgh have transfered ownership of the ice cream shop to Chad and Mimi Henggeler.

Donna Brandenburgh said the decision came after the two decided that the work was becoming too much for them to handle, as she fought cancer four years ago as well.

On Thursday, the Henggelers took over ownership, with the Brandenburghs staying on another month to train them for running the shop, located at 225 W. Military Ave. in Fremont.

Mimi and Chad Henggeler, who has also been the owner of the Godfather’s Pizza location in Fremont for 20 years, will run Zesto along with his uncle and aunt in Texas, Pat and Michelle.

“Me and my uncle have talked about it for years and said if it ever came up for sale, we were going to try and buy it,” Chad Henggeler said. “And it did, and we did.”

Although Zesto was founded in Missouri in 1945, a majority of the restaurant’s locations are in Nebraska, Indiana and South Dakota. The chain sells ice cream, along with hamburgers and milkshakes.

Zesto was first opened in Fremont by Helen Smith in 1948 at the corner of Fourth and Bell streets, where the Sweet Shoppe currently resides. Sometime in the mid-1950s, Smith moved the shop to where it is today.

In 1962, Dick Brandenburgh’s parents, Richard and Merlene, moved to Fremont from Scottsbluff to run the shop when he was in the seventh grade. He helped run the shop along with his other brothers, as well as Donna Brandenburgh, who joined in 1976.

The Brandenburghs ran Zesto until 1993, when Richard Brandenburgh passed away. Although Merlene Brandenburgh ran the shop on her own for several years, in March 1998, she passed the torch to Dick and Donna Brandenburgh, who quit her job to take ownership.

“Because it’s been in the family for so long, I just wanted to continue it,” Dick Brandenburgh said. “So everything changes to a point, but after 58 years, it’s time to move on.”

Donna Brandenburgh said the family atmosphere, which included their children working at the shop, also extended to their staff.

“You get so attached to your employees, where they’re part of your life and you’re part of their lives forever,” she said. “That is what I’m taking away, is how much I’m going to miss my employees, both of us.”

Even the customers became a part of the family, as Dick Brandenburgh said he would get to know them personally over the years.

“And their kids bring their kids, and it’s just three or four generations down the road, just building a relationship like that,” he said. “That’s the fun side of it.”

Over the next month, Henggeler said he will be learning the ropes with his wife on their first business adventure together.

“The next month will be hard, as we’ve got to learn everything like trucks and making the food,” he said. “We have good help there right now, so that always helps.”

In running Godfather’s as well, Henggeler said his partners will be able to help him focus on making the transition as easy as possible.

“My aunt Amy is my partner at Godfather’s, and she brings a lot to the table at this time,” he said. “She’s helped me out a lot through this transition, so it’s just been smooth.”

Although Donna Brandenburgh said she doesn’t know if she will continue to work at the shop, she will take it day-by-day to see if she will join her husband, who plans to continue working.

“I told the new owners I’d like to stay here a couple days a week, just to show up, and they were really open to that,” Dick Brandenburgh said. “They liked the idea of me being around, and customers can just see my face.”

Even with the COVID-19 pandemic taking place, Dick Brandenburgh said he felt confident with Zesto’s measures during the ownership transfer.

“We don’t have inside seating, we just have the walk-up window, and we’ve been staying pretty busy for the most part,” he said. “People have been doing pretty good about keeping their distance and have everything marked outside, so I don’t think we ever missed a beat.”

Similarly, Donna Brandenburgh said she also felt that Zesto would be in good hands with the Henggelers.

“I feel very fortunate that there was a good family that is taking it over, and especially at this time with COVID,” she said. “It’s always hard to see someone else come in and change things, but that’s what’s going to happen.”

Henggeler said he was looking forward to keeping the good name of Zesto as he and his wife take ownership.

“I’m just excited for something new, and hopefully we can make it work,” he said.

As he steps down from owning Zesto after its 58 years in the family, Dick Brandenburgh said he’ll miss his daily routine of running the shop.

“I’m going to miss coming down here everyday and seeing familiar faces and working with the customers,” he said. “I just enjoyed that the most and getting new kids in here and watching them grow up.”

Although she doesn’t know what her future is at Zesto, Donna Brandenburgh said she knows her customers will stay in her heart.

“We’ve gotten to know some of them really well, and over all these years, I’m going to miss our customers, too,” she said. “Because even if they may not know your name, they know who you are.”

The Fremont Fire Department responded to a fire on Thursday afternoon at 145 S. Somers Ave.

Since its creation in 1787, the Constitution of the United States has been studied and used as defense in multiple court cases every year.

Dick and Donna Brandenburgh have transferred ownership of Dick's Zesto, located at 225 W. Military Ave., after 58 years in the Brandenburgh family.

A dish of ice cream from Dick's Zesto, located at 225 W. Military Ave. The ice cream shop was recently sold to Chad and Mimi Henggeler.