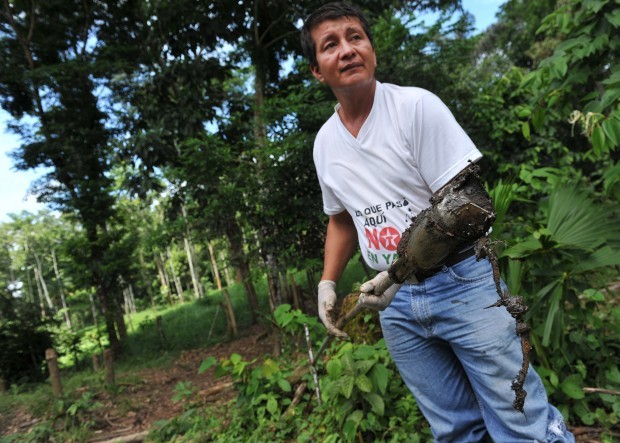 Donald Moncayo, an Ecuadorian farmer who has been in a legal battle against Texaco/Chevron for years, pulls up a soil sample from his farm near Lago Agrio. (Dean Jacobs, Fremont Tribune) 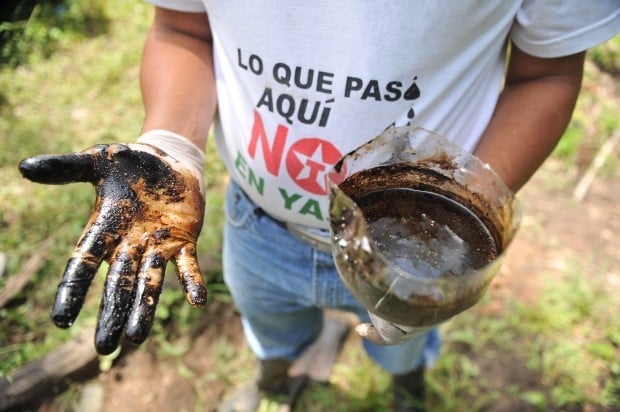 Donald Moncayo, an Ecuadorian farmer who has been in a legal battle against Texaco/Chevron for years, demonstrates what happens to the soil sample taken from his land when mixed with water. (Dean Jacobs, Fremont Tribune)

"We know there is oil under our ground. We want it left alone. We have seen the ways the Western culture destroys the nature to get access to the oil and do not want this on our land or in our lives. We are happy living our way of life."

These words of the Achuar chief nagged at me as I boarded the plane for Lago Agrio.

Lago Agrio, which means Sour Lake, is named after the U.S. headquarters of Texaco. It was the first oil company to explore this part of the Amazon basin.

Now owned by Chevron, it is the location of one of the worst oil disasters in the world.

According to Amazon Watch, more than 900 oil deposit pools, or holding pits, containing the leftover aspects of oil production are spread across the region. (Amazon Watch is an organization dedicated to protecting the Amazon and the indigenous people who live there.) The abandoned or poorly maintained pits leak into the ground and surface water, contaminating the drinking water supply for 30,000 indigenous people.

I decided to go see for myself. A Swiss companion from the tour, Doris Rageltti, asked to tag along. Her Spanish translation skills turned out to be a huge gift.

As we entered Lago Agrio, it looked like a normal South American town that was surrounded by lush tropical forest. The road into the center of the town was lined with oil production companies.

Large tanker trucks rushed up and down the dusty road.

What little I could research about Lago Agrio wasn't so positive. Be careful in this border town with Colombia was the consistent message.

Luck was with us, though, as Donald Moncayo met us at the airport. He is an Ecuadorian farmer who has been leading the legal battle against Texaco/Chevron for years.

He also is in charge of ADAT, an organization dedicated to documenting the impact of the oil extraction on the local people living here.

Moncayo stood in front of a bookshelf filled to the top with legal files.

"These are the cases against Texaco/Chevron. Over 1,000 have been filed. If we are lucky, the court will see a handful," Moncayo said.

"At first the oil companies tried to call me a terrorist," he said with a smile, "in an attempt to have me go away. But with no proof, they gave up on the idea."

This was clear because everywhere we went for three days, we encountered people who knew Moncayo and treated him like a hero. It was obvious that the community revered him; even those who worked in the oil fields respected him.

The surface of the pit rippled as we walked gently along the edge. There was no clue of the pit's existence because it was covered with tropical plants.

With a shovel, Moncayo dug into the surface to reveal the oil extracts below.

He showed us these pits in several locations. Then Moncayo explained how a pipe is inserted on the top of the lip. When the rains come, which in a rainforest is often, the surface water runs off into the streams.

Many of the oil pits had pipes positioned to remove rainwater overflow. We saw and smelled the oily landscape created by the escaping oil.

"This goes directly into the streams where poor people bathe and use the water for cooking," Moncayo explained, "Eventually, it enters the Amazon River to the east and the home of animals like the pink dolphins."

Back on his own farm, Moncayo used a device to pull a soil sample from four feet below.

"This is the land that Texaco/Chevron claims in its court case it cleaned up," he explained.

He took the soil sample and mixed it with water. A blue oily film was quickly visible. He held the bottle to my nose; it smelled like an oil pit in a gas station.

"I have to spend $10 a week on water because I can't safely drink the water on my own land. But it is worth it. I have a young daughter and it is my dream that she has a good life."

It left me wondering about those who can't afford or don't have $40 a month for drinking water in a poor country like Ecuador.

Then Moncayo surprised me by what he said next.

"I am aware of the pipeline fight in Nebraska. Please tell your people now is the time to fight - before it is built - if they want to live and have their children live a life in a clean and safe environment."

Dean Jacobs is a world traveler and former Tribune photographer. Follow his latest journey each week in the Tribune.

Video: A message to Nebraska

Donald Moncayo, an Ecuadorian farmer who has been in a legal battle against Texaco/Chevron for years, pulls up a soil sample from his farm near Lago Agrio. (Dean Jacobs, Fremont Tribune)

Donald Moncayo, an Ecuadorian farmer who has been in a legal battle against Texaco/Chevron for years, demonstrates what happens to the soil sample taken from his land when mixed with water. (Dean Jacobs, Fremont Tribune)