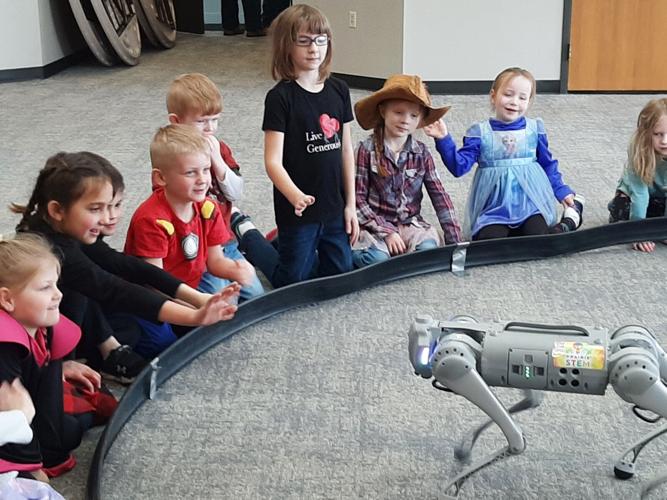 Children at St. Paul's Lutheran School in rural Arlington react to Bingo, the robot dog, who was there on Monday as part of the National Lutheran Schools Week celebration. 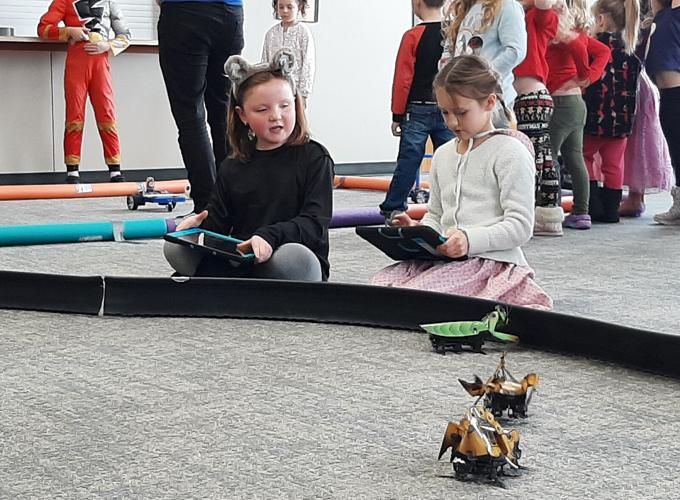 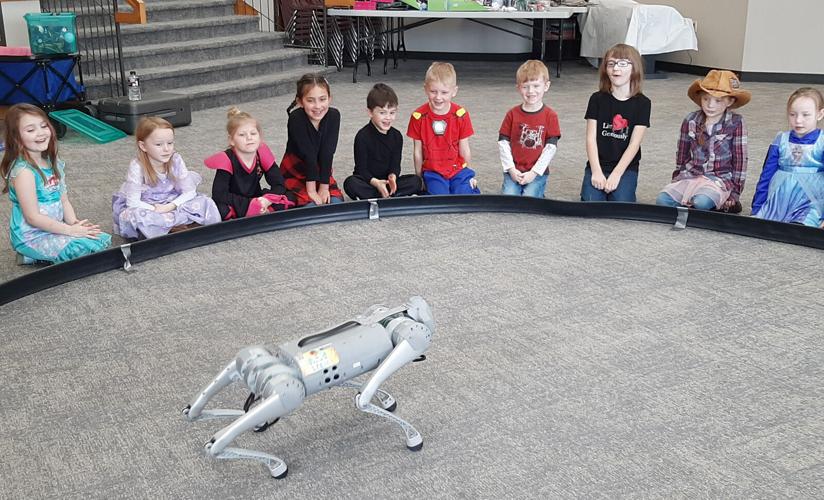 Young students at St. Paul's Lutheran School in rural Arlington react to Bingo, a robotic dog, on Monday afternoon as part of the observance of National Lutheran Schools Week. 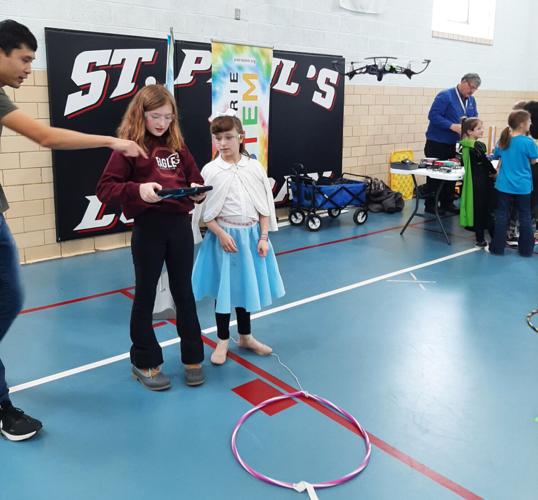 Brant Abeln, left, a volunteer for Prairie STEM instructs Noelle Warm, left, and Molly Petersen on Monday afternoon during a drone flying session as part of National Lutheran Schools Week at St. Paul's Lutheran School in rural Arlington. The drone is at the upper right. 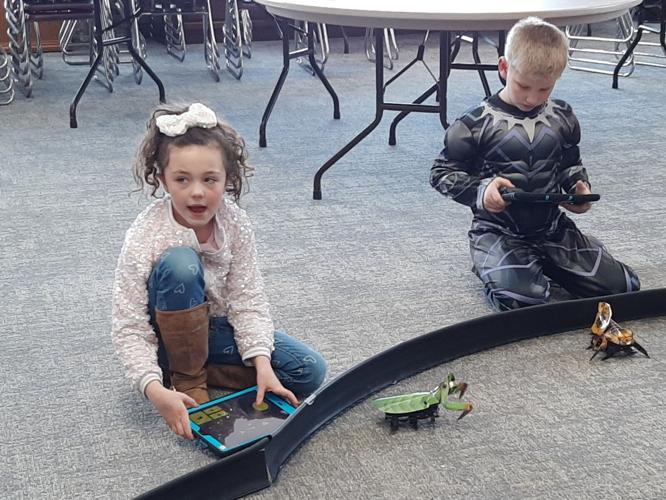 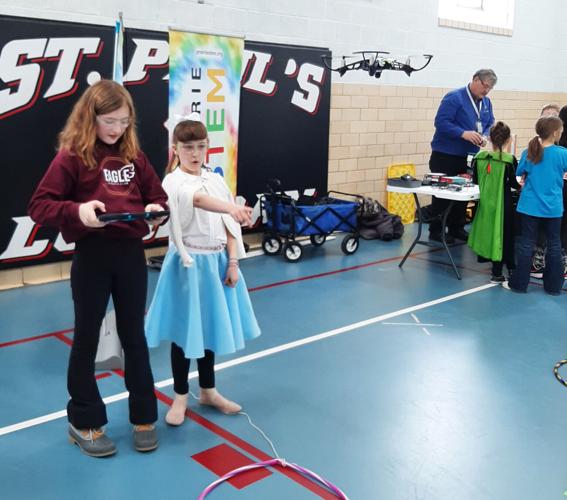 Bingo, the robotic dog, doesn’t have long flowing fur or a fluffy tail.

But it can dance and roll over.

That was enough to delight children at St. Paul’s Lutheran School at Arlington on Monday afternoon.

Jeff Ingraham, chief operating officer of Prairie STEM, said six staffers came to the school to engage students in the activities and help them understand the importance of science, technology, engineering and math.

“Hopefully, they can see themselves in a career like that and be the next astronaut, the next engineer that designs incredible inventions,” Ingraham said.

Third- and fourth-grade teacher, Dana Schmidt, smiled as she watched students use touchscreen tablets to steer small drones and try to land them inside hula hoops or baskets.

“It gives them an opportunity to learn about technology using the drones and it’s fun,” Schmidt said, adding, “Not many get the experience to play with or use them. It’s also a good opportunity if they want to see if that’s something they want to do when they grow up — be a drone driver.”

Students flew the small drones inside the school gym.

Fourth-grader Noelle Warm and Molly Peterson, a third-grader, carefully monitored a tablet while guiding a drone.

“It was a lot of fun,” Molly said afterward. “The obstacles were fun to go around.”

Activities were divided into stations in different locations within the school.

While drone stations were situated in the gym, Ingraham said about five different kinds of robots — including the robotic dog — were in the cafeteria.

“It’s the only one in the Omaha area that we’re aware of,” he said of the robot dog.

First- and second-graders laughed and waved at Bingo, the dog bot, especially when it stopped and rolled over. The robotic dog danced and pranced and sat up, too.

Before seeing Bingo, children had the opportunity to use tablets to make small, insect-like or arachnids-like robots scurry around a ring.

The children donned costumes as part of NLSW.

Dressed like pioneer author Laura Ingalls Wilder, Lydia Petersen reminded attendees of a much earlier era even as she and Katelyn Hilgenkamp, decked out in kitty ears, used tablets to guide their bug bots.

Students in another area laughed as they steered robot cars.

First- and second-grade teacher Shelly Meyer smiled almost as much as the students as she saw them with the bug bots and car bots.

“They are having fun,” Meyer said, adding, “I hope it sparks an interest in the sciences and technology.”

Not far away, students were able to don virtual reality headsets. By definition, virtual reality involves a computer-generated, simulated experience that gives the user the immersive feel of a virtual world.

“We have 82 different educational apps loaded on them that lets the students take virtual field trips or experience space, the space station,” Ingraham said.

Meyer said different activities are planned each day during the NLSW celebration.

“We choose fun things to do that are educational for the week,” she said.

A windmill in the rural area is reminiscent of a time long ago.

Yet inside the Lutheran school, students were looking into the future as they guided drones or wore virtual reality headsets or cheered on a robotic dog named Bingo.

Students at St. Paul's Lutheran School in rural Arlington listen during a presentation about drones.

Next to Lindi Janulewicz’s desk is a colorized photo of a Pekingese.

Chris Lichtenberg has served the public in many different roles over the years. Recently, he began his newest position as Saunders County Sheriff.

Robin Ritter appreciates it when the public shares items with people who just need a little extra help.

RWTB branching out to Brazilian Jiu-Jitsu

When he graduated from high school, James Rosenbach weighed a whopping 112 pounds.

Public encouraged to take part in 'Blooms for Hope'

Diane Wilson knows hope can come in the form a flower.

Parks and Rec department looking at monthly events in 2023

Nate Schwanke is looking forward to a year of fun activities offer through the Fremont Parks and Recreation Department.

Linda Nelson remembers the woman who wanted to file for a divorce on her own instead of hiring an attorney.

Lee Meyer hopes the public will come to Fremont Opera House to eat lunch and enjoy entertainment while benefiting the historic building.

Fremont-area calendar of events for Jan. 25-27

An American Red Cross blood drive will take place from noon to 6 p.m. Monday, Jan. 30, at the Scribner Fire Station.

For the 21st year, Nebraska State Treasurer John Murante and the Omaha Storm Chasers will sponsor the “Why I Want to Go to College” writing sw…

Exhibits are opening at area museums while there will be a variety of theater performances to check out.

Are you getting tired of the gloomy weather? This weekend's St. Cecilia Cathedral Flower Festival may brighten your spirits with scores of blooming flowers and music performances.

Couple grateful for God's healing, provision after his accident

Don Atwell was looking forward to vacation on that August day in 2021.

Don and Dinah Tenhagen were watching television in their recreational vehicle when the power suddenly went out.

See what's on the menu next week at area schools.

State Department says don't use Uber in areas around Cancun

State Department says don't use Uber in areas around Cancun

Children at St. Paul's Lutheran School in rural Arlington react to Bingo, the robot dog, who was there on Monday as part of the National Lutheran Schools Week celebration.

Young students at St. Paul's Lutheran School in rural Arlington react to Bingo, a robotic dog, on Monday afternoon as part of the observance of National Lutheran Schools Week.

Brant Abeln, left, a volunteer for Prairie STEM instructs Noelle Warm, left, and Molly Petersen on Monday afternoon during a drone flying session as part of National Lutheran Schools Week at St. Paul's Lutheran School in rural Arlington. The drone is at the upper right.