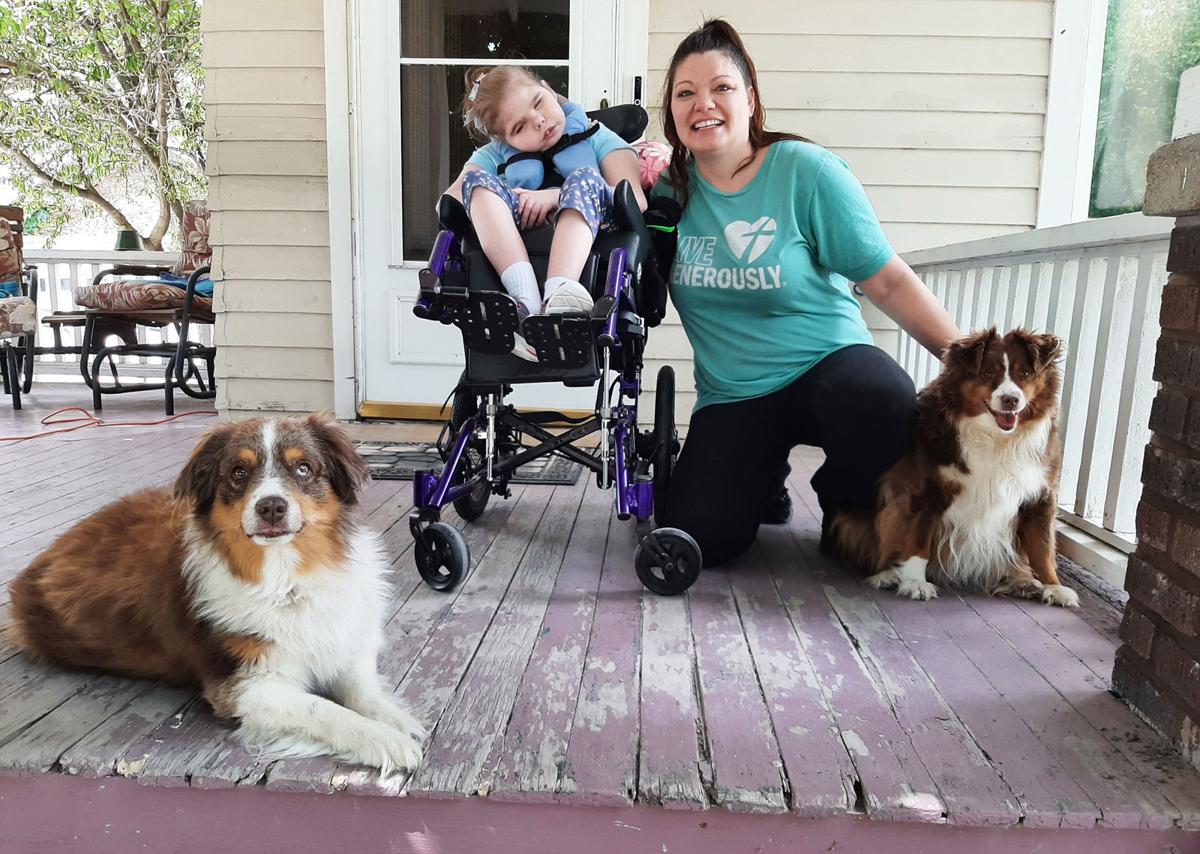 Melanie Keyser-McLain of Fremont is shown with her daughter, Alyssa Christensen, who will be 13 on June 6 and their dogs Cubbie, left, and Josie, right. 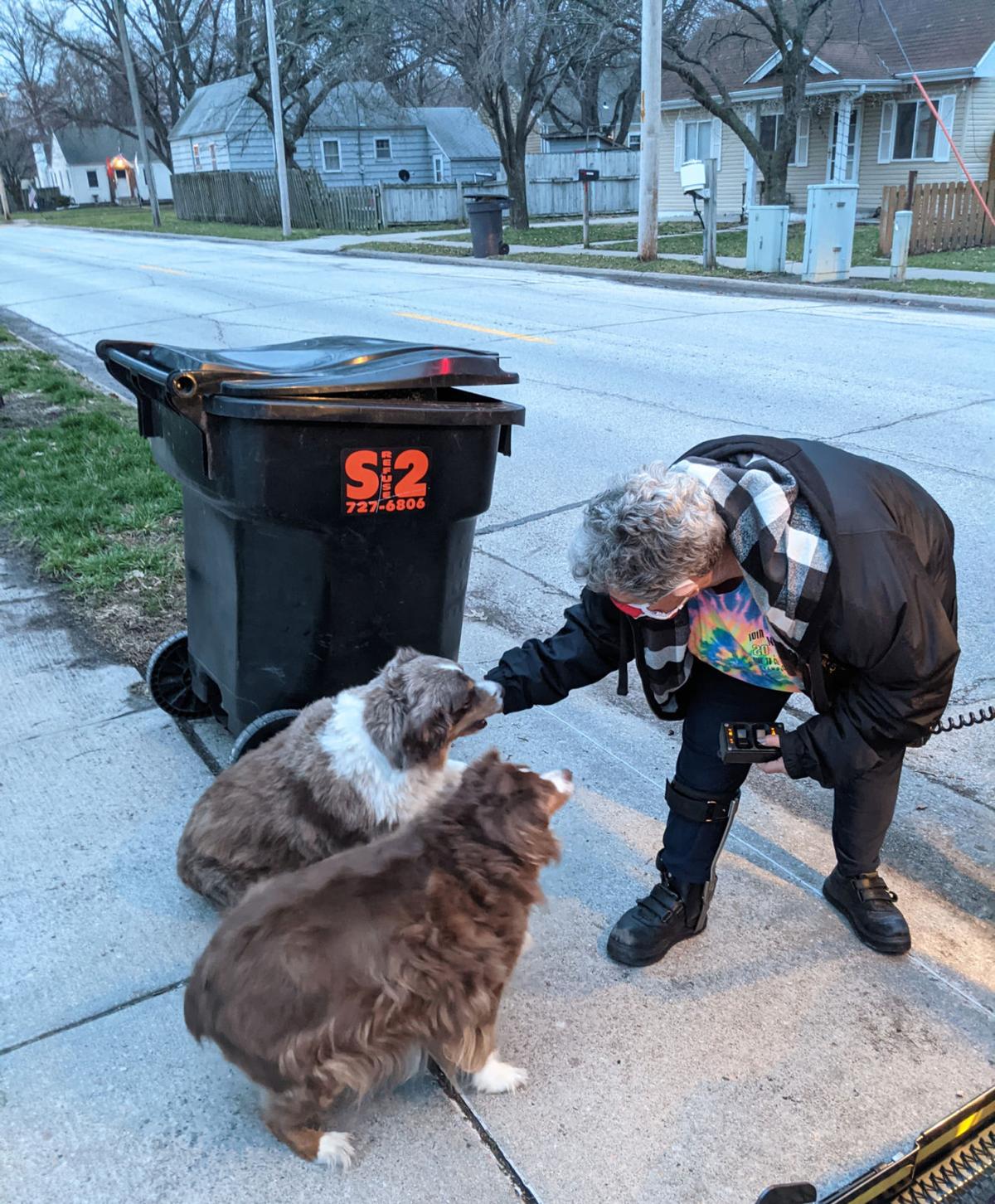 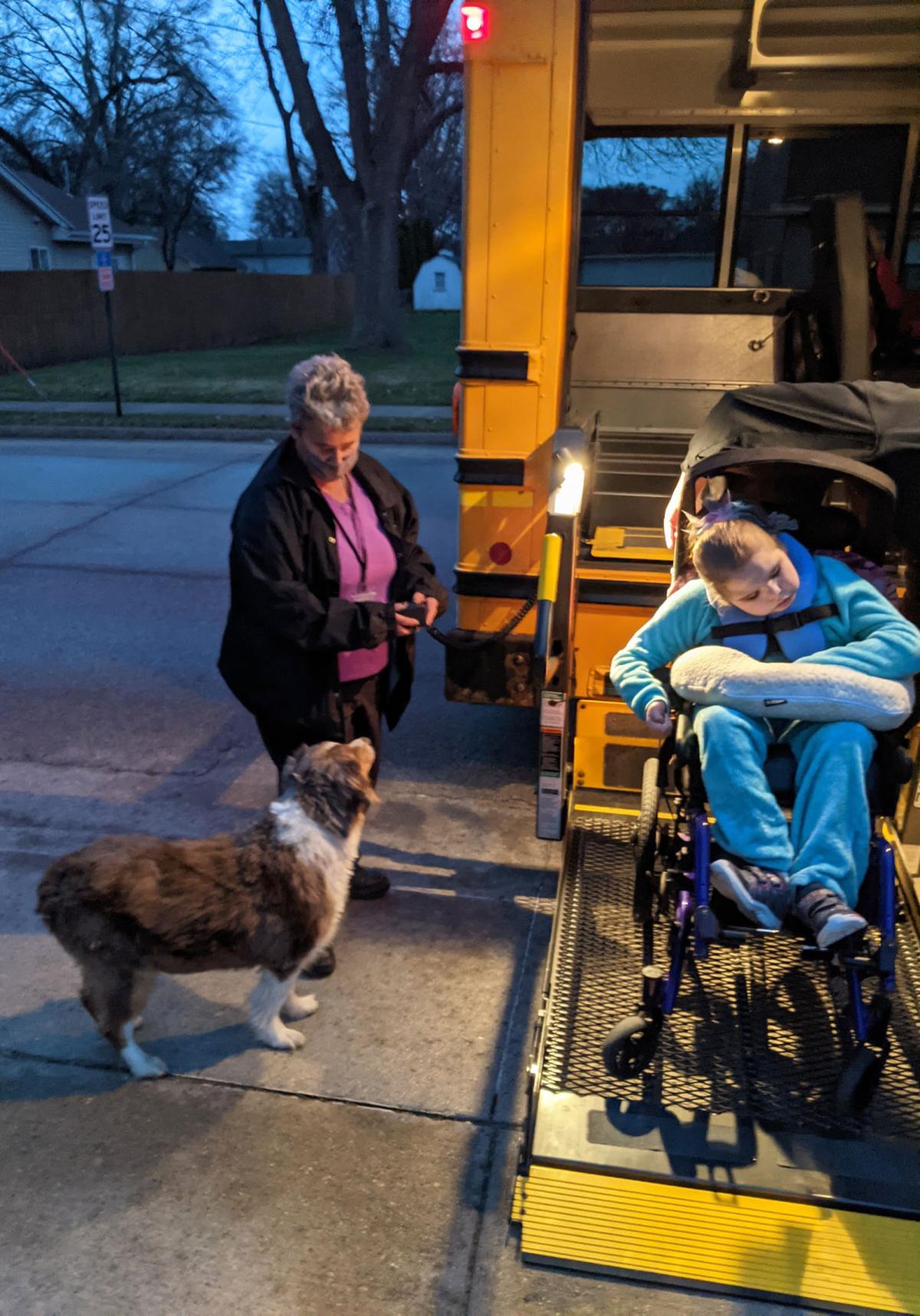 Cubbie, the dog, looks for another treat from bus aide Denise Newlon of Fremont before the local woman gets Alyssa Christensen into the bus. 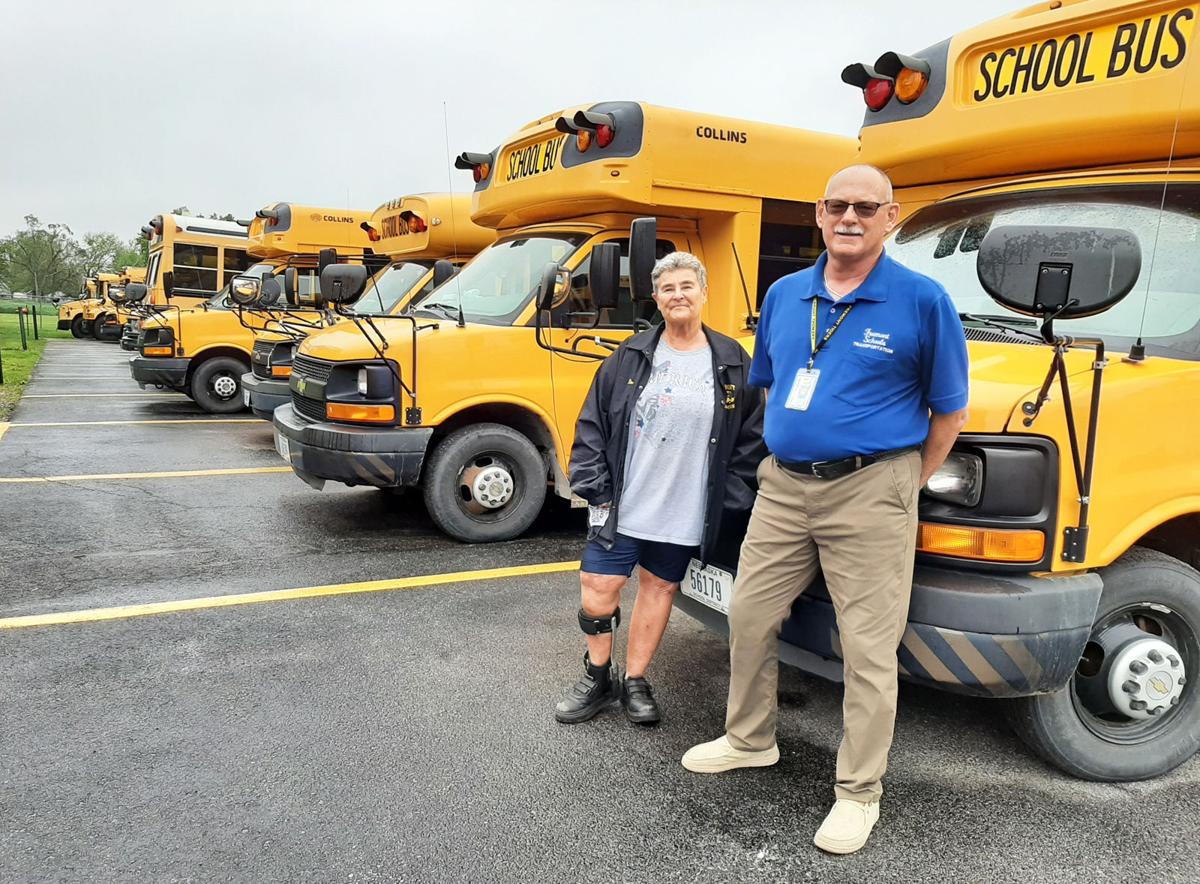 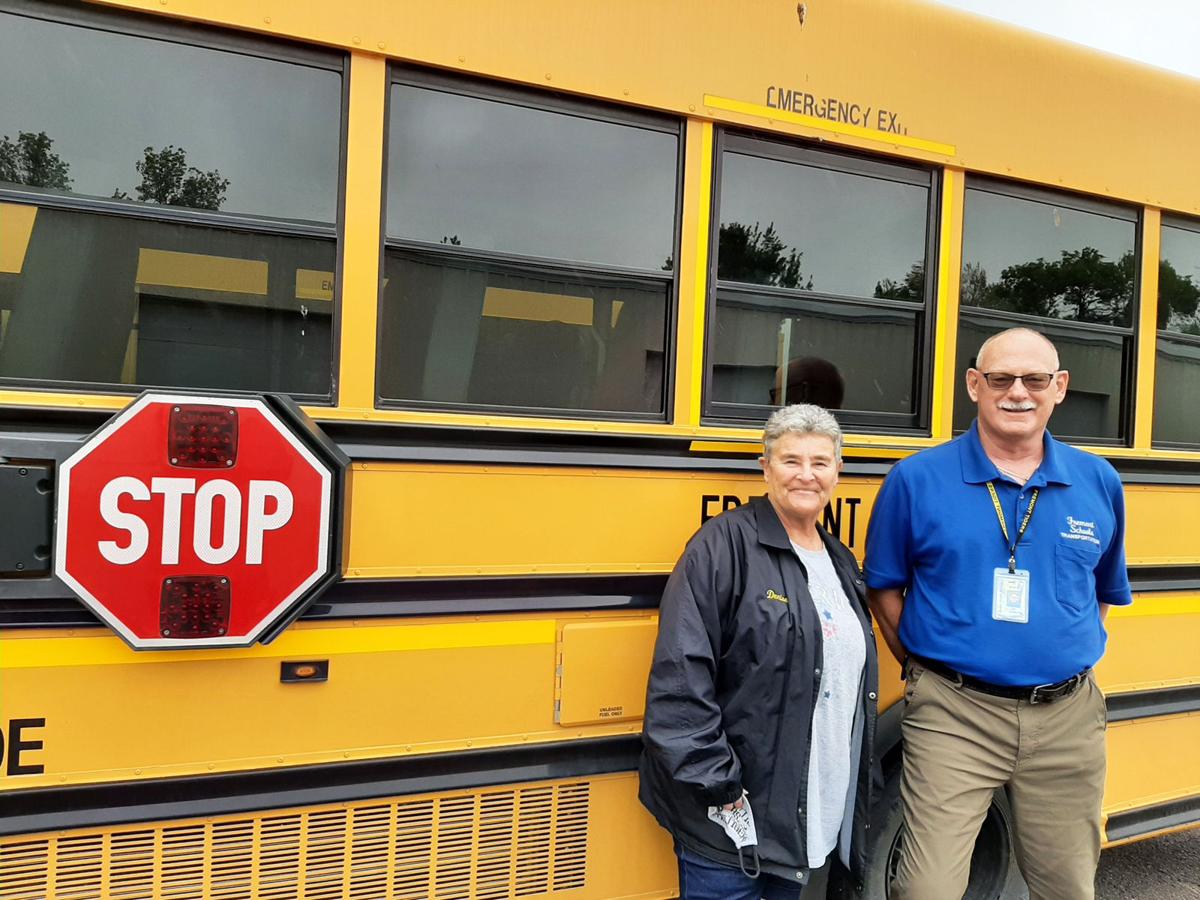 Bus aide Denise Newlon and Jeff Rump, transportation supervisor for Fremont Public Schools, stand near a bus on the last day of the 2020-21 school year.

Newlon began working as a bus aide for Fremont Public Schools during the 2020-21 school year. She worked on routes that ran in the morning, around lunchtime and after school got out.

One of those students was Alyssa Christensen, who turns 13 on June 6 and will be an eighth-grader next fall.

Alyssa is often in the hospital, but goes to school about 50 percent of the school year, said her mom, Melanie Keyser-McLain.

Keyser-McLain, who gave up nursing about eight years ago, said her daughter was born with 2q chromosomal deletion syndrome. This means part of Alyssa’s second chromosome is missing. Mothers often miscarry when this occurs, while children born have a life expectancy of 3 to 5 years, Keyser-McLain said.

Alyssa is blind and has never walked or talked. She’s unable to hold up her head and has the functionality of a 3- to 6-month-old baby.

Because Alyssa is mute, most people don’t think to talk or interact with Alyssa, her mom said.

But Newlon is different.

She talks to Alyssa like the girl’s mother does. Newlon tells Alyssa how cute she looks and that she is going to have a great day.

“Alyssa loves it,” her mom said. “Her face lights up with that interaction and I can be assured that she’s safe and she’s going to have a great day at school, because of Denise.”

Newlon expresses her fondness for Alyssa.

“I fell for her right away,” Newlon said. “She’s so innocent-looking. She just looks like a little doll.”

On cold days, Newlon has wrapped Alyssa in a bus blanket to help keep her warm and comfortable.

Newlon has tenderly cared for Alyssa whenever the girl had seizures.

“She’s making sure she’s positioned well and she’s taken care of and she’s got her neck brace on. She just really cares,” Keyser-McClain said.

Newlon tells how she’s interacted with Alyssa during seizures.

Newlon not only paid special attention to Alyssa, but to her dogs, Cubbie and Josie.

The Australian shepherds quickly learned that Newlon would come with treats.

“All I’ve got to say is ‘bus treat’ and they perk their ears up and they go out and wait patiently,” Keyser-McLain said. “They sit there and wait and then she gives them treats.”

Newlon has maintained a routine with the dogs.

“I have a bag of treats in my car and I always fill my pockets,” she said.

The dogs run to Newlon.

“I tell them to ‘sit pretty’ and they sit and I start giving them treats,” Newlon said. “I give them at least three apiece.”

“For some reason, animals like me and I love animals,” said Newlon, who has a dog named Bella and a cat named Abby.

“I just love the way she interacts with Alyssa and the dogs,” Keyser-McClain said. “It just means the world to me.”

As a mom, Keyser-McClain benefits, too.

“I don’t think she knows how much it means to me,” Keyser-McClain said. “She might be the only other adult I talk to all day.”

Before she became a bus aide, Newlon worked at the thrift store that is part of Care Corps’ LifeHouse.

“I thought I would try something different,” she said.

During the school year, Newlon made sure all the students got on the bus, marking names off a list. She helped watch them, keeping a close eye on those who might need a little extra attention.

She’s enjoyed worked with kids, who ranged in age from preschool to high school.

“She’s really nice to work with,” Newlon said. “We talk about our animals all the time. She’s got two little doggies.”

Newlon enjoys other FPS workers, too.

“My boss is awesome,” she added.

“Denise is a very good person, who cares about kids and that’s key in being a school bus aide, because we know kids can be trying at times,” Rump said. “She’s very good with the other staff members and works well with everybody. She’s very helpful with everything and kind of like another mother to us all.”

This summer, Newlon is busy at Living Word Church in Fremont.

“I take care of the bushes and the weeds and I got my own little flower garden outside where they used to have a fountain,” she said. “I do that for the Lord and for my pastor.”

She plans to return as a bus aide in the fall.

“I’ll do it next year again,” Newlon said, smiling. “I’ll keep coming back until they kick me out.”

Considering the people who enjoy her presence that probably won’t happen.

“She is the most happy, exuberant, positive woman I’ve ever met,” Keyser-McLain. “She’s always got a smile on her face.”

Angie Olson is excited that Gallery 92 West is open to the public again.

Melanie Keyser-McLain of Fremont is shown with her daughter, Alyssa Christensen, who will be 13 on June 6 and their dogs Cubbie, left, and Josie, right.

Cubbie, the dog, looks for another treat from bus aide Denise Newlon of Fremont before the local woman gets Alyssa Christensen into the bus.

Bus aide Denise Newlon and Jeff Rump, transportation supervisor for Fremont Public Schools, stand near a bus on the last day of the 2020-21 school year.