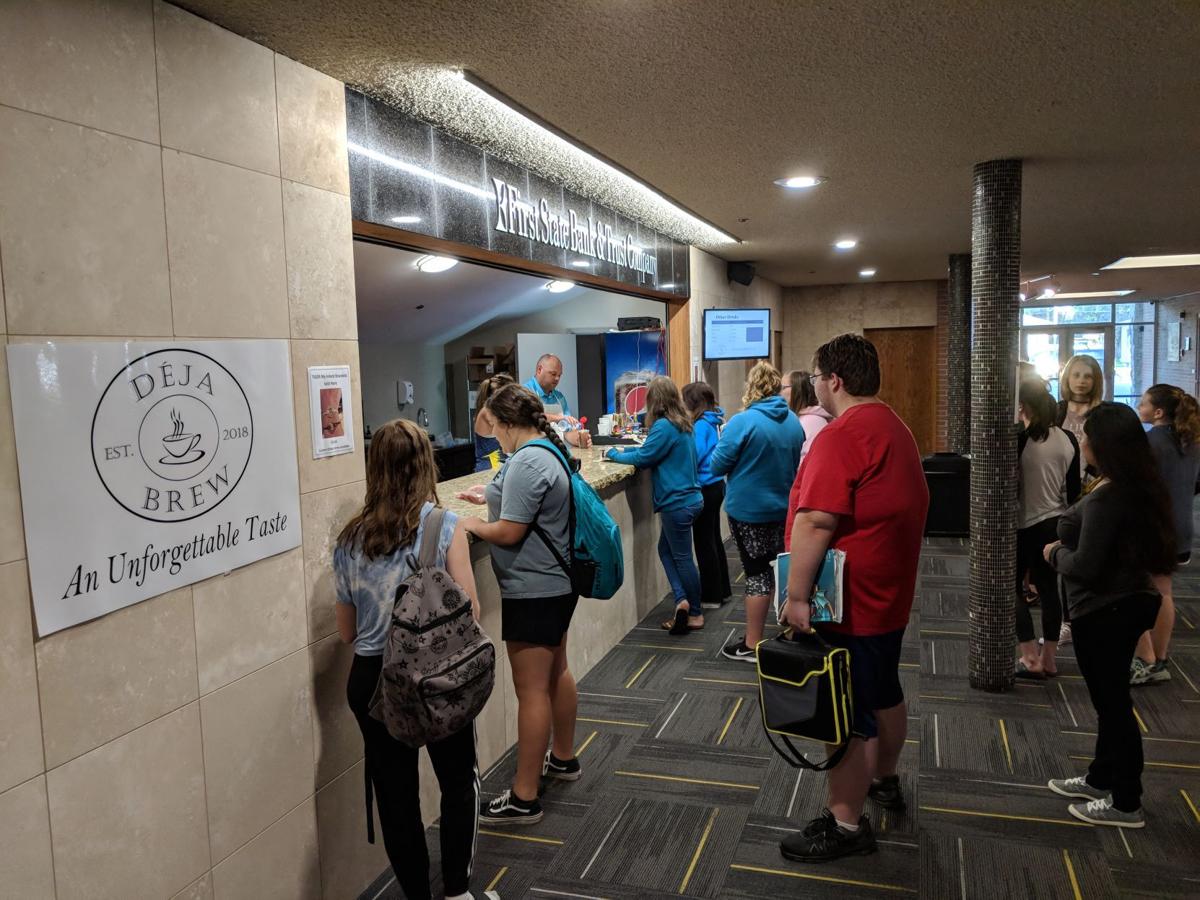 Fremont High students line up for their morning coffee at the new Deja Brew coffee shop located inside the local high school. The student-run coffee shop opened this semester after a dual-credit entrepreneurship class at FHS developed the business last spring. 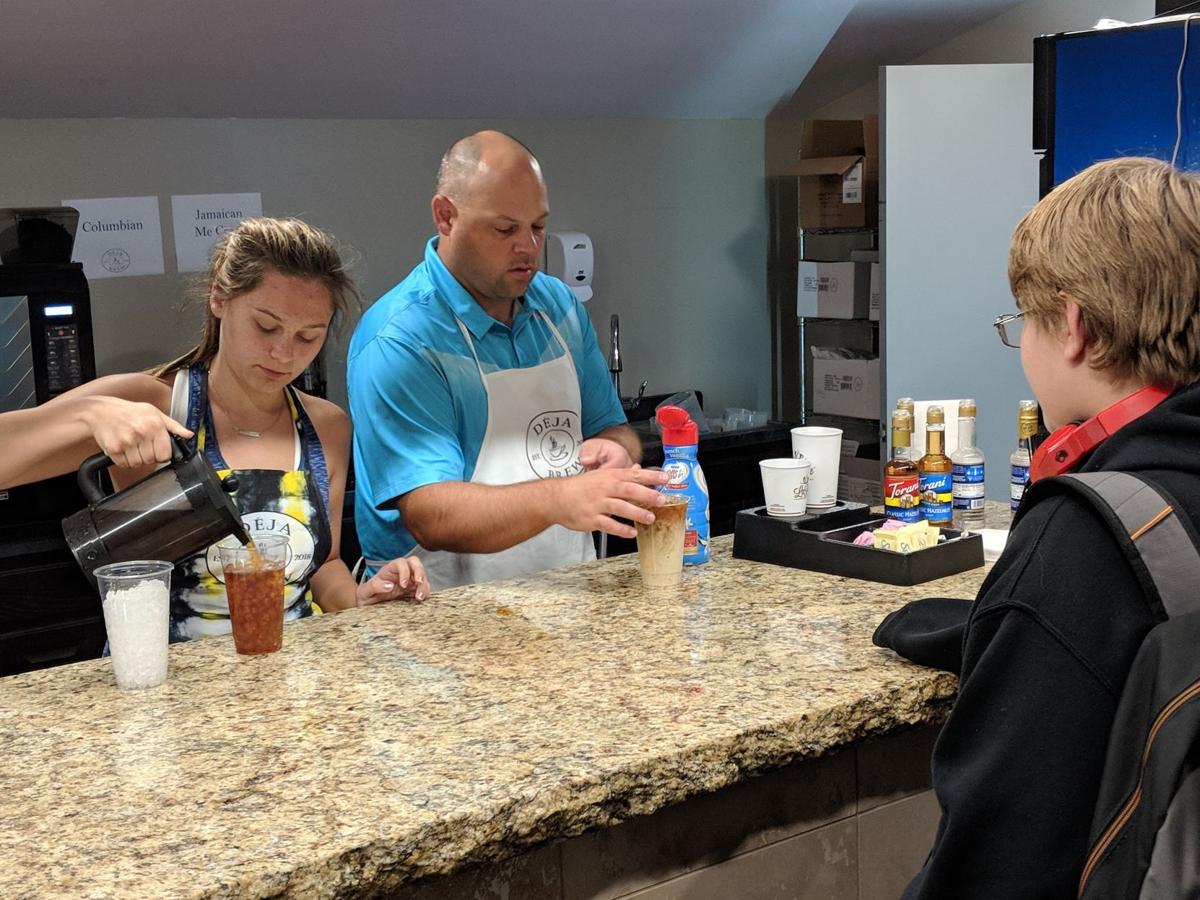 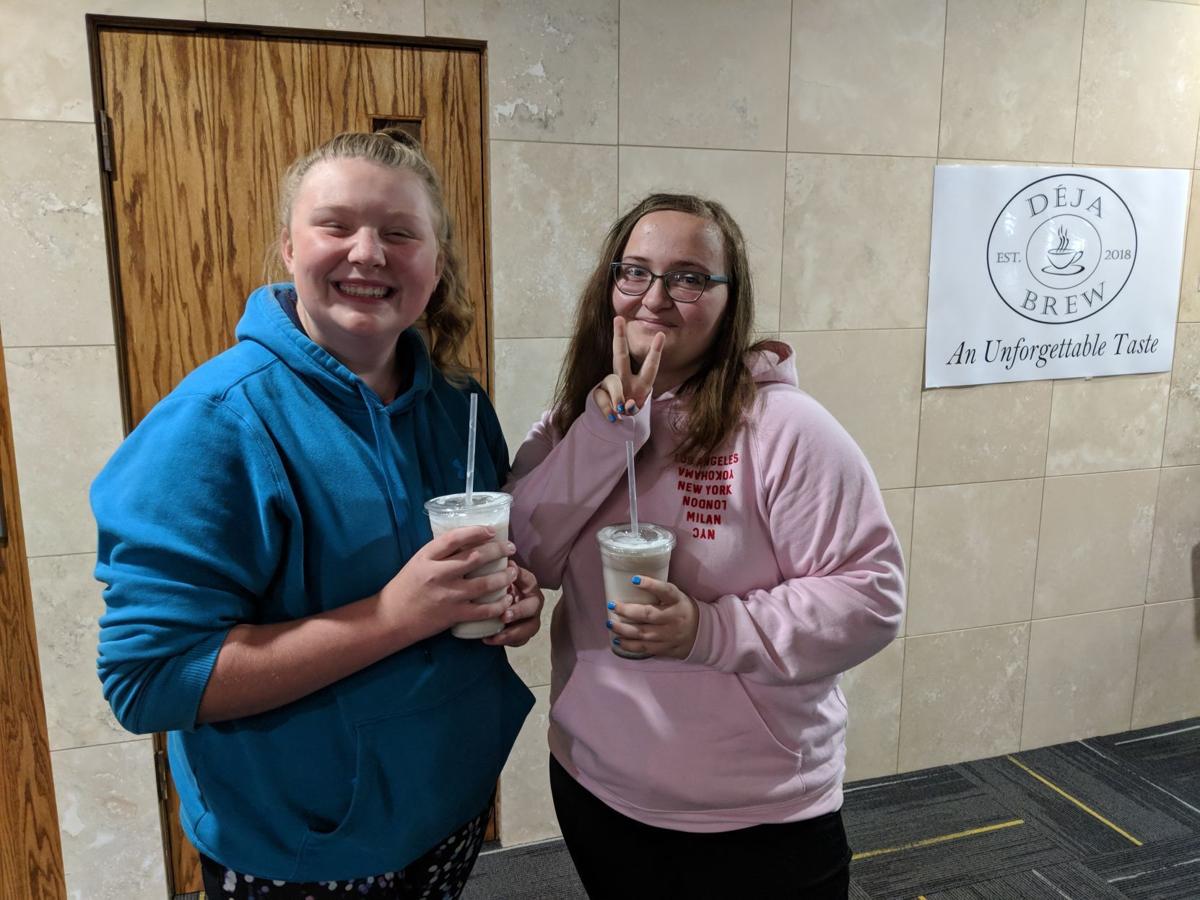 After rolling out of bed and heading into school for the day, students and teachers at Fremont High School can now get their caffeine fix without having to make an extra stop in the morning.

The school’s new student-run coffee shop, Deja Brew, has been up and running since the start of the school year and is already making a splash among educators and students at the local high school.

“I come down every morning and get my iced tea, because it’s a dollar refill,” Tina Cope, English teacher at FHS, said. “It’s what gets me through the day.”

Deja Brew currently features a staff of 10 students, mostly seniors, and is open every day of the school week from 7-7:45 a.m. before classes begin each morning.

Throughout the spring quarter last year, students in the class worked to make the coffee shop a reality in time for classes to begin again this fall.

“We came to these students with the idea, or the premise, and we let them take it and run with it,” Burg said at the time. “They’ve done a great job with coming up with all of the ideas. They named it, created the logo, marketing concept, business prospectus; every element has been done by the students.”

According to MCC instructor Dan Smith, who also taught the entrepreneurship class last spring, Deja Brew is a first for dual-credit MCC students.

“This is the first class that MCC (Metropolitan Community College) has ever had that has created a business incubator and is actually going to have a student run, student managed business,” Dan Smith, MCC instructor, said last spring.

According to Burg, many of the same students who helped create Deja Brew have continued their involvement and are now helping make the new business a success.

“Most of these kids were from the entrepreneurship class, so they really wanted to see it take off,” he said. “They’ve totally bought in, and have been great for coming in early in the morning and opening it up every day.”

Burg says the coffee shop plans on adding more student workers when the school’s second quarter begins, partly to add staff and partly because many of the current student-workers are seniors.

“Nine of the ten (student-workers) are seniors so we have to start getting some new ones trained for next year,” he said.

While the coffee shop, located in the concession stand near the Nell McPherson Theater at FHS, is open from 7-7:45 a.m. each school day, Burg says a rush of student customers usually make their way to the new coffee shop between 7:30 to 7:45.

“We get a big rush for about 15 minutes, we’re trying to get them to stop by a little earlier,” he said.

On Wednesday that pattern held true as a bevy of students lined up for one of the many caffeinated beverages offered at Deja Brew.

Two of those students were freshmen Ally Bishop and Megan Rayl.

“We come every Wednesday,” Bishop said.

The pair were enjoying Hershey’s Cookies and Crème iced cappuccinos as a treat for Rayl’s birthday.

“It’s actually Megan’s birthday today,” Bishop said. “So this is her present.”

Burg added that plans are in the works to also start selling food at the shop in just a few short months.

The shop has also added afternoon hours on Wednesdays after school.

“We get an early out and the teachers have meetings and so they get a little coffee refill and students come in for ice coffee after classes end,” he said.

Probably the first thing most people notice is the light.

The Nebraska Department of Transportation has announced that work is set to begin on Nebraska Highway 109 — and the department says to expect delays.

For over a decade Charlie Diers Ford Lincoln has been supporting area schools through the Ford Drive 4 UR School fundraising program.

Yoga and Wellness for Everyone is a monthly program offered at Keene Memorial Library. Class will be held at 7 p.m. Sept. 12 in the large meet…

Fashion show to be part of meeting

Fremont After 5 Connection will meet at 6:45 p.m. Sept. 10 in the Midland University Dining Hall, Ninth and Pebble streets.

Registration to begin for craft show

Although alcohol and exercise might not seem like good bedfellows, a new event being held at Wine Experience will provide the chance for peopl…

Fremont High students line up for their morning coffee at the new Deja Brew coffee shop located inside the local high school. The student-run coffee shop opened this semester after a dual-credit entrepreneurship class at FHS developed the business last spring.